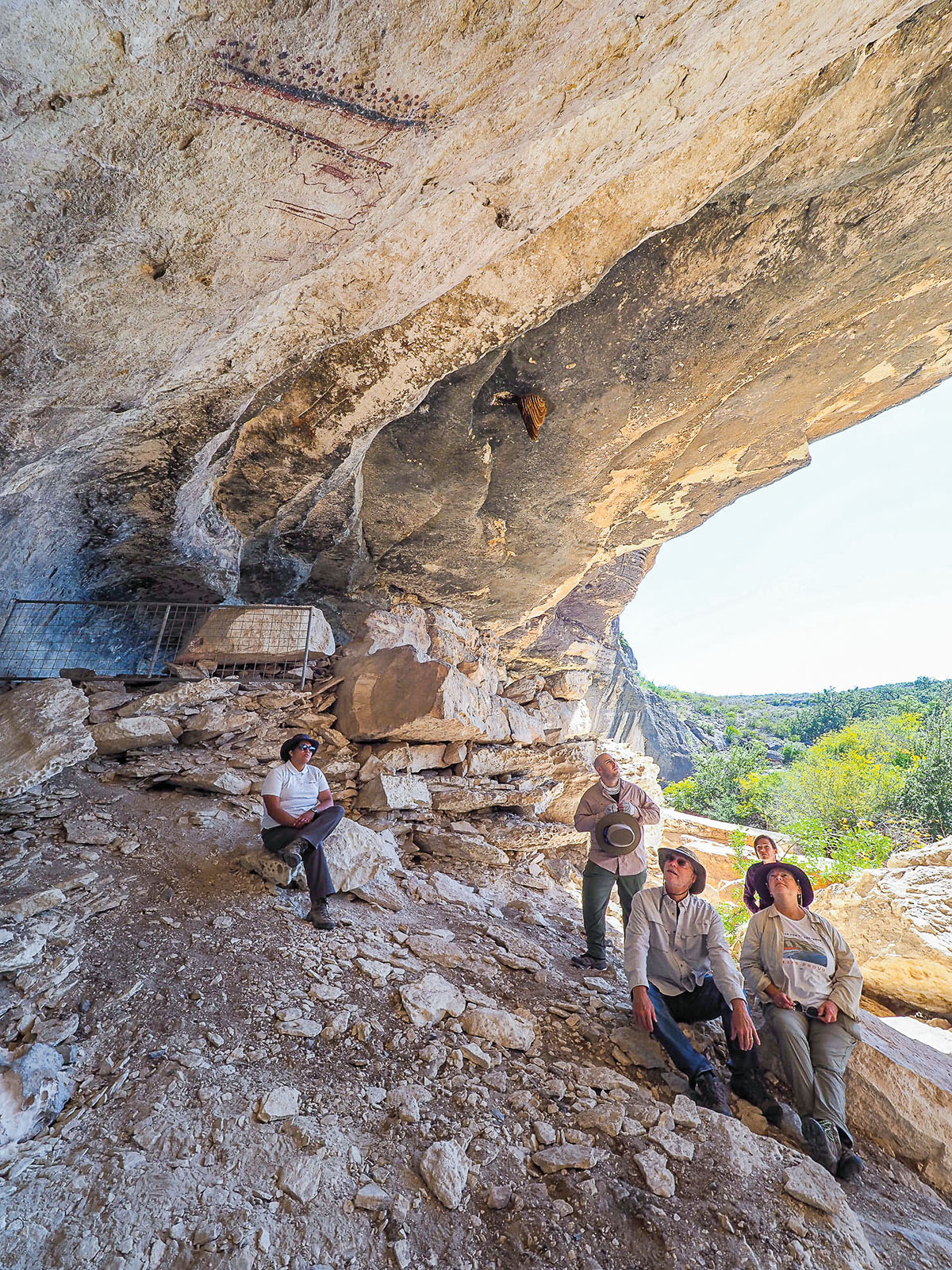 Hikers on a Shumla Trek check out Black Cave, which is home to ancient rock paintings, in Seminole Canyon State Park.

Fifteen hikers dodge a minefield of prickly pear cacti and thorny shrubs as they descend into Upper Presa Canyon in a remote section of Seminole Canyon State Park & Historic Site, bordering the Rio Grande in Southwest Texas. The hikers round a pair of boulders in the bottom of a dry creekbed, then look up. In front of them, the wide stone jaw of a rock shelter gapes open, revealing limestone walls decorated with squiggly lines, dots, and human figures painted in rich hues of red, yellow, and black.

This is Black Cave, one of more than 300 documented rock art sites in the rugged canyonlands of Val Verde County. The group has hiked here as part of a new series of “Shumla Treks” on public and private land organized by Shumla Archaeological Research and Education Center. Formed in 1998, the Comstockbased nonprofit preserves and studies rock art in the Lower Pecos Canyonlands.

“The longer you stare, the more and more things you see,” says Vicky Roberts, a Shumla archaeologist who is guiding the hike. She explains the site got its name from the darkened ceiling of the shelter, likely discolored over time by smoke from campfires and organic growth.

The group listens raptly, then scrambles up limestone slabs and mounds of rubble to get a closer look. Some of the artwork covers the cave’s 40-foot ceilings, suggesting the ancient people who painted it used scaffolding to reach their rocky canvases.

Shumla began offering the daylong guided hikes last year to educate the public about Texas’ oft-overlooked treasure trove of rock art. The outings also raise money for projects such as a recent four-year effort to take high-resolution photographs of more than 230 rock art paintings. Shumla hopes future generations of scientists will be able to use the images to study the rock shelter sites long after the paint has faded.

“It isn’t until you start exploring down in the canyons that you really get a sense of how magical this place is and why people have continued to exist in such a desolate area for so long,” says Roberts, who has since left Shumla. “We have something rare and special simply because the environment happened to be just right for their preservation, but time is running out for some of the sites.”

Archaeologists say ancient hunter-gatherers created these paintings starting at least 4,000 years ago to record rituals and stories. Highly mobile groups of people have lived in the region for more than 10,000 years, surviving on small game, such as rabbits, and fish and other resources provided by three rivers—the Devils, Pecos, and Rio Grande.

“They weren’t just doodles on the wall, which is how people used to perceive it,” Roberts says. The artists used paint made with crushed minerals—such as manganese, iron oxide, and calcium—mixed with animal fat, likely from deer. Such fat was also a valuable, calorie-dense part of these people’s diets. “It would have taken a great deal of effort,” she says. “That’s a big sacrifice for something they obviously felt had great importance.”

This fall, archaeologists from Shumla Archaeological Research and Education Center will lead a series of daylong Shumla Treks to rock art sites on both public and private land in Val Verde County, west of Del Rio.
Treks are scheduled for Sept. 3, Sept. 4, Oct. 7, Oct. 22, Oct. 23, Nov. 5, Nov. 6, Nov. 19, and Nov. 20. For the cost of $160 per person, participants get to hike with experts who share information about the latest archaeological discoveries and explain how modern science is playing a role in studying the cultures that made the elaborate panels.
Treks are limited to 25 people. Participants should bring their own lunch, water, and sunscreen, and be prepared to hike over rough terrain. Each hike is rated on a difficulty scale of one to five, and some are strenuous. Most of the hikes start and finish at Shumla Headquarters, 28 Langtry St. in Comstock. After the hikes, participants can tour Shumla’s plasma oxidation laboratory, where scientists prepare rock art samples for radiocarbon dating. A portion of the proceeds from the Shumla Treks is used to fund rock-art preservation efforts. shumla.org

Katie Wilson, a resident of Del Rio, which is about 30 miles southeast of Comstock, has participated in three Shumla Treks since last year. She identifies with Shumla’s intent to humanize the history of the rock art. “You get to learn so much about the environment, the people who lived here, their art, and their worldview,” she says. “You’re experiencing their world. I’ve never been anywhere else like this in America.”

Archaeologists believe the images on the walls may have also contained information to help people navigate the Chihuahuan Desert. “While life here would not have been easy by any means, people equipped with the knowledge to understand their surroundings could certainly survive and thrive,” Roberts says. 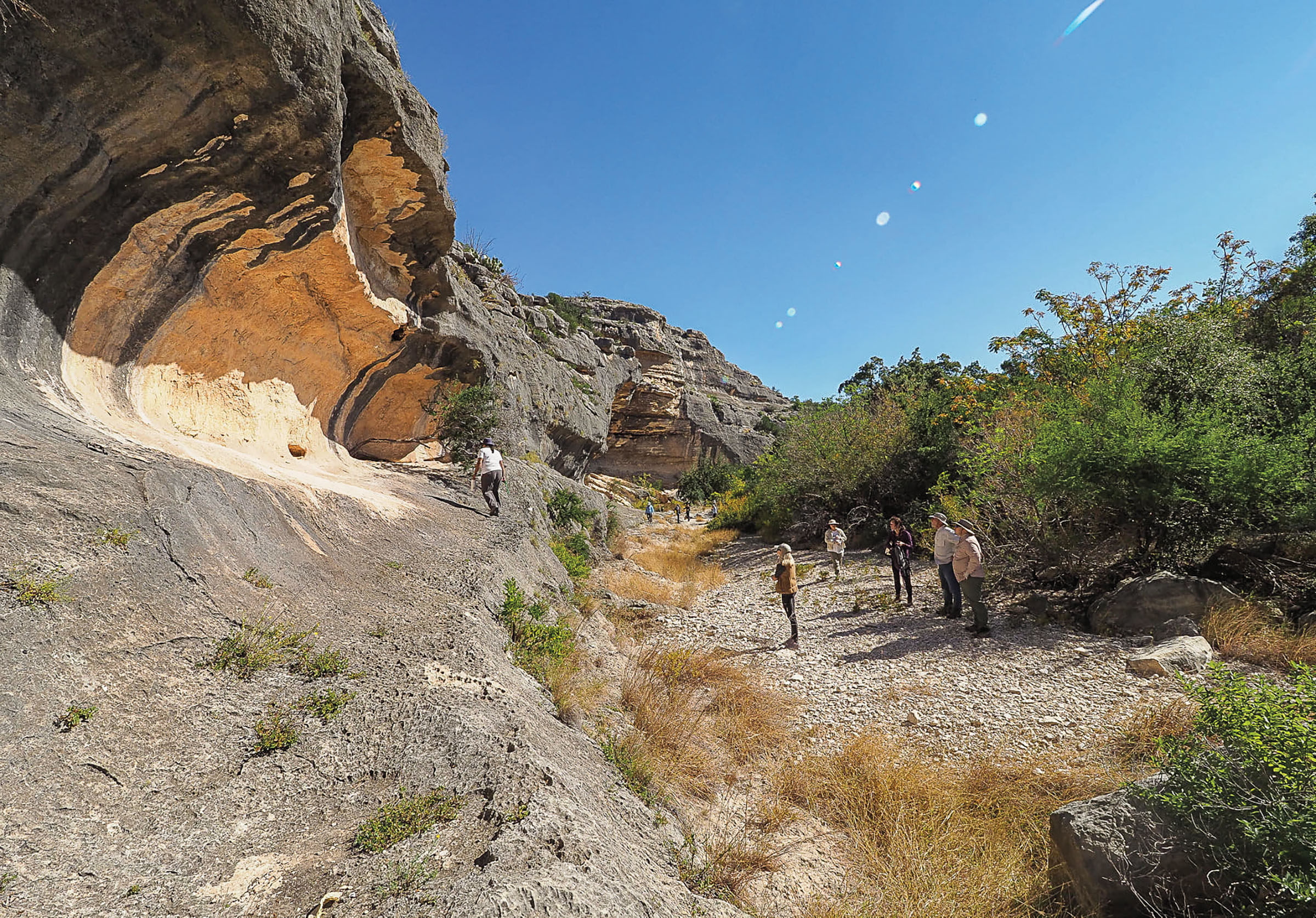 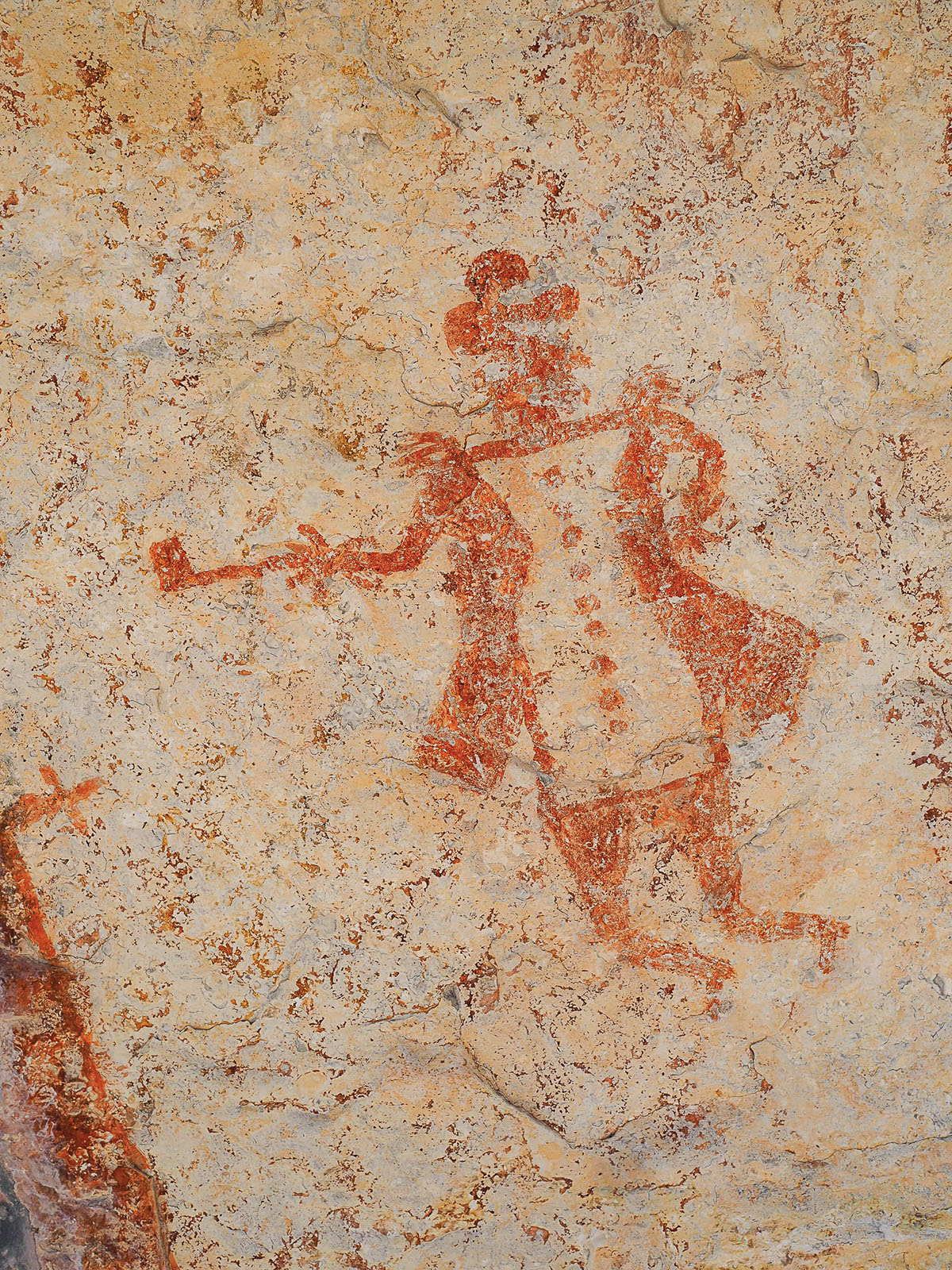 A painting at the Vaquero Shelter. 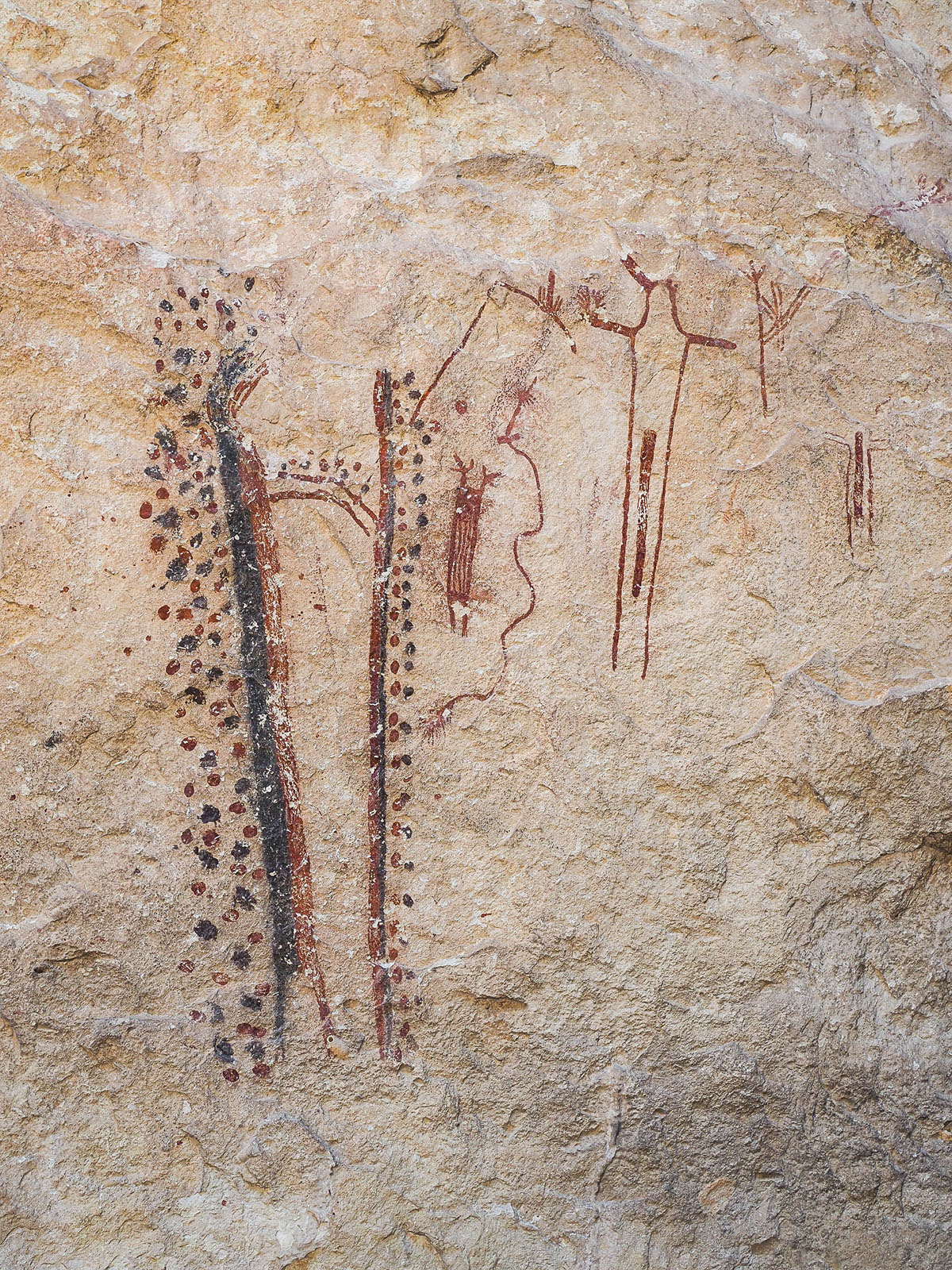 A painting at Black Cave.

Shumla is working to raise awareness of the rock art in part because the relics are slowly being erased by natural and human forces. For example, floodwaters washed debris into some rock shelters in 2008 and 2014, scouring the paintings. When the muddy water receded, it left behind a layer of silt. Centuries of exposure to wind and humidity are also causing the limestone walls to flake away. Humans have caused damage as well by defacing some of the murals with graffiti or scratching.

During the hikes, archaeologists interpret the sites and explain what researchers know about the Indigenous cultures of the past. “This gives people an opportunity to experience it in a way they probably normally wouldn’t,” Roberts says. “They get to see it from my perspective as a researcher who’s actually done the field work out here.”

Not every Shumla Trek is the same. Different tours highlight different types of rock art found in the region. The oldest and most common of the paintings, known as the Pecos River Style, feature multicolored motifs with vaguely human and animal shapes and geometric designs. Examples include the Fate Bell Shelter at Seminole Canyon State Park and the nearby White Shaman site.

Other rock art types are Red Linear Style, which often features tiny stick figure hunters; Red Monochrome Style, which is pictographs of life-size hunters and animals; and Historic Period Style, which reflects the presence of Europeans.

The Vaquero Shelter, also in Seminole Canyon State Park, is a prime example of the Historic Period Style. Here, water has carved the sides of a creekbed into a long, smooth overhang. The paintings depict riders on horseback, a Longhorn cow, a mission, and a soldier in Spanish uniform. Roberts says these paintings could have been made in the 1700s— possibly by Comanche or Apache people—much more recently than the artwork in Black Cave. But some Vaquero Shelter paintings overlap much older pictographs on the same walls that date back several thousands of years.

Chris Meachum, a hike participant from Fort Worth, stands silently in front of the paintings, taking it all in. “Just the experience of being ‘in situ,’ in the place where this stuff has existed since it was created, for me is a profound experience,” he says. “Most of the time, you’re separated from it. If it’s antiquity, it’s probably in a museum. To see this rock art in the place it was created is pretty amazing.”