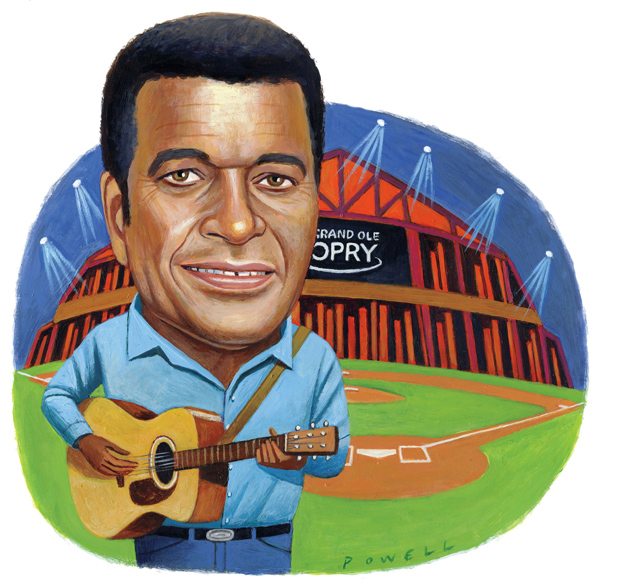 Charley Pride moved to Dallas for the same reasons that people have flocked to the city for generations: He was chasing a dream, and Big D provided easy airport access. That was in 1969, when Pride’s fledgling career in country music was gaining altitude.

Keep up with Charley Pride’s upcoming performances and other news at charleypride.com.

RCA had recently signed him to a contract—the first such opportunity for an African American country singer with a major label—and his single “Just Between You and Me” was soaring at the top of the country charts. With a busy schedule of concerts across the nation, Pride found that Montana, where his young family had lived for about 10 years, was too remote to sustain his career.

Charley Pride has never been one to sit idly by when his dreams are at stake. One of 11 children born into a sharecropping family in Jim Crow-era Sledge, Mississippi—a “Mississippi Cotton Picking Delta Town,” as he later sang—Pride decided as a boy to build his future elsewhere. Most of us know him as a country star, but Pride originally seized on baseball as his ticket off the farm. In his 1994 autobiography, Pride, he recounts playing his way into a position with the Negro American League’s Memphis Red Sox at age 16. It was one of many stops during a 12-year career with various Negro League and minor-league teams, including a stint with the El Paso Sun Kings.

On baseball road trips, Pride would sing to entertain his teammates, drawing on the Hank Williams and Roy Acuff tunes he learned from listening to The Grand Ole Opry with his family. Baseball eventually took Pride to Montana, where he worked in a smelter and played for its company team. Before games, Pride sang the national anthem, and after hours he sang in saloons. In 1962, a local DJ arranged for Pride to meet country star Red Sovine, who was in Helena for a concert. Impressed with Pride’s talent, Sovine connected him with a Nashville studio, where the young singer cut a demo tape.

Fifty-some years later, Pride and his wife of 60 years, Rozene, live in Dallas. When he’s not traveling the United States, Canada, and Europe for his roughly 35 shows a year, Pride likes to root for the Texas Rangers, of which he’s a minority owner. The Country Music Hall of Famer released a new album, “Music in My Heart,” last summer.

Q: What was it like being an African American singer in country music in the 1960s?
A: I’ve always been accepted. For example, Ernest Tubb brought me on The Grand Ole Opry in 1967, and I didn’t join the Opry until 1993. Now, most people say, ‘Well it’s about time they let you join.’ The first thing they think of is the pigment. But I’ve had a standing invitation to be on the Opry ever since 1967. Back then, my manager said I don’t think we want to do that because it’s 26 Saturdays a year and that’s some of the best days to go make your money. They only paid $8 a song back in those days, so I didn’t argue with him at all. In 1993, my wife said, ‘Why don’t you join now?’ So I joined in 1993. But it wasn’t because of the pigment.

Q: Who were some of your influences from a singing standpoint?
A: All of them. And I’m not just giving you a broad-brush answer. But the thing is, most all of my peers were really all for me making it in this business.

Q: Willie Nelson was a supporter; he famously gave you a kiss?
A: Yes, that’s true. Faron Young, Bill Anderson—all of them.

Q: How come you picked music over baseball?
A: It picked me. I always sang. There were eight boys and three girls, and we always sang. When I was trying to get in the majors, they didn’t have but 16 clubs. If you didn’t make it by 18 to 25, they cut you off. Of course it ain’t that way now because they’ve got 30-something teams. I’m not making excuses. It’s just different. I was pretty good.

Q: How much of your time do you spend traveling and touring these days?
A: Not as much as I used to, but quite a bunch. I just have to turn down so many more than I did before. I’m trying to pick my dates and do the special ones that I like to do and not the ones that I don’t.

Q: Any favorite venues in Texas?
A: I’ve played ’em all. All the little ones, even back before I got started good. I’ve played Texarkana, Big Spring. And then I moved up to the bigger ones like San Antonio and Austin. I have the distinction of being the first artist to sell a million tickets at the Houston Livestock Show.

Q: Where do you like to go out to eat?
A: El Fenix Restaurant [in Dallas]. I had never eaten any Mexican food until I moved here, and I said, ‘Well I’m not Mexican, I’m not going to eat Mexican food.’ But my wife took me, and now I’ve been addicted for the last 40 years.

Q: How did you choose Dallas in 1969?
A: I was living in Montana, and my career got to the point that if I missed a flight, I’d miss a whole bunch of dates. It was right smack-dab in the middle of the civil rights movement, and we didn’t want to go to Nashville. It was only 270 miles from my [childhood] home to Nashville, and I didn’t want to take my three kids back to where I grew up in that kind of culture. Dallas fit everything that I needed with my kids going to school, and getting in and out to various places in the world. We couldn’t find a better place. And it worked out fine.