Theaters Under the Stars

The Drive-In is Back 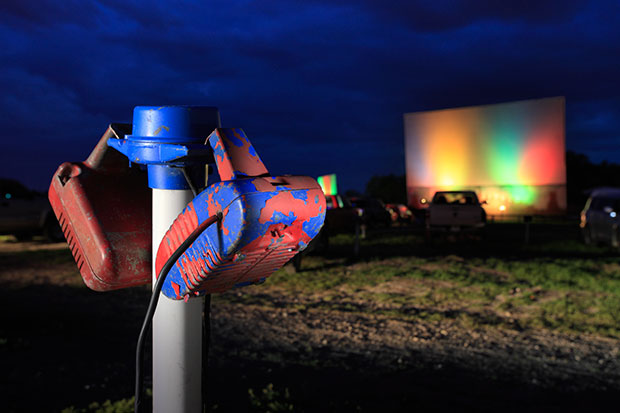 A scene from Ennis’ Galaxy Drive-In

Just after sunset under a wide-open Texas sky, a colossal outdoor movie screen towers over a sea of cars. In the fading light, the glow of colored bulbs and neon tubes lights the way to the obligatory snack bar, and a light breeze carries the irresistible aroma of fresh popcorn and deep-fried delights like corn dogs and funnel cake. It’s an experience you won’t find anywhere else. Welcome to the drive-in.

Moviegoers at the drive-in forego the air-conditioning and stadium seating of the brick-and-mortar cinema for the freedom of watching a movie in their cars, beneath the stars. Some hunker down in the front seat, while others get cozy with blankets and pillows atop air mattresses in the beds of their pickups. At some theaters, moviegoers ditch their vehicles to kick back in reclining lawn chairs or on picnic blankets. Kids play on a nearby swing set, linger around the concession stand, or throw a football around until showtime.

As the sky darkens and the stars begin to twinkle, the projector flashes on, bringing the screen to life. And so the show begins.

For some moviegoers, a trip to the drive-in is a cruise down memory lane and a chance to share the open-air movie experience with their children. For those new to the concept, the drive-in is a novel yet nostalgic way to catch the latest Hollywood blockbusters.

By most accounts, the first drive-in theater opened in Camden, New Jersey, in 1933. From the mid-1930s through the 1950s, drive-ins spread across the country; according to the United Drive-In Theater Owners Association, there were more than 4,000 drive-ins across the United States during the industry’s heyday in the late 1950s. Texas alone boasted almost 400. Today there are fewer than 20 drive-ins left in Texas (and roughly 340 in the entire country), but those numbers are rising as a new generation of moviegoers discovers their appeal.

Aside from such technological advances as digital projectors and 3-D movies, the drive-in experience hasn’t changed much over the years. We’ve picked eight Lone Star drive-ins, each with their own character and charm, to seek out this summer. Enjoy the show!

In Granbury, it seems, just waiting for the drive-in to open is half the fun. On any given Friday or Saturday, cars full of eager moviegoers start lining up outside the Brazos at least an hour before the gates open. Before long, cars are parked up and down West Pearl Street, while locals gab and kids play in the Brazos’ grassy area near the entrance. In the middle of it all, the movie screen towers over the trees just one mile from the historic downtown courthouse square.

Dating to 1952, when most cars had flashy chrome, fins, and bench seats, the Brazos hasn’t changed much in the ensuing decades. The original popcorn machine still works, and cars still fill the spots on weekends to enjoy a show on the Brazos’ single screen.

Families keep coming back, even through the generations. “I remember watching a movie here when my daughter was a newborn,” says Granbury resident Cathy Bauer. “Now she brings her daughter here.”

With 1950s speakers, a pet-friendly policy, and a lineup of independent films, 1980s favorites, and modern cult classics like Grease and Raiders of the Lost Ark, the Blue Starlite Mini Urban Drive-In fits perfectly with Austin’s “retro-is-new” character and food-truck culture. In fact, the Blue Starlite’s rehabbed-RV concession trailer offers treats like hot dogs, brownies, and something you might not expect—a kit to make real s’mores (including marshmallows and wooden skewers) at the drive-in’s fire pit.

The Blue Starlite launched as a small-screen outdoor theater in an east Austin alleyway in 2010. Today, you’ll find the theater on the grounds of Austin Studios in the new Mueller neighborhood, with out-of-state locations in Florida and Colorado.

A sweeping vista of rolling wheat and cornfields comes into view as you near New Braunfels’ Stars & Stripes Drive-in. You can’t help but notice its tall neon sign and three stark white movie screens rising up in the middle of this rural setting.

As the sun sets, cars cruise the rows to find the best movie-viewing spots. The Stars & Stripes Fifties Cafe becomes the focal point of activity as hungry moviegoers line up for eats and treats. A sleek mid-century design with a glass wall, classic diner booths, and globe pendant lights gives the café a retro feel. Outside, strands of lights illuminate the covered patio and playground with a warm glow.

It seems fitting that owner Ryan Smith would get into the drive-in business. Smith grew up hearing stories about the popular Sky-Vue Drive In in Lamesa, which his grandfather ran for many years. With theater life in his blood, Smith opened the first Stars & Stripes in 2003 in Lubbock, followed by this New Braunfels location in 2015. 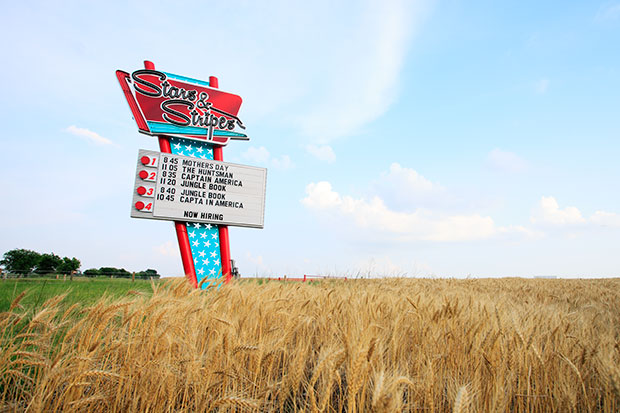 In the setting sun, it’s hard to miss the Showboat’s neon signage and “chasing-light” marquee shining like a beacon on FM 2920, 40 miles northwest of downtown Houston. On busy summer nights, 800 cars pack in to catch the latest family-friendly, first-run flicks on one of two screens.

Hungry moviegoers hit up the snack bar to chow down on goodies like chili-cheese hot dogs and chicken strips. Another reason to visit the concession stand are the vintage arcade games and the two massive 1940s RCA Mighty-Ninety Arc Lamp projectors on display in the center of the lobby.

The Showboat opened in March 2006, and the owners plan to open a second location in Pearland in the summer of 2017.

Open since 1950, The Last Drive-In Picture Show is not only one of the nation’s oldest surviving drive-ins, it’s also one of the few “mo-ped” theaters (allowing both cars and pedestrians) in the United States. Another twist: You can catch first-run feature films under the stars or in the air-conditioned comfort
of a 200-seat cinema.

There’s a third viewing option, as well: You can also experience the drive-in movie from an indoor viewing room called “The Box,” which provides theater seating behind a wall of windows with a commanding view of the drive-in screen.

As a teenager, owner Gene Palmer began working at the drive-in—then named the Circle S Drive-In Theater—the year it opened. In 1964, he bought it, and in 1990, he changed the name to The Last Drive-In Picture Show. In 2003, Palmer restored and modified the neon marquee from the defunct Tem-Bel Drive-In Theatre in Temple and installed it at his theater. It shines as an homage to the drive-in theater’s golden age and to a tradition he’s proud to carry into the 21st Century.

A whimsical theme meets the latest in high-tech 3-D cinema at the Galaxy Drive-In, just 30 miles south of downtown Dallas. A kitschy marquee with crooked lettering reading “GALAXY” and colored flashing lights mark the entrance, and a life-size giraffe and cluster of illuminated palm trees draw your attention to the Galaxy’s 18-hole miniature golf course.

Car speakers from the 1950s and a snack bar painted with retro hamburger and popcorn designs suggest that you’ve traveled in time to 1958—yet the Galaxy opened in 2004. On busy weekends, up to 1,500 carloads of moviegoers pack into the Galaxy to watch first-run films on seven screens.

Opened during the height of the drive-in craze in 1956, the Town & Country was once one of seven drive-ins operating in Abilene. To set themselves apart, the T&C went big—becoming Texas’ largest drive-in at the time with capacity for 1,475 cars.

Families and couples arrive well ahead of the movie to enjoy the Coyote Drive-In’s breezy open-air patio and spacious beer garden—a central hub with picnic tables under a corrugated steel roof.

The Coyote is located just north of downtown Fort Worth on a bend in the Trinity River called Panther Island. With commanding views of the Fort Worth skyline, people enjoy live music as they line up at the bar for wine and beer. The focus is on local craft beers like Fort Worth’s own Rahr & Sons and Martin House Brewing Company.

To satisfy your hunger, hit up the “Canteen,” which offers classic eats like burgers, fries, and Frito pies. And if concession fare doesn’t float your boat, the theater rotates food trucks with treats like duck quesadillas, tacos, and barbecue.

One tip: Come early. “When we’re busy, there will be a line of cars all the way down the street to the courthouse,” says General Manager Reagan Noble. “So get here early to find a good parking spot and enjoy the food and drinks.”

Look out for the Coyote’s newest location opening in Lewisville this summer.