The enduring artwork of Luis Jiménez

Written by Lois Rodriguez, Photographs by Will van Overbeek | From the September 2014 issue | Updated: July 10, 2020 | Filed Under: Culturemade in texas 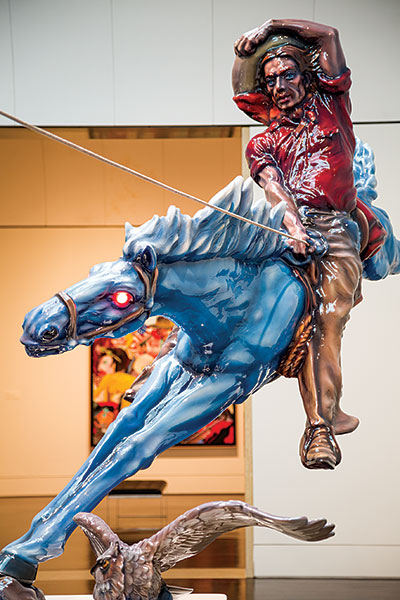 The paintings of the three great muralists kindled Jiménez’s creative streak, which later blazed into a career as a renowned artist, one of the first to bring Mexican-American art to the attention of the mainstream art world. Best known for his polychromed fiberglass sculptures, the late artist explored multicultural, working-class themes in his work, including Mexican and Mexican-American culture and mythology.

Jiménez was born and raised in El Paso, where he honed his natural artistic ability by helping in his father’s electric and neon sign-making shop. After graduating with an art degree from the University of Texas at Austin, he continued his studies in Mexico City. In 1966, Jiménez headed for New York, where he first grabbed the art world’s attention with a guerilla exhibit, placing his work in the renowned OK Harris Gallery when he found it empty between shows.

Where to view Luis Jiménez Art

“He was an American artist who never forgot his Mexican heritage,” says Susan B. Jiménez, Luis’ widow. “Because he came of age in the ’60s in New York, a lot of his fundamental work was around the country’s social issues of the time.”

After five years building his career in New York City—including an exhibition at the Whitney Museum of American Art—Jiménez headed back to the Southwest, eventually establishing a studio in an old schoolhouse in Hondo, New Mexico. There, he continued to work, receiving commissions and exhibiting at museums and galleries, until he died at the age of 65 in 2006, the result of a tragic studio accident.

A number of Jiménez’s distinctive sculptures are on display today in his native state. Plaza de los Lagartos (Plaza of the Alligators), installed in El Paso’s San Jacinto Plaza in 1995, re-creates a scene from the artist’s childhood. From 1889 to 1965, alligators lived in a plaza pond, fascinating the young Luis. His sculpture of four cavorting gators, one flailing upwards with its stubby front legs outstretched as if beseeching the desert for water, is currently undergoing conservation, with reinstallation anticipated early next year.

Created shortly after his return to the Southwest, End of the Trail (with Electric Sunrise) is in the Chemistry and Computer Science Building at UT-El Paso. The fiberglass sculpture portrays a Native American slumping forward on his horse; the sunset under the horse is illuminated by 1930s marquee bulbs. Satirizing 19th-Century American art and literature that predicted the demise of Native Americans, the piece is one of several of Jiménez’s works that challenge traditional Western myths.

Versions of the artist’s brightly colored 1990s sculpture Fiesta Dancers stand outdoors at UT-San Antonio’s University Center and near Cougar Woods Dining Hall at the University of Houston. Moody Park in Houston features one of Jiménez’s best-known works, Vaquero. This pistol-waving Latino glued to the saddle of an outlaw bronc rounds out the history of the American cowboy, highlighting the fact that the first buckaroos originated in Mexico.

Another of Jiménez’s best-known works, Man on Fire (1969, cast in 1999) is on display in San Antonio at the McNay Museum. “He’s based on the historical figure of Cuauhtémoc, who was an 18-year-old that organized the Mexicans, after Montezuma had led them into the city, and they drove the Spaniards out of the city,” the artist explained in a 1994 exhibition catalog. When Hernán Cortés’ men regained control, they executed Cuauhtémoc.

Two Jiménez pieces enliven the galleries of the Blanton Museum of Art at UT-Austin. Border Crossing (1989) depicts a trio—a man carrying a woman who holds a baby—crossing the Rio Grande from Mexico. Nearby, Progress II (1976) captures a vaquero roping a breakaway Longhorn.

I had the pleasure of meeting Luis Jiménez when he came to Austin in the spring of 2006 to create a lithograph, La Voz de la Frontera, as a benefit for Texas Folklife’s series of border radio performances. He talked about listening to radio station XELO out of Juárez while growing up in El Paso, recalling his delight at discovering rhythm-and-blues and other music. The following June 13, I was half-asleep in an El Paso motel room, with the TV news on, when I heard the shocking news that Jiménez had been killed in his New Mexico studio while moving part of a work-in-progress, the huge Blue Mustang that he was making for the Denver airport. (Smaller versions of the horse can be seen in downtown Abilene and at the Historic Brownsville Museum.)

When designing Blue Mustang, Jiménez drew on interpretations of horses from various cultures, explains Susan Jiménez. “He pulled from all these cultures to make this image of a horse that was archetypal and universal,” she says. “It’s a symbol of the great American West that he loved so much.”