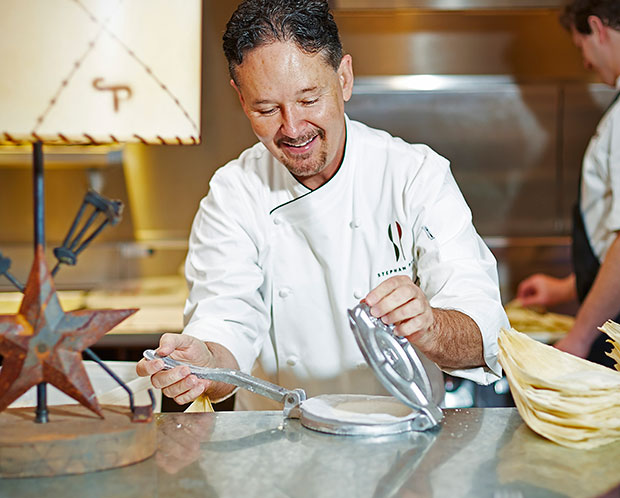 “I spent a good part of my adolescence at the truck stop café, spending time with Tammy Wynette on the jukebox and gum-smacking waitresses, the fry cook in a floppy hat with a cigarette hanging out of his mouth.”—Chef Stephan Pyles

On the Texas culinary stage, few chefs enjoy such stature as chef Stephan Pyles. Born and raised in Big Spring, where his parents ran a truck-stop diner, Pyles helped bring Southwestern cuisine to nationwide prominence in the 1980s, was Texas’ first chef to win a James Beard Award for Best New Chef in the Southwest, hosted a Emmy-winning PBS cooking series called New Tastes from Texas, has awarded some $180,000 in culinary scholarships to aspiring chefs, and in his three decades in the hospitality business, has created more than 15 restaurants. Even his philanthropy is food-related; he’s a founding member of the hunger-relief organization Share Our Strength, a board member of the North Texas Food Bank, and the cofounder of the Dallas Hunger Link, a program that distributes perishable foods to those in need.

Mentioned in this interview

Mi Cocina has several locations in the Metroplex.

For information about Andrew Weissman’s restaurants, which include The Luxury, The Sandbar, Il Sogno, and Sip, Google away on your favorite Web browser.

Pyles’ latest contribution to Texas’ restaurant scene, the pan-Latin themed San Salvaje (that’s “wild saint” in Spanish), opened mid-2014 in Dallas’ downtown Arts District, with a menu full of international dishes like Peruvian causa (a layered potato and meat casserole spiced with chile and lime juice), ropa vieja (a Mexican shredded beef dish named for its resemblance to tattered clothing), and cazuela de pollo (a common Brazilian stew with as many variations as Texans have tacos).

Lori: San Salvaje is in the same Arts District space as your old restaurant Samar, which served tapas with Indian and Mediterranean influences. I loved the garlicky naan there! Why did you change the concept?

Stephan: Well, I’d never changed a concept before. But we had new owners of the building, and they announced they were going to close for about six months to work on the building. They said they could either refinish the space and increase the footprint, or simply freshen up Samar. I thought that since we were going to have to close for so long, it would make sense to have something fresh when we reopened.

Stephan: I’ve always loved Mexico, and I’ve traveled there extensively over the years, but I knew I didn’t want to do a Mexican restaurant. And so I thought about my travels in Mexico, and to South America and the Caribbean, and I came up with a concept. The hardest thing was narrowing the focus. I wanted to represent enough of the cultures so the menu didn’t feel strongly associated with one or the other.

Lori: With so many different kinds of foods to choose from, that sounds nearly impossible! 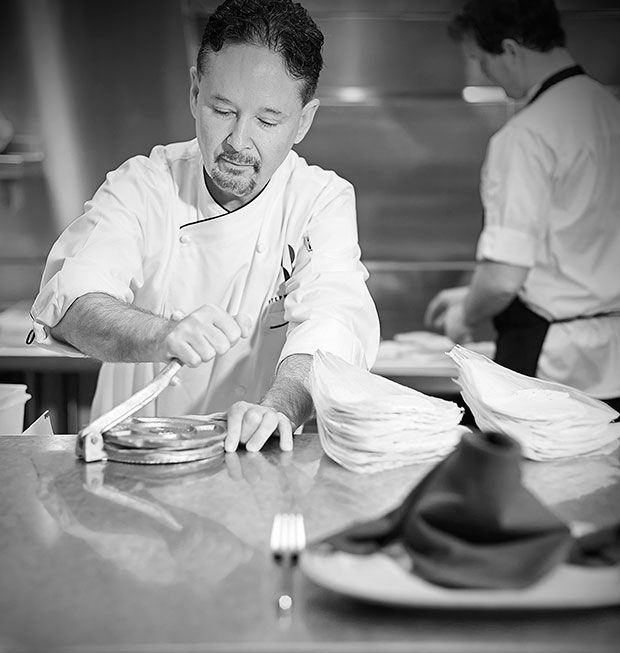 Stephan: I tell people that I was looking at everything south of Harlingen, Texas. Peru turned out to be a strong influence; I’ve been there 10-12 times, and just because I know what causas are doesn’t mean that the rest of the world does. I knew I wanted to feature some foods that people didn’t know about—causas, tiraditos, cazuelas.

A causa is a layered Peruvian dish, usually made of mashed potatoes, yellow chiles, chicken or seafood, and sometimes vegetables. A tiradito is a raw fish dish similar to ceviche. A cazuela takes its name from the cooking pot, or cazuela in Spanish; it’s usually a soup or stew.

Stephan: The chicken cazuela is practically the national dish of Brazil; everybody has a version. We do it a little different. It’s not chicken stewed in a pot; we take the chicken breast, pound it thin, wrap it around a chicken thigh, cook it sous vide, fry it to crisp the skin, then pour it into a casserole dish.

Stephan: (Laughs.) And you have to have tacos and tamales. The nice thing about the menu is that we have everything from small plates for sharing and big plates for a traditional dinner experience. We’re in the Arts District, so people come here before or after a show. And we have a great happy hour.

Lori: I was fascinated to learn that your folks had a truck stop in Big Spring. Is that where your interest in cooking was born?

Stephan: Well, I went to school for music; I was one semester short of a degree in music. Then I took a trip to France, backpacked all over Europe. I think that’s where the seeds were planted regarding cuisine. When I told my parents I wanted to be a chef, they said, “What!?”

Lori: But you have a restaurant in Dallas, Stampede 66, that’s an homage to your parents’ place, right?

Stephan: Yes, Stampede 66 is a big beast. A big, noisy Texas-style brasserie. We have all the foods of my childhood, dressed up—smoked barbecued brisket, honey fried chicken….

Lori: Tell me more about that truck stop!

Stephan: My folks had the Phillips 66 franchise in Big Spring. That’s where the idea of Stampede 66 came from. I spent a good part of my adolescence at the truck stop café, spending time with Tammy Wynette on the jukebox and gum-smacking waitresses, the fry cook in a floppy hat with a cigarette hanging out of his mouth. It was a much different time then.

Lori: Can you share some of the restaurants you like to go to in the Dallas area?

Stephan: Well, some of the chefs who are doing great things include Matt McCallister, whose restaurant FT33 is dynamite. It’s setting the tone for the new Dallas. I like his style; it’s fresh, of the moment. He has learned that you should never look too far outside your kitchen doors for what you’re preparing. He does farm-to-table in a vibrant, brilliant new way. That’s the thing about it, though—you find a dish you like, and then it’s gone.

I also like Smoke, with Chef Tim Byres. He has brought a new fire, literally, to the modern Texas movement—all that wood grilling. He takes it to a new level at Smoke.

And I can’t go to Oak Cliff without going to Dude Sweet Chocolate. And I like the Original Market Diner for breakfast—fried eggs and bacon, biscuits and gravy.

Lori: What about Tex-Mex?

Lori: I’d love to hear about where you like to spend time when you’re not in Dallas.

Stephan: Well, Big Spring has experienced a renaissance, at least in a very small way, because of the restoration of the Hotel Settles. Now there’s a place to stay. About two years ago, I went back to Big Spring. I hadn’t been back in many years; I spent the last 25 years of my life trying to avoid Big Spring. But if this hasn’t happened to you yet, it will, because there’s a point when you take a step back and look at your life. And so when this happened to me, I took some time to meditate on my life, and I said I was going to stay at the Settles and see what Big Spring is like today.

And I fell in love with Big Spring. I was on the 14th floor, examining my childhood and my life. I met with a friend who’s the director of the symphony—yes, Big Spring has a symphony!—and it was a meditative time for me. In West Texas right now, you’re seeing a lot of change as a result of new industry.

San Antonio, I love it. I have a restaurant there, Sustenio, at the Hotel Eilan, so I visit frequently. There are a lot of interesting things going on in San Antonio. Besides Sustenio, I follow one of my former chefs, David Gilbert; he’s an up-and-comer. His place is the Tuk Tuk Taproom; it’s Southeast Asian street food. Other chefs to pay attention to are Andrew Weissman and Jason Dady; you can’t get a bad meal at any of their places.