Czech Out the Texas Kolache Trail

These pillowy pastries evoke Czech tradition with each bite 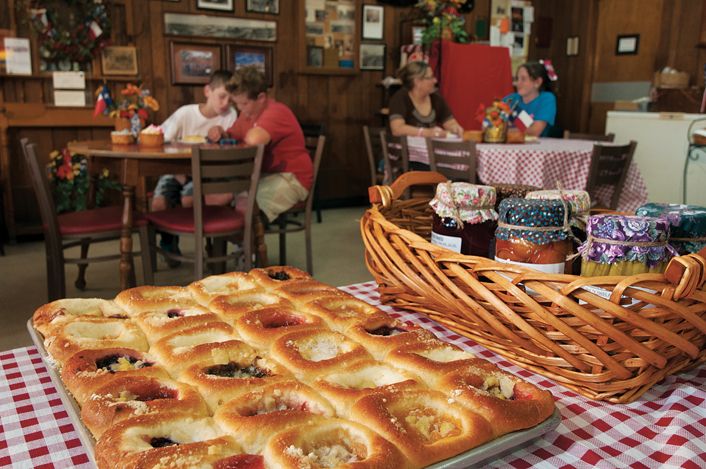 A few blocks from I-35 in the town of West, the Village Bakery makes kolaches from a recipe developed by the owner’s Czech grandmother. (Photo by Michael Amador)

When I take my place in line, nearly a dozen people are ahead of me in front of the bakery counter at the Czech Stop in the town of West. That wouldn’t be surprising—except that it’s almost 3 a.m. At least I’m not the only traveler who’s addicted to kolaches—delicious, yeast-dough pastries filled with fruit, meat, and sometimes vegetables. Even in the wee hours of the morning on a late-night drive to Austin, I can’t pass up the 24/7 bakery that’s the Valhalla of the kolache world. Some people measure trips in miles. I measure them in how many of the tasty Czech treats I can eat along the way.

“They’re the perfect road food,” says Barbara Schissler, CEO and president of the Czech Stop, a bustling store and bakery that opened 29 years ago on the I-35 access road and has been selling kolaches and other treats nonstop ever since. West is one of many sources for kolaches, a food tradition Czech settlers brought with them when they immigrated to Texas in the 19th Century. The best ones are still made by hand with love and pride, and served warm. And they’re still a comfort when you’re a long way from home. Don’t miss these stops on the Texas Kolache Trail.

Visit the Village Bakery in a cozy 1903 building in downtown West on an early morning, and you can smell the tantalizing aroma of dough baking in a vintage, gas-fired oven a few steps behind the counter. “The oven is part of our secret,” says co-owner Mimi Montgomery. “It takes years to season an oven like ours. There aren’t a lot of them around.”

Montgomery is a proud keeper of traditions her parents started when they opened the bakery in 1952. “Before then, you could find kolaches at weddings and other social gatherings, but there was no business on a commercial level,” she says. “It wasn’t easy to make them in quantity. Luckily, my father was a chemist, and my grandmother, who was Czech, helped my dad develop the recipe.”

“The classic fillings are poppyseed, apricot, cherry, and prune,” she explains. “In the Moravian area of the Czech Republic, the kolache is much flatter. In Texas, we allow the dough to rise higher, so the kolaches are fluffier.”

Pockets for the fillings are shaped by the baker’s fingers, and everything—from the dough to the fruit mixtures—is made daily from scratch. “We don’t use anything from a can,” Montgomery points out.

Don’t miss: The poppyseed kolaches here, unlike the fruit-filled kolaches, are oval-shaped in the Moravian tradition. The Village Bakery is at 113 E. Oak St. in West. Call 254/826-5151.

Get here early if you can. “Our bakers start at 11 at night, and kolaches come out at 2:30 a.m.,” Barbara Schissler says. The kolache lineup is ever-evolving. A kolache filled with pumpkin and cream cheese started as a Thanksgiving specialty a few years ago and became so popular that it’s now on the menu year round.

When Manager Evelyn Cepak came to the Czech Stop some three decades ago, she brought with her a time-honored family recipe. Before joining the bakery, Cepak had volunteered as a bread-baker for a booth at Westfest, the town’s annual Labor Day celebration of polka and other aspects of Czech culture. “I enjoyed the experience so much that I wanted to work for a bakery,” she says. “I never dreamed it would be this big.”

“We do it all by hand. That’s our golden rule. Everything is made from scratch,” Philip Weikel explains, standing in the kitchen of his family’s bakery in La Grange. That’s a tall order for a business that prepares as many as 16,000 kolaches in a busy month like November. From the outside, you could mistake it for a service station on steroids, but customers come here for a different kind of fill-up. “I don’t know what created the kolache boom,” Weikel says. “But they’ve become very popular. Much of our business comes from locals, and we also get huge numbers of travelers.”

Weikel’s family has been in the restaurant business since 1929, when Weikel’s grandfather, Alvin Weikel, and Alvin’s brother, “Pop,” opened the Bon Ton Café in downtown La Grange to cater to pipeline workers. “We still use my great-grandmother’s recipe,” Weikel says. “She brought it from Czechoslovakia. What makes us special is our
dough. It’s as succulent as the fruit fillings.”

Weikel’s and Hruska’s lie on opposite sides of Texas 71, about 14 miles apart, so you could try Weikel’s on your way to Houston and Hruska’s on your way back (or vice versa). An expansion last year nearly doubled the size of Hruska’s store and bakery, adding a new seating area and an expanded deli counter. Owner Teresa James is especially proud of a huge photo mural on the rear wall, which shows her grandfather’s original market, built near this site in 1912. What impresses most visitors, however, is the array of fresh-baked kolaches, cookies, colossal cinnamon rolls, sausages, and other items ready to eat on-the-spot or take home.

Don’t miss: The bakery puts its own twist on sausage kolaches with a pork pan sausage made in-house. It’s enclosed in a savory wrapping of dough. Hruska’s Bakery is at 109 W. Texas 71 in Ellinger. Call 979/378-2333.

In a vintage red house a half mile south of I-10 near downtown Schulenburg, sisters Lynn Heller and Patsy Canion operate the bakery their parents, Clarence and Evelyn Besetsny, opened in 1979. “It started as a house, but my parents added on three or four times,” Heller says. One of the additions added a drive-through lane to accommodate travelers in a hurry. Bakers start at 2:30 a.m. to have kolaches ready when the bakery opens at 5:30. “A lot of times, we keep baking until lunchtime,” Heller says.

Much of the work is done by hand, but some of it takes special equipment. For example, bakers use a hand press called a rounder to cut the dough into perfectly shaped circles, 36 at a time. “That way, we can keep the size uniform,” Heller explains.

And while the Original Kountry Bakery prides itself on kolaches, it makes other baked goods, too, including pies (apple, pecan, cherry, and an assortment of meringues), blueberry-cream-cheese rolls, and cinnamon rolls. “We serve lunch, too,” says Heller. “We do hamburgers on homemade buns, chili made from my dad’s recipe, and all kinds of sandwiches.”

I leave with an order of fruit kolaches that I can hardly wait to sample, but I want to save them for a special place. A three-mile drive from Interstate 10 takes me to a quiet lane leading to St. Mary’s Catholic Church at High Hill. Artisans elaborately painted the church interior to remind German and Czech Moravian parishioners of the beautiful churches of their homeland. At a picnic table on the grounds on a balmy early morning, I take an apricot kolache from the bag and take a bite. Sitting in this blissful place, I think about the long journey that brought the Czechs here, and I’m thankful they brought a little slice of heaven with them.

Don’t miss: The filled poppyseed kolaches, their filling enclosed in dough, puts a tasty (and easy to eat!) twist on a traditional favorite. Original Kountry Bakery is at 110 Kessler Ave. (US 77 North) in Schulenburg. Call 979/743-4342.