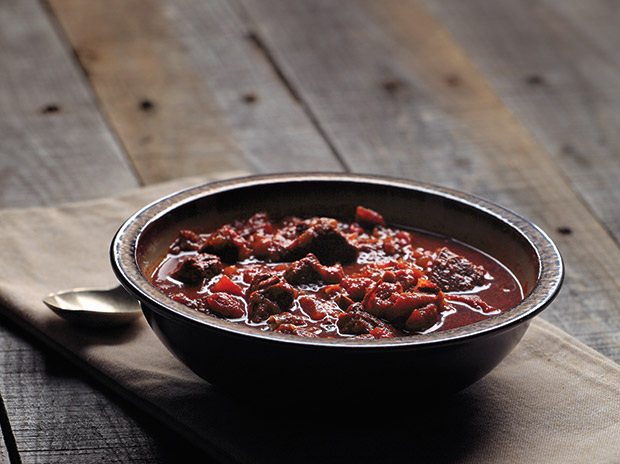 Although the origins of chili are a bit soupy, some historians claim it stems from a spicy stew concocted by Spanish immigrants in San Antonio, circa early 1700s. Others hold that chili is descended from a trail stew favored by cowboys in the late 1800s. Either way, it has become an undeniable part of Texas’ heritage and a symbol of our state.

This recipe is my modern take on a classic Texas chili, as featured on the March 2016 cover of Texas Highways.

Season the Beef: In a large bowl, add the rib eye pieces along with 2 tablespoons brown sugar and 1 tablespoon salt. Toss until the meat is coated.

Cook the Beef: Heat the olive oil and vegetable oil in a large skillet over medium-high heat. Cook the meat in batches. Using tongs for turning, sear/brown each piece on all sides (about 3-4 minutes). Transfer beef to a Dutch oven or 5-6 quart slow cooker.

Deglaze: Add 1/2 cup water and bring to a boil. Deglaze the pan by scrapping the brown caramelized bits from the bottom of the pan (about 30 seconds).

Sweat the Onions: Add onion to the skillet, reduce the heat to medium and cook about 5-6 minutes or until soft.

Spice it up: Add in the green chiles, garlic, cumin, paprika, chili powder, and remaining brown sugar. Cook about 3 minutes.

Simmer Down: Add the tomatoes, the beef broth and 1 cup water to the pan. Simmer about 5 minutes.

Go Low and Slow: Transfer to the Dutch oven or slow cooker. Cover and cook on low heat for 6 hours. The chili will appear soupy and thin at first, but will reduce in volume. The flavors will become concentrated as it cooks and tenderizes. Add salt to taste during the last hour of cooking. For additional spice, add 1/2 teaspoon of ground cayenne pepper, an additional tablespoon of chili powder or hot sauce.

Serve hot with garnishing of your choice. Chili refrigerates and re-heats well. Often times, like with many soups, it’s even better the next day. It can keep refrigerated for several days.