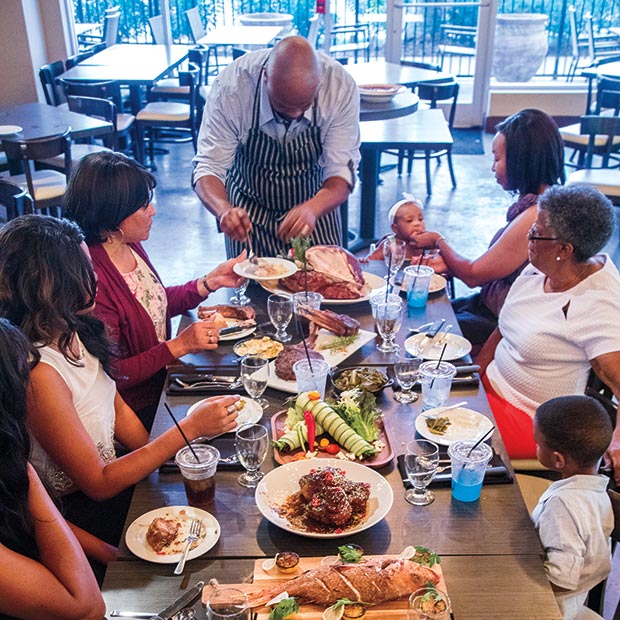 Growing up on the northwest side of Houston, Ross Coleman says his mama always took care of the holiday meals. “We would usually have a nice gathering and would eat traditional things like turkey, ham, mac n’ cheese, chitlins, and sweet potato pie,” he recalls.

An athlete who excelled at sports like football, basketball, and track, he didn’t really take an interest in the kitchen until one day in 2001, when he saw Bobby Flay throwing it down against Chef Masaharu Morimoto in one of the original Japanese episodes of Iron Chef. “It blew my mind,” Ross says. “I called the Art Institute of Houston the next day and enrolled. I was 18.”

These days, when it comes to preparing holiday meals, Ross, who owns Kitchen 713 in Houston with chef/co-owner James Haywood, is the one in charge of the family meals. And in the same way that his restaurant serves globally inspired Southern cuisine, he tends to change things up when cooking at home. For Christmas, that means bringing a little culinary flair to his smoked turkey with a Cajun-style brown gravy flavored with crab meat, crawfish, and shrimp. Lamb chops, likewise, don’t just get grilled. Ross marinates the whole rack in salt and pepper, onion and garlic powders, mustard, and hot sauce; cold smokes the entire rack; then finishes it over an open fire on the grill.

At New Year’s, “that’s when we break out the chitlins,” he says, “‘’cause it’s pork, and it’s supposed to be for good luck.”

Ross often combines several of the Southern “good luck” ingredients in one pot, served like a stew—ham hocks, collards, mustard greens, and black-eyed peas. “That way, he says, “You get all your traditional things that you need to eat for New Year’s in one bowl.”

In a large stockpot, sauté bell peppers, celery, and onion in 3 T. oil for about 5 minutes until soft. Add chopped garlic and sauté for 2 minutes. Add chicken stock, black-eyed peas, ham hock, andouille sausage, cherry tomatoes, and mustard greens. Bring to a boil, lower heat, and let simmer for 1 to 1.5 hours until peas are soft. Add water as necessary, keeping the water level 1 to 2 inches above the beans.

Once the beans are tender, turn off heat and add Parmesan rind; let sit for 15 minutes. Add salt and pepper to taste.