Written by: Jane Wu
Photos by: Will van Overbeek 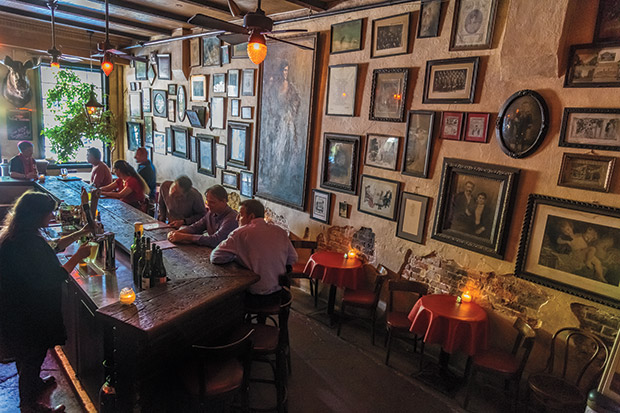 Let’s face it: The city that produced the Astrodome and the Space Center has a reputation for focusing on the future. But downtown, near the spot where brothers Augustus and John Allen founded the Bayou City in 1836, a narrow, two-story brick structure built during the Civil War era still stands today amid gleaming high-rises and skyscrapers.

Here, in one of Houston’s oldest structures, sits La Carafe, a rare bar that’s listed in the National Register of Historic Places. La Carafe is and always was a no-frills dive bar, serving just beer and wine. Payment is cash only, because the 1907 National cash register won’t accept credit cards. There’s no food service, unless you count the rack of potato chips next to a portrait of Sam Houston. You won’t find craft cocktails, purse hooks, or Wi-Fi here. But you will meet friendly, easygoing people, many of them regular patrons who’ll share a quip or two, and bartenders who are as knowledgeable about La Carafe’s storied past as they are in picking a brew or vino to suit your taste.

I first discovered La Carafe around 1980. After a night of hearing punk bands at Rock Island, my friends and I would end the evening at La Carafe for a nightcap. We’d often see the notorious Urban Animals, a ragtag group of young street-skaters, arrive after a night of zooming around vacant parking garages. Fueled by rumors of La Carafe’s haunted sightings, we speculated that our gruff and enigmatic bartender might possibly be the late singer Jim Morrison of The Doors, as he bore a striking resemblance. After seeing La Carafe pop up in travel articles and blogs about downtown Houston in recent years, I decided to revisit one of my favorite watering holes one afternoon.

Bartender John Rittman greeted me as I entered. An affable fellow with vividly-hued teal, purple, and hot-pink hair, Rittman has been tending bar here for 11 years. All of La Carafe’s staff has worked here at least seven years, and are well-versed in its history. When newbies walk into La Carafe, they’re handed a drink menu with a brief history of the building printed on the cover. After all, La Carafe is more than a bar—it’s part museum, as the decades-old paintings, photos, clippings, sheet music, taxidermy, and coats-of-arms that line the walls attest.

The drink menu is lengthy: There are more than 20 beers, mostly Texas and local craft brews—including two on tap—and nearly as many wines and sparkling wines, as well as a couple of ciders. Rittman showed me a tiny greeting-card size menu from the ’70s. “Look at the price of the champagne—$6.75. It’s the most expensive thing on the menu!” he exclaimed.

On this sunny spring weekday, bright sunlight streamed through the open door and the tall, bare windows. The bar was clean and airy, showing no traces of the previous night’s activity. The candlesticks flanking the bar have thick, lava-like layers of wax, built up from years of use. A few customers had already taken their seats in the bar and at the patio tables outside. I saw millennials who were visiting La Carafe for the first time, retirees, and self-employed men and women sipping a beer or a glass of wine over pleasant, idle chitchat. “I like that there’s no TV here,” said Rittman. “It gets people talking to each other. Conversations are our form of entertainment. We get people of all kinds—blue-collar, rich folks, all races and religions here. Sometimes the discussion turns to politics,” he added. “But nothing heated or angry. It’s all good here.”

Shortly after I took my seat at the bar, Carolyn Wenglar, the owner of La Carafe, dropped by to visit. Looking fit in a magenta tracksuit and her long red hair in a ponytail, it’s hard to believe she’s 80 years old. Wenglar is usually here in the evening, when she’s taking a break from another legendary dive bar that she owns and operates half a block away, Warren’s Inn on Travis Street.

I asked Wenglar to tell me about the history of the building and the bar. In the early 1860s, the Kennedy Bakery was the first business in operation here. During the Civil War, the bakery sold hardtack, a shelf-stable type of biscuit. Legend has it that Sam Houston once paid a visit to this site. I wondered if it were true, and Wenglar thinks he could have slept here. “He was a big drinker, you know,” she added with a sly smile.

The building later housed a drugstore and a hair salon before a fellow named James Harrison leased the space in the mid-1950s and opened a bar, which he named Le Carafe. A few years later, businessman William V. Berry bought the bar and changed the name to La Carafe. Then in 1987, La Carafe was purchased by Warren Trousdale, who died a little more than a year later, leaving both La Carafe and Warren’s Inn to his sister, Carolyn Wenglar. She has proudly kept both bars running since then.

I was curious about the eclectic collection of artwork on the walls. According to Wenglar, many of these pieces were acquired by Berry, who was a world traveler. One of the most celebrated items is an enormous, full-length portrait of a woman named Gladys Burrell Knox, brought from Europe during one of Berry’s excursions. The painting endured years of grime and cigarette smoke, and Wenglar recently had the painting cleaned and restored.

Wenglar showed me around the upstairs bar, which is open Friday and Saturday nights. We walked out to the balcony as she described her efforts working with Houston’s Archaeological and Historical Commission to add the terrace. “I took out the wrought-iron that used to be here,” she said, pointing to the large windows as we stood outside. “These used to be closed off,” she added, gesturing to the small pass-through doors she had restored below the open window. Inside, I found a clever example of repurposing near the stairs: An old working icebox that was converted into a wine storage vault.

I was intrigued by the legendary haunted sightings reported over the years. Wenglar and Rittman have heard the oft-repeated tales, such as the sighting of Carl Truscott, a deceased bar manager seen through the window at night. Rittman recalled, “A guy once came over and told me he felt a hand grabbing his shoulder in the restroom.” Yet the tiny lavatories are barely large enough to fit one person, let alone two.

When we returned downstairs, I made a pilgrimage to La Carafe’s legendary jukebox, which is filled with tunes from bygone eras. When I first walked in, I heard strains of Sinatra’s crooning followed by Marley’s wailing. Flipping through the titles, I saw artists ranging from the Ink Spots to the Cowboy Junkies. I also spotted The Doors’ Morrison Hotel, with Jim Morrison on the album cover facing me straight-on. I told Wenglar about the ghostly rumor that my friends and I started about Morrison moonlighting as a bartender. Wenglar stared at the cover for a minute, then said, “I bet it was Ted that you saw,” referring to a bartender who has worked at La Carafe at various times. “His hair was long back then.”

As my “beer-thirty” time arrived, I staked my place at the bar and ordered a Lone Pint Yellow Rose IPA on tap. Served in a frosty mug, it was crisp and slightly hoppy. I started to walk back to the jukebox to pick a song, but Rittman and a couple of bar patrons called me over to chat. The music could wait, this time at least.