Setting the scene for sophisticated dining in San Marcos 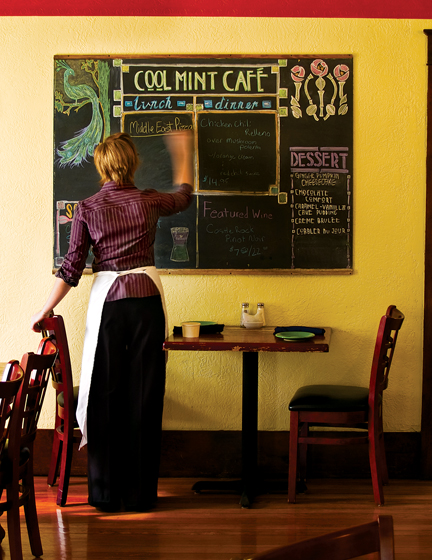 I guess we all know where this is going: Perkins is owner and executive chef of Cool Mint Café in San Marcos, and the restaurant is certainly not a one-person operation. It is, however, something original in this small town, which lies halfway between San Antonio and Austin and is home to Texas State University (TSU). The food at Cool Mint tastes like contemporary, big-city fare, with fresh, wholesomely prepared offerings, but the ambiance is firmly rooted in its small-town heritage.

Perkins and I sit on a sofa just off the cafe’s foyer as she explains her focus on using in-season, organic ingredients from local farmers and ranchers for her “South X Southwestern” menu. The star of the chicken cordon bleu is Buddy’s Natural Chicken out of Gonzales; the natural beef for a Bobcat Burger, which comes layered with green chiles and Jack cheese, hails from Michaelis Ranch near Kyle; and fresh beets—which might show up in any number of dishes—are grown in nearby Lockhart. Such shopping is grounded in the common-sense practices of the past—kind of like Cool Mint itself.

Originally constructed as a duplex in 1923 by sisters Jenny and Mae Garth, the Arts and Crafts bungalow that houses the cafe came straight from a Sears & Roebuck catalog. The structure has a solid feel; it’s substantial but not imposing. “Basically, each room is built like a wooden box with cut-out doorways,” says Perkins, as we walk across hardwood floors from one dining room to the next. “Most of the original woodwork was intact, and we discovered the original glass-paned double doors stored in the attic.”

The building still has a homey feeling, encouraging some diners to remember its earlier days, when “Miss Jenny” and “Miss Mae” lived in one side of the house and rented out the other. Jenny Garth was an elementary schoolteacher, and her sister Mae did the housework and cooking.The well-loved pair lived here some five decades, until their respective deaths in the 1970s. Other diners recall the building from its time as the Master’s School of San Marcos, a private elementary school now at another location. Today, the walls in each of the three dining rooms sport unusual hues like mint green and baby-chick beige, which contrast with the original dark-stained woodwork and offer a distinctive backdrop for the restaurant’s Arts and Crafts-style decor. (Guests also eat on a spacious, enclosed veranda that was once the front porch entrance.) During the day, the large, wavy glass-paned windows around the perimeter of the restaurant let in sunlight, and at night, hammered-metal wall sconces original to the period illuminate the tables. Framed sheet music from the 1920s and ’30s hangs on the walls, along with a slate chalkboard that lists the soups, beers, wines, and other daily specials. The music of Miles Davis, John Coltrane, and other jazz greats plays softly throughout.

The specials tend to outsell other dishes, but my favorite is right there on the menu; it’s a portobello sandwich with red peppers and a pesto mayonnaise. Perkins says I should thank her sous chef, Bennett Hallenbeck, who she says is a “culinary artist” with peppers. The enchiladas are always a solid choice, too. They come stuffed with smoked chicken and topped with white cheddar, verde sauce, and a dollop of cilantro-and-lime-flavored sour cream-or-you can order them stacked with shiitake mushrooms, roasted green chiles, and diced sweet potatoes, topped with goat cheese and red chile sauce. Both variations come drizzled with a mango-habanero sauce.

Perkins understands Texan tastes, so it’s no wonder that Cool Mint’s pork tenderloin with ginger-mango salsa and the rack of lamb with roasted-tomato Espanole sauce are hot-sellers, but she wishes more people would try the seared yellowfin tuna topped with Thai barbecue sauce. “Thai-style barbecue sauce has about 20 different ingredients in it, including sesame oil, sesame seeds, hoisin sauce, and cilantro, and it makes a flavorful blend that caramelizes the outside of the tuna steak,” says Perkins. “If you haven’t tried it, you don’t know what you’re missing.”

In addition to featuring beers brewed locally, the cafe’s beverage list includes Becker, Messina Hof, and other Texas wines among the California, Oregon, and Washington State selections. On a warm spring afternoon, McPherson Cellars Rose of Syrah-Grenache—with its subtle hint of smokiness and long berry finish—would pair especially nicely with many of the Mediterranean salads, pastas, and sandwiches available.

Even though Perkins is a native Texan, there are subtle hints of California/Pacific Northwest cuisine at work here. For a time she lived on the Monterey Peninsula and met a lot of hungry Texans like herself. She opened a cafe, and within two weeks, there was a line around the block for the biscuits and gravy, chicken-fried steak, and cornbread. Years later, living in Oregon, she enrolled at a culinary school in Portland. “I just wanted to be in the food business,” she says, noting that, at this point, she completely ruled out owning a restaurant again.

Perkins graduated, she catered, and then she created a popular food product—”Suzanne’s Ritzy Roll-up”—that was so popular that Costco and Sam’s Club both regularly sold out of it. After returning to Texas in 1998, she bought a farmhouse in Blanco and worked as a private chef and caterer throughout the Hill Country until the day in 2006 when she saw the 1923 bungalow for sale in San Marcos and fell in love with it.

Originally, Perkins envisioned Cool Mint as a neighborhood spot, and since TSU’s campus is just a short stroll away, you’re likely to see professors enjoying bowls of tomato-basil bisque and grilled cheese sandwiches. But the reality is that the cafe’s reputation has spread, making it a more of a destination restaurant for those who live near San Marcos and are in search of seasonal cuisine with real flair. And for selfish reasons, I hope it’s just the first of many similar establishments.