The Beginner’s Guide to Camping in Texas

A novice shares her first camping experience, plus tips and tricks to help the uninitiated enjoy the state’s natural beauty

“If we leave now, we can be home by 11,” my boyfriend, Alex, told me as we were sitting in his Honda Accord, damp from the sudden onslaught of rain and out of breath from hurriedly putting our valuables in the car.

I’d never loved him more than in that moment. He’d given me permission to quit my first camping trip. After a sleepless night, a canceled stargazing party, chilly and wet weather, and lackluster campfires, we were officially throwing in the towel. We’d lasted just 36 hours in the great outdoors. Giddy from the rush of freedom and abandonment of pride, we pulled out of Inks Lake State Park and headed home to Austin.

I’d never understood the allure of camping. Perhaps it’s because my family was never very interested in spending time in the wilderness. We traveled quite a bit, but our destinations were always big cities with the inescapable smell of car exhaust and neon signs lighting up the night sky. In the outdoors, there were bugs, critters, and uncontrollable temperatures—and why would we voluntarily sleep on the ground when my parents worked very hard to put a roof over our heads? Whether due to nature or nurture, I knocked at the door of my 30s with no basic outdoor survival skills or knowledge.

But I was intrigued. Why do people like camping so much? What essential experience am I missing out on? Would giving up the comforts of daily life thrust me into a more primitive, intuitive part of myself I’d yet to encounter?

I wanted to find out—at least give it a fair shot. Maybe, just maybe, I could be a person who, when a friend invites her on a camping trip, picks the best firewood and assists in putting up the tent, instead of making up a lame excuse to skip out.

Having no previous camping experience or passed-down knowledge from my elders, I opted for some training. Luckily, the Texas Parks & Wildlife Department has a program, Texas Outdoor Family, for curious yet cautious newbies like me. Taking place most weekends in spring and fall at parks around the state, TPWD provides equipment and ranger-led workshops on the basics. I attended the session at Garner State Park, west of San Antonio, in September, before my three-day, two-night trip to Inks Lake in January.

My original plan was to camp solo—to see if I could fend for myself. But everyone I talked to, from park rangers to camping-enthusiast friends, agreed that it’s always more fun with other people around. I recruited Alex to come along with me. After nearly four years of trying to convince me that camping can actually be enjoyable, he was more than willing to shepherd me through this experience. He had fond memories of camping and fishing with his dad in his home state of California as a kid and loves building and cooking with fire as an adult. He was full of nostalgia and know-how—two things I lacked. Plus, he already had all the gear.

We arrived at Inks Lake State Park in Burnet on a mild, sunny Friday in January. Because it was the off-season, the park was mostly filled with Airstreams, RVs, and pop-up campers—people who spend a lot of time on the road. After selecting a lakeside spot with water and electricity (at least we could have some of the conveniences of home), we grabbed the events schedule and drove up to our campsite. Mallards and Canada geese swam peacefully on the placid water. We found an even-enough spot on the ground to set up our two-person tent. One thing I learned from ranger Immanuel Salas during the Texas Outdoor Family program is that whatever number of people a tent says it can fit, divide it in half, and that’s the actual number of people it can fit. For two people, it would be prudent to have a four-person tent. We only had enough space to fit very snuggly side-by-side on top of our blow-up sleeping pads. Sure, it wasn’t the Four Seasons, but that’s what this was supposed to be about, right?

After setting up our tent and fold-out camp chairs and exploring a bit of the park on foot, we decided to join in the night-time hike. Camp host volunteer Vicki Iski led us through the short and sweet Devil’s Waterhole Nature Trail. Without the aid of flashlights, we became one with the animals I was already wary of encountering: raccoons, coyotes, feral hogs. Vicki’s passion for the subject and fun exercises made me relax. She handed out Wint O Green Life Savers and asked us to bite down on them while keeping our mouths open so our partners could see the sparks emanating in the pitch blackness. “Cool,” Alex and I agreed. After the hike, I was feeling a little more confident. Maybe camping was fun! And educational! And made us reconsider the wonder of the world just outside the confines of city life! 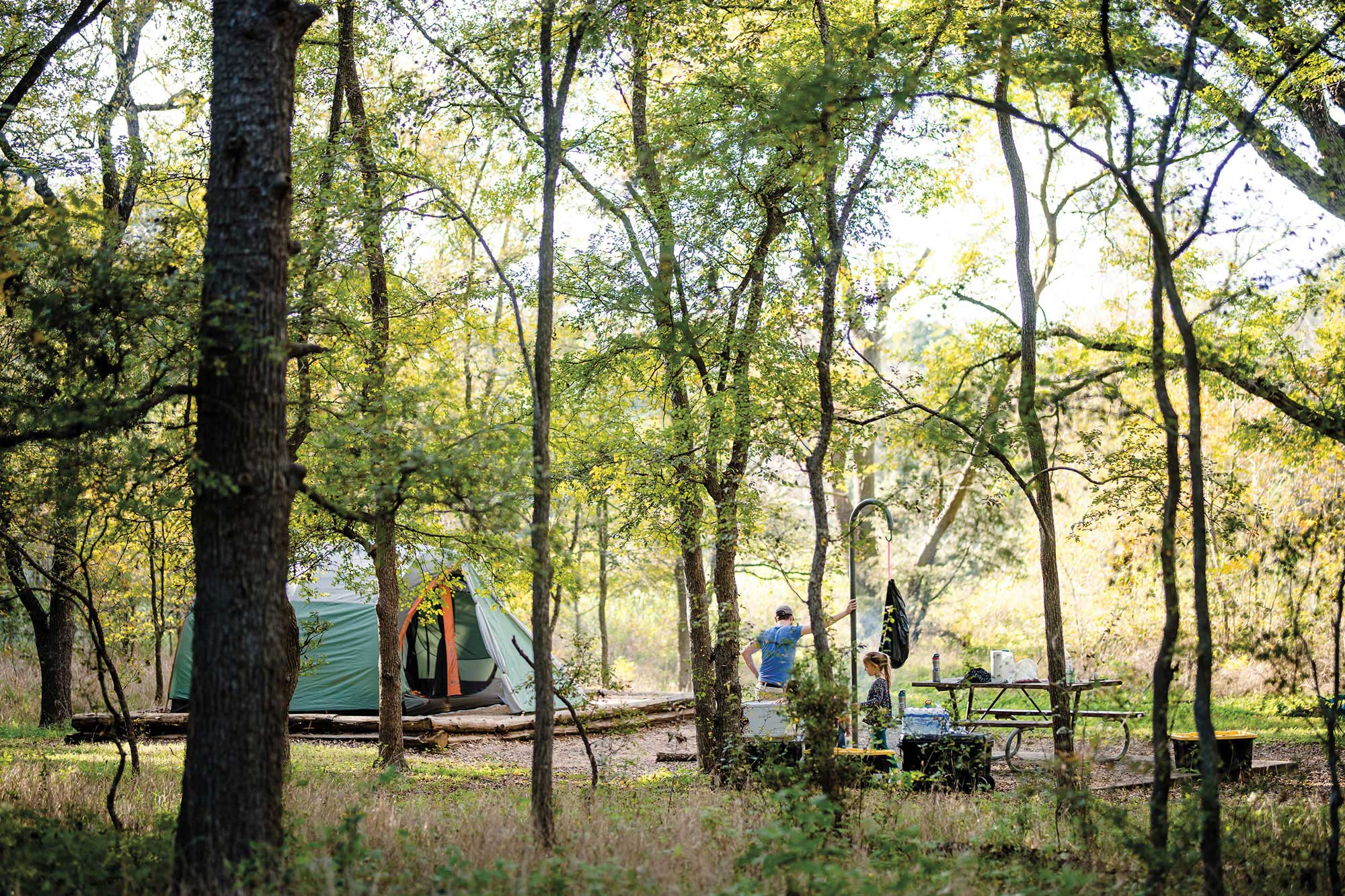 Back at our campsite, it was finally time to build a fire and enjoy the hot dogs and s’mores we’d packed for dinner. Alex crouched at the edge of the fire pit burning pieces of newspaper and spraying them with an accelerant to get the kindling to catch fire. As the minutes turned into an hour with not so much as a twig sparking, Alex grew frustrated. The firewood we’d brought turned out to be damp. Shivering as the temperatures dropped, we settled for peanut-butter-and-jelly sandwiches. We scarfed them down and retreated to the relative warmth of the tent under the blankets.

Sleeping—or the attempt of it—provided its own set of disappointments. Without a decent air mattress or cot, there’s no way to ignore the fact that you’re sleeping on the cold, hard ground. Despite blowing up our sleeping mats and cushioning them with extra sleeping bags and blankets, we were in pain the next morning. My hips ached from sinking through the padding. Alex’s back was stiff from contorting his body in a confined space. Too chicken to leave the tent in the middle of the night to use the bathroom, a 3-minute walk away, I barely got a wink of sleep. We vowed to stay up as late as we could the next night to avoid another pitiful night of tossing and turning. We could sleep when the weekend was over.

The following morning, we drove into town to buy dry firewood, charcoal, and lighter fluid. Wanting something warm and comforting to eat, we stopped at Mama’s Home Cooking for breakfast, coffee, and a slice of buttermilk pie. The sugar and the caffeine perked us up enough to venture to Longhorn Cavern State Park, just 6 miles up the road from Inks Lake. Alex and I are not mountain bikers, kayakers, canoers, fishers, nor long-distance hikers, so we wondered what we would actually do while camping. We leaned heavily on the park’s events and other guided tours to keep us entertained. The hour-and-a-half-long tour through the cave, which had been used as a dancehall and concert venue in the 1920s, was fascinating. From the beautiful crystal formations to the minuscule hibernating bats, the place was rife with delights. We walked through the 1.1-mile passageway in awe at what nature built and what humans dedicated themselves to preserving. It lifted our spirits. We decided to give building a fire another try with our new supplies. 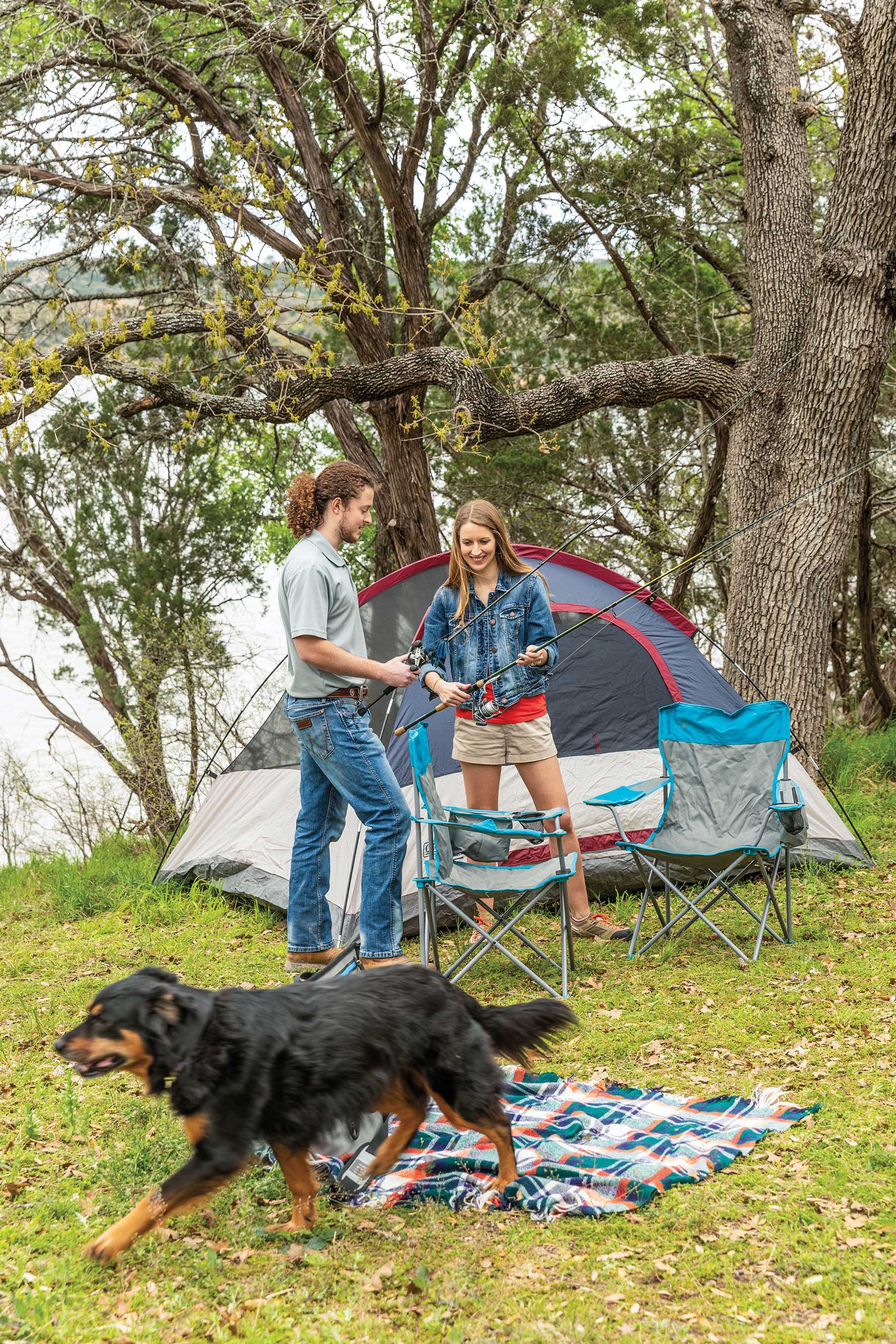 Unfortunately, Mother Nature had other plans. The stargazing party we’d been excited to attend, hosted by the Austin Astrological Society, was canceled because of the cloudy skies and impending rain. While the sky looked ominous, the showers seemed to be holding off. The humidity didn’t help with our campfire, but the lighter fluid did. After about 30 minutes of stoking the flames, we finally had success. The fire was big enough to give us warmth, heat a cast-iron skillet over the grill grates, and melt a jet-puffed marshmallow. Music was playing softly from the Bluetooth speaker we’d brought, and we swigged clandestine wine from enamel cups. We were sore, sleepy, and smelly (for some reason we decided that going 48 hours without showering was a perfectly fine idea), but we were finally capital-C Camping.

Then the rain came. We tried to brave it as best we could—the fire was finally roaring. We were getting soaked. And escaping to the tent, with barely enough room to sit up in, wasn’t much more comfortable. We retreated to the car to wait it out. It didn’t seem like the rain would be stopping anytime soon. Our resolve depleted, we hastily broke down our site, extinguished the fire, threw everything into the trunk, and sped off toward our queen mattress, hot shower, and cuddly cat.

Strangely, in the car on the way home, Alex and I were already discussing our next potential camping trip. We were down, but not completely out. Would we splurge for a bigger tent, or stay in cabins and screened-in shelters? We would definitely spring for a propane stove, if only for emergencies. We’d heard Lost Maples State Natural Area is beautiful in the fall—how early would we need to make reservations?

I’d genuinely enjoyed the programs, tours, and hikes. Camping is a great—and mostly inexpensive—way to see the true natural diversity and beauty of Texas up close. I just know now that a good night’s sleep is something I don’t want to sacrifice. I’m willing to venture outside of my comfort zone in other avenues: I can try kayaking down rapids, showering in a public space, and not having a lick of cell phone reception for days. I’m ready! I’m willing! Just please don’t make me sleep on the ground.

I believe you can be an “indoor person” and sincerely enjoy a long weekend outside. I believe you can find tremendous peace staring into a vista with nothing but the sound of birds trilling and still miss Netflix. I believe there’s a happy medium between pushing ourselves to embrace the wild unknown and being miserably covered in mosquito bites.

I plan to find it on my next camping trip.

Prepare for Your Trip

Go to the Camping Guide
From the May 2019 issue