Written by Art Williams, Photographs by E. Dan Klepper | From the October 2019 issue | Updated: September 30, 2019 | Filed Under: Scenic RoutesThings to Do 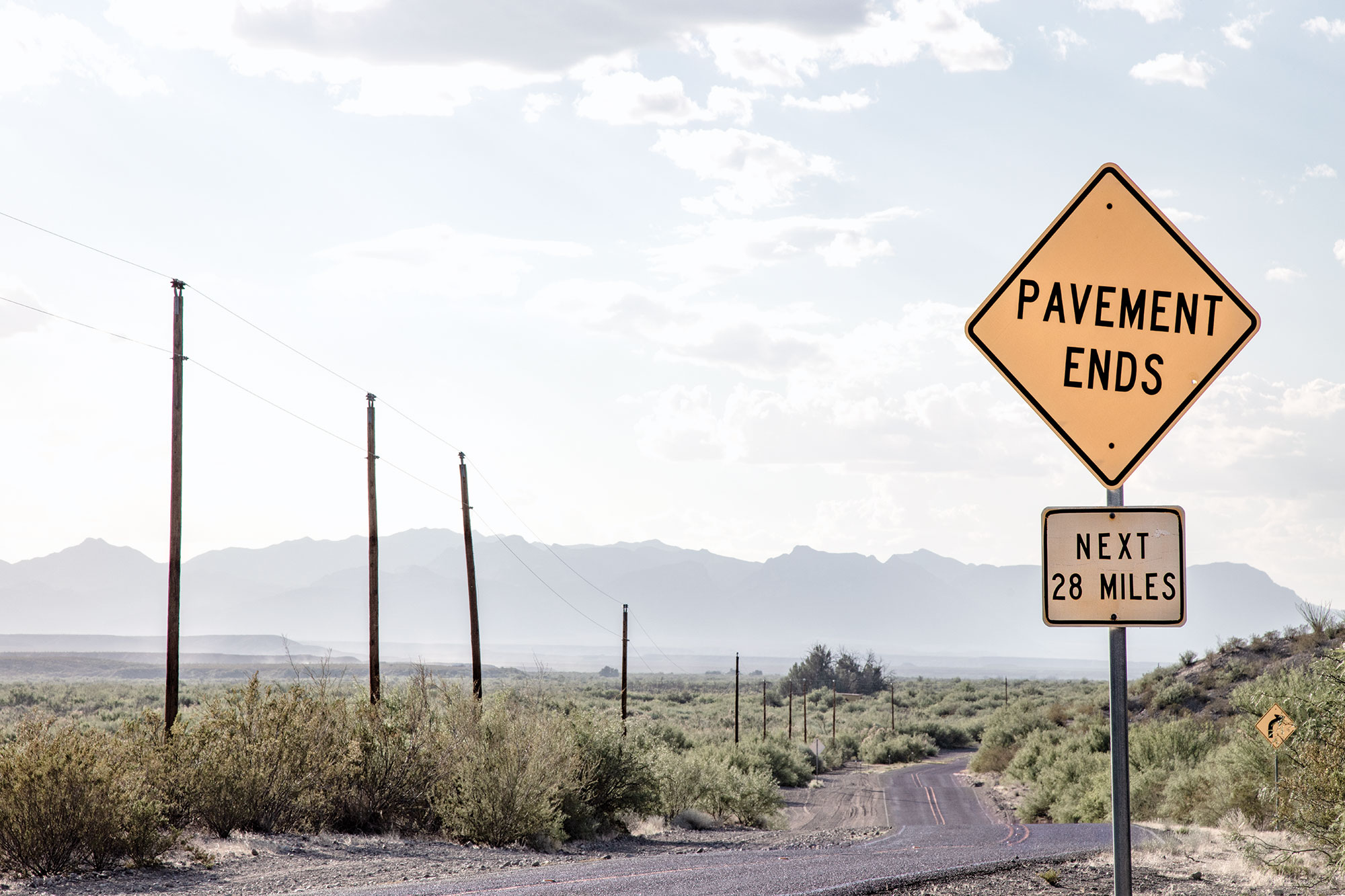 Drive west along Farm-to-Market Road 170 from the border town of Presidio, leaving all convenience stores and gas stations behind, and you’ll travel two slim lanes of humped, serpentine blacktop, its edges collapsing like desert crust. The road’s convolutions mirror the Rio Grande to the left but after just a few miles, the river’s water diminishes, occasionally disappearing altogether. In its place, dense mesquite thickets and catclaw thrive along its dry bed, a thorny border wall of its own making.

On both sides of the road, the country unravels in a sparse scrubland accentuated by towering yuccas and ocotillo, the signature plant of the Chihuahuan Desert—its bony branches like torches tipped with scarlet flames. Shallow arroyos drain this tilted landscape and low, swelling hills give way to rising, rocky elevation. Beyond that, range upon range of broken mountains cradle the route like the walls of a bassinet. Continue driving for another 49 miles, passing a couple of cars if any at all, and the road will abandon you in the tiny community of Candelaria, where the pavement abruptly stops.

FM 170 begins approximately 115 miles southeast of Candelaria in Study Butte, just beyond the boundary of Big Bend National Park. A drive along FM 170, or “River Road,” usually encompasses the stretch from the park to Presidio, providing visitors with windshield views of a storied desert landscape. For most, the tour ends in Presidio, where a turn north on US 67 delivers them to Marfa. But continue on and, while a dead end ultimately awaits, there are seemingly lost histories and communities to discover. 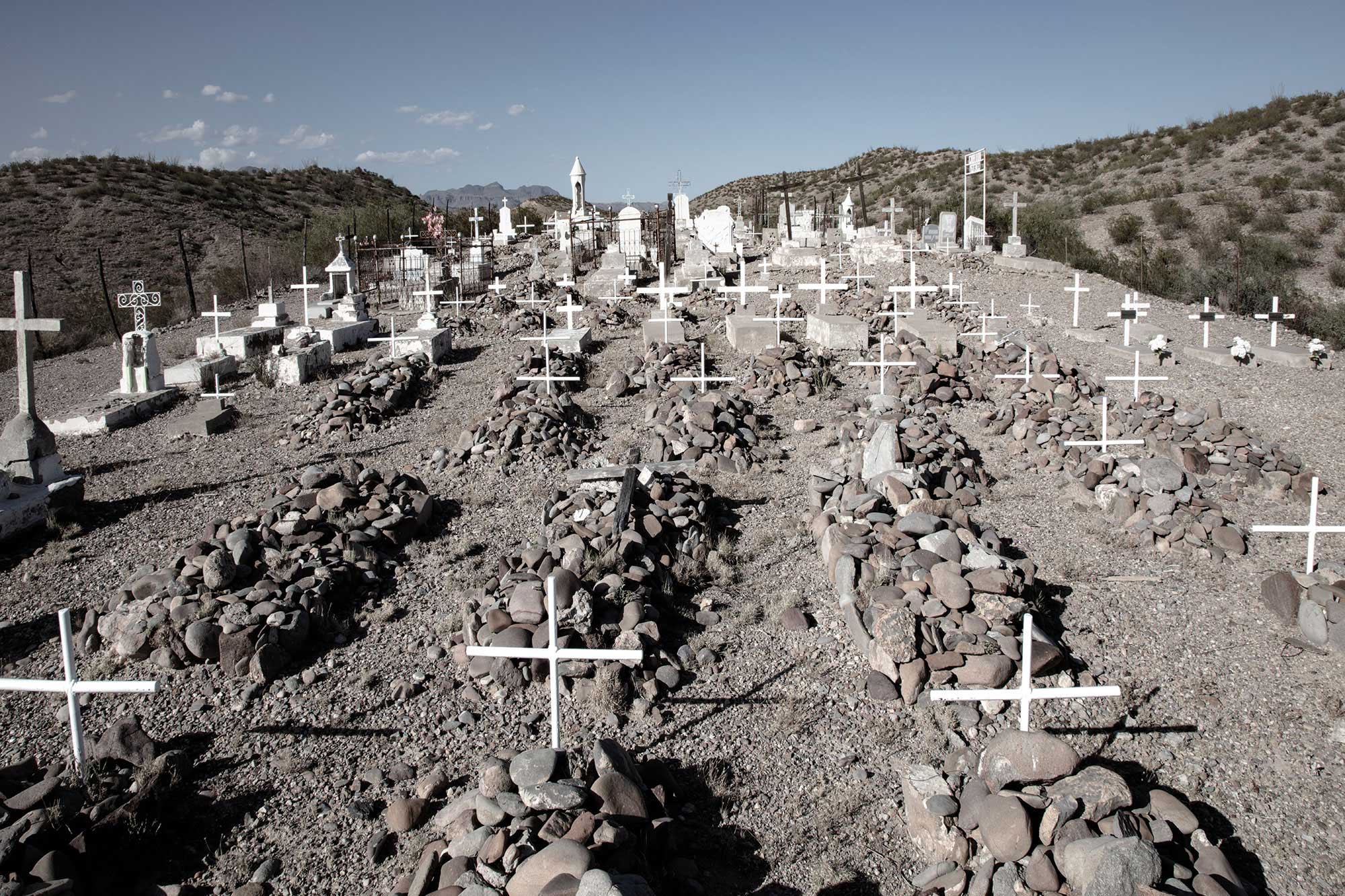 Some people say this stretch of FM 170 leads to nowhere, but they are wrong. This has always been somewhere, an austere, bare-bones region that generations of intrepid and resourceful people have called home. Archeologists believe that humans first arrived between 8000 and 6500 B.C. Later, Paleo-Indians occupied the region for thousands of years. Within the first few miles out of Presidio, La Junta de los Ríos, likely the oldest known settlement in the state, will appear. When Spanish explorer Cabeza de Vaca passed through there in 1534, he found a thriving community of villages, established by the Patarabueyas, who operated a trade network with help from the nomadic Jumano tribe.

Nothing of this ancient past remains in apparent evidence except for the land itself. Drought has transformed the place into a creosote-filled desert. Now, the landscape is favored by independent-minded artists like Rackstraw Downes, the British-born, New York-based plein-air painter who renders the area’s natural sand hills and human-made artifacts, which consist of a racetrack and a water tower, in a wistful, mystical palette. The late Texas painter A. Kelly Pruitt made La Junta his home, living and creating art in a hand-fashioned gypsy wagon beneath the shade of a tin barn that can still be seen from the road. Pruitt, who died in 2009, is buried nearby, alongside his dogs. 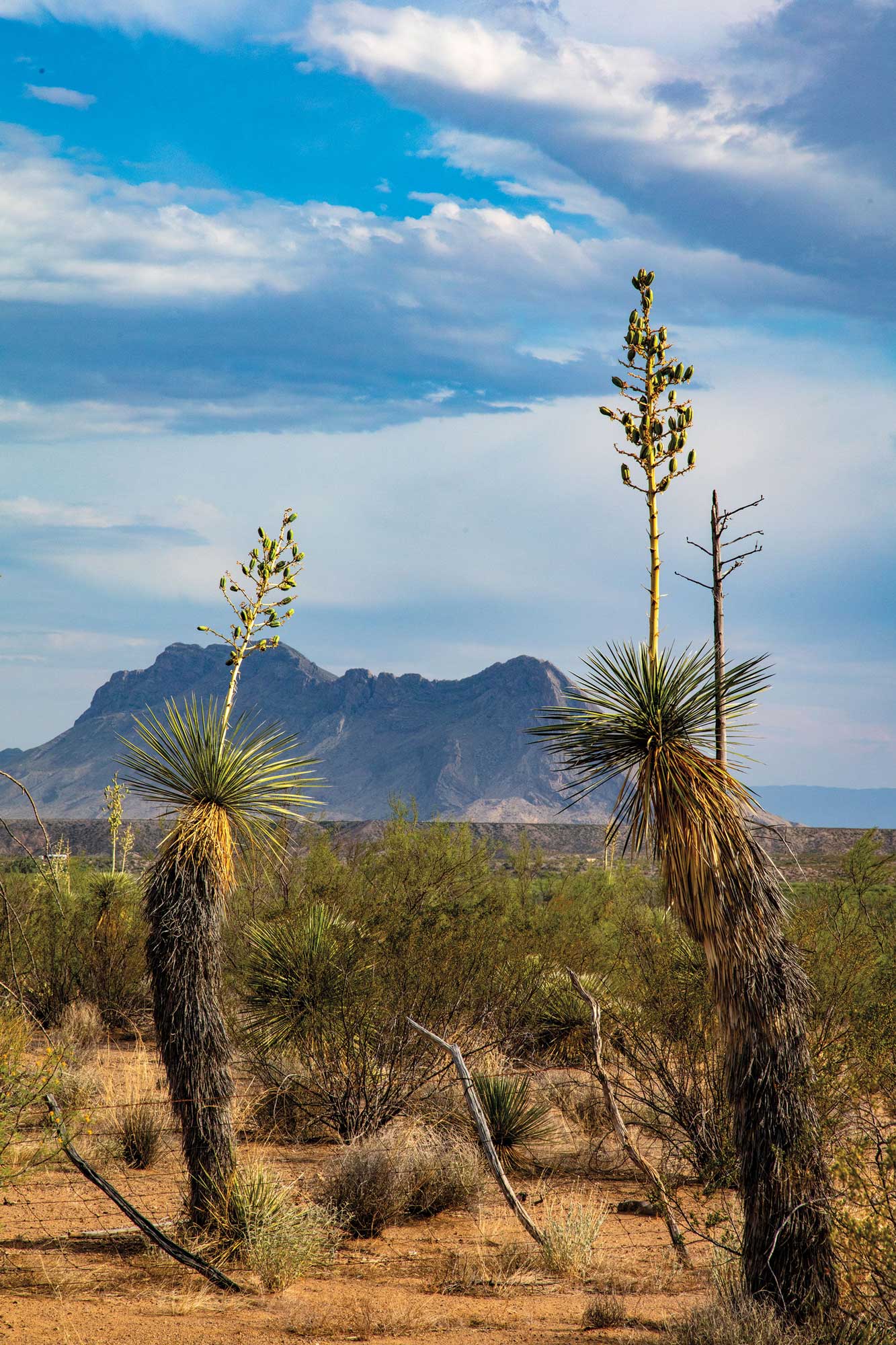 Twelve miles up from La Junta lies the settlement of Indio, established by pioneer John W. Spencer in 1854. Indio is now demarcated most clearly by its surviving remnant, the Indio Ranch Cemetery, located on a short bluff just above the road. Industry once thrived here courtesy of pioneer Esteban Ochoa, who implemented an irrigation project to grow cotton in 1917, then built a cotton gin. Little is left to see of the community, though, beyond the cemetery’s headstones and rows of cross-marked rock piles denoting graves, many unidentified.

Today, seasonal bee-keeping is the dominant industry in this area. Colorado-based Haefeli’s Honey Farms places thousands of hives here as well as additional FM 170 locations so that the high-altitude bees can winter in a warm climate. Tom Haefeli, whose family started its Presidio operation in the late 1960s, says the Big Bend area enhances the honey with flavors of flowering desert plants. It also provides a healthy environment in which his bees can recover after spending most of the year pollinating crops elsewhere, including California and Colorado. “Large-scale, organized farms use lots of pesticides and that’s hard on my bees,” Haefeli explains. “But out here there’s none of that. When the desert blooms, it’s chemical-free.”

Some people say this stretch of FM 170 leads to nowhere, but they are wrong. This has always been somewhere.

Drive another 21 miles northwest of Indio and you’ll arrive at Ruidosa, where a few adobe and timber buildings hug the roadway. Established in 1824 as a penal colony, Ruidosa was once occupied by a group of convicts known as the “Condemned Regiment” before the Comanche massacred them. By 1872, Ruidosa had transformed into a farming hamlet, reaching its highest population of 1,722 residents by 1911. Today, according to Jennifer Weaver, proprietor of a general store and bar there, “the entire population is down to about 15 or 20, and that’s within a 10-mile radius.” Weaver’s operation is also the office for the Hot Springs Airport, a dirt landing strip nearby. “The FAA identifier is 3TangoEcho4,” Weaver says. “Be sure and call first for permission to land and to give me time to chase any wild burros off the runway.”

Nearby lie the handsome adobe ruins of El Corazón Sagrado de la Iglesia de Jesús, the Ruidosa community church built in the early 1900s. As the population declined, so did the church’s condition, but a renovation was launched to prevent what remains of it from collapsing. Meanwhile, roosting bats and free-roaming cattle call the church home. 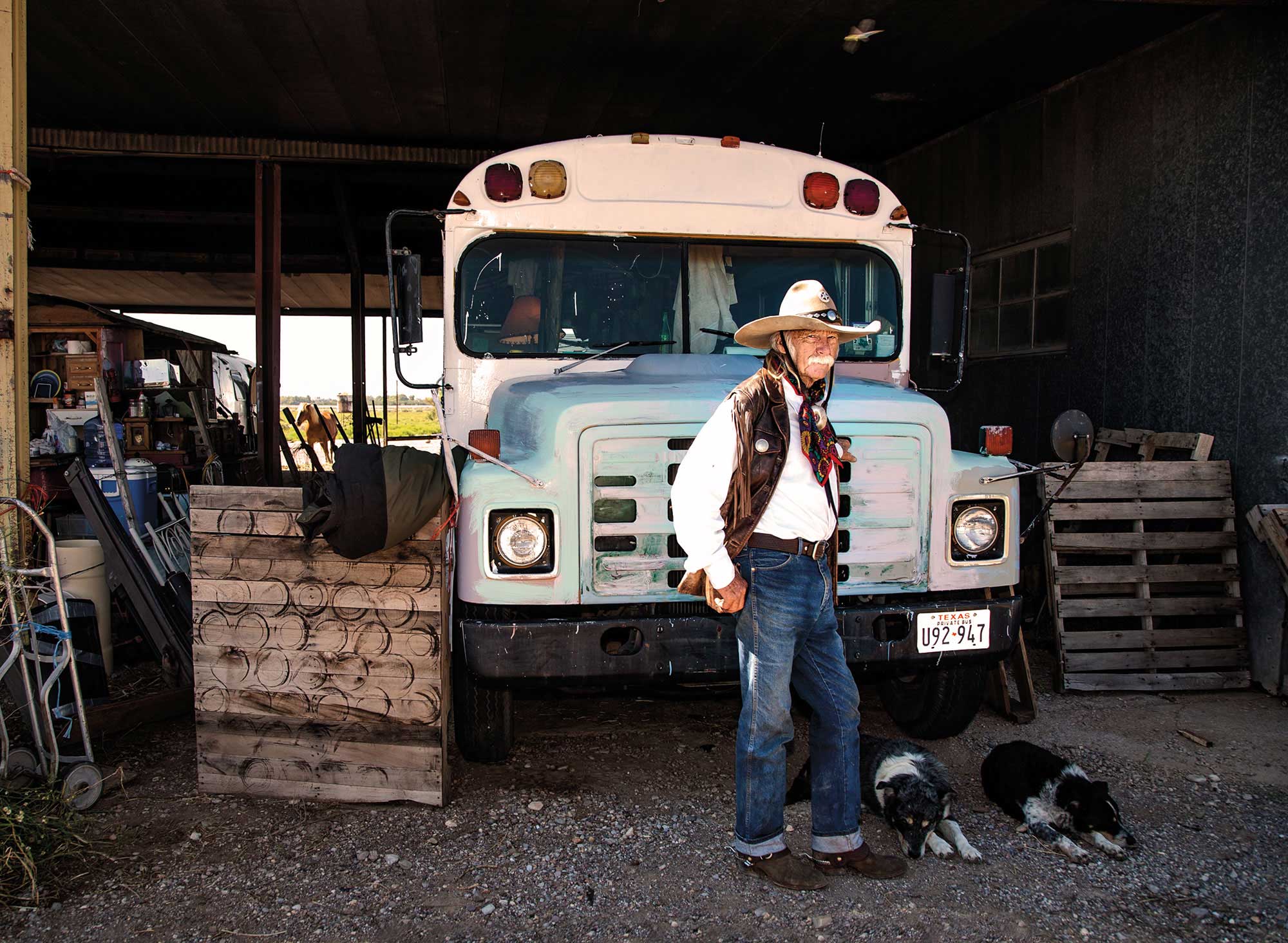 Ruidosa offers two detours. One is 8 miles north on adequately maintained gravel to the Chinati Hot Springs, a desert getaway destination. The other leads to Marfa along a 52-mile route called Pinto Canyon Road, a stretch highlighted in In the Shadow of the Chinatis: A History of Pinto Canyon in the Big Bend, a new book by archeologist David Keller. The latter includes 20 miles of a high-clearance, single-track lane featuring deep washouts prone to flash flooding and precipitous ascents. In certain conditions, four-wheel drive is required.
Twelve miles northwest of Ruidosa along FM 170 lies the community of Candelaria. During heavy rains, runoff fills a resaca—a dried-up river channel—that occasionally floods the road. FM 170’s blacktop didn’t reach Candelaria until 1985. Perhaps because of its delayed connection to the rest of the modern world, Candelaria still feels like its 19th-century iteration as a ranching settlement comprised of the determined who put down roots and made a go of it. Candelaria’s cluster of adobe homes, kitchen windows illuminated at dusk, and handful of streets lively with children at play suggest that the undaunted have remained. It’s only the pavement that gave up.