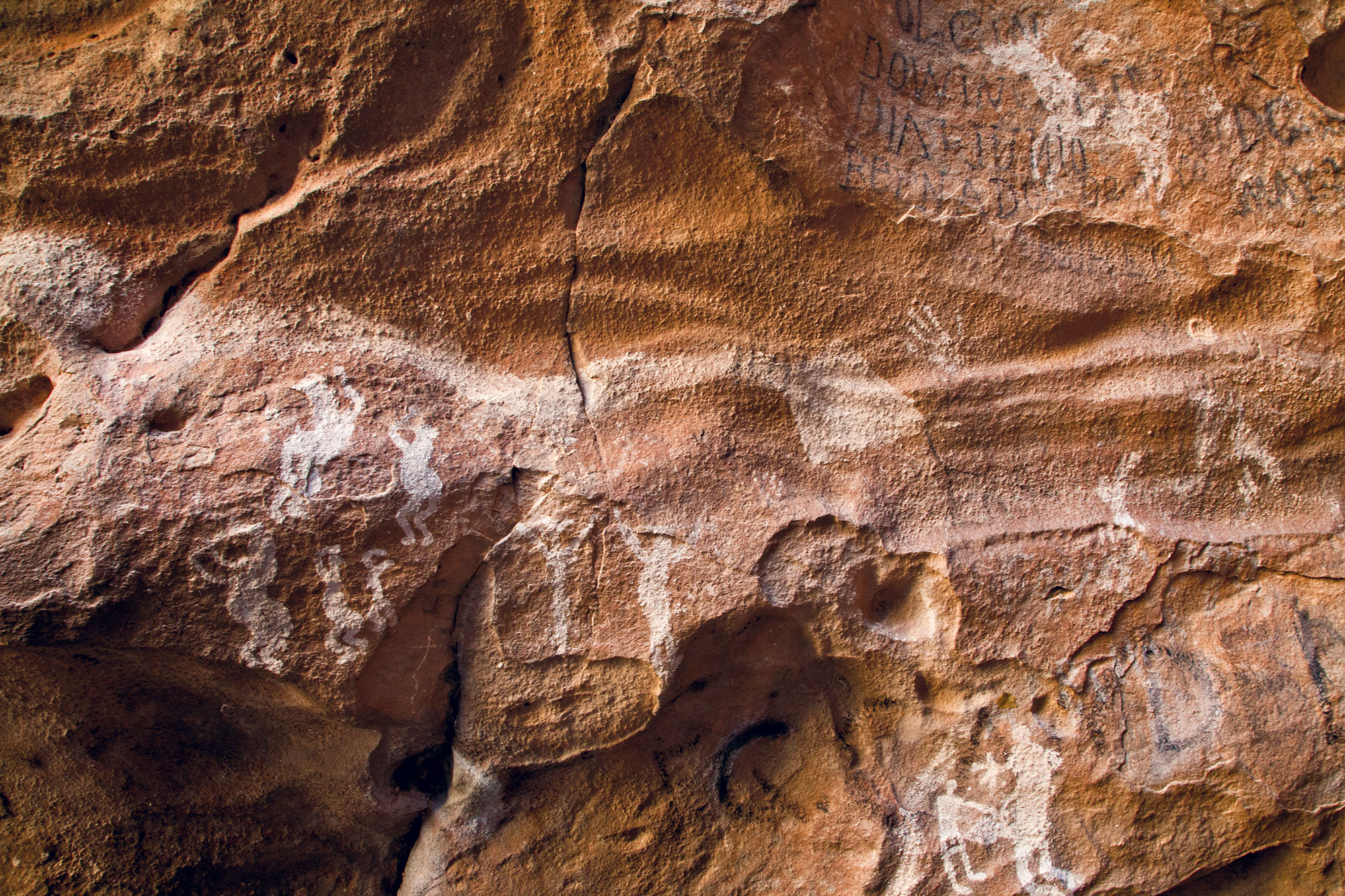 We need to talk quietly as we approach the White-Horned Dancer,” Harry Stone calls over his shoulder in a stage whisper. “Even the vibrations from our voices can damage the pictographs.”

Stone and his wife, Susan, are volunteer tour guides at Hueco Tanks State Park & Historic Site. They lead the way as I follow to the base of a cliff, where an overhanging rock provides natural shelter. There on the face of the rock is White-Horned Dancer, a 4-foot-tall painting of a shaman-like figure with outstretched arms and giant horns. A few feet to the left is a tiny rust-brown deer. To its right is a faint figure thought to be a feathered serpent.

The images may be a thousand years old. But the longer I stare at White-Horned Dancer’s face, the more it seems to stare right back at me, as though it could come to life.

At Hueco Tanks, 30 miles northeast of El Paso, four mountains of granite-like rock soar out of the desert landscape. The surface of the rock is covered with huecos—Spanish for hollows—formed through millions of years of erosion. Because the huecos hold water, this oasis has attracted humans for more than 10,000 years. Some left their mark: Hueco Tanks is home to more than 3,000 pictographs, including the largest number of ceremonial mask paintings in North America. 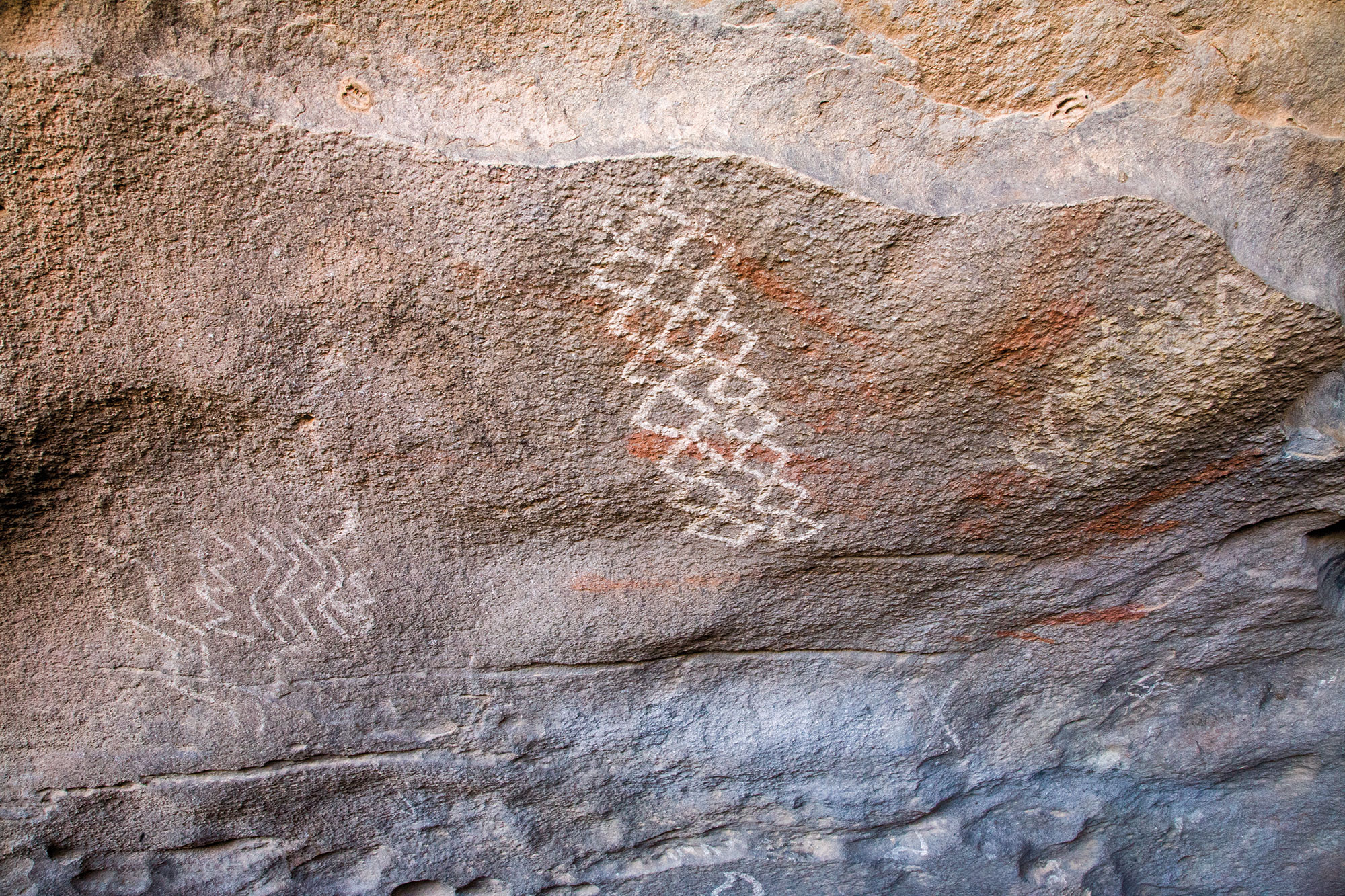 Early hunters and gatherers painted geometric designs and hunting scenes at this oasis in the desert.
Photo: Brandon Jakobeit

The Jornada Mogollon left behind the images we’re seeing on today’s tour. I follow the Stones beneath a rock overhang where a pictograph thought to be Tlaloc, the Mesoamerican rain and storm god, gazes at us from the roof overhead. Beneath another outcropping, we study the red-outlined face of what may be the deity Quetzalcoatl, the plumed or horned serpent. Religious beliefs likely traveled the trade routes, Susan explains, which accounts for the appearance of Mesoamerican deities this far north.

The longer I stare at White-Horned Dancer’s face, the more it seems to stare back, as though it could come to life.

Susan points out another inches-tall pictograph, a face with a crown, near Quetzalcoatl. I can barely see it. “Here,” she says, handing me her smartphone. “Look at it in DStretch.” On her screen, the pictograph suddenly pops with bright color, revealing the shapes and outlines. DStretch, a digital image enhancer, lets the user emphasize colors and sharpen the contrast of a pictograph—even one that’s barely visible to the naked eye. In 2017, the app helped researchers find previously undiscovered pigment in 31 locations.

Throughout our tour, the abundance of wildlife reminds us we’re in an oasis in the desert. Cottontail rabbits and roadrunners dart across the path, and on the mountains above we see a family of aoudad, a mountain goat-like animal imported from North Africa in the early 1900s. At our last pictograph site, we file into a crevice between boulders only to stop short, startled by a family of javelinas. They’re equally surprised, and they hustle farther into the shadows, allowing us to peer safely at the faint red outlines of a Jornada Mogollon face.

After our tour I strike out for the Cave Kiva on North Mountain, where the Jornada Mogollon painted eight faces. The rock radiates the heat of the afternoon sun as I climb the mountain’s steep face. At last I find the entrance to the cave, which is really more of a hollow beneath a giant boulder. Still, I have to crawl for a few feet until the space widens enough for me to sit up. The rock surface beneath the boulder is cool and worn slick by countless hands.

Once I’m inside, I see the eight reddish faces on the curved surface of the rock. One has two long horns; another has what looks like a halo or crown. A breeze whispers through the cave, a fly buzzes, and then the space fills with a dense, alert silence. I am completely alone, except for a solitary bat suspended in an alcove overhead. Yet as the faces’ blank eyes stare at me, I feel connected to the people who made these paintings a millennium ago. We all found this hidden spot tucked into the rock and sat in quiet contemplation. I linger for a few more minutes, savoring the cool and the silence, before making my way back down the mountain.

Bouldering at its Best

Hueco Tanks is considered a world-class rock-climbing destination. Restrictions in place since the early 2000s balance climbers’ and hikers’ interests with protection for the pictographs and the park’s delicate ecosystem. Because the number of daily visitors is limited, arrive early or call the park in advance to reserve a permit—especially when visiting on a weekend or holiday. For guided hiking and rock art tours in restricted areas, which are offered Wednesday-Sunday, call the park at least a week in advance to reserve a space.