A Historic Project Between Mexico and the U.S., Amistad Dam Marks Landmark Anniversary

With Lake Amistad, the dam helps protect residents while offering fun for outdoor enthusiasts and tourists 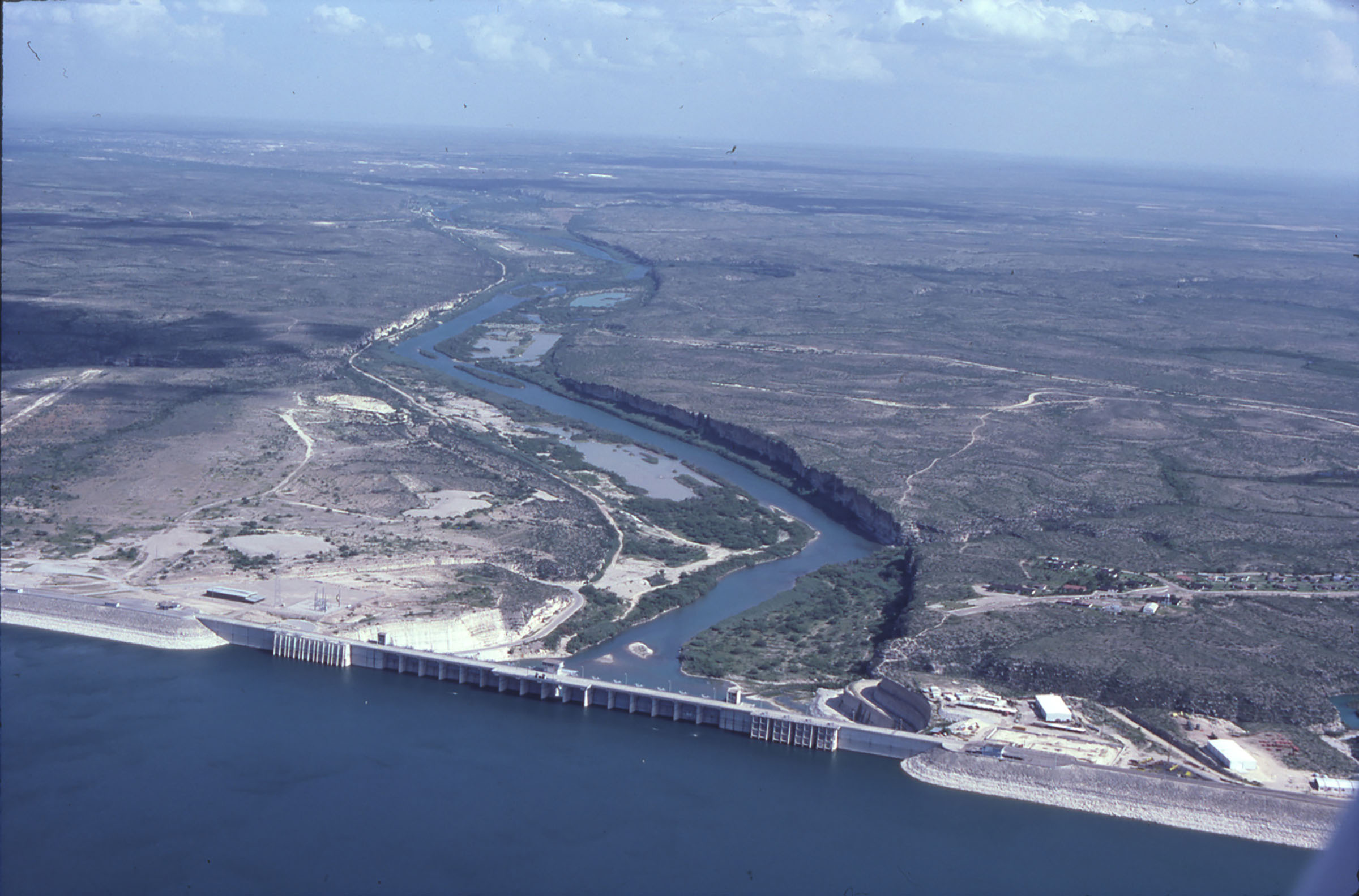 It was the flood to end all floods.

On June 28, 1954, remnants of Hurricane Alice dumped more than 30 inches of rain in and around Del Rio and Acuña, its sister city across the Texas-Mexico border. Described by one newspaper as a “a mad giant,” the Rio Grande started overflowing its banks, taking out roads, bridges, and railroad tracks, destroying vehicles and buildings, and forcing thousands of people to flee to higher ground. By the time the water had subsided, the flood of 1954 left dozens of people dead.

This Saturday marks the 60th anniversary of the historic agreement between the United States and Mexico for the building of the dam. Normally celebrated with the Fiesta de la Amistad (the “feast of friendship”), this year’s annual festivities had to be canceled because of the coronavirus pandemic. The events typically include a parade, Miss Del Rio and Miss Acuña pageants, and the Abrazo Ceremony commemorating the agreement. Instead, the Del Rio chapter of the International Good Neighbor Council, the group that organizes Fiesta de la Amistad, put together an exhibition at the Whitehead Memorial Museum in Del Rio and scaled down the other events, including a smaller ceremony on the dam with the mayors of Acuña and Del Rio and an online “catching up with” series featuring former Miss Del Rios.

“We started the year off with grand plans. We invited the president,” says Dora Alcala, a former mayor of Del Rio who has served as president of the IGNC. She explains that over the years presidents Eisenhower, Johnson, and Nixon have all visited the area to mark different milestones of Amistad Dam, including its completion in 1969.

The history of the dam actually goes back two decades before the record-setting flood. The Water Treaty of 1944, signed by the U.S. and Mexico, called for the joint construction of two or three large dams and reservoirs along the Rio Grande. These structures would control floods, provide water for irrigation needs, and permit the future production of hydraulic energy. The first dam, Falcon, was completed in Starr County, downstream on the lower Rio Grande, in 1953.

Around the same time, Texas Gov. Allan Shivers established the Good Neighbor Commission to build relationships between the two countries. Being on the border, he wanted the state to take advantage of business opportunities and tourism, Alcala says.

“At that time the councils were very strong. We had very strong ones in Austin, San Antonio, Del Rio, Laredo, and Monterrey, Mexico,” she says. “Today we don’t have a chapter in Austin or San Antonio. Times are different, but our community still thrives. It goes back to our jewel, Amistad Dam.”

About five years after the 1954 flood, the International Boundary and Water Commission presented a report to the U.S. Senate, stating there was an “urgent need” to construct the second dam. Originally named Diablo, the dam was to be located about 1 mile below the Rio Grande’s confluence of the Devils River and about 12 miles north of Del Rio. Funding for the project would be based on water allocation between the countries, around 56 percent for the U.S., and 44 percent for Mexico.

Once money was authorized by Congress, President Eisenhower and Mexico President Adolfo Lopez Mateos made a joint declaration on Oct. 24, 1960, to construct a dam “inspired by the true friendship that binds the governments and the peoples of the United States of America and Mexico and by the fruitful cooperation that has characterized their relations.” By that point, the name “Diablo” was deemed not “friendly enough,” so the name was changed to Amistad.

According to Gibson, prior to the flood there was a preliminary design for a “considerably smaller” dam. “The 1954 flood gave them new information,” he says. “The dam they had wouldn’t have held this flood, and that’s why I believe this dam has so much storage capacity.” The reservoir’s surface area is 85,802 acres.

Designed by the Corps of Engineers, the dam was constructed with 16 gates that each measure 50 feet wide and 55 feet tall. Made of compacted earth, it stretches 6 miles (including the embankments on both sides), and rises 254 feet above the riverbed. It took about six years to build.

Alcala remembers locals going to watch the massive construction project. “They didn’t have any security,” she says. “My brother worked there, just carrying buckets. They hired a lot of young people to work as laborers. You could drive almost all the way to the site.” 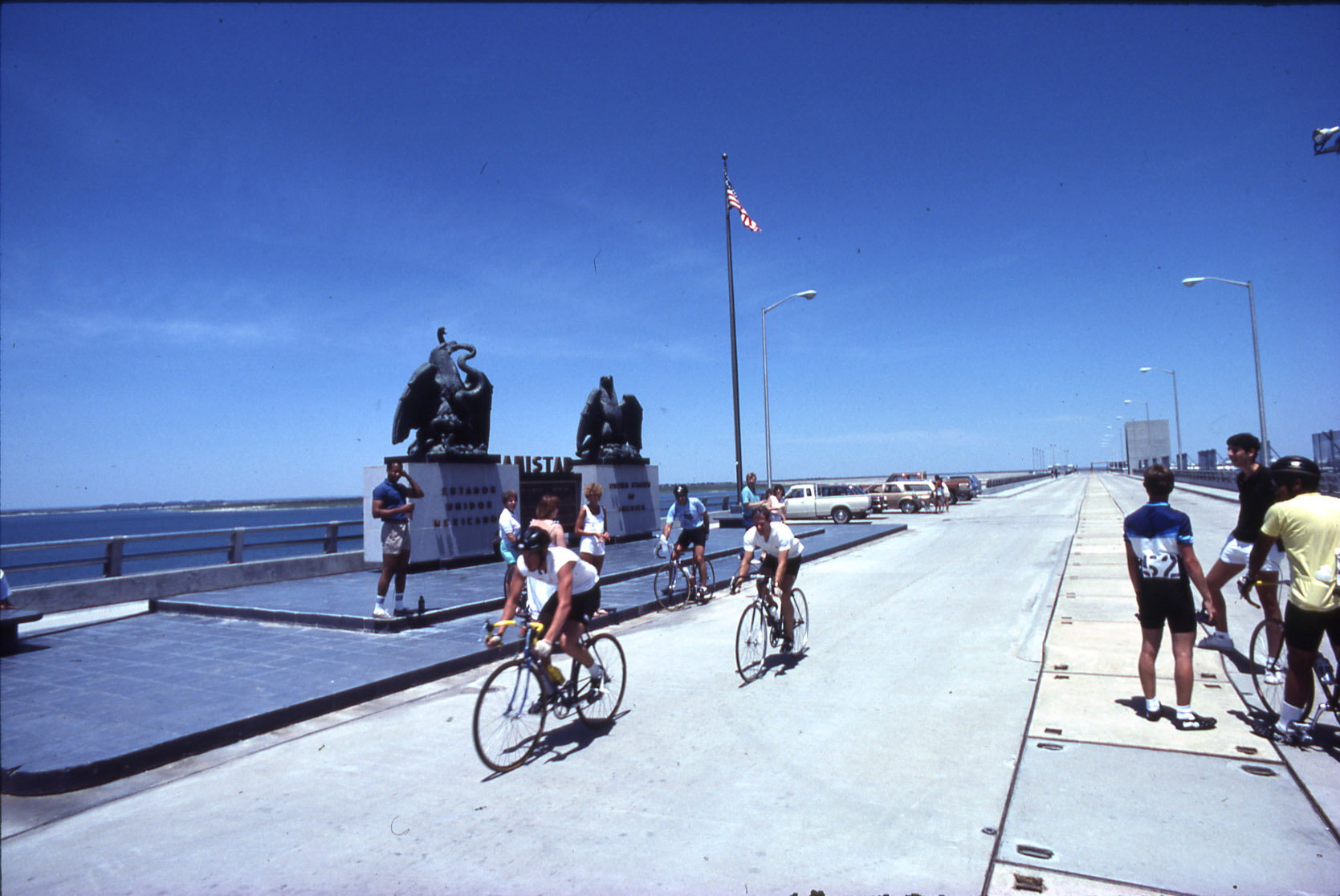 Cyclists pass the international boundary marker on 6-mile-long Amistad Dam in 1986. At the site of the Amistad Eagles, presidents Richard Nixon and Gustavo Diaz Ordaz dedicated the dam in 1969. Photo by Bill Reaves.

Costing more than $120 million, the dam was completed in 1969. Ports of entry for both countries were located at each end of the dam, and people could walk along the dam and take pictures at the massive eagle sculptures that mark the midway point. In the 1980s, power plants were added by both countries, completing the intended goals of the Water Treaty of 1944.

Over the years, the reservoir, Lake Amistad, has helped the area by attracting fans of fishing and other outdoor activities. “Not only did it take care of flood control and irrigation, it also took care of some economic development by bringing in a lot of tourism,” Alcala says. “We get tournaments, national and international, at Lake Amistad.”

In recent years, things have changed along the border. After 9/11, the port of entry on the U.S. side was moved a couple miles inland from the dam. Currently, because of the pandemic, the gates of the border are closed to any traffic. (Locals are hopeful that it will reopen soon.) And while there have been some strained relations between countries, Del Rio and Acuña continue to work together as sister cities. “That relationship has always been really good and is still very active,” says Elsa Reyes, producer of the Miss Del Rio pageant.

Built to withstand a flood like the one in 1954, Amistad Dam has more than met the needs of its two neighboring countries. And at 50 years old, it is still in “excellent condition,” Gibson says. “It will be in better shape than I am when it’s 100 years old.”