These familiar silhouettes, and the simple technology they embody, helped settle the rural byways of Texas 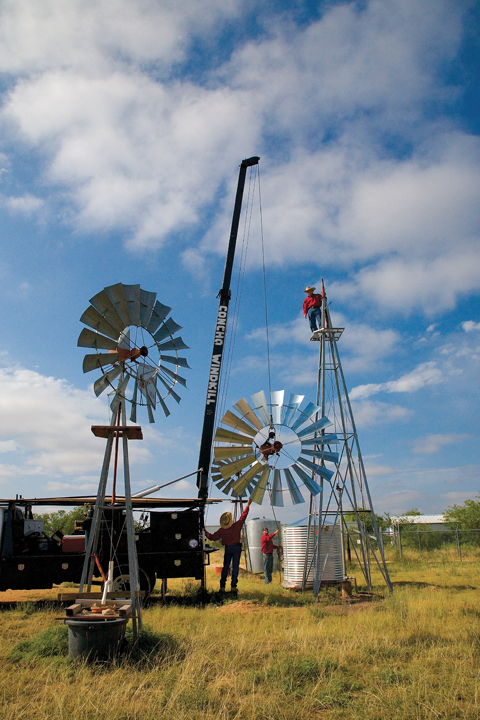 A crew from Concho Windmill and Pump Service mounts a wheel atop a tower on the Aermotor Company grounds. (Photo by E. Dan Klepper)

Travel down any Texas highway, regardless of direction, season, or time of day, and you will pass a windmill. Four-lane interstate or farm-to-market blacktop, it makes no difference what route you choose, because sooner or later you will see the familiar silhouette—a tower anchored to the landscape with its wheel and vane at rest in a windless lull, or turning gently in a breeze, or spinning wildly like a tilt-a-whirl.

The windmill is the workhorse of arid lands, independent but dependable, and ubiquitous as a fence post. Like the bluebonnet, it tends to pop up in ideal vistas, almost natural in its familiar shape, yet forged from human endeavor.

The windmill makes water from wind, a concept of mythical proportions but practical in a decidedly earthbound way. Wind provides the power, and the windmill, defying gravity, pulls water up from a subterranean source. The whirring wonder’s extraordinary results catalyzed a precipitous turn of events in the modernization of life on American prairies and deserts. Windmills made settlement possible throughout the rural byways of Texas; in fact, the entire West could not have been settled without them. Pioneers could settle in otherwise uninhabitable regions, and railroads, powered by fire and wind-conjured water, could crisscross the country allowing the exchange of goods and ideas.

Between 1854 and 1920, more than 700 companies in the United States manufactured thousands of windmills. Today, only two of those companies remain in business, and one, Aermotor, is based here in Texas, in San Angelo.

It was a roundabout journey for Aermotor, a Chicago company that was started in 1888 by inventor La Verne Noyes and ended up, 120 years later, in the capable hands of Bob Bracher, president of a group of West Texas ranchers who purchased Aermotor in 2006. Bracher happily provides tours of the 30,000-square-foot San Angelo factory, a machine enthusiast’s dream, where almost every part of an Aermotor windmill is made. Sails are stamped from sheet metal, punch presses knock out sail ties, shaved and polished gears bathe in a waterfall of oil; main frames are threaded and drilled, hub shafts undergo refinement, and vanes and helmets are hammered and shaped. The process is a remarkable syncopation in practice for more than a century. The parts are stored along factory aisles-gears interlock in layers, eight-foot vanes are shelved like giant library books, and hoods nest in stacks. Occasionally, there’s a special project in the works, like a large metal star built for the center of a windmill wheel. The few parts and processes not handled in San Angelo are manufactured and performed elsewhere in Texas, making the Aermotor windmill entirely American-made.

Only 45 Aermotor windmills were sold the first year the machine hit the market. But in 1892, Aermotor sold 60,000 of its “mathematical” windmills as they were called by competitors (because of extensive scientific testing of the model to maximize efficiency), first derogatorily and then with awe as Aermotor captured more and more of the market share. The Aermotor had greater lifting power and smoother pumping action, making it the favored windmill for westward settlers.

With mass production in place, Aermotor could drop its windmill prices to about one sixth of the original cost, selling eight-footers for around 25 dollars. An eight-foot windmill will typically pump 180 gallons of water in a 15 to 20 mph wind, raising the water approximately 175 feet from an underground well, features that met many of the early settlers’ needs and made the eight-foot Aermotor a top seller. In fact, according to Bracher, the eight-footer is still the favorite today.

Early windmill design in America utilized wheels, vanes, and other parts made of wood with only moving, mechanical parts cast in iron and steel. A significant increase in steel manufacturing throughout the first half of the 20th Century, along with the rise of mass production, enabled Aermotor to convert the wooden windmill market to steel. Aermotor parts are now constructed with the highest quality metals available, and each windmill is accompanied by a seven-year warranty. Considering the fact that fully functioning Aermotor windmills, some approaching the century mark, are still working across the Texas landscape, a warranty may not be all that necessary.

“Nature works for nothing,” an 1898 windmill advertisement reads. The windmill repair man, however, does not. Just ask windmiller Chad Peterson, owner and operator of Concho Windmill and Pump Service. Peterson and his crew, based in San Angelo, travel throughout the country repairing old windmills and erecting new ones. Concho is a favorite whenever Bracher needs a new Aermotor windmill installed.

“Everyone loves a windmill,” says Peterson, “even a broken one. Farmers and cattle ranchers still need them fixed, and gentleman ranchers want new ones. We install them, maintain them, and repair them. We even custom-paint them in whatever color or design you want.”

Windmills are inherently simple. Should one need a repair, there’s usually a simple solution. “If just one piece of a windmill is broken;’ explains windmill restoration expert Paul Cowley, “the whole thing won’t work. Find the broken piece, and you’ve got it fixed.” Cowley buys, sells, and trades windmills and windmill parts, a welcome service in an industry where some repair jobs require pieces decades old. At his parts yard, a literal graveyard for broken windmills along US 82 in the tiny Panhandle town of Ropesville, windmill parts are everywhere, from gear sets to blades, towers to wheels, weights to vanes—all loosely organized in a system known only to Cowley. Cowley also restores antique windmills and gives new life to classic windmill styles that have vanished with time. Some of his superb handiwork can be seen at the American Wind Power Center in Lubbock.

Among the 28 acres of spinning wheels across the American Wind Power Center’s grounds, the beautifully restored wooden Axtell Standard stands out (Cowley restored the wheel and tail). The 22-and-a-half-foot, hand-wrought wheel, once a common sight across Texas farms of the early 1900s, sings with the voice of the wind. The pale, slender blades capture dusk light like lace curtains, holding the day’s last rays before tossing them windward and into the night.

The restoration of the Axtell Standard, along with the rest of the windmill collection at the American Wind Power Center, is the culmination of efforts by the late Billie Wolfe, a faculty member of Texas Tech’s then-College of Home Economics, and a dedicated windmill researcher. Wolfe spent 30 years traveling the country in search of early windmills, interviewing farmers and ranchers, and shipping what she could acquire back to Lubbock. In 1992, she learned of an intact collection of beautifully restored windmills in Nebraska owned by a man named Don Hundley. Together with Coy Harris, a Lubbock native and CEO of Wind Engineering Corporation, Wolfe established the nonprofit National Windmill Project to provide a permanent home and museum for Wolfe’s acquisitions, including the Hundley collection.

Wolfe passed away in 1997, but the work continued. By 1998, Harris had secured the Lubbock location and enough funds to construct the museum and establish the surrounding grounds. Today, the American Wind Power Center offers visitors a look at more than 150 wooden and metal windmills and wind turbines, spanning the history of the American windmill from the early Halladays, with their collapsing wheels and draft horse counterweights, to today’s giant megawatt wind turbines.

The Wind Power Center’s Dempster No. 4, manufactured in 1900 by the Dempster Mill Manufacturing Company of Beatrice, Nebraska, is particularly stunning. Called a vaneless, sectional-wheel-style mill, the Dempster has blade sections that pivot, modifying the amount of surface exposed to the wind, opening and closing with the wind speed like an umbrella. These vaneless mills used a counterweight system to keep the wheel facing the wind. The weights themselves, cast in the shape of chickens, draft horses, squirrels, cows, bulls, footballs, and even battleships, added whimsical highlights to straightforward functionality.

The Wind Center’s Southern Cross, an Australian-made steel wheel, dominates one end of the museum’s interior, rotating via continuous electricity. Another popular windmill is the Dandy, a nine-foot silver wheel manufactured in 1890 by the Challenge Wind Mill and Pump Company of Batavia, Illinois.

The 165-foot-tall Vestas wind turbine, which generates the museum’s electricity needs with more to spare, provides an example of the power-towers Texans can see on the state’s many wind farms. The Center has also disassembled one of the behemoths for close-up inspection. Each of the turbine’s three blades measures 112 feet long and weighs 12,000 pounds.

Visitors to the Center may want to conclude their windmill tour by driving US 84 from Lubbock to Sweetwater, and east on I-10 to Abilene, at dusk to view the remarkable array of turbines anchored across the miles of plowed fields. Tall enough to require aircraft-warning lights that pulse red throughout the night, wind turbines signal a future source of the state’s electrical power.

Wind gives the windmill its long-lived vitality, and the windmill, human-made, gives us our purpose for the wind. Ironically, wind is often the source of a windmill’s demise, collapsing towers, shearing blades, and wrapping tailbones around shafts and gear boxes. But while the force of the wind is mighty, it proves no match for the magic of the windmill. Even in its twisted, hapless shape, a windmill is a thing of beauty, somehow transcending function with form, exposing the underlying truth of another windmill ad from the 1800s that reads more like poetry than pitch. “Her forces,” it assures us, “are never exhausted”.