A new podcast, book, and museum exhibit hope to set the record straight about the historic Mexican independence movement 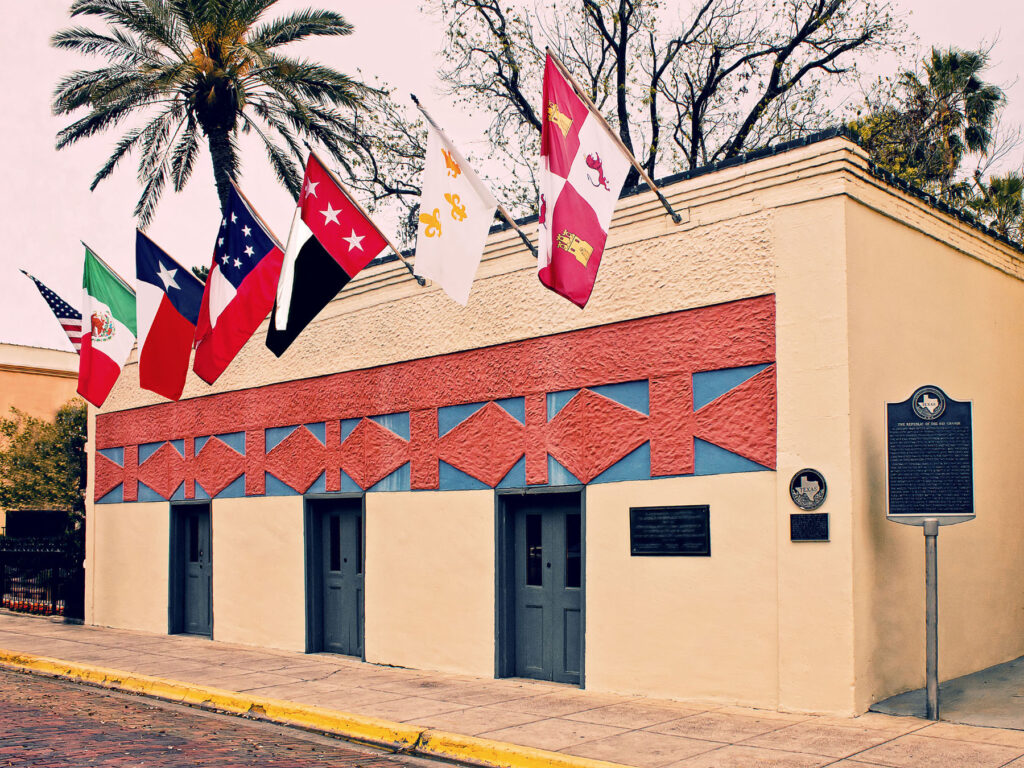 “This is gonna make such an amazing miniseries one day, isn’t it?” gushes Brandon Seale in the eighth episode of the podcast “Republic of the Rio Grande.” As host and creator of the lively and ruminative 17-part series, Seale sets aside his day job as president of San Antonio-based Howard Energy Partners and takes on the role of avocational historian to delve into this lesser-known chapter of Mexico-Texas history.

Along with bilingual interactive and audio features and a diorama, the exhibit will have a virtual component for elementary to high school students, says Margarita Araiza, executive director of the Webb County Heritage Foundation, the organization that maintains the museum and preserves archives and other historical documents for Laredo and Webb county.

According to Lack, a retired McMurry University professor, the Republic of the Rio Grande is “a complicated story,” and one he’s been exploring for several years with the help of a research grant.

“The grant allowed me to visit archival repositories in the states of Nuevo Leon and Coahuila that to my knowledge had not been previously consulted by scholars of this subject,” he says in an email. “I also gained access to the original military records of Mexico because the government had them digitized in honor of its bicentennial year (2021).”

If the story is complicated, it’s one well worth diving into, adds Seale. “The revolt is a part of the long and often frustrating history of northern Mexicans seeking to preserve their autonomy within the larger project of Mexican nation-building,” he explains. “It serves as a helpful lens through which we can reconsider the 1835-36 Texas Revolution, however, because of all the ways that it was similar to the Texas revolt and a few important ways in which it was different.”

The independence movement developed as Mexican citizens in the northeastern states of Coahuila, Nuevo Leon, and Tamaulipas grew unhappy that the government in Mexico City provided them with little if any protection against raids by Lipan Apaches and Comanches. Sky-high tariffs and other trade restrictions also made life difficult on the northern frontier. And because it was unclear whether the Battle of San Jacinto had truly settled things between Texas and Mexico, a sizable portion of the Mexican Army lingered in the villas along the Rio Grande, requisitioning goods and provisions without payment.

The Federalists, as the revolutionists calling for greater local authority became known, intensified their activities against the Centralists, or those favoring a stronger central government, after the Mexican Congress annulled the Constitution of 1824, a document that had supported the Federalists’ position. In November 1838, Tamaulipas legislator Antonio Canales, who became the political leader of the Rio Grande Federalists, issued a pronunciamento against the Centralists in Guerrero, a villa that stands today as the atmospheric ghost town Guerrero Viejo, on the southern shores of Falcon International Reservoir.

Similar pronouncements resounded throughout the region. In early 1839, Laredo citizens celebrated their declaration with eight hours of bells ringing, cheering, and gunfire. While the Rio Grande would not be formally established as the border between Texas and Mexico until the conclusion of the U.S.-Mexican War in 1848, the between-the-nations movement included much of the area of South Texas known as the Wild Horse Desert.

Skirmishes and battles between Federalist forces and the Mexican army occurred throughout Coahuila, Nuevo Leon, and Tamaulipas. Along with citizens of those states, Carrizo Indians took up arms for the Federalist cause, as did Anglo-Texan and Tejano soldiers of fortune. While Texas President Mirabeau Lamar declined to endorse the rebellion, he allowed Canales to set up a recruitment station on the Capitol grounds in Austin. And in early 1840, Canales called for a Federalist convention on the south banks of the Nueces River at a Texas hamlet called Casa Blanca.

The meeting created a provisional government for northeastern Mexico with Laredo as its capital. But, as Seale points out on his podcast, Guerrero became the de facto seat of the short-lived government because the villa possessed a printing press.

Canales was named commander in chief of the fledgling regime, but the Federalists’ most gallant and storied warrior was one Antonio Zapata, whom Canales placed in command of the revolt’s mounted forces. Born in Revilla (renamed Guerrero after Mexican independence) in 1797, Zapata was a regional celebrity for his skill in the saddle and his bravery in battle. The Native Americans named him Sombrero de Manteca, either for his shiny hair oil or the way his perspiration made his sombrero gleam. “Chasing Zapata,” Seale says, “was like chasing the wind, except in this case the wind hit back.”

And he was motivated to fight for the Federalist cause. A successful rancher with a fine home on Guerrero’s central plaza, Zapata had all his earthly possessions—some 20,000 acres, tens of thousands of pesos, even his dead wife’s jewelry—confiscated by the Centralist government in 1838. (At least one source, however, attributes the losses to looting.) His name passed into borderland legend in the spring of 1840, when he surrendered to Gen. Mariano Arista, commander of the Mexican Army of the North, after his small force lost a battle with Centralists at Santa Rita de Morelos.

Arista gave Zapata the choice between renouncing the Federalist cause and execution. He chose death. Centralist forces escorted Zapata’s head, preserved in a cask of brandy, through Laredo and back to Guerrero, where it was placed on a pole in the plaza. By the end of that year, 1840, the revolt was no more.

Lack wasn’t kidding when he called it “a complicated story.” But he and many other historians have questioned the republic’s formal existence.

The first appearance in a scholarly account of the romantically named Republic of the Rio Grande may have been in the 1847 volume History of Mexico: Her Civil Wars, and Colonial and Revolutionary Annals; From the Period of the Spanish Conquest, 1520, to the Present Time, 1847 by Philip Young. Skepticism began, however, with a 1986 published paper by Mexican historian Josefina Zoraida Vázquez, who “asserted that the Republic of the Rio Grande was never functional,” Lack explains, pointing out that she went as far as using a Spanish word that could be translated to “so-called” in the title of the paper, “La supuesta República del Río Grande.”

“My findings,” Lack says, “validated her point that the name Republic of the Rio Grande was created in Texas and never used in Mexico itself.”

Even so, this story has all the makings of an amazing miniseries, as Seale said in his podcast. And someone else had that very idea: About 20 years ago, when I visited the Zapata County Museum of History—in the county named for Antonio Zapata in 1858—curator Evaristo Botello showed me a thick production book for a film about Sombrero de Manteca. When asked today, no one seems to have heard about the project, but perhaps it’s still out there, somewhere, its flickering images chased by the wind.

Follow along to the “Republic of the Rio Grande” podcast at sanantonioreport.org. New episodes are available on Wednesdays, with the latest episode, No. 13, titled “The Battle of Morelos.”