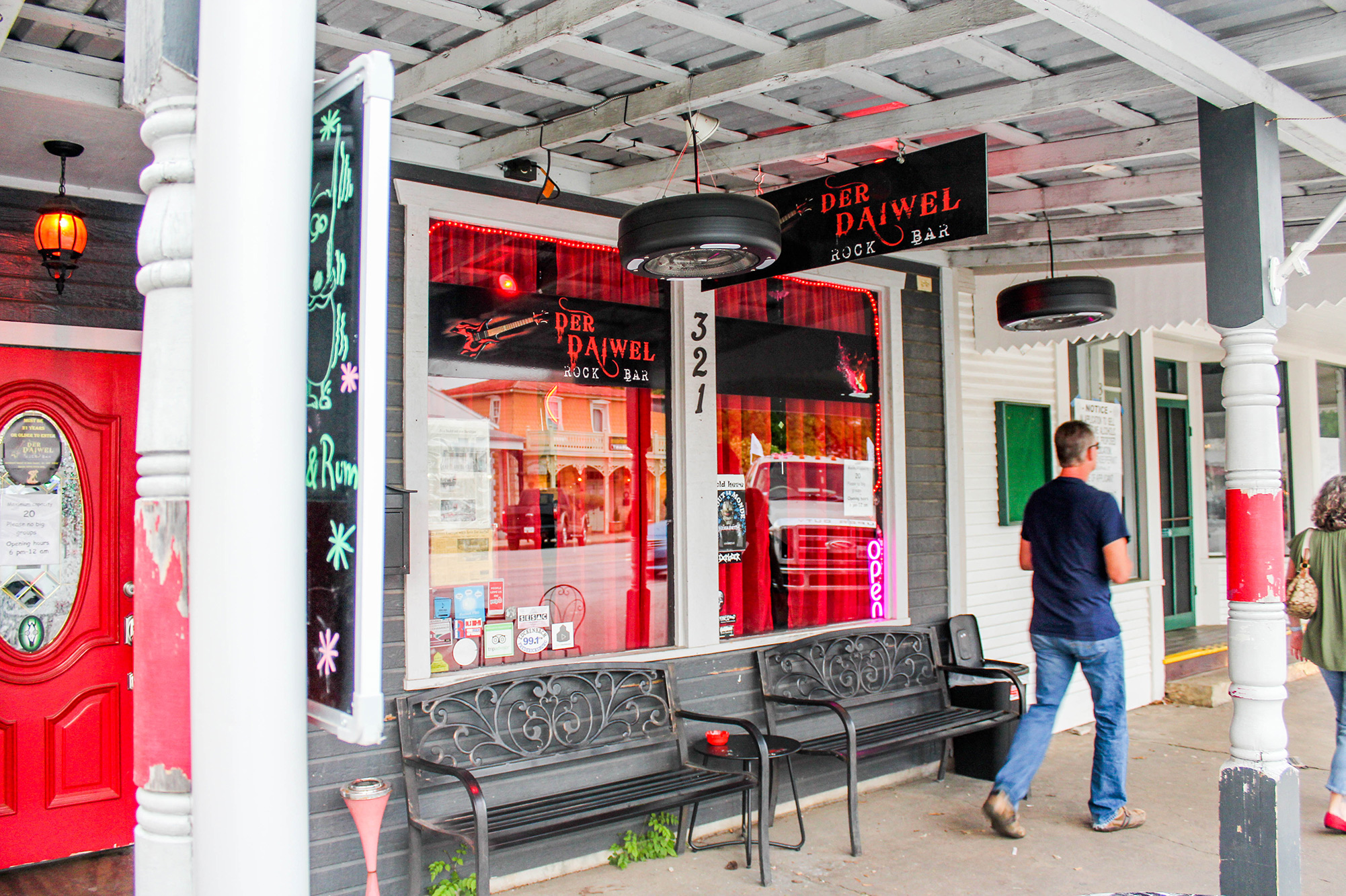 Talk of Fredericksburg normally revolves around its picturesque vineyards and authentic German food. Der Daiwel, a dive bar on Main Street, bucks those conventions. The business features no barrel-aged merlot or pan-fried bratwursts, but instead Motörhead playing from the speakers, rock-themed cocktails, and two sisters from Luxembourg behind the bar.

When Carole and Vicky Whipple first opened the bar in 2013, they heard rumors of folks calling it the “Devil Bar.” Carole says that was likely due to a misinterpretation of the name: While “der daiwel” is an expression in Luxembourg meaning “holy smokes,” it can mean “the devil” in certain old German dialects. “That, plus we have the red lights, heavy metal, and it’s dark,” Carole says. “Well, I think it scared some people.”

With walls painted black, a bright crimson bar, and only a few dim orange and red lights, the bar unsurprisingly spooked some locals at first. Once their eyes adjust to the low lighting, the memorabilia from decades of concerts covering the walls makes it clear that the aesthetic is an homage to the sisters’ favorite music genre. Even the specialty drinks are on-theme, with cocktails like the citrusy Green Demon and tangy Atomic Pomegranate.

Though some people often confuse them as German, the sisters are the only Luxembourg natives in Fredericksburg. While they appreciate the German food and culture, they didn’t move there for it. “We really had no idea,” Vicky says. “We were surprised. When you grow up in Luxembourg and you think of Texas, you think of Longhorns, cowboys, and John Wayne—you don’t think of schnitzel.” 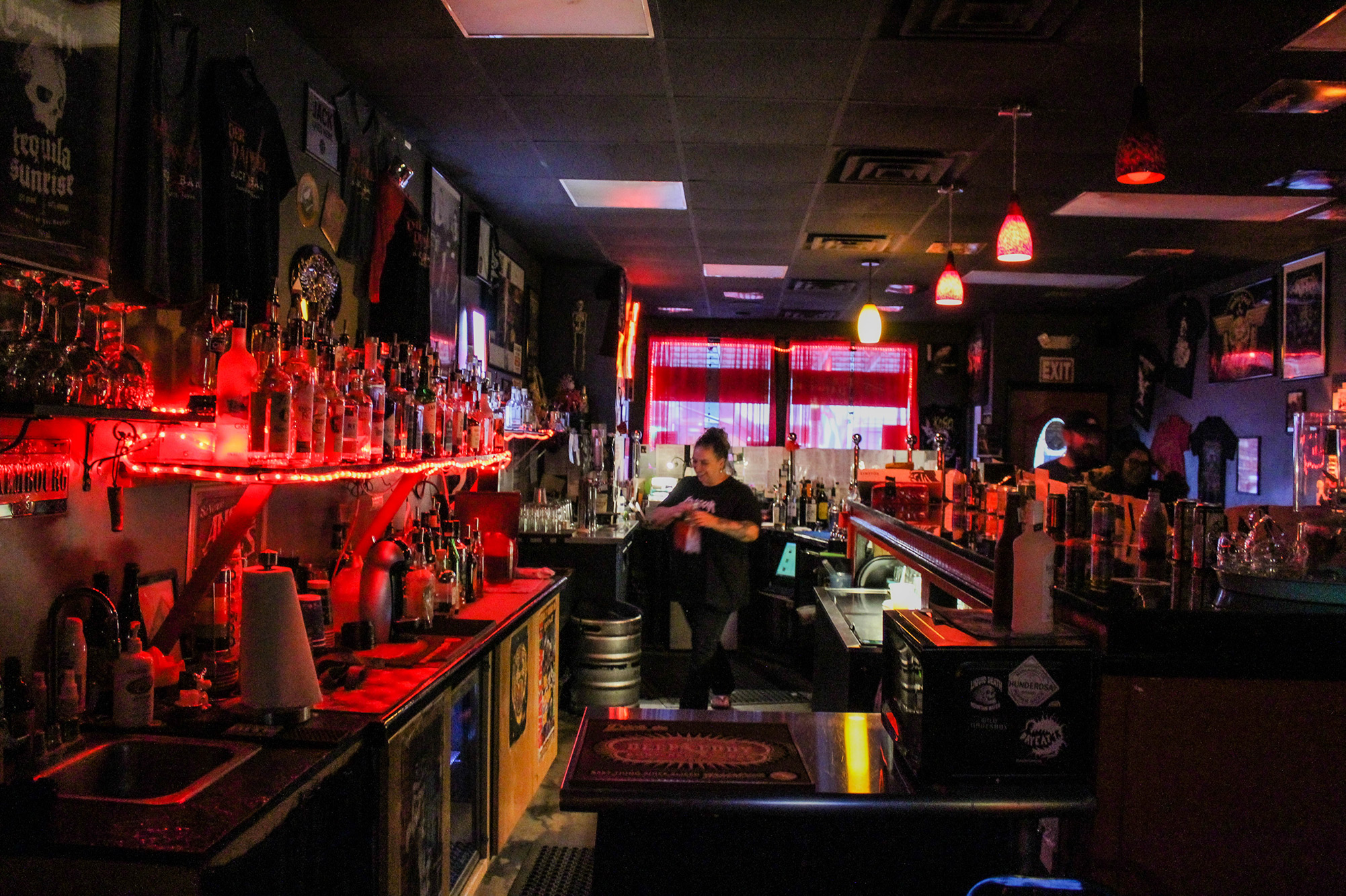 Co-owner Carole Whipple had dreamed of opening a metal bar since she was a teenager in Luxembourg.

In fact, the two ended up in Fredericksburg by accident. On a road trip through Texas in 2005, they stopped in the town on their way to Enchanted Rock and both instantly fell in love with the atmosphere.

Carole was the first of the two to move to Fredericksburg from Luxembourg in 2007. She started working as a bartender and waitress at local spots like Navajo Grill. In 2012, she convinced Vicky to join her. The sisters saw the town as the perfect spot to open a heavy metal bar, a dream Carole had since she was 18 and barhopping around Luxembourg’s robust heavy metal scene.

Though they wanted to open the bar in early October 2013, the licenses serendipitously weren’t approved until Oct. 30. So, Der Daiwel has the most appropriate anniversary for a heavy metal bar: Halloween night. The sisters say that the Fredericksburg community has worked to make the sisters feel welcome, often referring customers and offering encouragement during the pandemic.

Over the years, Der Daiwel became a go-to hang-out spot among local service industry workers because of the late hours and laid-back atmosphere. “When you say you go to a heavy metal bar to relax, it sounds odd,” Vicky says. “But we wanted to be welcoming and have a bar where people are able to talk to each other about music and work—no crowds or loud music blaring.”