Recent renovations, including an ongoing grandstand restoration project, have made the ballpark a living monument 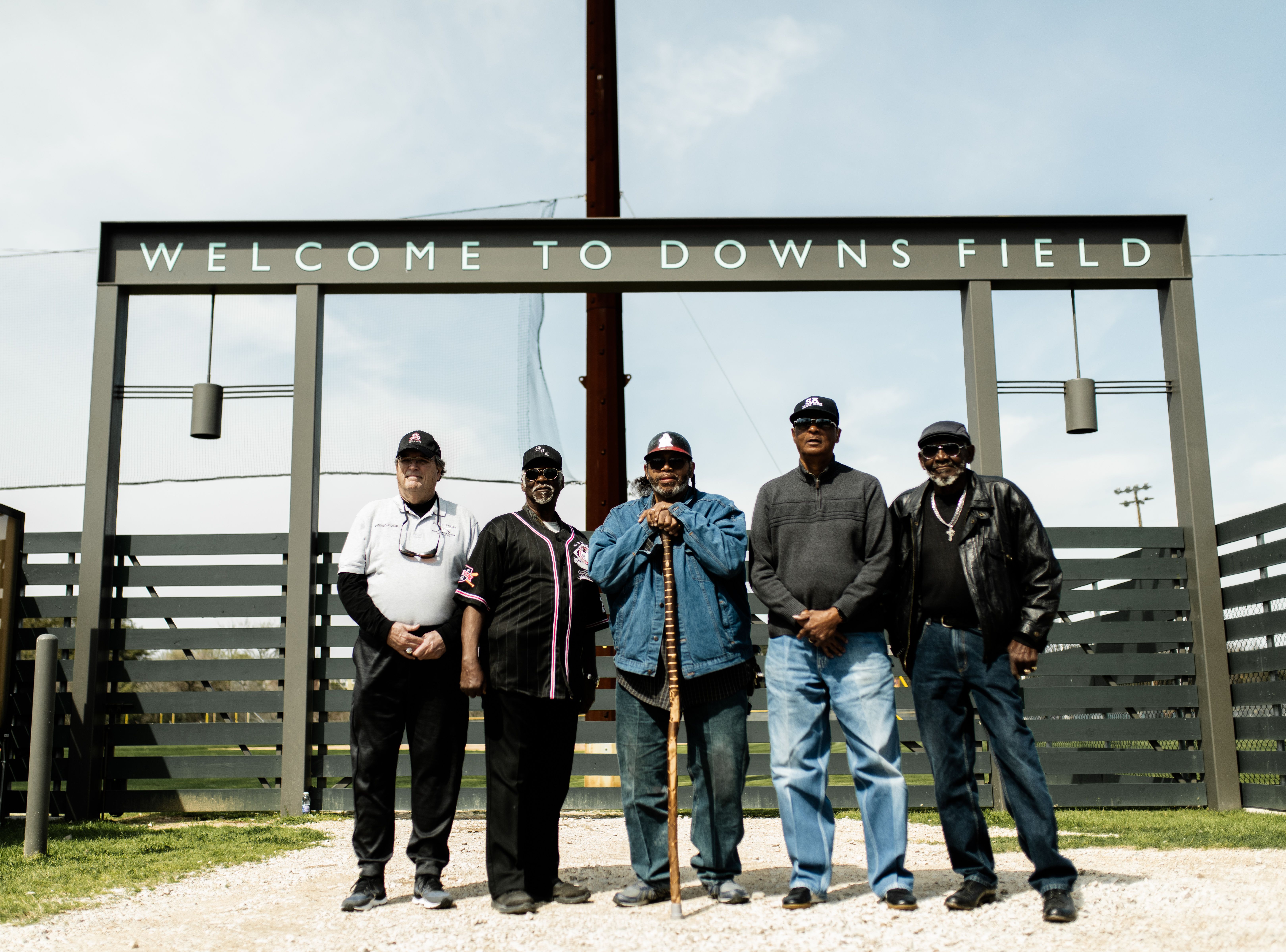 Former baseball players stand at the entrance of the newly renovated Downs Field.

Lee Dawson Jr. has lived in East Austin his entire life. He grew up playing sports at historic Downs Field and now leads young athletes as a coach and vice president of the Greater East Austin Youth Association. In addition to teaching the finer points of fielding a ground ball and the value of teamwork, Dawson—like his old coaches—educates players on the community heritage of the field.

“I get to take my kids and show them some of the history because they’re not getting it in school, just like we didn’t get it in school,” Dawson says. “To get our history, we had to get it from the adults that were mentoring us.”

For almost a century, the land adjacent to Boggy Creek on East 12th Street has served as a pillar of the African American sports community in Austin. The Austin Black Senators of the Negro Leagues—which was a collection of clubs and leagues made up of Black Americans and other players of color because of segregation—played at the location in the 1920s and 1930s. L.C. Anderson High School, which was then the only high school for Black students in the city, played football games at the field in the 1940s and ’50s. Since then, semi-professional and men’s league baseball teams have played at Downs Field. Huston-Tillotson University, a historically Black university in Austin, competes on the field every spring.

Thanks to recent renovations and improvements, Downs Field serves as an active monument to Black baseball and the Negro Leagues, which are being honored with a Centennial Celebration this year. Its impact also stretches far beyond baseball. In 1928, Austin’s city government segregated Black residents to a 6-square-mile area on the eastern side of the city, where the community developed a rich culture and community. Downs Field, named after former Samuel Huston College president Karl Downs, has become a physical embodiment of that history.

“Downs Field is as important as my mom and dad and my family,” says Gilbert Rivera, a board member of the Travis County Historical Commission who lives a few blocks from the field. “If Downs Field was a human being, Downs Field would be welcome to have breakfast in my house any day. That’s how important it is.” 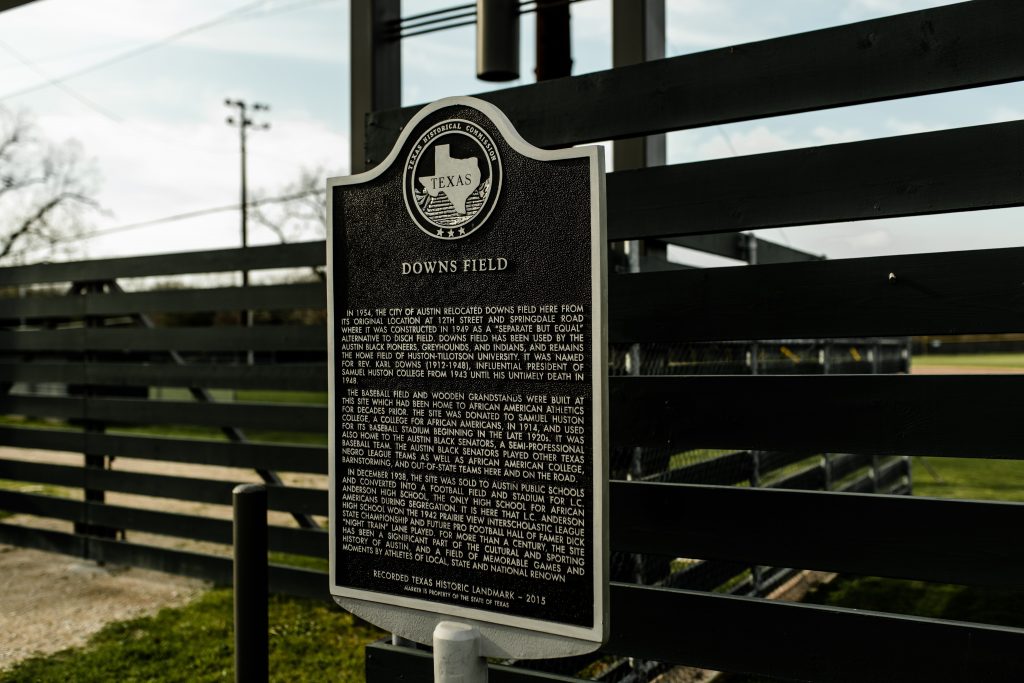 A historical marker out the fence at Downs Field.

Samuel Huston College, which would later merge with Tillotson College in 1952, first built a baseball field at the site in 1927. Named Samuel Huston Stadium, the field served as the home of the Black Senators in addition to its use by the college.

The Black Senators, which were a semi-professional squad, played against a variety of other Negro League teams throughout state and country. In Texas, there were very few organized baseball leagues for African Americans, and they usually only lasted for a few seasons. But the sport still thrived thanks to an abundance of teams and notable stars.

“Texas possessed such a vibrant black baseball community during the first half of the 20th century that African American baseball in Texas played a significant part in shaping both the history of the Negro Leagues and the game of baseball as a whole,” author Rob Fink wrote in Playing in Shadows: Texas and Negro League Baseball. “Moreover, black baseball was a major force in defining the African American community in Texas, helping establish its culture and racial pride.”

This was the case in Austin, where players such as Baseball Hall of Famer Willie Wells first learned to play ball, and the Black Senators drew big crowds.

In December 1938, the college sold the land to the Austin public school district, which built Anderson Stadium for the Anderson High School football team. About a decade later in 1949, the city built Downs Field on a different site a mile and a half away from its current location. Five years later, the city and the Austin school district swapped land, and Downs Field was rededicated at its current location of 2816 East 12th St.

“If [a Black person] wanted to play baseball, the only place you could play was Downs Field,” recalls Alvin Moore, who was the head baseball coach for Huston-Tillotson for over 35 years. “You couldn’t play at any other fields in Austin because of segregation.”

After moving to its current location, semipro baseball games on Sundays were big events, with people dressing up and lining the streets to watch the game after church. “It just [was a] community gathering place that just made you feel good,” says Willie “Big Ray” Hale, who was a batboy for two semipro teams, the Austin Greyhounds and Austin Indians, in the 1960s. “Made you forget about the troubles. Everybody seemed to respect the park.”

But as time went on, the age of the ballfield started to show. Jane Rivera—Gilbert’s wife and the former chair of the Austin Parks and Recreation board—says the city neglected the field. While players and coaches of Huston-Tillotson and the local men’s league maintained the field, they could not make bigger structural changes on the city-owned land.

In the mid-2000s, the community started fighting to improve the field. Led by the Rosewood Neighborhood Association and Six Square, Austin’s Black Cultural District, members of the community worked to earn the funding and support of the local government. In 2015, the Texas Historical Commission named Downs Field a Texas Historic Landmark, the first baseball field in the state to earn that recognition, according to the Riveras. Over the next two years, a new entrance was added to the field, along with new fencing and a historical marker. 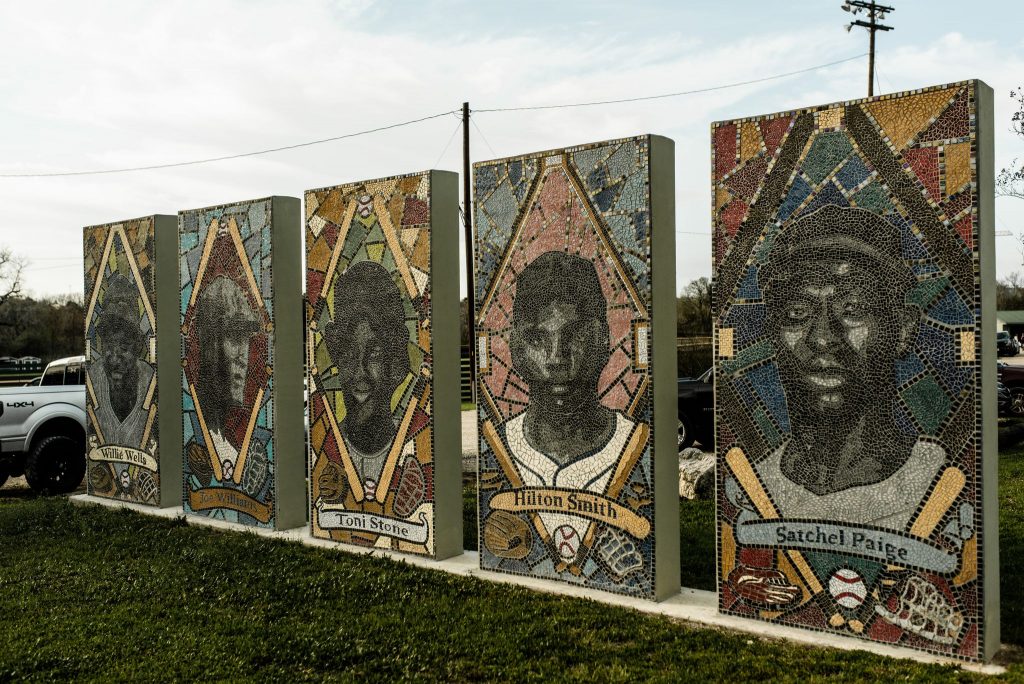 In addition to the renovations, Houston artist Reginald Adams designed mosaics for the field that included Negro League legends Satchel Paige, Hilton Smith, Toni Stone, “Smokey” Joe Williams, and Wells. Adams, who has worked on more than 300 public art projects, designed the player murals in the style of professional baseball cards from the Negro League era.

“It is important that historic communities have public art projects in them that pay homage to that space and also embrace the newness that is inevitably coming,” Adams says. “I think that is what that project has done.”

The murals, stadium improvements, and historical marker were all unveiled at a ceremony in June 2017. The next restoration will rebuild the grandstands of the ballpark, which were made by the same company that built the grandstand for Yankee Stadium in New York. According to Kim McKnight, Austin’s Historic Preservation and Heritage Tourism program manager, construction is planned to begin later this year. Jane Rivera says one of her main goals for the restorations is to make Downs Field “a gem in Austin’s crown of parks,” and she believes that when the new grandstands are completed, the ballfield will reach that level.

The renovated Downs Field today hosts the Huston-Tillotson baseball team, men’s league teams, and others, while the murals and historical marker bring light to Downs Field’s significance. Dawson said not every child in the area gets the chance to learn the history of the field from him or other coaches, but the murals serve as entry points to the history and importance of Negro Leagues and Downs Field.

“More than ever, we need to do a better job of talking about these sites that represent important touchstones for people of color, especially during times of segregation,” McKnight says. “If there’s not a marker there, if there’s not a story there to tell, those stories are lost over time.”