Visitors see a side of Houston that's dramatically different from what they see when driving through on the freeeway. 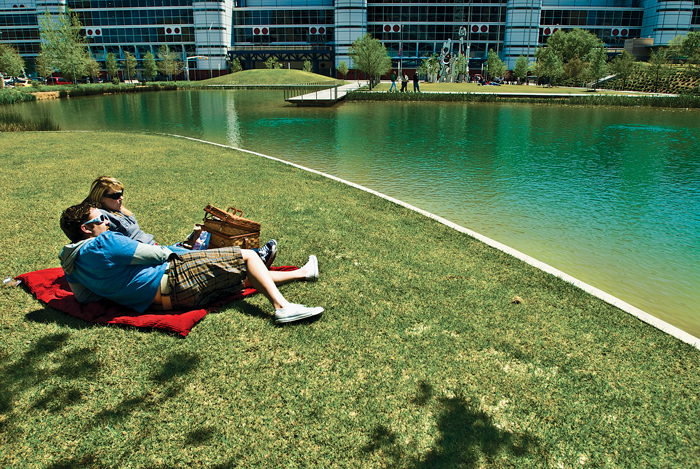 Houston has made irresistible the formerly unthinkable. The city wants you to come outside and play. Yes, Houston – especially in summer. With the development of Discover Green on downtown’s east side, the Bayou City has joined the ranks of New York and San Francisco – each renowned for their appealing urban green spaces.

When it opened in April 2008, the $125 million Discovery Green added to the new energy fueling downtown Houston’s current buzz. The megacity’s longtime love affair with growth has turned inward to the heart of town, with recent development focusing on the region formed within the crossing of Interstate 45, US 59, and Interstate 10. Coinciding with a boom in fresh dining, shopping and lodging downtown, Discovery Green replaced a string of ugly parking lots to give you dozens of ways to celebrate being outdoors, week in and week out. The park’s 12 acres lie within easy walking distance of some of Houston’s most cosmopolitan and citified attractions. Yet within Discovery Green’s tree-lined borders, visitors can relax and let nature set the pace.

But first, you’ll want to get your bearings: The heart of the park, a grassy lawn named for Houston philanthropist Jesse Jones, stretches from the city’s convention center to a tree-lined promenade named for Houston Mayor Bill White and his wife, Andrea, who helped spearhead Discovery Green’s development.

Perpendicular to this north-south promenade, a second pedestrian walkway, the Brown Foundation Promenade, follows the Jones Lawn. Here, mature live oaks cast shade over a series of wooden benches—ideal vantage points from which to watch the park’s parade of walkers and rollerbladers. And throughout the bell-shaped park, you’ll find a jogging trail, amphitheaters, fountains, playgrounds, dog runs, restaurants, and gardens.

But you shouldn’t dismiss Discovery Green as simply another park. Yes, you can drink in the fresh air and relax here, but it’s also a destination created to entertain, educate, and exercise you. You’d be hard-pressed, in fact, to encounter a dull moment. Public art, modern architecture, and subtle tributes to southeast Texas’ natural history lend imaginative touches throughout.

If you want to sail model boats, you’ll find a dedicated area on Kinder Lake, which covers more than an acre on the park’s northeast corner. If you’re ready to play croquet, you’ll find equipment available most weekends on the Grace Event Lawn. If you’d like to take in an arts performance or a film, you’ll find dozens on the schedule most months of the year. Searching for a Pilates or tai chi class? It’s here. A farmer’s market or writing workshop? Check the calendar for the right day. Throughout the year, you can count on readings and other art performances at the park’s numerous amphitheaters, stages, lawns, and meeting spaces. Oh, and just about everything is free.

Driving such a dynamic place, naturally, requires someone with unusual energy, which Guy Hagstette, president of Discovery Green Conservancy, happens to possess. A native Houstonian and downtown resident for nearly 15 years, Hagstette worked with Mayor Bill White and some of Houston’s most generous citizens to develop the right formula for an outdoor venue that could serve multiple purposes. They sought input from developers with like-minded projects in Atlanta, New York, San Francisco, and Boston, and asked fellow citizens in Texas for their thoughts, as well.

”We reached out to Houstonians, holding a series of public meetings to ask what they wanted,” says Hagstette, who oversaw a process that lasted about three years. “Like everyone in the current economic conditions, we were nervous, but the project has been incredibly successful.”

More than 700,000 people visited Discovery Green in its first year, says Hagstette. The extensive range of attractions draws locals and tourists alike. Facing the George R. Brown Convention Center and the Hilton Americas, Discovery Green even appeals to business travelers, who can leave their meeting rooms to relax and catch up on e-mail in the park, thanks to a Houston Public Library program that offers free Wi-Fi access and computer work stations.

Year-round, you see sports fans coming in for a Houston Rockets or Astros game, playing in the park, and making a day of it. The park’s position midway between the Toyota Center and Minute Maid Park makes it easy to have a meal, grab a cocktail, or take in a show before or after a game.

”Visitors come,  and they see a side of Houston that’s dramatically different from what they see when driving through on the freeway,” Hagstette says. The appeal, he says, has much to do with Discovery Green’s diverse programming and focus on Houston’s cultural scene.

Chief among the music events is the series of free Thursday evening concerts on the Anheuser-Busch Stage, where you’ll find people picnicking beneath the stars on blankets spread out next to the lake. One of last year’s most popular events returns this summer—a weekly live-music series called Sundays in the Park, which highlights performers for adults and kids through the end of June. While the live-music programs grow spare during July and August, they pick up again in September, when a group called The Fab 40 Plays Abbey Road brings together more than 40 local musicians to play the Beatles’ beloved Abbey Road album in its entirety.

In addition to ballet and other dance presentations, Discovery Green presents monthly silent-film concerts, pairing a 1920s silent movie with live music by a Texas musical group. Weekend-long art exhibits are fun and quirky: The recent Light As Air Festival brought together a collection of inflatable sculptures and included workshops.

The fun doesn’t stop when the weather turns cooler, either. Last winter, the ice-skating rink at Kinder Lake was, by all accounts, a smash hit. Look for it to return on Thanksgiving Day and last through mid-January. You can have a meal or a cocktail without leaving the park, as well. The Grove thrives as a chic but casual restaurant that often runs in high gear even on midweek evenings. That’s because chef Ryan Perawho previously won raves for his work at Houston’s Alden Hotel—tempts diners with his American rustic cuisine specialties like deviled eggs with Spanish chorizo and tapenade, along with braised Long Island duck legs with baby turnips and wild mushrooms.

On The Grove’s rooftop, a bar called the Treehouse provides a mellow spot for cocktails and nibbles, with graceful live oaks forming a border along the restaurant’s railing. Across the Jones Lawn, a casual eatery called The Lake House serves burgers, hot dogs, salads, shakes, wine, and beer. As throughout the park, a commitment to green living shines here, where all concession materials consist of eco-friendly, biodegradable products.

That may have been previously unthinkable in Houston, but it’s the new reality—at least in downtown’s new playground. Even in summer, you’ll want to get back to nature