Everything Goes to the Dogs at the Buda Wiener Dog Races

This weekend marks the 25th anniversary of the event that features a pet parade, barbecue cookoff, and mad dashes to the finish line 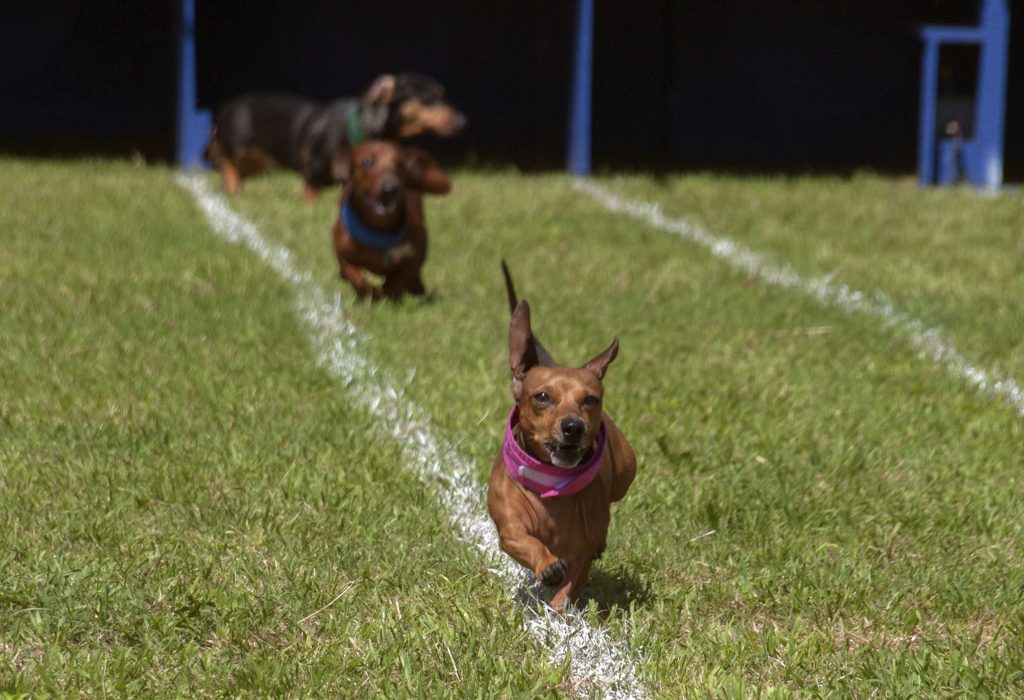 The Buda Wiener Dog Races put Buda on the map after Texas lawmakers voted to name the town the Wiener Dog Capital of Texas. Photo by Kevin B. Stillman

After the usual trumpet fanfares, the racers, distinguished by different colored bandanas around their necks, are guided into their posts. Tension fills the air as the countdown begins. At last, the gates open and, well, bedlam ensues. Guided and encouraged by their owners at the finish line 50 feet away, some contestants more or less make a beeline toward victory. Others waste key seconds heading in another direction before finishing. Some just wander out of the stalls oblivious to all competition, choosing instead to sniff the grass and pause to scratch themselves as if they were in their own backyard. Welcome to the Buda Wiener Dog Races.

After a two-year hiatus, the Buda Wiener Dog Races return to the Wiener Dog Capital of Texas on April 23-24 at Buda City Park. Hosted by the city’s Lions Club, the charitable event marks its 25th anniversary this year. It was founded by Buda Lions Club member Diane Krejci, who’d seen an identical event in Savannah, Georgia. Festivities include a pet parade and costume contest, barbecue cookoff, rummage sale, arts and crafts, live music, and, of course, lots of wiener dog races. Over the weekend, furry four-legged contestants compete in two categories: pure-bred wieners (Chiweenies, etc., need not apply) and mixed-breeds (Chiweenies, etc., are most welcome). The grand prize winner receives $500 and a year’s bragging rights.

In Texas, this is the Kentucky Derby for the spunky wee tubular pooches. At its pre-COVID peak, the event was attracting up to 20,000 attendees and close to 700 galloping wieners.

Many of the competitors come from nearby San Antonio, where the streamlined pooches are lovingly known as “lowriders.” Over the phone, Caity Colón, administrator of the San Antonio Lowriders Facebook group (with close to 2,000 followers), grows excited just talking about the approaching event. Attendees park at a nearby Cabela’s, she says, and then pile on to shuttle buses together. “It’s just Dachshunds everywhere!”

Ever the cynic, I ask if there might not be a few scraps among the dogs, because dachshunds are known to be among the feistiest of breeds. “No, I think they recognize each other,” she says. “There may be a couple of reactive ones but for the most part they all get along.”

Over the years, the races have grown in popularity and even been the subject of a “dachumentary” called Lord of the Wiens, by Buda filmmaker Elise Ballard. It’s been compared to a hybrid of Hands On A Hardbody, Seabiscuit, and Best In Show.

Speaking of cinema, each year the races have a cinematic theme, with accompanying art emblazoned on posters, T-shirts, and other merchandise. The masterfully designed swag is created by the marketing firm of Roy H. Williams, the self-described “Wizard of Ads.” He has been underwriting the competition and providing his firm’s sleek services since the event’s inception.

This year’s theme, “The Wiener King,” is a take on The Lion King, with the event’s poster featuring the muscular arms of a proud trainer bearing his haughty-eyed champion wiener dog aloft as it basks in the anointing warmth of a huge savanna sun. (You can practically hear Elton John’s “Circle of Life” playing in the background.) Previous years’ themes have included “Les Wienerables,” “Wonder Wiener,” and “Game of Wieners,” each offering attendees inspiration to design their wiener’s costume accordingly for the Saturday parade.

Back to the races: Some owners train their champion wiener dogs all year on backyard tracks. Others are just blessed with naturals. Now, as the race enters its second-quarter century and has acquired some lore, many legendary tales revolve around a Georgetown-bred wiener named Copper. Owned and trained by Michelle and Brian Shocklee, Copper dominated the early years of the races, blazing past the post in first place every year between 2001 and his retirement in 2007, save for a freak second-place finish in 2003.

Asked for the secret behind the Secretariat of wiener dogs, Brian Shocklee is flippant, saying, “Yeah, we’d just go out and throw the ball around the yard.” Clearly Copper was born to be a boss wiener.

While at the other end of the breeding spectrum within the hound family, dachshunds remain reasonably close relatives to racing breeds like whippets and greyhounds. Same hard-wiring, same yearning to fly like the quicksilver wind, but cursed with the tiniest of legs.

But it’s not about winning or even coming in a close second or third place, as far as Colon is concerned. “If they just make it across the finish line that’s good enough,” she says, laughing.

The Buda Wiener Dog Races is April 23-24 at Buda City Park and other locations. For further information on the event, including the schedule of festivities, how to register a furry contestant, parking and shuttle buses, dog-friendly lodging, and ticket prices, click here.