For the Best Enchiladas in Texas, Go Back to School in San Antonio

To make the classic Tex-Mex dish, follow the recipe based on the one served in school cafeterias since the 1950s 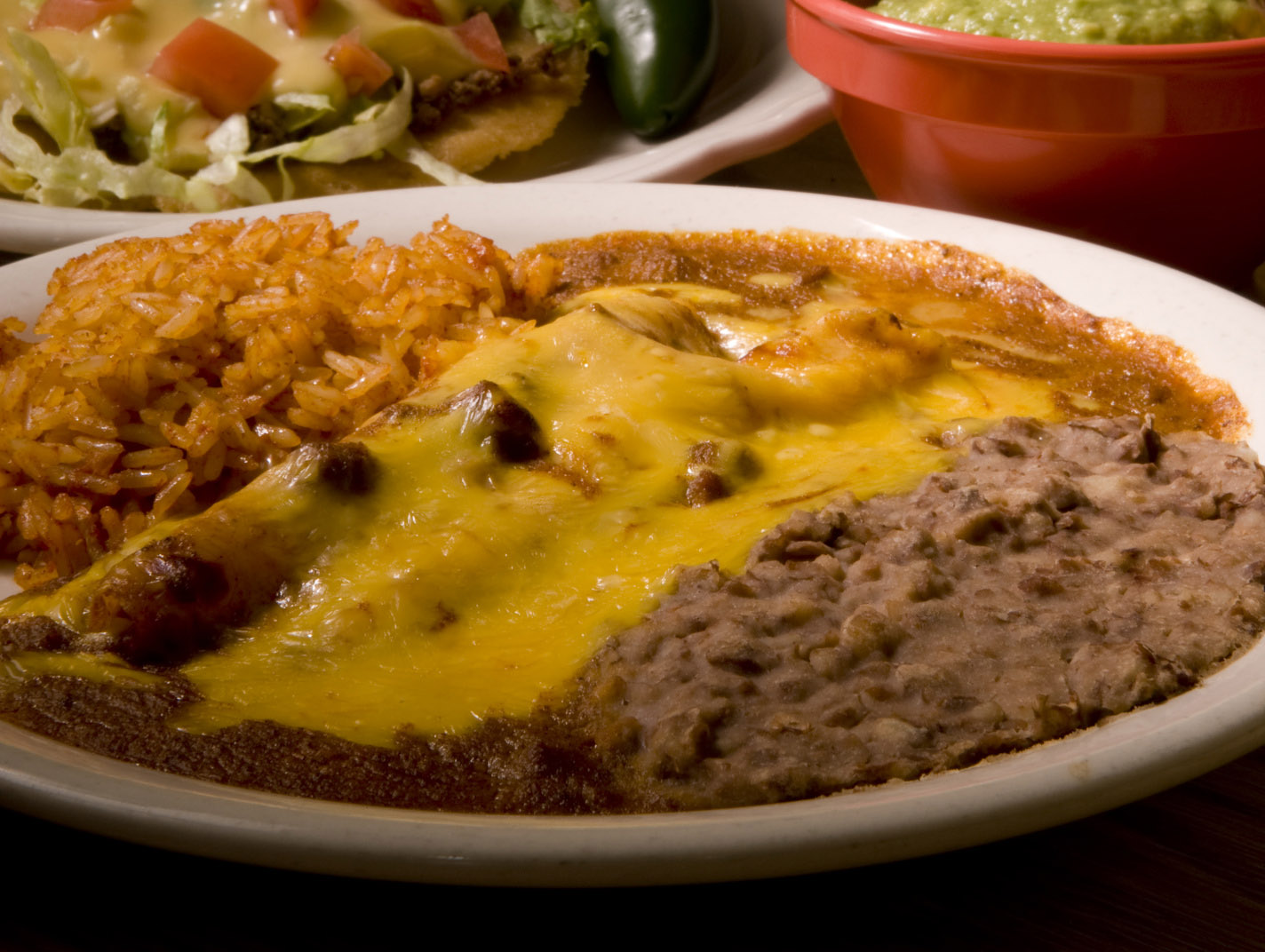 On the list of dishes Texans love to eat and argue about, cheese enchiladas exist somewhere near the top, perhaps trailing only beef brisket and chili con carne.

There are heated debates over recipes, such as what tortillas to use, which type of cheese, and whether or not to include onions. The eminently sensible and correct consensus is that you must use corn tortillas and American cheese and sprinkle the gooey fresh-from-the-oven enchiladas with diced white onion. To the certain number of crazy people who don’t, bless your hearts.

The debate also rages over where you can find the best cheese enchiladas in Texas. When on this trail, you look for a Tex-Mex restaurant of a certain vintage—the older the better. Dallas’s El Fenix, Larry’s in Richmond, and Matt’s El Rancho in Austin fit the bill. Then, there are the old-school, small-town family restaurants or greasy spoons that feature a couple of Tex-Mex dishes alongside other Texan comfort foods, like Houston’s Spanish Village (my favorite), Bandera’s Old Spanish Trail, and Austin’s Texas Chili Parlor.

But, for a certain number of Alamo City natives, despite their hometown having a multitude of contenders for best enchiladas in the state (Blanco Cafe, Los Barrios Cafe, and Jacala Mexican Restaurant, to name a few), the consensus among at least some residents is there are no cheese enchiladas better than those you got at lunch every Wednesday in San Antonio’s public schools.

That’s right. It is quite possible that the best cheese enchiladas on the planet are school cafeteria food.

I was made aware of this theory via a post at Surlyhorns.com, a message board community loosely affiliated with former University of Texas at Austin students and Longhorn sports fans. Here’s a portion of what the anonymous poster, who declined to comment for this story, wrote:

If you didn’t grow up in San Antonio, I can’t explain the cultural significance of enchilada day (aka Wednesday). The enchiladas were so good, they would actually chart increased school attendance on enchilada day. When the lunch bell rang, there would be a mad dash to the cafeteria because the line would be out the [expletive] door and you ran the risk of them either running out or your [sic] not having enough time to eat. One kid broke his arm running toward the cafeteria on enchilada day when he put his hand through the plate glass window on the door trying to push it open. I’m pretty sure he still tried to get in line before going to the nurse.

Whoa! Could this be true? The best cheese enchiladas on the planet were served at San Antonio school lunches?

I called around and crowdsourced on social media, asking people who attended San Antonio public schools what “Enchilada Day” meant to them. It became quite clear that these enchiladas make quite an impression. The phenomenon started in the 1950s and continues today, particularly in the city’s North East Independent School District, where enchiladas remain in the menu rotation.

“The races to the cafeteria were amazing,” says Dr. Richard Middleton, a graduate and former superintendent of San Antonio’s North East ISD. “At our 50th high school reunion, people were talking about how if there was one thing they wish they could relive, a lot of them said Enchilada Day.”

“Every Wednesday,” Pat Wente, a graduate of Highlands High School in the San Antonio Independent School District, said via email. “Two ethereal cheese enchiladas, rice and beans (not refried), and chocolate cake. Thirty-five cents. People came in off the street to eat on Wednesdays.” Middleton used to bring an extra nickel just to get a third enchilada, they were that good.

“I would take them over anyone else’s,” says Rose Stevens, a graduate from and then a teacher in San Antonio’s North East ISD. “They are so tender and creamy and so perfect. I am San Antonio born and raised, and while I am as Anglo as they come, I know my Mexican food.”

Though retired, Stevens still volunteers and takes substitute shifts for pay. One shift recently came to an end when she needed an operation that required a substitute teacher to take over for her. “[W]hen he called me, he said he was sad I was returning to school on a Wednesday, which meant he would miss Enchilada Day … that was all he wanted to talk about. And here I was wanting to talk about my class,” she says, laughing.

According to Sharon Glosson, executive director of school nutrition for North East ISD, when San Antonio schools started restricting access due to COVID-19, parents “wanted to know if they could still come visit on enchilada day.”

As for Jose Ricardo Valdez, a former North East ISD student, he believes they exist on a whole other level. “Best enchiladas ever!” he proclaims. “They are uniquely delicious and don’t really compare to restaurant enchiladas. Maybe it’s the cheese?” He, like a number of students from North East ISD, also remembers cornbread as a key component of the meal. “The cornbread was great to soak up all the gravy,” he says. “It was a hearty lunch and probably nap time afterwards.”

In saying it was all about the cheese, Valdez may be on to something.

Middleton recalls enchiladas were already entrenched on San Antonio school lunch menus in 1960, when he started attending those schools. According to him, a woman named LaVerle Billingsley, the longtime manager of North East ISD’s school kitchens, added them to the district’s menu in the 1950s, probably to take advantage of cheap, subsidized American cheese (read, “government cheese”). Thanks to its meltiness, it just so happens to be the perfect cheese for enchiladas. And so, recognizing the love San Antonians had already for cheese enchiladas, Billingsley made it a Wednesday staple, trusting the cooks in the district’s kitchens to come up with the recipe for the sauce and the chili gravy on top. Which they did.

Here’s the recipe, so you can make them at home, thanks to a demonstration posted by San Antonio news station KSAT in September 2019:

I attempted to make them myself. I (mostly) followed the instructions and had myself a tray of magnificent enchiladas that took me three whole days to eat. (Note: When they say 12 ounces of hamburger, don’t just throw in a whole pound. I did, and it made my chili gravy way too thick.)

When KSAT posted the recipe, it ignited a cheese enchilada fever in the unlikeliest of places. A few weeks after it went online, it was shared to a social media group for institutional cooks all over the world. This message came in from a school cafeteria in Stockholm, Sweden:

Today we served enchilada, inspired by the amazing [recipe] from North East ISD. It’s great that a dish can travel all the way from San Antonio, USA to Restaurant Mättpunkten in Flemingsberg, Stockholm, Sweden…. and by the way… the kids in our school loved it. Not a single portion left.”

Stevens, the former teacher who still does spot duty in San Antonio schools, told me that enchilada day is still occurring. It is now in a rotation of Tex-Mex dishes served on Wednesdays that also includes Frito pie, tacos, and nachos. But the cornbread is long gone. “Nutritionists decided that was too many carbs, alongside the tortillas and beans,” she says.

While elementary school kids prefer Frito pie, Stevens says, older students tend to ask for the enchiladas more, getting wiser as they age.

I told her of my experiment attempting to make the enchiladas at home, and she just laughed. “I am glad you enjoyed yours, but you can’t replicate what those ladies do in the kitchen,” she says.

But I can most certainly keep trying.