From One Hometown Hero to Another: the Legacy of Fredericksburg’s National Museum of the Pacific War

Once the home of a fleet admiral, the museum is under the care of a retired four-star general 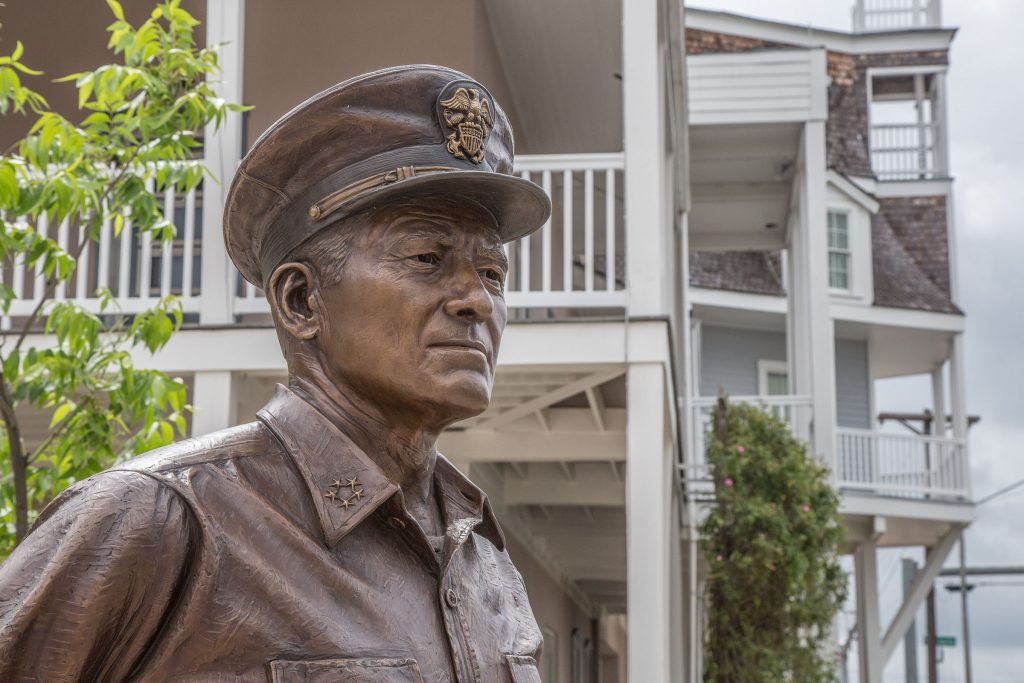 The bronze sculpture of Adm. Chester W. Nimitz located at the National Museum of the Pacific War on Main Street. Photo by Will van Overbeek.

On a warm afternoon in early May, Gen. Michael Hagee, CEO of the Admiral Nimitz Foundation, sits in his office in a historic house across the street from the National Museum of the Pacific War on Austin Street. Born in Virginia, Hagee grew up in Fredericksburg learning about Fleet Admiral Chester W. Nimitz, the hometown hero who commanded the Pacific War Fleet during World War II and signed the Japanese Instrument of Surrender on behalf of the United States on the USS Missouri in Tokyo Bay.

“I was very proud of being from a town where Nimitz was from,” says Hagee, who has a pretty impressive military background in his own right. After graduating from the U.S. Naval Academy in 1968, he rose the ranks to become a four-star general and serve as the 33rd Commandant of the U.S. Marine Corps. Since 2008, the retired general has run the Admiral Nimitz Foundation, where he dedicates his time to supporting the museum and preserving its history.

Since opening in 1967, the museum has grown into a six-acre complex that stretches in a L-shape from the George H.W. Bush Gallery on Austin Street, which was dedicated to the former president in 1991 and expanded to 32,500 square feet in 2009, to the landmark Historic Nimitz Hotel, built in the 1850s and located around the block on Main Street.

That’s one thing that Hagee says is unbeknownst to many, that the National Museum of the Pacific War was originally home to another important institution in the city.

“It was actually a hotel when I was a boy here,” he says. Adm. Nimitz’s grandfather, Charles H. Nimitz, who was one of the original 200 settlers that came to Fredericksburg on May 8, 1846, once owned and operated the Nimitz Hotel. The future admiral grew up in the hotel with his widowed mother and grandfather. 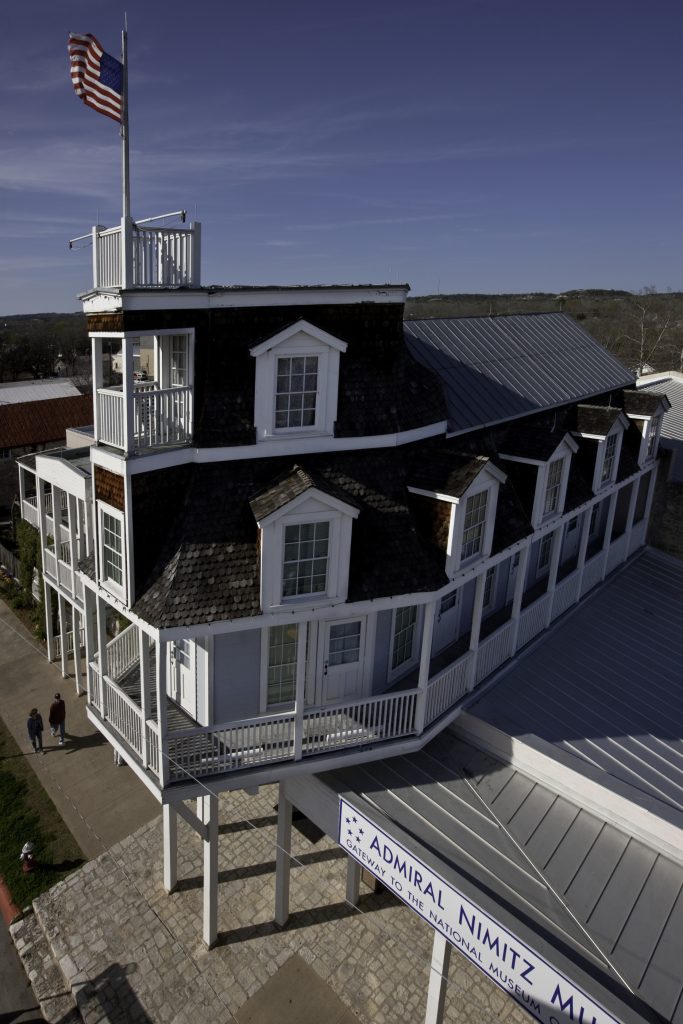 Walking through this part of the museum’s campus, Hagee points out the hotel’s historic staterooms, which are offices today. Small with thick rock walls, it’s hard to imagine travelers once staying overnight in these rooms. On the tour, we pass also an original cedar-plank barn and an old bathhouse.

“If you look at the front of what we call today the Nimitz Gallery [on Main Street], there’s a single story building with two doors—that was the original hotel,” Hagee says.

After purchasing the property in 1855, Nimitz’s grandfather added a two-story building just west of the original site. Between the two buildings was a passage called Equestrian Way where guests could bring their horses and stable them overnight. By the mid-1870s, a third addition, styled like a steamboat, was added between the two structures. Over the years, the hotel changed hands and the facade changed with them, but in 1983, it was restored to Nimitz’s three-part design and remains that way today.

Visitors to this part of the National Museum of the Pacific War walk through the same entrance that hotel guests did years ago. The last member of the Nimitz family to be involved in the museum was Admiral Nimitz’s daughter, who lived in Massachusetts and passed away several years ago at the age of 100. So as CEO of the foundation, Hagee celebrates these layers of history and remains passionate about preserving them for future generations.

As we stroll through the lobby, Hagee enters the historic theater-turned-ballroom, which was once one of the biggest gathering places in Fredericksburg. “Nimitz’s grandfather was a great entrepreneur and he turned the area behind the lobby into a theater,” he says. “In the 1880s, 1890s, and into the early 1900s, it was the center of community activity here.” In addition to hosting events and groups from around the world, the hotel welcomed notable guests, including Confederate general Robert E. Lee. 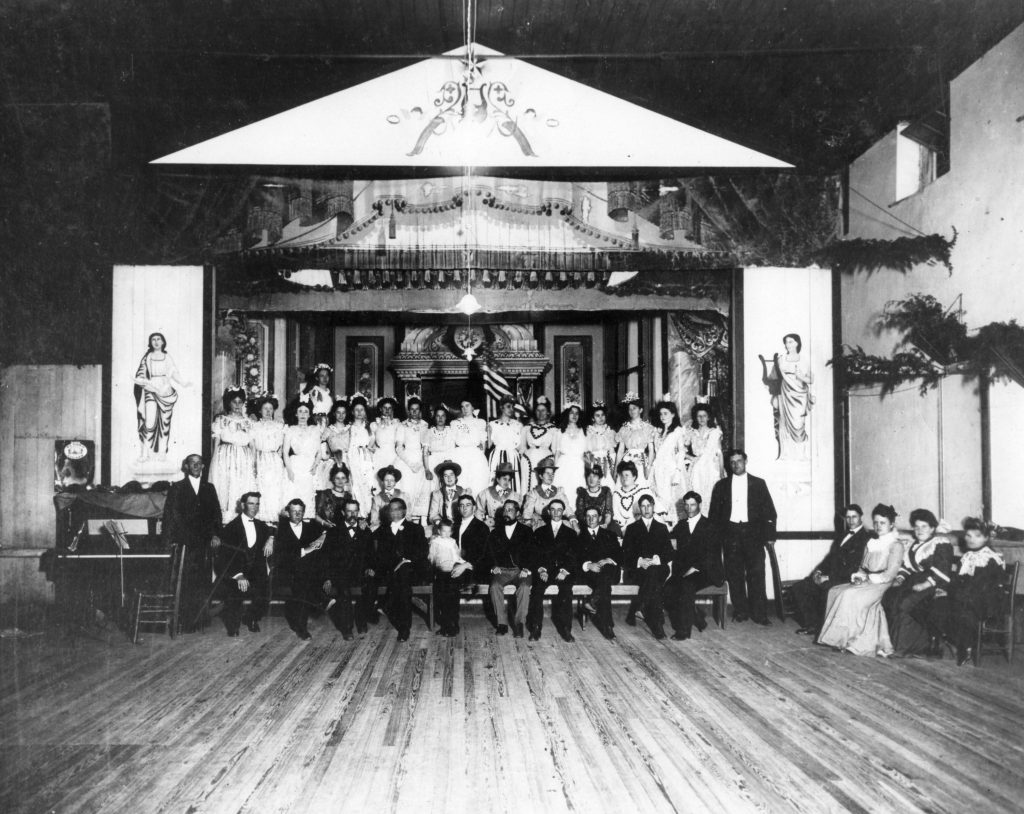 The theater-turned-ballroom at the Hotel Nimitz around the turn of the 20th century. Photo courtesy of the Admiral Nimitz Foundation.

Restoring the ballroom has been one of the foundation’s projects since September of last year. “It’s been a priority of mine to bring some of this history back,” Hagee says.

Local artist Keely Corona Smith is recreating the 1920s stenciling along the walls, while across the room, a large circular stained glass artwork by former activity duty Marine and glass artist Dennis Roberts will shine overhead. The commissioned piece is set to portray a symbolic porthole-view from the USS Missouri, where the war ended, to the USS Arizona where it started.

On the ballroom floor, planks of long leaf pine will be laid around a central water well, which was unearthed during the renovation. The well, a relic from the old Nimitz Hotel, will be illuminated from within and topped with glass before the space reopens to the public this summer.

As Fredericksburg celebrates its 175th anniversary this year, Gen. Hagee’s stewardship, leadership, and commitment to upholding his hometown’s history is something in itself to be celebrated. “That hotel has been an important part of Fredericksburg almost since the founding,” he says. “We want it to be part of the community again.”