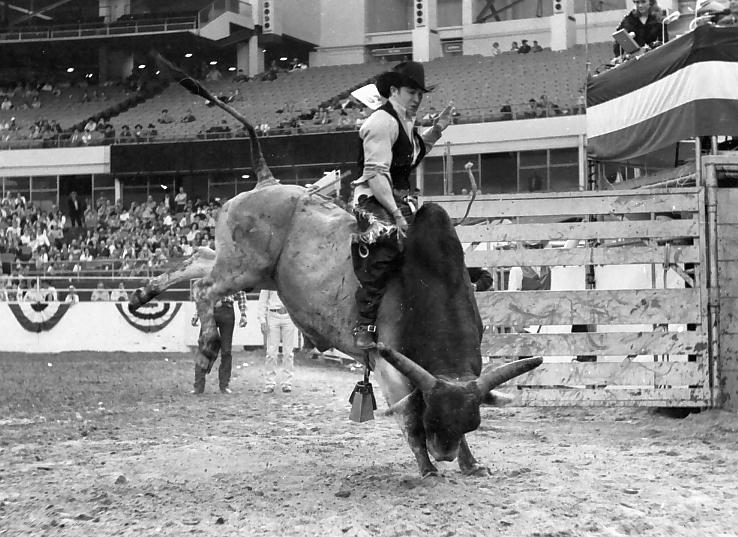 This weekend, the Professional Bull Riders’ premier series makes a stop in Del Rio for the first time. The Unleash the Beast: American Roots Edition event offers fans of the bone-jarring sport an opportunity to witness the PBR’s top 30 bull riders as they compete for points that go toward the title of “World Champion” and a $1 million end-of-the-year bonus.

But, as Del Rioans will tell you, this is not the Southwest Texas border town’s first rodeo. No, pro bull riding has been a staple in the community ever since George Paul fixed his star in the rodeo firmament during his short professional career.

Born in Del Rio in 1947, Paul grew up in a ranching family with two brothers and a sister. His grandfather owned ranches spanning 1 million acres in Mexico and raised thousands of cattle, sheep, and horses. Paul spent much of his youth on the ranches and dreamed of becoming a champion bull rider.

By the time he was 14, Paul had joined the American Junior Rodeo Association, and within a few years, he was competing on the pro rodeo circuit and qualifying for the 1967 National Finals Rodeo in bull riding. A year later, Paul had successfully ridden 79 bulls in a row, a record that has never been equaled or even approached, according to rodeo writer John Ludlum. Paul also won the bull-riding world championship in 1968.

But Paul’s promise was tragically cut short. In 1970, he was killed when the twin-engine Beechcraft airplane he was piloting crashed in Wyoming on the way to a rodeo. He was just 23 years old.

Danny Whiteley rodeoed with Paul and traveled with the young talent to events across the country. He remembers his friend as an ultimate competitor and athlete.

“I’d seen him make numerous, just unbelievable bull rides,” says Whiteley, who now serves as the police chief in Poplar Bluff, Missouri. “In George’s mind, there wasn’t a bull that could throw him off.”

In 1976, members of the Paul family organized a rodeo event in Del Rio to honor the superstar bull rider. Over the years that event has become the George Paul Memorial Xtreme Bull Riding, the oldest, continuous standalone bull riding event in the United States, according to Bobby Paul, George’s older brother and the event producer. Traditionally taking place in April, this year’s event was moved to May 21-22.

Over the years, the George Paul Memorial has drawn many luminaries of the sport including Pro Rodeo Hall of Famers Lane Frost, Charles Sampson, Tuff Hedeman, and Jim Sharp. The 1993 movie about Frost, 8 Seconds, which starred the late Luke Perry, was partly filmed in Del Rio and featured a reenactment of the 1983 George Paul Memorial.

During its heyday in the 1980s, the George Paul Memorial attracted people from all over the country, and the little border town and its sister city in Mexico, Ciudad Acuña, became the destination for a weekend of booze, betting, and bull riding, says former Del Rio News-Herald sports editor Brian Argabright, who covered nearly every George Paul Memorial since 1997.

“These days, the event itself has become more family-friendly, though it still draws thousands,” he says.

Paul was inducted into the Pro Rodeo Hall of Fame in 1979, and he is still holds an esteemed place in the bull riding community.

“There’s a lot of riders that have come here, and they say, ‘We’re here. This is where George Paul was from. This is where that guy that never got thrown off anything is from,’” Bobby Paul says. “It’s like a pilgrimage, and I think that is what draws a lot of them here. There are very few people in any kind of sport in the world that can say they’ve held a record for over 50 years.”