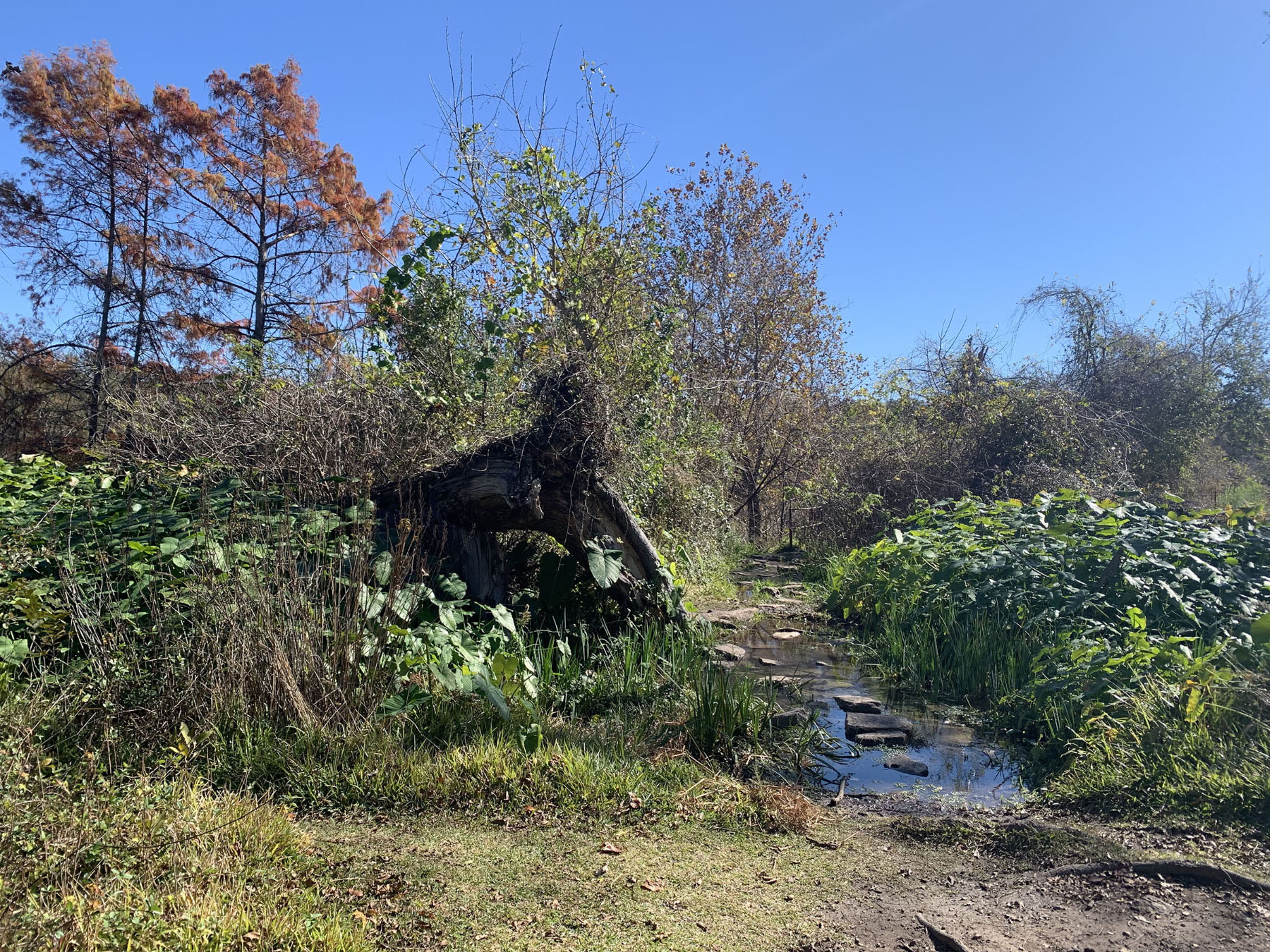 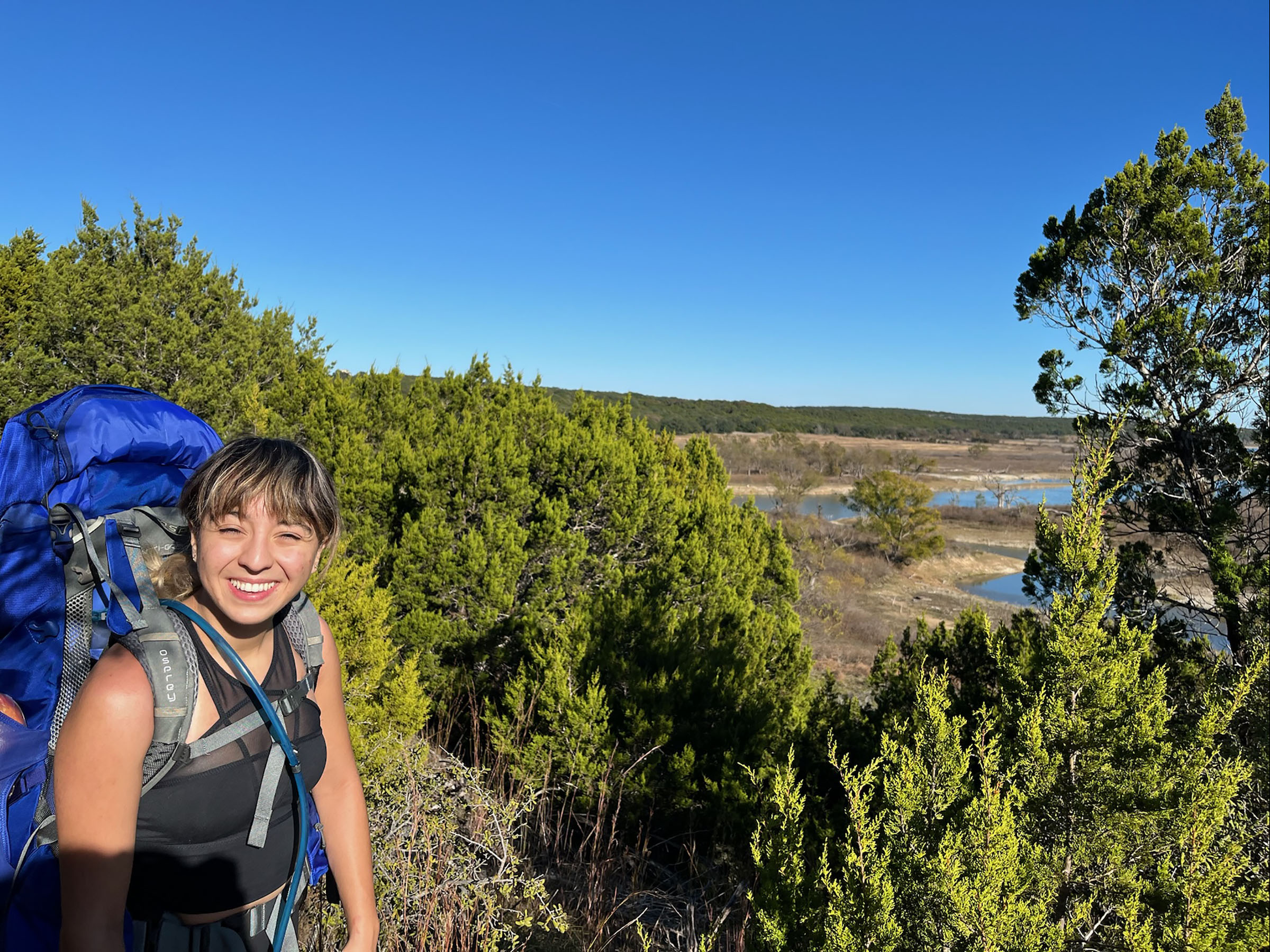 Story and Photos by Morgan O'Hanlon

As the sun sank deeper beneath the shores of Lake Georgetown, I realized the glow over the Hill Country scrub wasn’t the last holdout of daylight, but lights from Austin—a stone’s throw away. Seven miles into a nearly 27-mile loop that surrounds the reservoir on the San Gabriel River, a friend and I set up camp that late-November evening on the banks of a small inlet. Earlier that day, we hiked beneath the orange, red, and yellow leaves of oak, elm, and cypress trees. The blanket of color above the deep blue of the lake was something I would’ve expected in the Ozarks or Appalachia and not a Hill Country suburb. Yet, as we got up the next morning, we heard dogs barking and lawnmowers humming from the yards nearby.

The trail, known as the Goodwater Loop, is one of Texas’ few thru-hikes, meaning hikers can traverse a continuous stretch for multiple days. Before setting out, I spoke to Lee Compton, president of Austin’s largest and most active mountain biking club, the Austin Ridge Riders, which is responsible for about 95% of trail maintenance outside the boundaries of five parks along the lake’s shore.

“It’s just a hidden gem,” he said. “Even though the subdivisions are getting closer, when you’re out on the trail you could actually think you’re out in the middle of nowhere—unless of course you happen to hear a siren go by or an airplane fly over.” 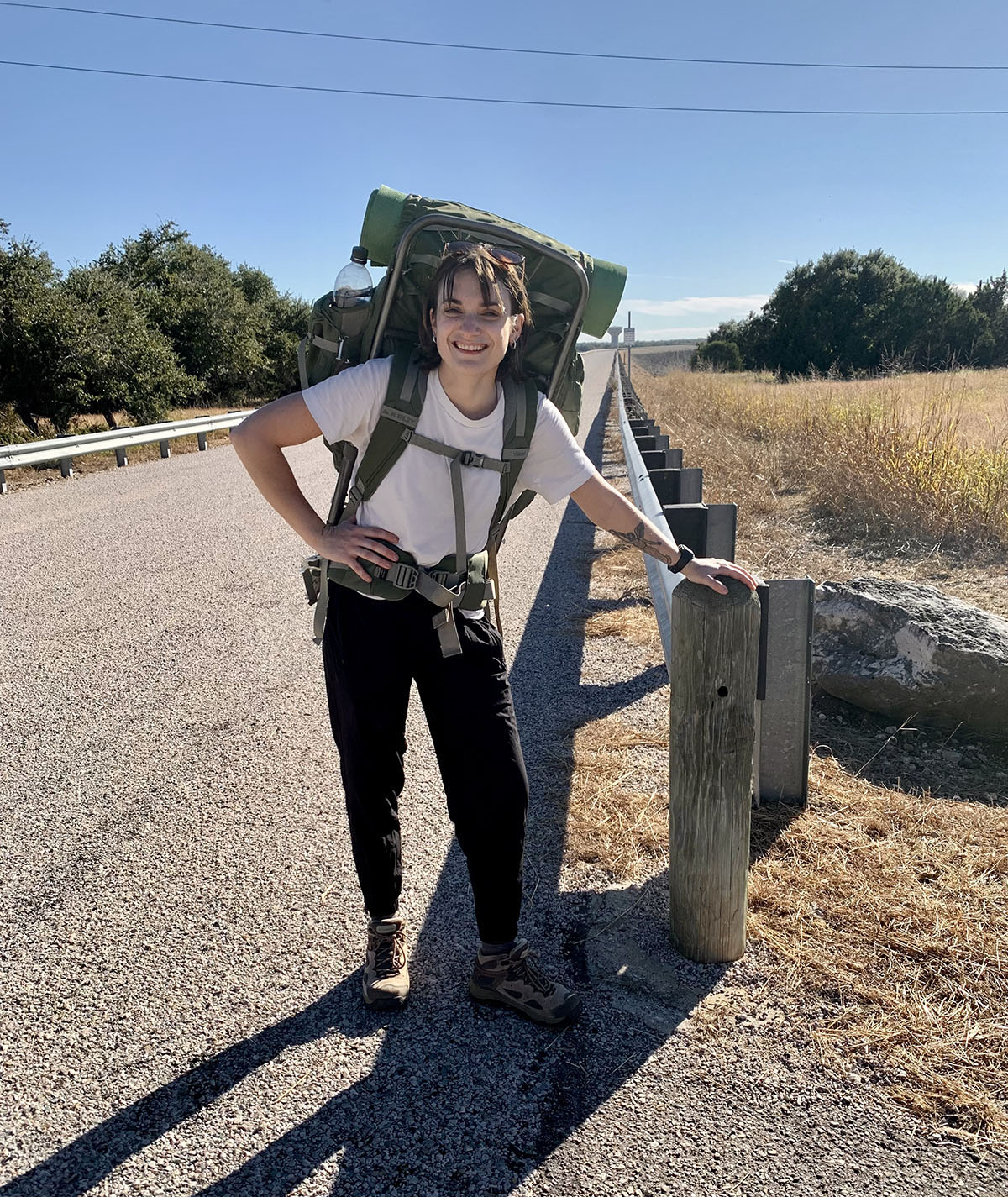 The lake sits only 7 miles from Georgetown’s historic downtown square and mostly attracts visitors from that city and its outlying neighborhoods. Some area hikers complete the loop in a single day, taking 12 hours to navigate diverse terrain ranging from steep, rocky hills on the lake’s south shore to flat grasslands on the north side. But my friend and I spent the better part of three days and two nights exploring the trail.

Although anglers and other recreationalists have enjoyed the adjoining parks since they opened in 1981, most of the 26.9-mile loop around the lake is a recent development. Compton, who moved to Georgetown in 1992, said hiking was limited and mountain biking was virtually non-existent when he arrived in town. In 2003, the Ridge Riders, interested in making more of the trail accessible to mountain bikers, worked with the Corps to build a trail between Overlook Park and Russell Park on the north shore, a project that ultimately took about two years. The first year most folks could complete a full loop wasn’t until 2010, after the group had completed another project to make the south side of the lake more accessible to hikers and bikers alike.

We began our trip at Tejas Park, a small campground at the western tip of the loop that’s one of five parks along the lake with trail access. Before embarking, we did what U.S. Army Corps of Engineers Park Ranger Jewel Kruse advised and checked weather reports and lake levels.

Some points of the trail will flood if the lake is at or above capacity. We also called in advance to check with Corps rangers about leaving our car. Some parking lots have associated fees, and we didn’t want to finish 27 miles of hiking only to find ourselves headed to the nearest tow lot.

Equipped with large, overpacked backpacks containing about 30 pounds of sleeping gear, food, cookware, flashlights, warm clothes and a hammock, we adjusted to the weight of our packs over the first few miles of hiking. On our first day, knowing that we’d be camping at a backcountry campsite, we also carried in about 2 gallons of water. Next time, we’ll likely use a purifier to clean water from the lake; potable water is also available in all the Corps-maintained parks along the route. In future trips, we’ll leave every spare ounce at home.

We walked about 7 miles on a thin, dirt trail on our first day, spotting red cardinals and listening to critters rustle in the surrounding brush. Although we finished the day without an issue, we would begin to feel the impact of our heavy packs after hiking 15 miles on our second day as we went between primitive campsites. Our aching legs would recommend breaking up the second day by booking a campsite ahead of the trip at either Cedar Breaks or Jim Hogg, which are online-reservation only.

After setting up camp on our first night at Cedar Hollow, one of the loop’s three backcountry sites that are free to use and don’t require reservations, we lit a fire in a designated ring using fallen kindling. In our view above the still water of the lake’s western half were the bleached branches of bare oak trees that Compton calls “ghost trees.” He said they’re submerged except when the lake sinks more than 10 feet below capacity.

Before dams were built to tame flooding, those branches shaded the banks of the flood-prone north fork of a wild river. Named the Rio De San Xavier by Spanish explorers, that river was already known to the area’s Anglo settlers as the San Gabriel River by the time Williamson County was established in 1848. Attracted by clear springs that still trickle into the lake, the settlers built homes, mills, schools, churches, cemeteries, and postal stations. Both those ruins and the natural beauties that inspired them are still visible along the Goodwater Loop. 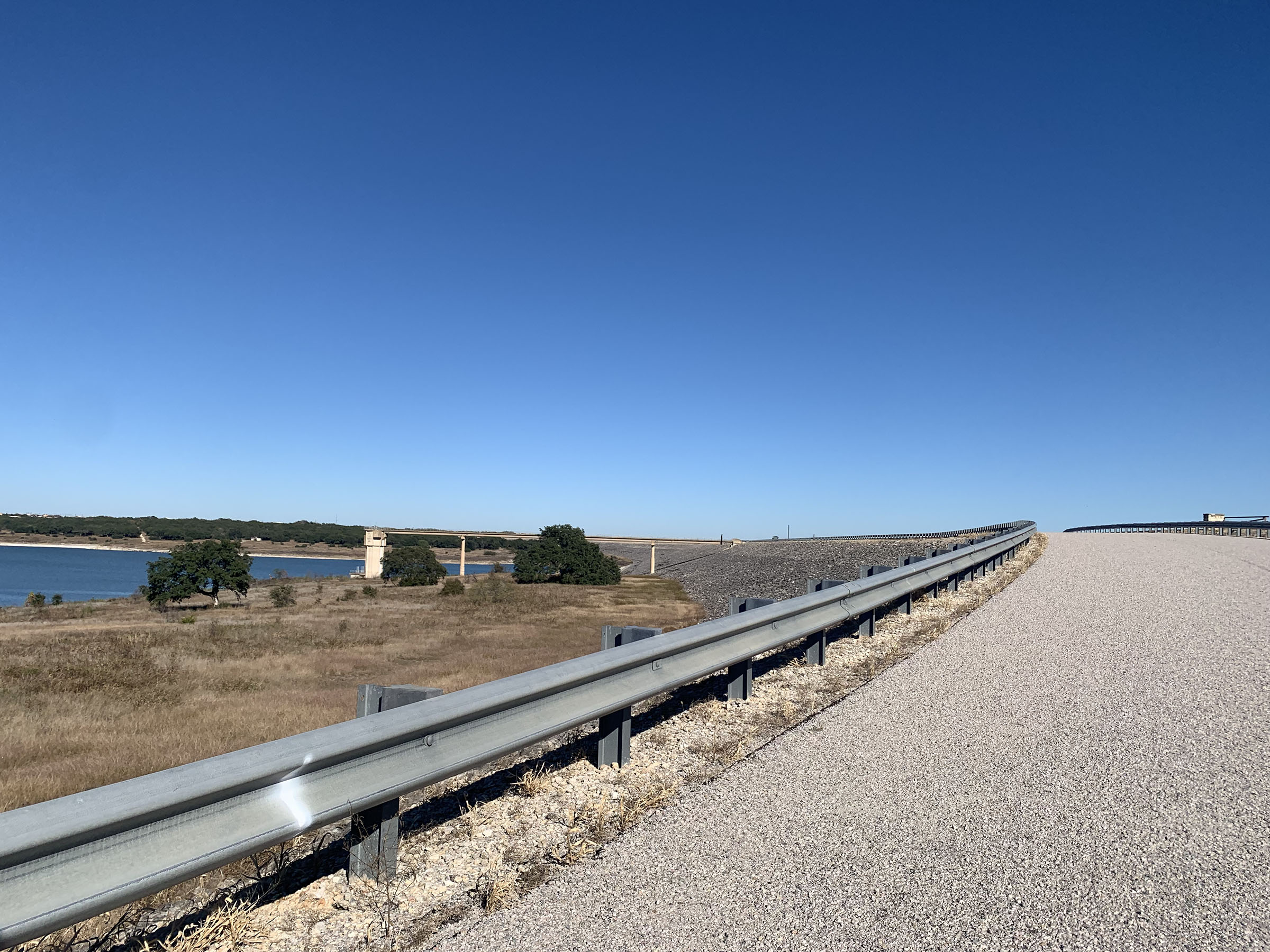 We started our second day with a surprise at Crockett Garden Falls, about 9 miles into our journey. Although we knew to expect a lush waterfall and grotto below the remnants of an old flour mill and farm, we weren’t ready for the moss-covered boulders and elephant ears that made the scene look tropical.

Later that afternoon, we crossed a mile-long dam that marked the easternmost reach of the loop. In 1979, the U.S. Army Corps of Engineers oversaw the damming of the river as part of a flood control measure for the Brazos River System. The Corps still manages Lake Georgetown, owns surrounding property, and maintains the parks along its banks. All in all, it’s an area covering more than 5,000 acres of land and water.

Although tempted to leave our phones behind and enjoy nature in its full capacity, we were thankful we had them toward the end of our second day, when we took several wrong turns on the trail, which is poorly marked in some areas. We stopped to download the Alltrails app, where the Goodwater Loop has already been routed by hikers who’ve completed the whole thing. Among the perks of backpacking in a suburb is that there’s cell service at almost every point of the route. 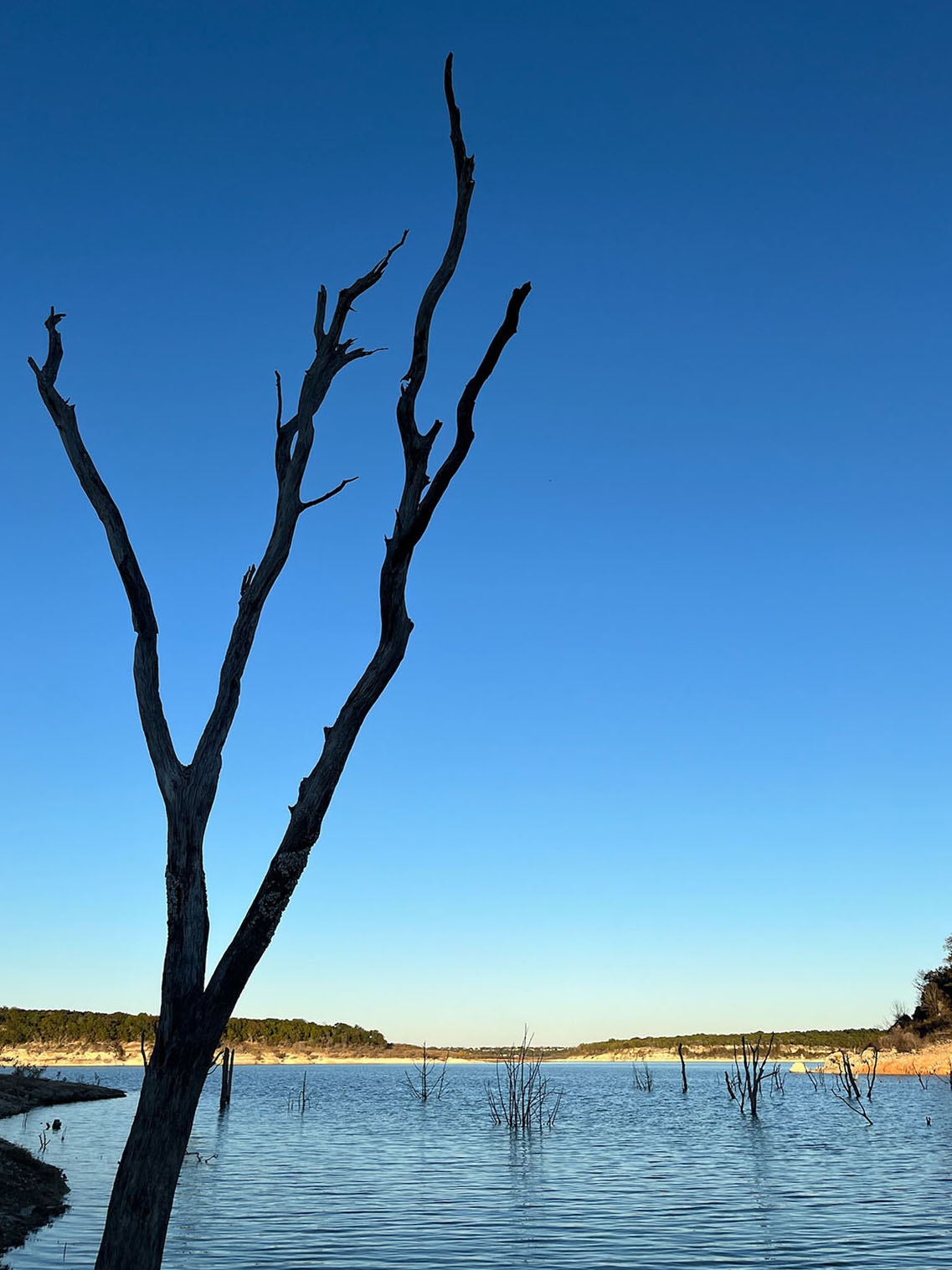 Trees grow from the water of Lake Georgetown

On the morning of our third day on the trail, we set out to complete the last 5 miles of our journey. In the last section, with flat, grassy plains and a two-track trail for hikers and vehicles, signage along these historical miles told stories of prehistoric hunter gatherers. Long before the arrival of Anglo settlers, Native Americans navigated the river, attracted by abundant fish and wildlife. According to Kruse, people lived in the area more than 10,000 years ago. There are still artifacts from that time, like arrowheads, scattered among the limestone and cedar roots, but we were unlucky and didn’t spot any. If we did, Kruse had warned, we couldn’t take them home with us. The trail is located on U.S. Army Corps of Engineers property and doing so would be a federal crime.

As we hiked this easy section, we realized the decision to hike the trail counterclockwise had also been the right move. Our legs thanked us for the flat, smooth trails that crossed the grassy plains on the north side of the loop. It would’ve been difficult to complete the hilly south side (my research came up with an elevation of 800 feet), without the energy we had when beginning our trip.

In the last few hundred feet of our trip, we reached the historic Hunt Crossing, a bridge originally built in the 1800s that has since been reinforced with concrete. Today it takes hikers and cars over the San Gabriel near Tejas Park and is one of the last remaining crossings established by Anglo settlers to cross the river—the rest were inundated by the lake. We crossed it excitedly, knowing that our tired legs would soon get to rest.

The Goodwater Loop offers something for all levels of hikers. For Missouri City resident Vic Hay, an experienced hiker who I met through a statewide hiking group on Facebook, it can be a refuge. As a health worker during the pandemic, she said the Goodwater’s proximity was a savior and it was convenient because she was able to arrive without booking permits.

“The trails are isolated enough for someone like me to experience solitude and nature therapy and God,” she said. “I also used the trails as a shakedown to prepare me for other difficult thru-hikes.”

Although Hay uses the hike as a warmup, my friend and I, a couple of backpacking novices, discovered a healthy respect for the trail’s challenges, particularly on its hilly south shore. The elevation provided a challenge, but the views at the top of several hills were well worth the exertion.

Hikers seeking a more relaxed adventure with time for swimming or fishing could easily spread the trip out over a third night, but we were happy with the duration and intensity of our trip—brevity was the point! When we arrived back at the car, we were tired but happy and looking forward to a hot shower that was only a short drive away.