The small town of Mason boasts fine wine and good food, plus rock-hunting and bat flights 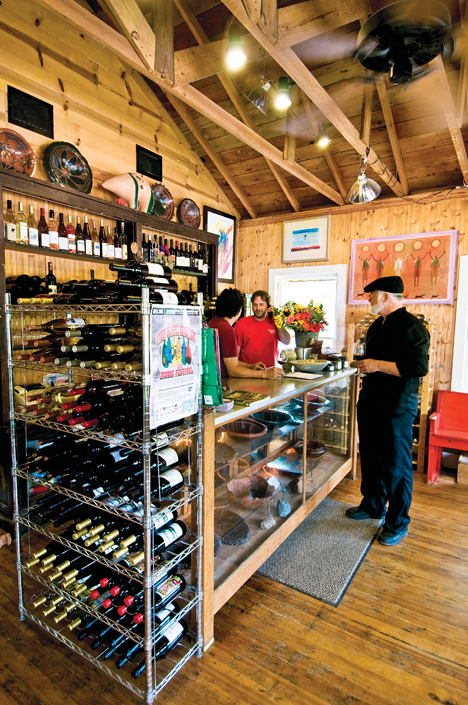 Sandstone Cellars winemaker Don Pullum samples a glass of red as he chats with his business partners Manny Silerio (left) and Scott Haupert. (Photo by Kevin Stillman)Ah, the idyllic getaway: tasting the latest vintage at a boutique winery, lingering in antiques shops and art galleries, settling into a cozy B&B, and experiencing that German sense of comfort and congeniality—Gemütlichkeit—at every turn.

Ah, the idyllic getaway: tasting the latest vintage at a boutique winery, lingering in antiques shops and art galleries, settling into a cozy B&B, and experiencing that German sense of comfort and congeniality—Gemiitlichkeit— at every turn.

Fredericksburg? Could be. But I’m actually 42 miles up the road, in Mason, a smaller, quieter, German-Texan town often overlooked by tourists. Although I’ve driven through this Hill Country gem many times, I’ve neglected to explore Mason’s myriad charms. This time, I opt to stop and smell the rosés (and syrahs and grenaches) at Sandstone Cellars Winery, indulge in savory gorditas at Santos Taqueria, stroll the town’s postcard-perfect courthouse square, search for precious topaz, and catch a bat flight from a wild cave (one that has no trails or electricity).

I even convinced my iPod-obsessed, texting teenage daughter, Erica, to join me. We drove west from Austin through Llano and blinked past the hamlet of Art, an infinitely better name than its earlier “Plehweville.” Rolling into Mason, we drove past the soaring steeple of St. Paul’s Lutheran Church and arrived at the town square, Mason’s own mini-Trafalgar and one of the largest courthouse squares in Texas.

The neon-adorned Odeon Theater, another landmark on the square, has operated continuously since opening in 1928. Walt Disney’s film Old Yeller, based on the novel by Mason’s prolific native son Fred Gipson, premiered at the Odeon in 1957. Nowadays, you can watch first-run films and catch the likes of singer-songwriter Joe Ely and the Mason Country Opry.

From the square, we drove south on Post Hill Street by the public library and the heartwarming Old Yeller statue out front, and past the Mason County Historical Museum, housed in an 1887 schoolhouse. At the hill’s summit stands Fort Mason, built in 1851 to protect settlers on the frontier. The namesake town grew up below the fort, which was abandoned in 1869. All that remains is a reconstructed officers quarters, offering a splendid skyline view of Mason. Settlers salvaged most of the fort’s handsome red sandstone to build Mason’s enduring edifices.

Another must-see is the 1880s Seaquist Home north of the square, a white-columned, three-story mansion of local sandstone, with stained-glass windows and wraparound porches. Although the beautiful building is no longer open for tours, we inched by and admired it en route to the Northside Cafe for lunch. Thomas and Victoria Fikes, refugees of Dallas’ five-star restaurant scene, opened the cafe in 2007, turning a 1915 country store into a cheery “semi-dive” serving “fresh, never frozen” fare and the best burgers in town.

You won’t go hungry in Mason—especially at Santos Taqueria. Mason native Manny Silerio and his partner, Scott Haupert, opened Santos in 1998, transforming an old gas station near the square into a lively Mexican cantina with indoor and outdoor seating. Everything on the menu—taquitos, gorditas, chalupas, salsas, y mas—is fresh made by Santos Silerio, Manny’s mom.

In 2004, Manny and Scott teamed with winemaker Don Pullum to open Mason’s first winery, Sandstone Cellars, in the beige bungalow next to the taqueria. An Ivy League financier, Pullum planted Mason County’s first vineyard 11 years ago. The Hickory Sands soil and moderate climate proved ideal for Mediterranean grapes, such as Touriga, Mourvedre, and Syrah. After his vines flourished, six more vineyards were established in Mason County, creating a singular terroir for what Pullum calls “fusion wines,” a complex melange oflocal fruit

These wines are winning awards and impressing oenophiles. While I swirled and sniffed several vintages—I especially enjoyed Sandstone’s new 2006 vintage portin the tasting room/art gallery, an eclectic mix of locals and tourists ebbed and flowed.

Mason (population 2,134) harbors an inordinate share of creative souls, including the award-winning, woodcarving caricaturist Gene Zesch and the multitalented artist Bill Worrell, who sculpts, paints, and writes at his nearby home on the Llano River. A “Worrelling Dervish” of creativity, he designed Sandstone’s wine labels, and his shamanic, pictograph-inspired bronzes are available in Sandstone’s gallery (as well as in other galleries throughout the Southwest).

That evening, Erica and I had a flight to catch-the emergence of some 1.6 million Mexican free-tailed bats from the Eckert James River Bat Cave Preserve, owned by the Nature Conservancy of Texas. Bat-cave steward Vicki Ritter led us on a rambling half-hour drive to the James River, a tributary of the Llano. We forded the river, parked, and hiked about a quarter-mile to the mouth of the guanorich cave. An hour before sunset, the first bats emerged, streaming from the cave in a chattering, winged vortex that spiraled upward like a tornado. “It looks endless!” exclaimed Erica. Hawks, falcons, and owls joined the bacchanal, swooping for prey amid the undulating river of bats.

After sunset, Erica and I returned to town and collapsed in the quietude of the Mason Square B&B, located on the second floor of a storied building that served as a saloon in the late 1800s and later as a meat market, grocery, and bakery. I arose early Sunday morning to hunt for topaz—the state gem of Texas—at the Seaquist Ranch, one of two granite-studded ranches in the area open for topaz hunting. Mason County is the only place in Texas where you can find the precious clear, smoky, or sky-blue gemstones.

After an hour of digging and sifting in alluvial gravel beds below pink granite out-croppings, several rockhounds found a topaz that morning at the ranch. If that seems like too much work, you can buy topaz in town at Country Collectibles, Underwood Antiques Mall, and Gems of the Hill Country.

“When people pass through Mason, they just love it and want to live here,” confided Michelle Chapman, who owns Mason Square B&B with her husband, Shain. “And when they do move here, everyone wants the gates shut. They want Mason to stay right the way it is.”

So do I. Why cut and polish this lovely topaz-in-the-rough?