This is a godforsaken land. It only grows what it wants, and it wants sculpture.’ 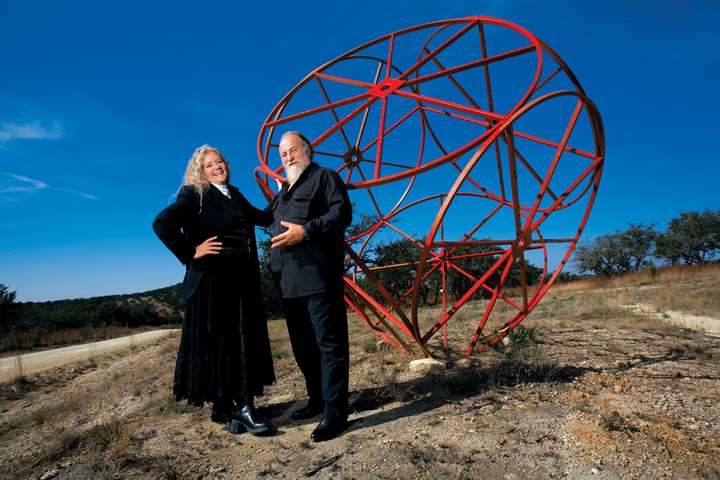 The Texas Hill Country, with its limestone bluffs and undulating landscape of live oaks and cedars, bears some resemblance to the Mediterranean countryside. At least, that’s what Benini, an internationally established artist who goes by his last name, thought when he first laid eyes on the region. This section of Texas evoked Benini’s native town of Imola in northern Italy, though he hadn’t lived there in decades.

Drawn to this familiar landscape, Benini and his wife, Lorraine, moved from Hot Springs, Ark., where they had been active in the arts community, and purchased 147 acres just outside Johnson City in 1999. The remoteness of the site appealed to them. Their new home, perched atop one of the highest spots in Blanco County, offered panoramic views of the rugged terrain, and the property boasted a massive silver Quonset hut that could be fashioned into a studio gallery where Benini, now in his late 60s, could paint undisturbed. “We came here for privacy,” Benini chuckles, acknowledging the irony of transforming his private retreat into a public venue.

Today, the Benini Galleries and Sculpture Ranch draws thousands of visitors every year. This oasis of art, tucked among the tree-covered hills, features two miles of caliche trails that meander among a surprisingly diverse array of sculptural installations. About 140 works by 40 artists now populate the ranch—some pieces sheltered among the scraggly groves of live oaks, some situated atop sun-drenched hill crests, some congregating around a murky green pond, and some planted in the rocky soil alongside the erratic path.. When asked how their home evolved from being a reclusive artist’s lair to a popular tourist destination, Benini gives a resigned shrug and says, “This is a godforsaken land. It only grows what it wants, and it wants sculpture.”

In fact, the Beninis’ entire endeavor started as a happy accident. After the couple installed a few sculptures from their own collection on their property for their personal enjoyment, word spread quickly. By 2004, curious visitors were lining up at the ranch’s gate and hopeful artists were calling to see if their work could be included in the unorthodox venue. Determined not to operate the ranch as a commercial venture, the Beninis decided early on that they would neither charge admission to their property nor charge a commission for works sold on the ranch. Lorraine, who manages the ranch’s affairs, now receives portfolios from artists as close as Austin and as far away as Europe and South America.

The Beninis select sculptures that are large enough to stand up to the majestic Texas landscape, “because nature will dwarf anything,” and that appeal to them personally. “After all, it’s our own backyard,” explains Benini. They encourage artists to choose the site on which to install their work, even if that means blazing a new trail and clearing the surrounding land. “I’ve worn out seven chain saws,” Benini remarks somewhat ruefully. But the results of this hard labor are visually stunning, and as visitors tour the grounds, sculptures emerge around every bend in the road, enhancing the landscape, as Benini describes it, “like jewels on a beautiful lady.”

Several of the sculptures appear perfectly suited to the environs, referencing the native flora and fauna. A towering metal agave by the Kyle-based artist known as LaPaso activates in the wind, its blossoms spinning wildly. A more abstract steel piece by Blanco artist Peter Mangan called Rattle Tail resembles the business end of a rattlesnake, but 10 feet tall and studded with colorful glass circles. And Bettye Hamblen Turner’s massive figures of horses and cattle, assembled from bright pieces of chrome and stainless steel, appear as if frozen in a moment of grazing. Her hulking Longhorn sculpture Marathon, marking the turnoff to the ranch, greets prospective visitors and inspires spontaneous U-turns on the part of drivers hoping to get a closer look.

Some works interact with the landscape in unexpected ways. A lifelike cement sculpture by San Angelo artist Scott Sustek of Diana, the Roman goddess of the hunt (titled Diana the Huntress), stands seven feet tall and halfway up a low hill, with Diana pulling back her bowstring as if to take down an unsuspecting javelina. The five larger-than-life Dancers, by Dallas-area artist Jerry Daniel, frolic in a circle in a field of tall grass, their simple steel arabesque forms inspiring visitors to join them. Others, like the bright purple, red, and blue cubistic shapes by Austin artist Robert Hamric, hang from the branches of trees like odd, oversized Christmas ornaments.

The great outdoors provides a unique kind of art-viewing experience. According to Seattle artist Robert McConaughy, whose sculpture Phantom Hill is on display at the ranch, “Most indoor work, unless it’s site-specific, doesn’t have to interact with its surroundings. The work is usually placed in a static environment. The outdoor environment is anything but static. The seasons change, the daylight shifts hourly, daily, and seasonally.” Phantom Hill capitalizes on these changes—its triangular metal structure, measuring 12 feet tall at its peak and stretching approximately 140 feet long, supports hundreds of ropes that hang about a foot above the earth and sway with the passing breezes, casting moving shadows on the ground. “When the wind blows, it’s like a visual symphony,” Benini observes.

A few of the ropes have begun to unravel from motion and friction caused by the gusty winds, but McConaughy doesn’t mind. “I’m very comfortable with the inevitable. One of the reasons I don’t work in bronze is that I don’t want to make something that will last centuries unchanged.” Yet nature acts upon the bronze sculptures of the ranch as well: Birds have nested in some, and have added their own “patina” to their favorites. “They acquire an added dimension,” says Benini, who embraces these changes with a sense of humor. “For me it’s more beautiful.”

Turner, a Texas artist based in Del Rio, laughs about an enterprising bird that has nested in the nether regions of one of her Longhorn sculptures, yet she wouldn’t have it any other way. “Because my work is all animals, when I envision it, I see it in the pasture, and the Beninis had the perfect setting,” she remarks. ”My work looks better not only in a large outdoor space, but also looks better in the company of other works.”

Benini values this artistic interaction as well, finding in it a new source of inspiration. He says that his arrival in the Lone Star State was “the beginning of a playful mood I never had before. Texas has given me the freedom to let go.” This freedom has manifested in the changing style of his color-saturated paintings, hundreds of which are on display in his vast studio gallery, and has induced him to try his hand at a few sculptures of his own. “There are some whimsical things on the ranch, and they usually have my name on them,” he confesses. In one such work, Ubiquitous: Rosso, fused wagon wheels merge into a twelve-foot-tall red cube, set precariously on end. In another, titled Five Bucks, One Blue, a herd of life-size cast-aluminum deer (one painted royal  blue) hovers an inch above the earth, suspended from the twisting branches of a live oak. The faux deer once stood directly on the ground, but real bucks, mistaking them for intruding rivals, repeatedly knocked them over.

The Hill Country environment may not be easy on art, but it is an environment that seems to put people at ease. According to Bettye Hamblen Turner, “I think being out of the city is a little more comfortable for people who don’t go to museums and galleries. You will never meet a sniff of condescension or hint of derision at the Beninis. It’s less intimidating.” Benini verifies this observation, saying of his visitors: “A lot of people have never set foot in a gallery or museum. They are discovering a new world.” The Beninis may have lost their privacy at the Sculpture Ranch, but they have gained a community of enthusiastic artists and a legion of curious visitors whose surprise and pleasure upon encountering art in this unexpected locale make all the effort worthwhile. “That’s our reward,” affirms Lorraine Benini, “to know people enjoy it.”