In Johnson City, It’s Out With Midcentury Furniture, In With Vintage Motorcycles

While Echo Gallery relocates to Blanco, the Texas Vintage Motorcycle Museum moves in for a spring opening 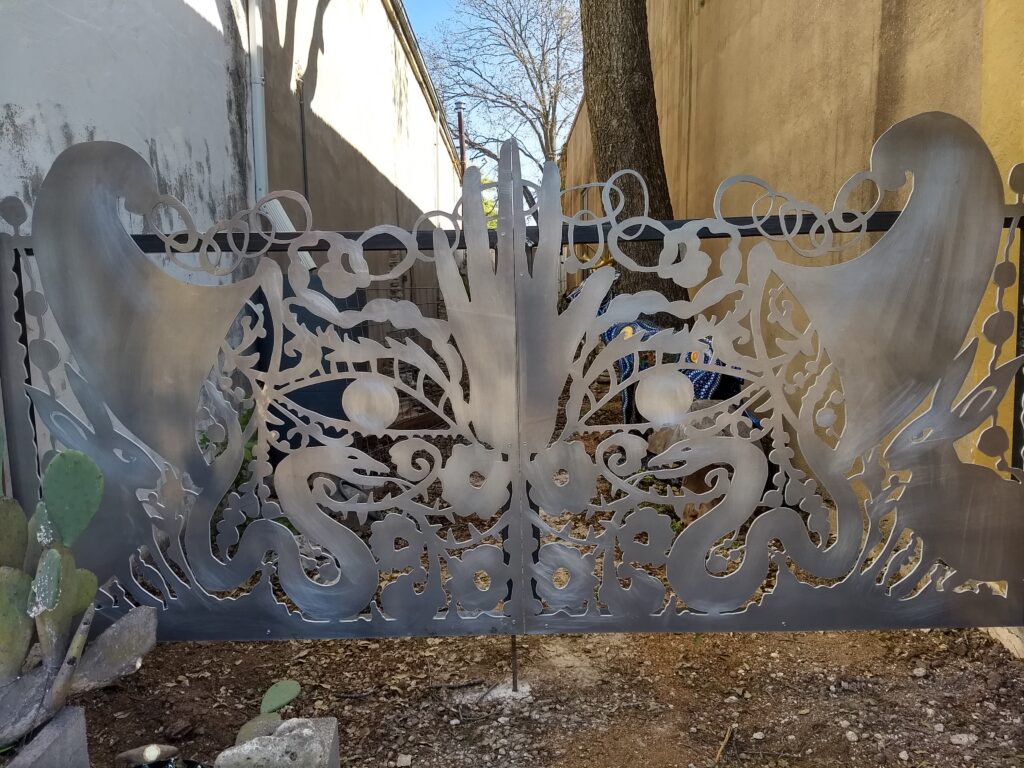 Named “Gaia,” this gate was commissioned by Linda Haddock and John Sone for Echo. Artist Deborah Mersky wove the couple’s handprints into the work. Photo courtesy of Echo in Blanco.

If you’ve driven through Johnson City on US 290 in recent weeks, you may have noticed a change at the corner of Main and Nugent streets. Echo, the whimsical Johnson City art gallery and purveyor of midcentury modern furnishings, is no longer there, having relocated to Blanco.

Since 2016, Echo thrived in the historic Cox Brothers Ford building. But last year, Linda Haddock, co-owner of Echo and former owner of the building, sold the property to Gordon Massie, a motorcycle enthusiast from the Woodlands. Now the 1930s art deco building that originally opened as a Ford dealership specializing in Model A’s is returning to its vehicular roots: The 6,500-square-foot space is the future home of the Texas Vintage Motorcycle Museum, scheduled to open this spring.

In its six years on this corner, Echo Gallery became a fixture in the community and a regular pitstop for travelers along 290. But Haddock, who co-runs the establishment with her business partner and husband, John Sone, sees the relocation to Blanco as an opportunity to spotlight Blanco’s art world.

“One of our goals is to help drive Blanco’s emerging art scene,” Haddock says. “It’s such a beautiful town. People don’t know this, but it is home to some amazing but under-the-radar artists and musicians. Blanco is on the edge of having a very strong arts community.”

Haddock says that although she now considers herself in semi-retirement, Echo remains her art form. “I’m the curator, and this is my large-scale fluid art installation with art and furnishings always coming in and out. I have strange, quirky tastes, and have always loved midcentury modern design.”

Haddock also has an eye for local talent. The reopening party scheduled for Feb. 24 will showcase the bright, intuitive work of Texas painter Wilma Schindeler.

The midcentury style ranch house and adjacent tin barn that will be Echo’s new home provides a fresh canvas for Haddock and Some. They will host Nuit Blanche, or White Night, a stay-open-late gallery night on third Thursdays. They will also now have space to highlight an enlarged photo that Haddock took in the 1970s of the artist Alexander Calder as he painted the exterior of a DC-8 jet for Braniff, the high style airline where Haddock worked as a flight attendant before it closed in 1982. The mannequins posing around Echo decked out in funky ’70s garb are wearing Haddock’s Emilio Pucci-designed Braniff uniforms.

Echo Blanco will see the return of the scavenger hunt, a kid-friendly diversion that Haddock created to keep youngsters busy while parents browse Echo’s eclectic merchandise. “We welcome kids,” says Haddock, who worked as a children’s behavior specialist after her time at Braniff. “I get down and look them in the eye and let them know my two rules. You can touch everything with your eyes, and then you have to tell us your favorite thing before you leave.”

Meanwhile, back in Johnson City, Gordon Massie is preparing the Ford building to show off a different form of eye candy: motorcycles from the ’50s, ’60s, and ’70s. Massie, who’s retired from a career in finance, has been a collector since he owned his first motorcycle at the age of 12. He plans to put 67 of his bikes on display at the museum. As a gesture to the building’s history, he is installing antique gas pumps in front of the museum and will highlight the hydraulic lift once used for the Model A’s sold there.

Massie also plans on opening up pedestrian space around the museum to make it an easy draw for visitors walking from Johnson City’s breweries and restaurants. With the Hill Country being biker country, the project will include a bike-centric shop and an event space decked out with billiards, lawn games, and a big screen TV for showing motorcycle clips, and maybe even a screening of Easy Rider.

“It’s a novel space and an interesting building, and it’s close to the town’s park,” says Massie, who will charge a $5 admission fee to the museum. “Johnson City is unique in the Hill Country in that it has not had the rapid growth of some other towns. It’s a throwback to 50 years ago, and I want to try to preserve that.”