In the Texas Panhandle, a Farmer Turned Woodcarver Chisels Out a Name for Himself

From golf courses to the Houston Zoo, Cam Dockery has used chainsaws to carve more than 10,000 sculptures 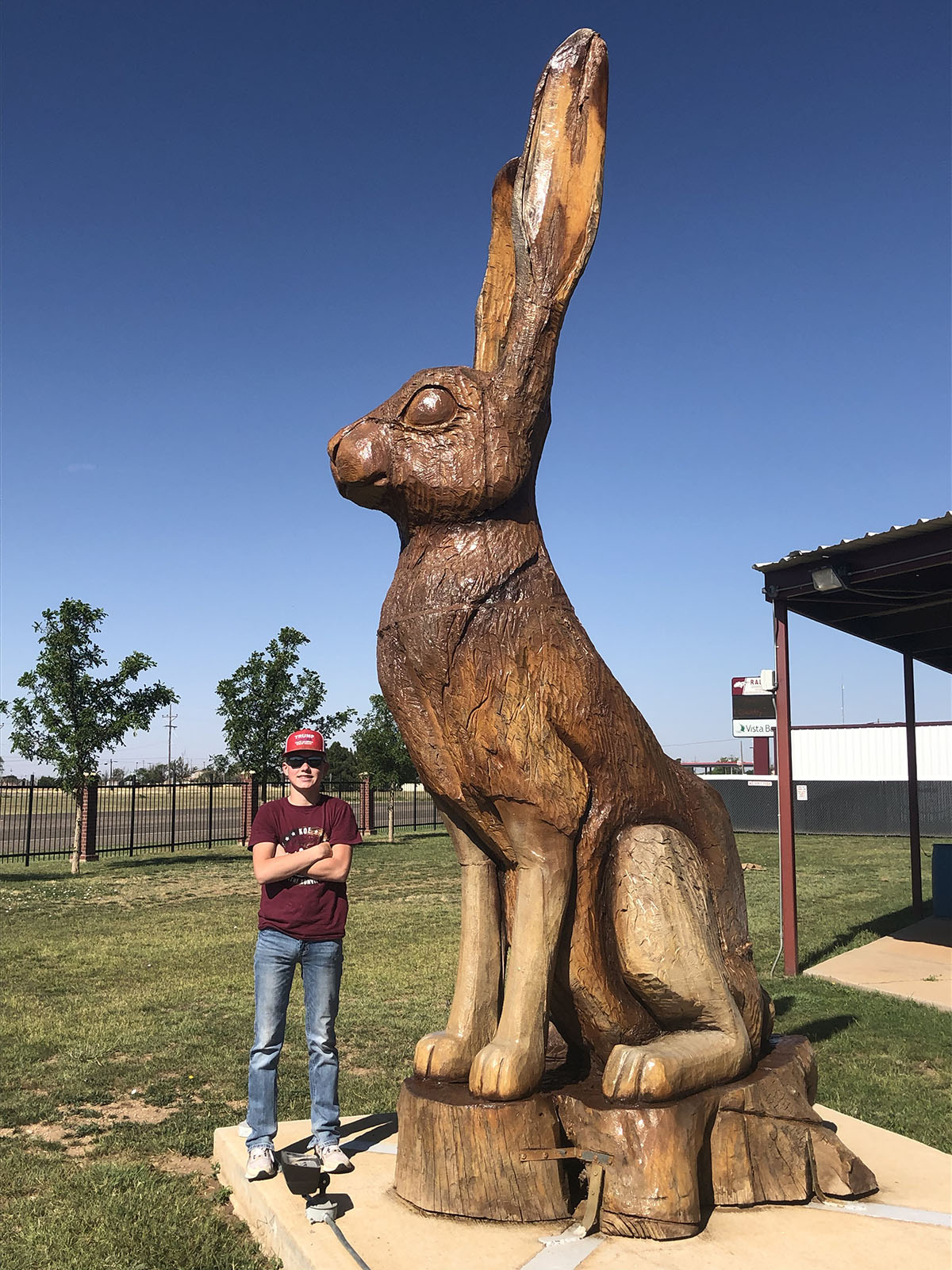 In 2017, Cam Dockery carved the mascot of the Fighting Jackrabbits in Ralls. Photo courtesy Cam Dockery.

In the front yard of a house in Tyler’s Brick Street Historic District stands what was once a dead tree. Over a couple days this fall, it was transformed into a majestic 10-foot carving featuring a birdhouse on top as well as roses and azaleas, a fox and a woodpecker, and the house number of the residence.

The sculpture is the first original piece of art created in the Rose Capital of America by Cam Dockery, a woodcarver who lives in Whitharral, about 40 miles northwest of Lubbock. Since woodcarving became his passion more than 20 years ago, Dockery has sculpted pieces—ranging from furniture to wildlife to people—that can be found throughout Texas and other parts of the country.

Growing up in Whitharral, Dockery, 45, does not remember whittling sticks as a child. “But I collected knives, so I probably did,” he says.

A former farmer with his dad and granddad, Dockery had a life-changing experience when he needed to cut down dead elm trees at his home. When the task was finished, he kept the chainsaw going and carved the head of a bear. “It wasn’t a good one,” he admits. But after adding a body, recreating different versions, and cutting his teeth on the 4-foot bear, he decided to keep it. “I still have it,” he says. 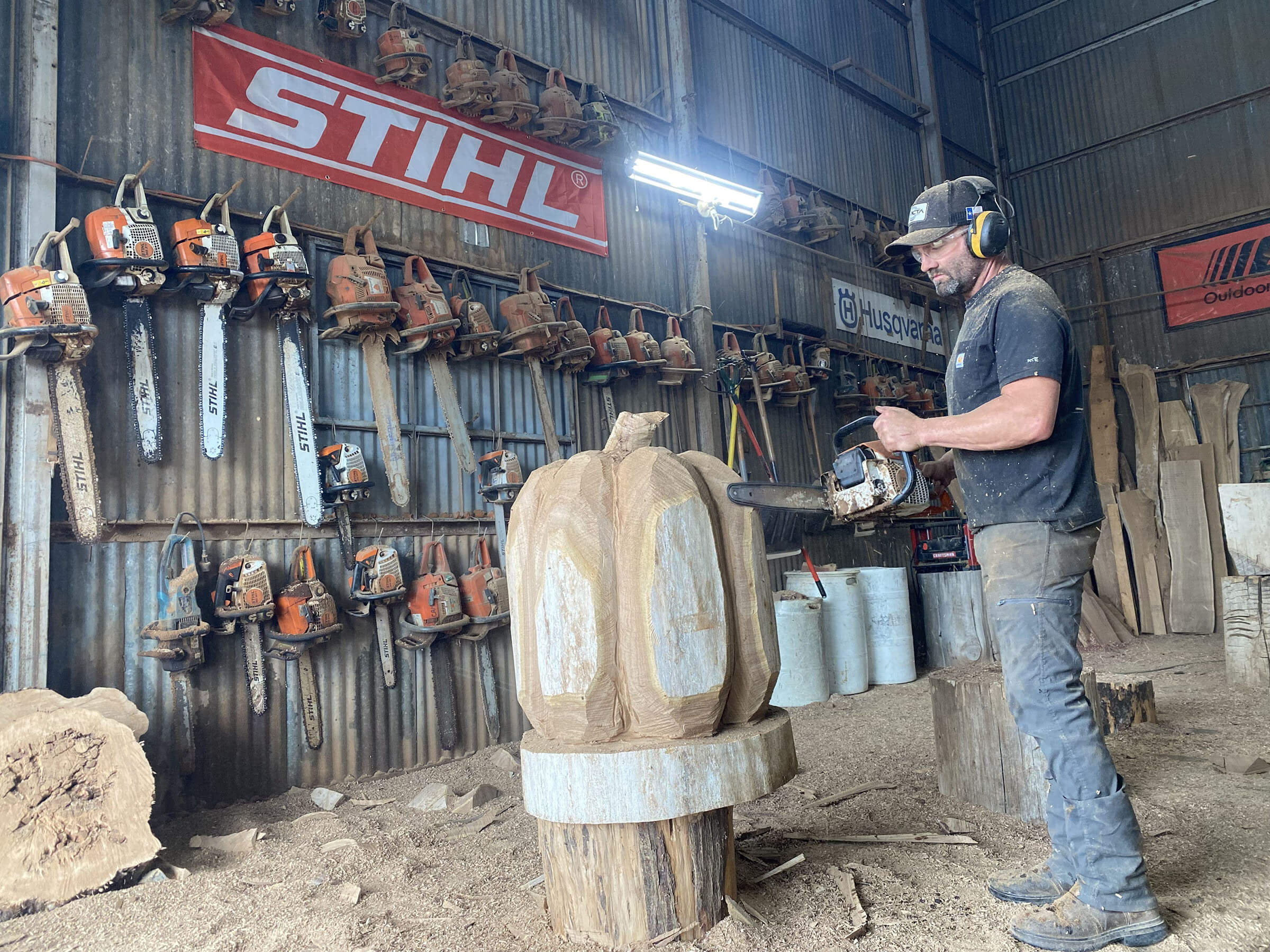 Woodcarver Cam Dockery designs and carves his pieces in an old cotton gin by his house in Whitharral. Photo courtesy Cam Dockery.

The bear is the only carving he keeps. Everything else gets sold through his business, Bearly Making It Chainsaw Carving, which is set in an old cotton gin he bought 150 yards from his home. His friends and family were his first customers, but when others wanted his works of art, he knew woodcarving was his calling. Since opening his business in 2000, he has sawed more than 10,000 creations around the country.

Although he is a self-made carver, it didn’t take Dockery long to head to Ruidoso, New Mexico, to chat with experienced woodcarvers about the types of chainsaws they use.

“I learned early on that using the wrong chainsaw could eat into my profit,” he says. He now has 150 chainsaws, more than Whitharral’s population of 118.

He also participated in chainsaw competitions from 2004 until 2014, earning numerous awards, including placement of two of his carvings in the Balloon Museum in Albuquerque. Most of the competitions were in mountain areas where carvers often live, and while he liked meeting others in the profession, he says contests are not his focus. A family man with a wife and two teenage sons, Dockery prefers to stay close to home for the most part.

“We live in the perfect spot,” he says, “except we have no trees.”

That’s not completely true for the area, which has plenty of elm, but the carver likes variety.

“We use different woods for specific things,” he says. “I’m picky about logs.”

Dockery does hit the road for large on-site installations, such as the Navy Seal Lone Star Memorial in Sugar Land, as well as carvings at the Houston Zoo (you can find them in the chimpanzee and bear exhibits), the Cook-Walden Memorial Cemetery in Austin, and several golf courses around the state. Closer to Whitharral, he carved a 14-and-a-half-foot jackrabbit for Ralls, home of the Fighting Jackrabbits.

Fortunately, modern technology has made Dockery’s life easier. “In the 22 years I have been doing this, things have changed a lot,” he says. For instance, his website, texassaw.com, has been his best asset. People can easily find him now in his remote corner of Texas. He also shares photos and videos on Facebook.

Dockery has carved everything from Paul Bunyan and John Wayne to a 3,500-pound jumping tarpon, as well as smaller carvings for wholesale. But his favorite works are the ones with a personal touch. “I love it when people call me and are passionate about what they want,” he says, adding that he takes time to discuss each detail the customer has in mind. His commission prices range depending upon size and complexity. A three-foot carving is generally $300, plus $50 shipping; a six-foot-carving can be $600 up to a couple of thousand, plus shipping.

As for how long it takes to complete a carving, there are many factors. The actual carving might take a few hours or up to several days, depending upon size, and if you count the shipment of logs and the smoothing and painting, it could take a couple of weeks. Then there’s the weather. “Paint is hard to dry when the temperature is under 50 degrees,” he says.

They say money doesn’t grow on trees, but carving wood has paid off for Dockery—even if it did go against the grain of his family’s livelihood.

“It was a big leap [to go] from farming to carving,” Dockery says. “Chainsaw carving just was not on anyone’s radar, but they have been supportive.”