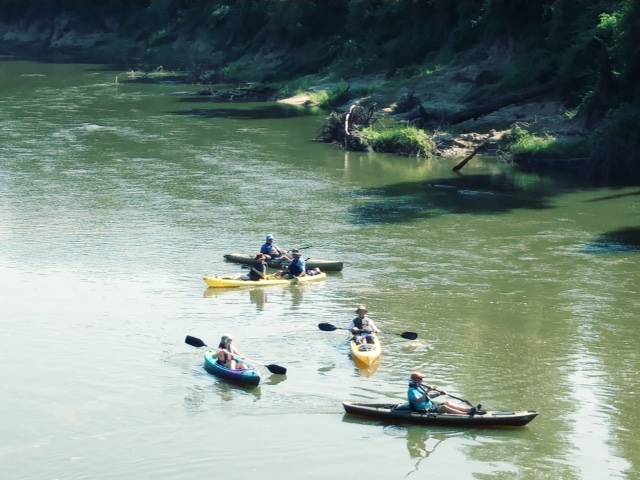 Two years in the making, a winding 19-mile stretch of the Sabine River in East Texas has become the latest inland paddling trail designated by the Texas Parks & Wildlife Department. The Sabine River Sandbar Paddling Trail “will be a conduit for folks to get out to enjoy the outdoors and take ownership to protect the river,” says Dr. Michael Banks, a retired dentist from Jacksonville who helped push for the trail’s development.

This section of the Sabine’s secluded tree-lined course, near Carthage, navigates no man-made obstructions, like towns, dams, or even low-water road crossings. The 19-mile trail is longer than most Parks & Wildlife paddling trails, but the Sabine’s sandbars provide opportunities for rest and overnight camping.

Novices in canoes and kayaks can handle paddling the Sabine Sandbar Trail because of the river’s normally steady flow. There are no rock-strewn rapids, and log jams are rare. “You just point the boat in the right direction, and you can get down the river,” says Banks, adding that  heavy rainfall or drought will affect river conditions.

The Panola County Chamber of Commerce and Texas Conservation Alliance sponsored the trail’s nomination, which drew on the experience of Banks and others. Anglers already were familiar with the trail’s stretch because of the annual spawning run of sand bass from February to April, when fishermen often fill their daily limit of 25 catches. Panola County Commissioners were erecting informational kiosks this week at the put-in where Farm to Market Road 2517 crosses the Sabine near Carthage, a take-out 15 miles downstream at McFadden Landing on County Road 438, and another 4 miles downstream at Yellow Dog County Park on CR 455.

“It can be an all-day affair, so plan accordingly,” says Banks, paddling trail coordinator for the Texas Conservation Alliance. He notes that a 4-mile paddle is also possible on the bottom end of the trail, from McFadden Landing to Yellow Dog Park.

Waterfowl sightings “include osprey, great blue herons, kingfishers, and various kinds of ducks,” according to Texas Parks & Wildlife’s announcement. Perhaps a bald eagle may be soaring above the native oak, elm, and pine trees on the banks. Deer, hogs, and wild turkeys are present, and so is an occasional alligator. The Sabine’s public-access white sandbars allow trail users to avoid issues with shoreline property owners.

The Sabine River Sandbar Trail is the Texas Parks & Wildlife Department’s 78th paddling trail. It joins 10 others in the Caddo region and nine others throughout the Piney Woods regions.