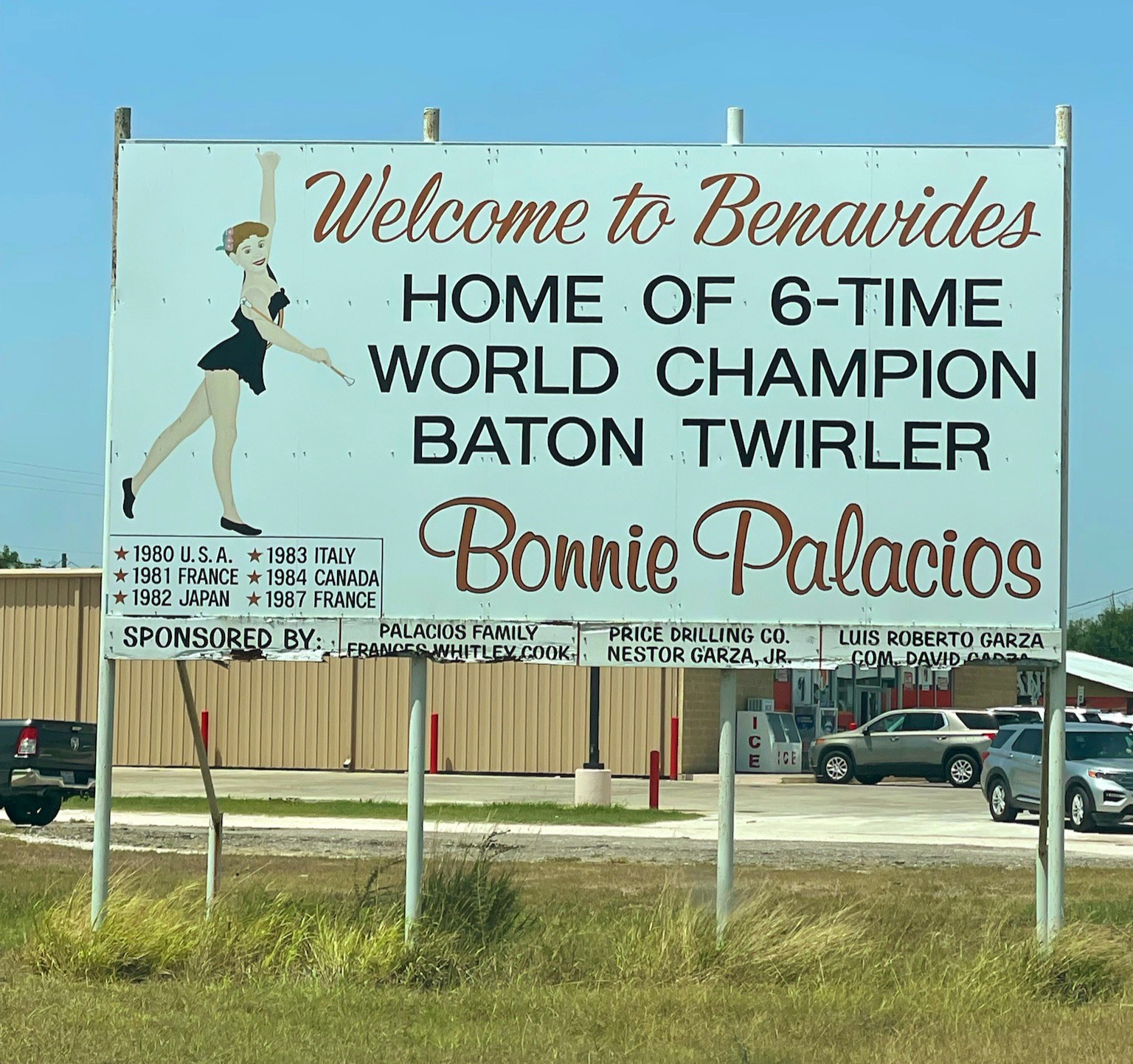 If you meet Yvonne “Bonnie” Palacios today, you’d be hard-pressed to learn she’s a six-time world champion baton twirler. In 1980, at just 10 years old, she won her first world championship and later went on to teach the sport around the globe and perform with Cirque du Soleil.

“I’ve always just been quiet about who I am or what I did,” says Palacios, who now works as an executive coordinator for the City of San Marcos. “A lot of my friends don’t even know. It’s not something that I typically talk about.”

But in the small South Texas town of Benavides, everybody knows her story. In fact, it’s hard to miss. A billboard at the city limits tells visitors: “Welcome to Benavides, home of 6-time world champion baton twirler Bonnie Palacios.” In a painting on the left side, a young red-headed Palacios poses with her batons.

While Palacios herself may be quiet about her success, her father, Delio, certainly was not. With the help of community members, he erected a large sign to honor his youngest daughter’s accomplishments in the 1980s, after her sixth world championship win. And when that sign became worn down about a decade ago, he put up a sturdier one, which still stands today on State Highway 359.

“He was always so proud,” she says. “That’s all he ever talked about was his kids and all of the accomplishments that they made.”

Palacios grew up in a sports family. Her brother was a boxer, and her sister twirled. It didn’t take long for her to follow in her big sister’s footsteps. She picked up a baton at just 2 years old—so young she can’t even remember a time before twirling.

“I never knew any better,” she says. “It was my life. It was like me getting up and brushing my teeth.”

Palacios was a natural, according to her coach Frances Cook, who taught lessons in Robstown, about 30 minutes outside of Corpus Christi. So twice a week growing up, Palacios’ parents drove her and her sister the 90-minute trek to practice. It was clear she was a talent from the start.

“Her hand-eye coordination was totally advanced,” Cook says. “It was pretty amazing. And she had extreme focus, complete and total focus. When she went on the floor, she was mesmerizing.”

When she wasn’t at practice, Palacios was perfecting her skills in dance lessons and gymnastics classes. During the school year, she went to the gym before and after school to practice. In the summers, she was at the gym eight to 10 hours a day—and the gym in town didn’t have air conditioning.

“We would open all the windows, and we would practice in the heat,” says her older sister, Aidee Palacios Gonzalez, who helped Palacios train over the years.

With lessons, costumes, and competitions, baton twirling is an expensive sport. And the Palacios weren’t wealthy. In order to pay for the expenses, her mother, Oralia, and Delio would host bingos, sell barbecue plates, and organize raffles. The community also pitched in to help.

“They never ever, ever said, ‘You can’t go, we don’t have the money,’” Palacios says. “That was never in our home. We always went because our parents made it possible.”

When it came time to travel to competitions, the family drove straight there and back. Without the money to stop at hotels or restaurants, her parents alternated driving shifts, and her mom packed sandwiches and fried chicken for the road.

“We were poor, but what we lacked in money, we had in emotional and mental strength,” Aidee says. 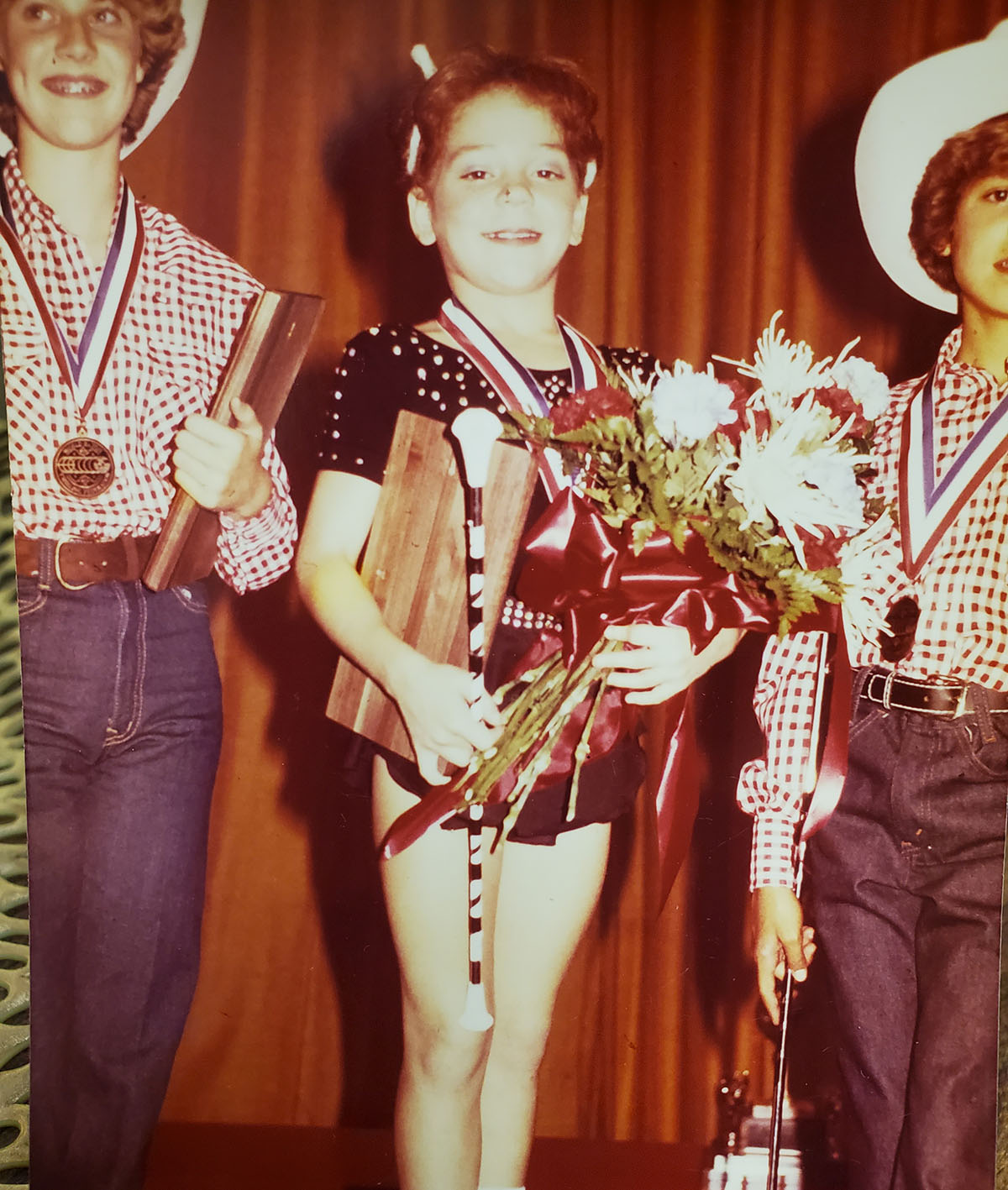 In 1980, the very first baton twirling world championship was held in Seattle, Washington. The Palacios family drove from Benavides to Seattle—a two-day drive—so Palacios, then 10 years old, could compete in the junior division. The other competitors had on extravagant, expensive costumes, Aidee remembers, but Palacios went on stage with a simple black leotard and skirt from a ballet store.

“The costume cost $10, and she won the world title that year,” Aidee says.

Palacios was unstoppable. She went on to win gold again the next four years in a row, traveling to France, Japan, Italy, and Canada. In 1985 and 1986, she took the silver medal, and in Paris in 1987, the final year she competed, she won gold once more. Cook, who coached Palacios throughout all those years, says she was an inspiration to many around the world.

“She was revered,” Cook says. “When she performed, all of the competitors from all of the countries and their coaches and their fan clubs would all run into the gym to see her perform. You could hear a pin drop because everybody was so anxious to see her go on.”

Back home in Benavides, Delio wanted to ensure his daughter was properly recognized for her accomplishments. He and some friends got together to put up a sign for her. They found an artist—Robert Klabunde from nearby Alice—to paint a life-size portrait of her and do the sign’s lettering. As a surprise to then-teenage Palacios, they put it up on the outskirts of town for all to see.

“When it first came out, I was so embarrassed,” she remembers. “I was like, ‘Why is this here?’ I just never felt the need for anything.”

“People need to know what you did,” she remembers her father telling her. “I am proud of you. Everybody needs to be proud of you.”

After her sixth gold medal at age 17, Palacios decided she was ready to stop competing. She went on to twirl for her college, Texas A&M in Kingsville (then called Texas A&I). She traveled to various countries teaching the sport, got married, had a child, and eventually moved to Las Vegas. While there in the early 2000s, she was scouted by Cirque du Soleil, one of the world’s most famous circus shows. The troupe needed an expert baton twirler for its show in Vegas called KÀ, so they reached out to her and asked her to audition.

“I got the call saying, ‘Welcome to Cirque du Soleil,’ and my life was completely changed after that,” she says.

She played the role of the chief archer’s daughter and started performing two shows a day, five days a week, bringing her young daughter along with her to rehearsals. After about five years, she stopped performing to focus on raising her daughter. They eventually moved to Canyon Lake, where they live today.

Palacios remains a legend in the twirling world. Just visit the website of the World Baton Twirling Federation—which hosts its next world championship competition in Italy Aug. 1-7—and you’ll see her name mentioned in the federation’s history.

Over the years, Delio maintained the wooden billboard in Benavides. When it became worn down by the rain and sun, Delio decided the town needed a new one and he found the sign’s original artist, who agreed to redo it. Several businesses sponsored the new billboard, which Delio insisted be made of metal this time.

“So no storm is going to harm it, and it’s going to stay the same forever,” he’d say. “Because when I’m gone, I want it to continue to stay up.”

Now 52, Palacios doesn’t feel embarrassed by the sign like she did when she was a teenager. She’s grown to appreciate having a marker of her accomplishments, a landmark of her past that she can return to each time she visits home.

“It’s something that lives on, whether I move away or come back,” she says. “It’s part of the town.”

She hopes it serves as a reminder to other young people that anything is possible, no matter where you’re from. “The sign is not there to bring attention to my awards,” she says. “The sign is there to bring attention to what I was able to do from a small town. And when you have the support of your parents and your coach and your siblings, you don’t have to be rich and fancy and come from a big city to be able to be somebody.”

And for the Palacios family, the sign is a reminder of their father’s love. In May, Delio died of colon cancer. After his funeral, the hearse stopped by the billboard so he could see it one last time.

The sign has always been important, Palacios says, but now it’s even more important. “I couldn’t have ever done it without my mom and my dad ever—money-wise, support-wise,” she says. The sign is a testament to that.

This summer, Palacios went back home to be with family on her father’s birthday. She drove down State Highway 359 to visit the sign, and noticed some pieces on the bottom were starting to fall apart.

When asked who’s going to take care of the sign now, she says, “I have no idea.” But then she thinks of her father and how he wanted her to be proud. Maybe now she’s ready to pick up that baton herself. “It could possibly be me, and I’m OK with that,” she says, “because it’s carrying on what he would have wanted me to do.”