Roadside Oddity: The Geographic Center of Texas Between Brady and Brownwood

A curious Texan wanted to know where it was, setting off a debate between two towns in the heart of the state 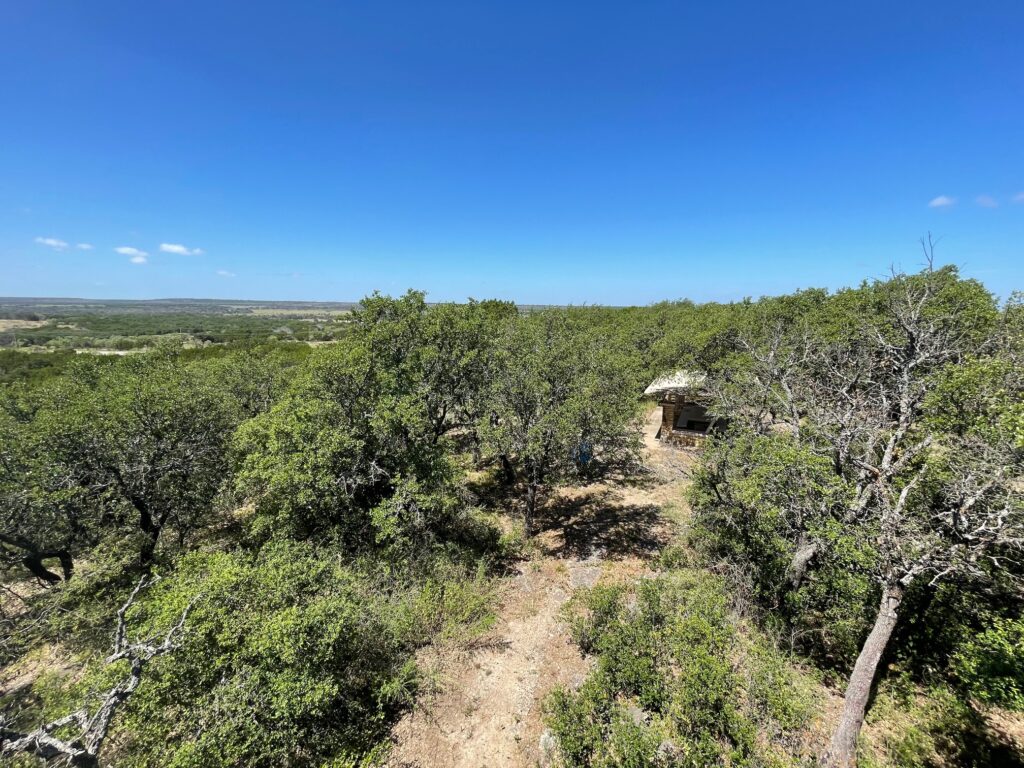 The view in the general direction of the true geographic center of Texas from the observation tower at Heart of Texas Park. Photo by Paul Brown.

Texas is so big, the landmarks available to visit seem endless: the Alamo, the State Capitol, and the State Fair’s Big Tex, just to name a few. Millions visit them every year. Still, there’s one somewhat obscure landmark that’s at the center of all things Texas that countless motorists pass by all the time without even a notice.

But if you’re as observant as Douglas McMurrain, it’s a must stop.

“I was just driving up north to see some family, and I passed it on my way up and coming back thought I might as well stop and take a picture of it,” he says.

Since 1963, in-the-know motorists like McMurrain have pulled over to take in the tourist information marker placed on the east side of US 377 between the small cities of Brownwood and Brady proclaiming this the “Geographic Center of Texas.”

“It’s a big state, for sure,” says McMurrain, who’s originally from Colorado and currently serves at Lackland Air Force Base in San Antonio. After a selfie, he takes in the quick geography lesson on the metal plaque, then heads on his way.

I first became aware of the marker in 1975, thanks to my dad, a proud Texan who loved to travel and took me to see it. More than 45 years later, I’ve made the pilgrimage once again, bringing my wife this time. Things look just as they did, except for the slight crack near the bottom of the marker that’s been soldered together, perhaps caused by the weight of the impressive statistics shared. For instance, the marker notes that Texas comprises 7.4% of the total area of the United States.

“Fifteen of the 50 states could be readily accommodated within Texas’ borders—with more than 1,000 square miles left over,” the text explains, while also sharing the straight-line distance to the furthest points in each direction. The most westerly point noted on the marker is along the Rio Grande River above El Paso, for instance, some 437 miles away.

This is old hat to my wife, who has visited this place many times before as a kid growing up around these parts. When she posts the photo I took of her at the marker on Facebook, a friend of ours, Sheryl Kirchner, replies with some local lore. She reminds us that her father was with the Texas Highway Department when they installed this mini-yet-significant marker.

“The initial reason that they found the geographical center of Texas was because Brady and Brownwood were fighting over the right to use the slogan ‘Heart of Texas,’” she says. “Brady won because they were closer.”

Those in Brady understandably claim the title “Heart of Texas,” as displayed proudly on a stone monument outside the McCulloch County Courthouse. Brady is  19.5 miles southwest of the marker, while Brownwood is 24 miles to the northeast. 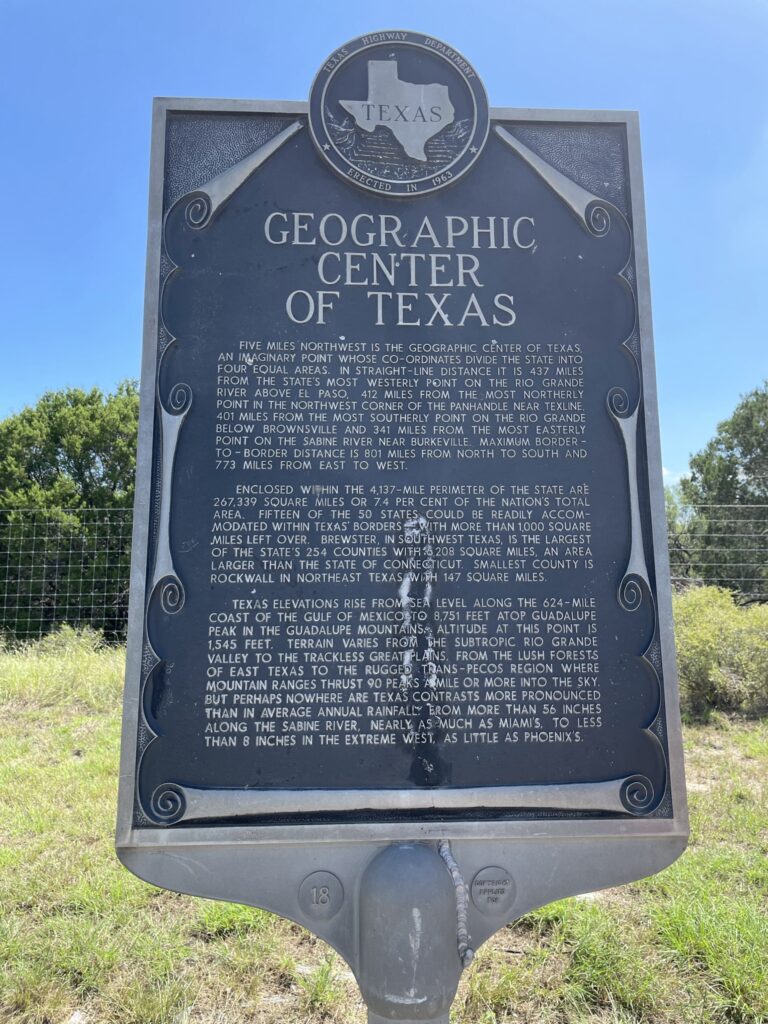 Now, it’s important to note that the marker was not placed at the exact center of the state. That’s 5 miles northwest on private property, the marker points out. So, if you visit the marker, you’ll also want to drive about a quarter of a mile south and pull into the Heart of Texas Park, complete with a few picnic tables and a small observation tower you can climb to see the true center amid the rolling hills, oak and mesquite trees, round hay bales, and cattle.

And just how do you determine the center of such a massive state? The marker explains it’s an imaginary point “whose coordinates divide the state into four equal areas.” According to Bill O’Hara, president of the Texas Society of Professional Surveyors, at some point in the 1930s a citizen wrote a letter inquiring about the location. and in response, the Texas General Land Office traced the geographic center to a private ranch in McCullough County.

In the early 1990s, surveyors were given permission to hold a seminar on that ranch by the landowners, who were curious about finding the exact spot on their property. Doing what surveyors do, they confirmed the precise location based on the General Land Office’s criteria outlined in that letter. O’Hara says there’s now a small stone marker placed at the exact spot that only the landowners can see and admire.

“And from that spot, the distance to either Brady or Brownwood is about the same,” O’Hara estimates.

And while that might encourage more friendly debate, there’s no debating a stop at this historical marker that’s as close as the public can get to the exact geographic center will make anyone appreciate the majesty of the Lone Star State.