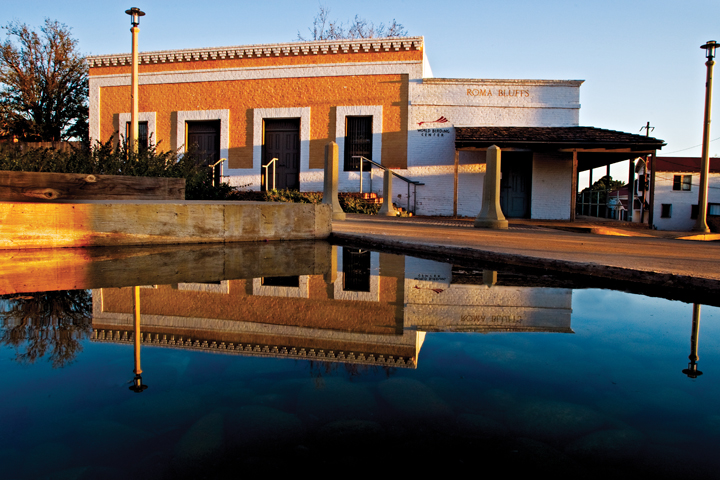 The Roma Bluffs Birding Center is housed in the 1878 Ramirez Store and Residence. (Photo by Larry Ditto)

The epicenter of Starr County’s birding activity is the Roma Bluffs World Birding Center, on the banks of the Rio Grande in the small town of Roma. One of nine sites that make up the World Birding Center network (see sidebar, page 48), the Roma Bluffs location holds another distinction: It occupies two restored buildings in Roma’s National Historic Landmark District. The district features a central plaza surrounded by vintage structures that illustrate building techniques used along the Rio Grande during the 19th Century. Several of the structures were designed by Heinrich Portscheller, a German architect who arrived in 1879 and combined European styles with local stone and ornate brickwork.

“Roma Bluffs’ historical component really sets it apart,” says Nancy Brown, public outreach specialist with the South Texas Refuge Complex, which manages the birding center. “It not only has an abundance of birds and other wildlife, but also this unique setting of a community rich in history with a beautiful town square. It’s such a quaint town—really off the beaten path.”

Roma traces its history to Spanish Colonial times in the mid-1760s, when ranchers from nearby Mier, a town on the south bank of the Rio Grande, settled what were then two adjoining communities, Roma and Los Saenz. (The two have long since incorporated.) After steamboats began traveling the river in the mid-1800s, many Roma residents—especially cotton farmers and cattle ranchers— depended on the river traffic for their livelihoods. Later, the elegant Portscheller structures on the plaza provided the backdrop for Elia Kazan’s 1952 movie, Viva Zapata!, starring Marlon Brando and Anthony Quinn.

Local historian Jesus Correa says eight buildings on the plaza have been restored since 1994, thanks to a public-private partnership that involved the City of Roma, the Meadows Foundation, the Texas Department of Transportation, and U.S. Fish and Wildlife Services. In October 2008, the restoration work earned the historic district a National Preservation Award from the National Trust for Historic Preservation.

“The City of Roma plans to restore other buildings in the next couple of years to make room for a museum and a visitor center with information about local history,” says Correa. ”We’ve already begun offering walking tours of the historic district led by local volunteers. We want people to know about the historical and cultural treasure we have here.”

While Roma’s intriguing setting promises to draw an increasing number of history-minded tourists, most visitors today come for the birding. “Roma is fabulous year round,” says Nancy Brown. “You can see birds here that you can’t see anywhere else in the United States. For example, Starr County is one of the few spots where you may find five oriole species—Altamira, Bullock’s, Audubon’s, orchard, and the hooded oriole.”

At the Roma Bluffs World Birding Center, visitors find exhibits about the region’s wildlife, as well as staff and volunteers eager to share information about recent sightings and nearby birding hotspots, such as Falcon State Park or Salineño, both less than 30 minutes away. Christine Donald, the center’s outdoor recreational planner, explains why so many birds can be seen in the region: “The Lower Rio Grande Valley is a vital migratory pathway and stopover for millions of songbirds, raptors, shorebirds, and waterfowl,” she says. “It acts like a pinch point, where birds funnel through on their journeys south in the fall and north in the spring. And being so close to the border, we also have an excellent opportunity to see a variety of birds from Mexico!”

Both people and birds travel great distances to get here: A log in the center reveals visitors from as far away as Waterloo, Ontario, and Seattle, Washington. During Killeen resident Kelly Jones’ visit, volunteer Dan Gatlin unfolds a map and shows Jones where to spot such rare finds as the white-collared seedeater—a Zapata County bird that occasionally makes its way to Starr County—and the painted bunting, with its bold splashes of fiery red and ocean blue.

An amphitheater behind the center provides a spacious setting for programs about local wildlife and their habitats. The center also offers a weeklong children’s camp each summer. A short walk takes visitors to a wooden observation deck set atop 200-foot-high sandstone bluffs overlooking the Rio Grande. The deck has a mounted scope for wildlife viewing and illustrated signs that describe Roma’s history and culture, as well as its flora and fauna. It also provides a magnificent view of the river flowing toward the coast, Roma’s famous green bridge (the 1927 International Bridge is one of Texas’ few remaining suspension bridges), and  on the other side, the Mexican city of Miguel Aleman.

Jim Bangma, a retired New Jersey police officer, has made a yearly trek to Starr County since 1985. He enjoys hanging out on the observation deck and watching scores of birds feeding and preening near the edge of the historic waterway. As he looks on, soras, gad walls, and American widgeons meander through the bright green vegetation and black phoebes fly about, catching insects, while ribbons oflight dance across the water.

Bangma, who has watched birds throughout the world, prefers the birding here over that of more southern sites in the Lower Rio Grande Valley. “This area hasn’t been developed like other parts of the Valley;’ he says. “There are just as many birds here as you’d find anywhere, except for some coastal birds. To me, this setting is more relaxed.”

Beside s the center’s on-site attractions, Roma Bluffs is a great jumping-off spot for other birding destinations. Visitors 0 can go by boat (there’s a launch near the observation deck) a short distance down the river and see large numbers of ducks, teal, and herons roosting during winter months. From January through mid-March, volunteers at the center offer guided canoe trips that start in Chapefio, about 17 miles northwest, and end in Salinefio. The four-mile float takes paddlers through an area of Montezuma bald cypress trees, which provides an impression of how the river may have looked in the past. On this tour, you’re likely to sight the ringed kingfisher (the largest kingfisher in the United States), the green kingfisher (the country’s smallest), and the belted kingfisher; South Texas is one of the few places in the nation where you can see all three.

From red-billed pigeons and Muscovy ducks to three species of kingfishers, the birding in Starr County offers the possibility of rare finds, and the Roma Bluffs World Birding Center, in the region’s historic hub, adds a special dimension. For birders, the rewards don’t come any sweeter

Roma is in Starr County, about 50 miles west of McAllen on US 83. The Roma Bluffs World Birding Center is at 610 N. Portscheller St. For more information about Roma Bluffs, as well as details about Chapeño, Salineño, and other birding sites, call 956/849-4930. Hours: Mon-Fri 8-4. Admission: Free. From US 83, turn south on St. Eugene de Mazenod Ave., and go 1 block south to the plaza. Roma Bluffs WBC is on the northeast corner of Portscheller and Convent streets. For more information about Roma, or to schedule a tour of the town’s historic sites, call the Roma Chamber of Commerce at 956/849-4296 or Roma City Hall at 956/849-1411.