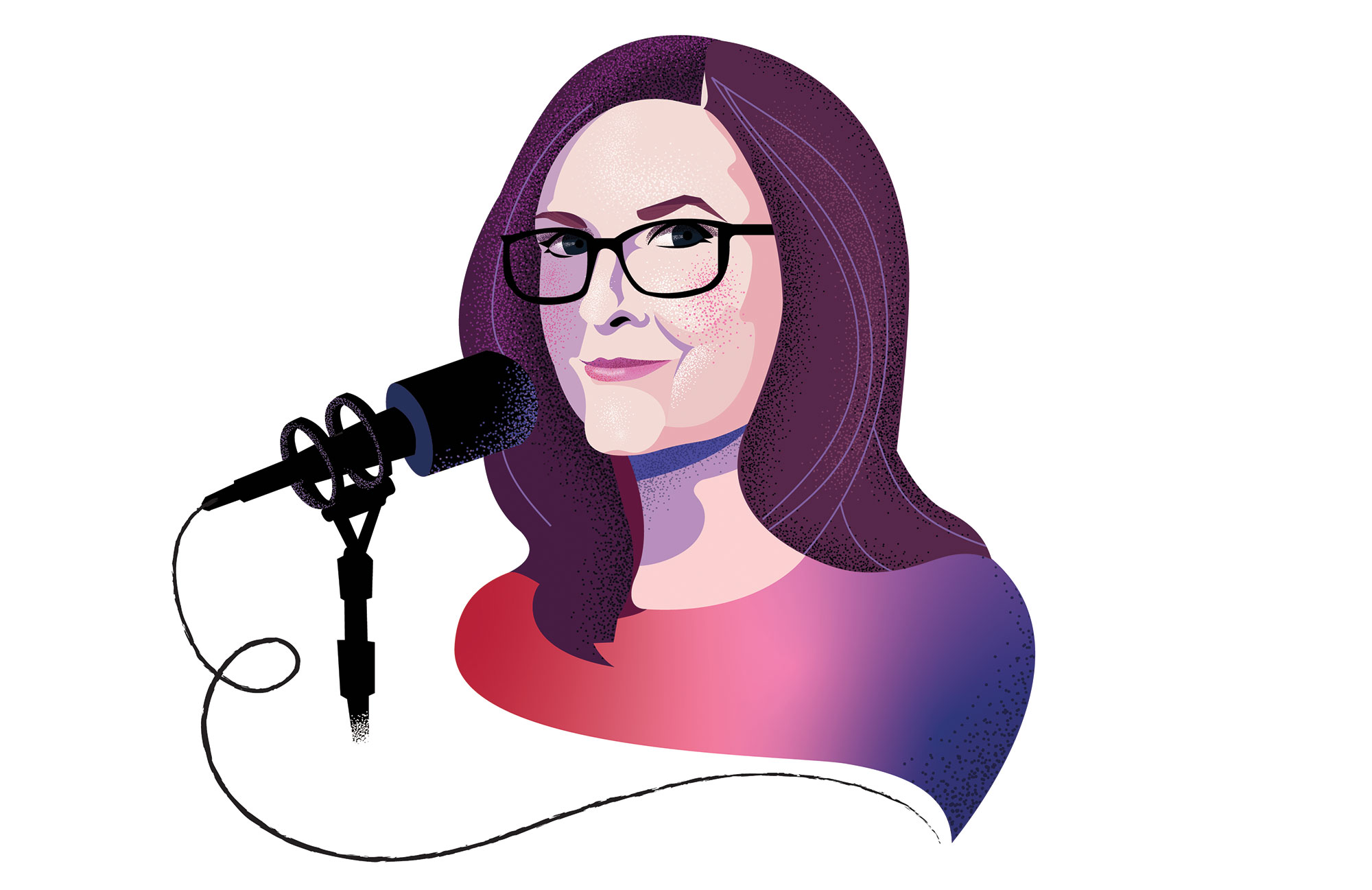 Tune in to your local public radio station around lunchtime on a weekday and you’re likely to hear the dulcet voice—and sharp questions—of Krys Boyd. The host and managing editor of Dallas-based KERA’s Think delivers a one-two punch of mellow curiosity and deeply considered topics in her two-hour interview show. While she’s hosted big-name guests like actor Bryan Cranston and U.S. Sen. John Cornyn, the most fascinating episodes often cover topics outside of the 24-hour news cycle. Boyd has tackled everything from spelling bees to failed spy techniques.

Originally from Long Island, New York, Boyd’s family moved to El Paso when she was 13. Her love for writing and asking questions led her to study radio, television, and film at TCU in Fort Worth and a career in TV news and broadcasting that took her to KERA in 2001. In November 2006, she created Think.

“We try to keep it interesting to everyone and try to recognize that there are a lot of different ways of being an American, a Texan, and a person in the 21st century.”

“I was elated by the idea that I would have this space where I could spend two hours every day exploring different ideas—and no two conversations would be exactly alike,” Boyd says.

The show launched statewide in 2017 and now airs from Beaumont to Lubbock, as well as in parts of Arizona and Kentucky. The podcast, which gets 250,000 monthly downloads, reaches an even wider audience. “A few years ago I got a funny email from a man in Finland,” Boyd recalls. “He said, ‘I like to listen to your podcast when I take my bubble bath every night.’”

Q: What was it like growing up in El Paso?
A: I got to know the border as a place that is challenged and has problems that don’t necessarily exist in other parts of the country, but is not terrifying and is not foreign in the way some people think. It was interesting to me to engage with people who were tied to their culture of origin. Some of my classmates in New York had immigrant parents, but they were mostly European immigrants. So meeting people who were connected to their American-ness but also to their Mexican heritage was wonderful.

Q: What do you like to do in El Paso when you go back?
A: The highlight now is seeing people who I love, but everyone who comes to El Paso is told to go to H&H Car Wash and Coffee Shop, and that’s something that we still do. And Hueco Tanks [State Park], which is nice for hiking and easier to get to than Big Bend. The fall in El Paso is the most beautiful—the wind dies down, and the sky is crystal blue.

Q: How do you come up with the topics for the show?
A: The theme of the show is really the “why” questions and the “what if” questions. A lot of journalism is basically just telling you what happened and the reasons for it. I want to know what else might have happened—what you thought you knew, but didn’t. I get really excited when something comes in that is going to turn what you thought you understood upside-down. I’m perfectly comfortable with someone who has a perspective on something that is pretty far in one direction, talking to them for an hour, and then three weeks later, talking to someone who’s got a really different perspective on the same subject. Sometimes people don’t want to hear someone whose conclusions are different from their own, but a lot of people are comfortable being intellectually challenged in that way, so it’s fun.

Q: Is the listener call-in portion of the show hard to manage?
A: My grandmother used to say, “You catch more flies with honey than with vinegar.” Sometimes it’s just creating a climate where we’re all going to listen to each other. As we’ve done more shows about race and identity, and the challenges of people from communities of color and otherwise marginalized communities, I’ve been really gratified that people are willing to listen. Sometimes people will call and be frustrated and not get it, but even then you give them the opportunity to say, “Here’s why I don’t get it and why this doesn’t make sense to me.” And very often, because of the tone of the show, it’s not starting a debate where everyone’s trying to make their point and no one’s trying to listen. We try to keep it interesting to everyone and try to recognize that there are lots of different ways of being an American, a Texan, and a person in the 21st century.

Q: What’s been your most enlightening topic or guest?
A: I have a new one like every week. Sometimes topics will stick with me for a long time, and sometimes they’re more ephemeral. I think my favorite interviews are those where there’s chemistry between me and the guest. And it doesn’t have to be about anything emotional; there are just some people you can have a conversation with and they’ll be extremely candid. It’s more about the connection. I always come away most enlightened by the people who are honest and unguarded.

Q: How did the show change when it expanded beyond DFW?
A: The audience is much bigger. I like the idea of giving people both within Texas and outside Texas an idea of Texas. It is not what everybody thinks it is. We’re not all Friday Night Lights, and we’re not Dallas. Another change is we’ve gotten some top-of-the-line guests who weren’t interested before. Now that we have access to more markets and bigger markets, they’re more willing to take the time. But to be honest, I’m just as excited about guests you’ve never heard of as I am about big guests. It really is about the ideas. You can be toiling in obscurity, discovering the properties of mushrooms, and that’s just as exciting to me as, you know, talking to Madeleine Albright, which was awesome.

Q: How has the show evolved over 13 years?
A: It took a while for me to figure out the true voice of the show. We’ve always been an interview program, we’ve always been guided by journalistic principles, but I’m not a reporter. The idea that we’re about novel ideas took me awhile to fully understand and appreciate. I’d like to think that we’re still evolving. I’d like to have more conversation around the table and say, “That’s really interesting, who can we find to talk about this?” With a small staff, it can be difficult to find someone who checks all those boxes and is a great conversationalist.

Q: What do you like most about living in Dallas?
A: When I do jury duty or go get my driver’s license renewed, there’s a huge cross-section of different people. Some of them were raised here; a lot of them are coming from other parts of the country and world. The city is not what everyone likes to shorthand it as. It thinks more deeply than we get credit for. I live pretty close to downtown Dallas, so I’m just a hop, skip, and a jump from a lot of interesting things. There’s the Trinity Forest and Cedar Ridge Nature Preserve. There’s the Dallas Arboretum. We have great art museums and great restaurants. I don’t think it’s artificial; there’s room in Dallas to be who you are without apologizing
to anyone.