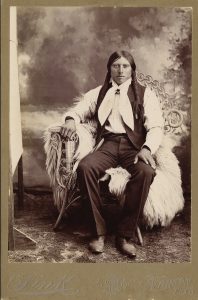 Around the 1890s, Pautchee, a Comanche man, sat down to be photographed by Daniel P. Sink. The photo of Pautchee, which was incorrectly identified as Comanche chief Quanah Parker in our weekly Traces of Texas post on July 17, exemplifies the photography trend of the time: cabinet cards. After creating his photography studio in Vernon, Texas in 1889, Sink specialized in cabinet cards, an invention of the 1860s where portraits are mounted onto cardboard.

About 15 years after cabinet cards were introduced, Pautchee lived through the Red River War. In 1874, the United States fought with the Comanche, Pautchee’s tribe, as well as the Kiowa, Southern Cheyenne, and southern Arapaho  tribes. Pautchee was later photographed in 1875, the same year the war ended, next to Tonawer, brother-in-law to Isatai, who led the Comanche alongside Quanah Parker to their surrender and new reservation at Fort Sill.

Pautchee later had a son, John Pautchee, according to Jonathan Holmes, who runs a Facebook group called Native North American Indian Old Photos. John Pautchee received an allotment of land as a result of the United States Supreme Court Case State of Oklahoma v. State of Texas in 1923, and he lived in the Quanah Township in Comanche, Oklahoma.

Hʉwʉni Townsley knew Sink’s cabinet card photo of Pautchee seated in a chair couldn’t have been of her great-grandfather, Quanah Parker. Townsley has seen pictures for years and grew up learning his story from her relatives, including her great-aunt Alice Parker who lived with her family until Townsley was 12 years old.

“She would tell stories about her father and old Lawton and when it was a tent town and the mission that she grew up on,” Townsley says.

Quanah was a war leader of the Quahadi (“antelope”) band of the Comanche Nation and son of Comanche chief Peta Nocona and Cynthia Ann Parker; he emerged as a dominant figure in the Red River War and later spent time in Lawton.

After discussing with her relatives, she came to the conclusion that this photo was of Pautchee. (Pautchee has a variety of spellings due to the fact that Comanche is an oral language, but this is the most popular spelling.) 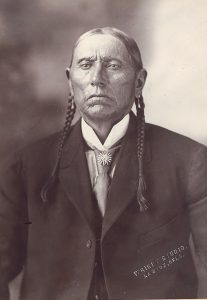 Quanah Parker in 1910, one year before he passed away. Photo courtesy of the Oklahoma Historical Society Photographic Collection

Since Townsley is a descendent of Quanah Parker’s wife Weckeah, she had access to Weckeah’s story through Alice Parker. Weckeah was one of many wives but held the privilege of birthing Quanah’s oldest and youngest child. Townsley learned that Weckeah had chosen not to live with Quanah Parker and sent her daughters to him under the stipulation that he was the one to care for them, not the other wives.

Alice Parker, who was like a grandmother to Townsley, talked about when her father would drive them around in a gifted stagecoach and how she and one of her sisters, Wanada, would learn to translate English Sunday services into the Comanche language. Eventually, Wanada went on to do a bulk of her father’s correspondence, and Weckeah managed the land and cattle when Quanah was out.

Quanah Parker passed away in 1911 and remains buried at Chief’s Knoll at Fort Sill, Oklahoma, so Townsley never met him. However, because of all of the towns named after him, including Quanah, Texas, his legacy has been preserved across the state.

Editor’s Note: An article posted on July 17, 2020 in our weekly Traces of Texas series incorrectly identified the above photo of Pautchee as one of the earliest photos of Quanah Parker. After hearing from members of Parker’s family, we removed the story and retracted the social media posts with a correction.