Traditions, Folklore, and Other Tales About Thanksgiving in Texas

From college football games to turkey trots, the Lone Star State has a unique history with the holiday 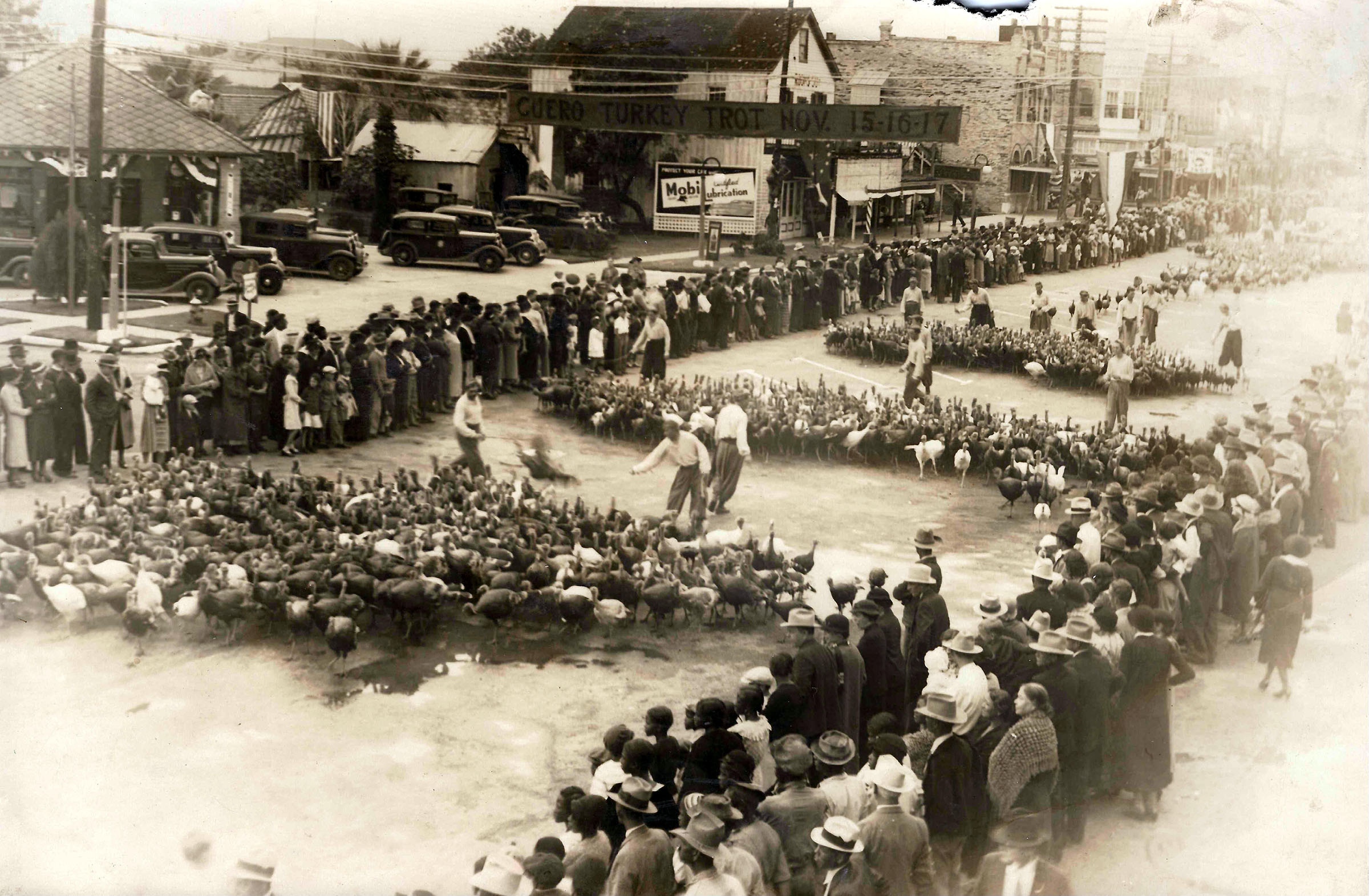 There’s no denying that 2020 has been a challenging year, but I’d bet the farm that most folks will still express some gratitude this Thanksgiving, if only for the imminent arrival of 2021.

But, while you’re wrasslin’ with the big bird at a socially distanced table or hoarding a third piece of sweet potato pie behind your mask, consider these Meleagris gallopavo-related tales and facts that will have you saying a blessing for the Lone Star State.

To begin, Texas is one of only three American states to be graced with a metropolis named Turkey. And ours is the only one to present the universe with a genuine King of Western Swing. Turkey, Texas, pop. 421, celebrates its famous homeboy fiddler with an annual festival called Bob Wills Day. (Next year will be the event’s 50th year and will also celebrate Wills being inducted into the Texas Cowboy Hall of Fame.)

In terms of pure turkey, however, it must be acknowledged that Turkey has got nothin’ on the community of Cuero, the self-proclaimed Turkey Capital of the World. Each October, the town gets folks in a Thanksgiving groove with its annual Turkeyfest. The event goes back to the early 20th century, when turkey farming was a major part of DeWitt County agriculture. The festival formerly known as the Turkey Trot debuted in 1912 and featured a “turkey drive” in which thousands of the birds were herded through Cuero’s streets. A carnival, dance, football game, and agricultural exhibits filled out the fun.

After Cuero instituted its Turkey Trot, a popular but controversial nationwide dance craze appropriated the name. “They even put women in jail for doing the dance,” says Amber Fitts, director of the Cuero Heritage Museum, where a permanent exhibit, “Cuero Talks Turkey,” includes exotic costumes and other artifacts from bygone trots.

Historically, Texans have embraced the act of expressing gratitude for nourishment of the body and restoration of the soul with such originality that two separate “First Thanksgiving” events on Texas soil are said to have predated the pilgrims’ appreciation fest of 1621. The earliest occurred in 1541, when an expedition headed by Coronado seeking the Seven Cities of Cibola was led to Palo Duro Canyon by a Pueblo Indian the Spaniards called La Turque (or, the Turk). There, on the day of the Feast of the Ascension, Fray Juan de Padilla celebrated Mass as Teya Indians observed.

When an expedition led by Juan de Oñate reached the Rio Grande at the western tip of present-day Texas in April 1598, they rested in the area of San Elizario, giving thanks for surviving their Chihuahuan Desert trek and feasting on fish and fowl. Native Americans witnessed Oñate’s ceremonial claiming of the river valley and adjacent lands for King Philip II of Spain. Captain Marcos Farfán de los Godos dashed off a script depicting the conversion of Pueblo Indians to Christianity, and its staging by the expedition is regarded by many as the first drama performed on United States soil. El Paso countians began reenacting these events in 1991, and the First Thanksgiving Celebration continues in San Elizario each April.

Echoing those two ancient days of feasting and gratitude, for a time in the 20th century Texans actually celebrated the day twice. Normally, folks gathered to be thankful on the last Thursday of November, as designated by President Lincoln in 1863, though Texans didn’t get with the program until 1868. And even then, some agreed with Texas Gov. O. M. Roberts (1879-82), who called Thanksgiving a “damned Yankee institution.”

The modern confusion began in 1939, a year in which November had five Thursdays. President Franklin D. Roosevelt, intending to expand the Christmas shopping season at the end of the Great Depression, moved the holiday to the fourth Thursday. Congress made the fourth Thursday the official national Thanksgiving in 1941.

Mavericks from the get-go, many Texans continued giving thanks on the last Thursday of November (or the fifth Thursday, in those years when November was fat with Thursdays), the state’s “official” Thanksgiving Day. The last Thursday was also the set-in-stone date of another sacred tradition, the annual University of Texas-Texas A&M football game.

Many Texans derided the fourth-Thursday gatherings as FDR’s “New Deal Thanksgiving.” Other Texans did give thanks on the fourth Thursday, whether the particular November had four or five Thursdays. “While much of the world is at war,” said Gov. W. Lee “Pappy” O’Daniel in the early 1940s, “the citizens of Texas have so much for which we should be thankful, we can very well observe two days of thanksgiving.”

Thankfully, Gov. Price Daniel put things straight in 1957, setting Texas Thanksgiving on the fourth Thursday of November. So far, though, not even the legislature has been able to restart the Thanksgiving Day tradition of the Texas-Texas A&M football game, a rivalry that began in 1894 and lasted until 2011, when A&M became part of the Southeastern Conference. For now, it seems, Longhorns and Aggies will have to be satisfied with waving their turkey legs at the Cowboys.