Botanists expect good color this season, though drought conditions could temper the display in parts of the state. 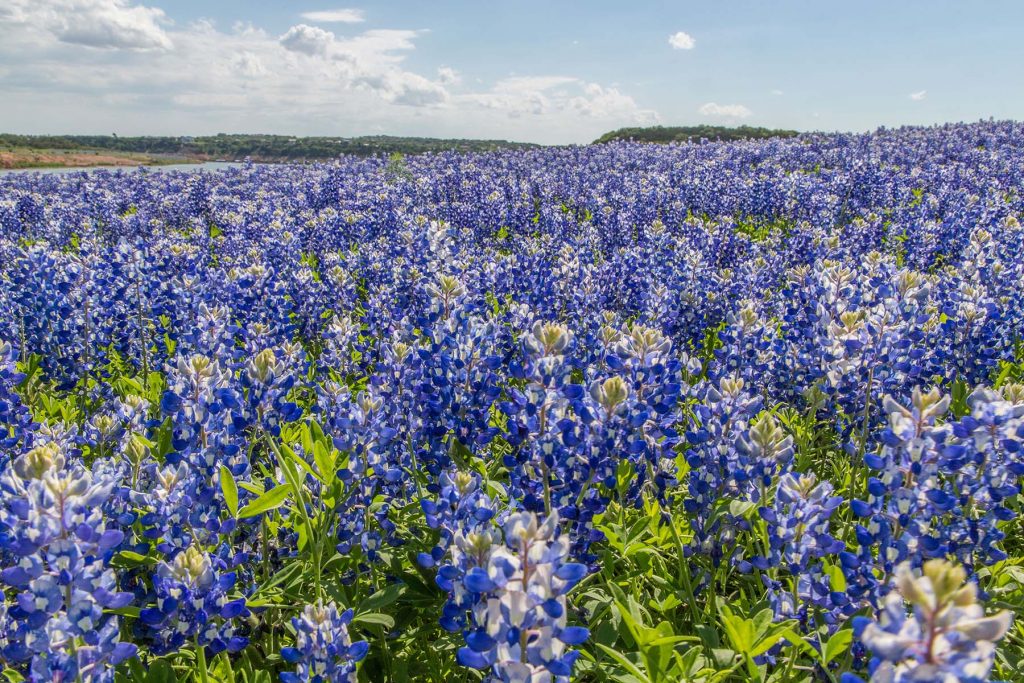 Bluebonnets at Muleshoe Bend, an LCRA park on Lake Travis, in a photo taken during a past spring bloom. Photo by Will van Overbeek

Gas up the car, pack a picnic, and charge your camera: Texas is set for a beautiful wildflower season this spring.

“Broadly speaking, we should see good, normal displays, although not as spectacular as last year,” says Andrea DeLong-Amaya, director of horticulture at the Lady Bird Johnson Wildflower Center in Austin.

Drought conditions are to blame for expectations for a less-colorful display than last year, particularly in central and south-central portions of the state. “Central Texas had a dry fall and early winter, but got good rains just in the nick of time to set us up for a good year,” DeLong-Amaya says.

Each year’s wildflowers come from seeds generated the previous year. Those seeds need adequate autumn rain in order to germinate, she says, and germinating seeds must receive adequate winter rain in order to put out roots and then bloom when temperatures start warming in spring.

A warmer than usual winter kicked off a relatively early start of the wildflower season across Texas this year. Central Texas had its second warmest winter on record, for example. By the end of January, Central Texas and the Upper Coastal Plains were already seeing the first blooms of bluebonnets, typically one of the first species to bloom. That’s early even for them, DeLong-Amaya noted. “If we continue to have warm weather and not many cold snaps, everything may be early by a couple of weeks,” she says.

Bluebonnets generally peak toward the end of March and early April. Other early spring bloomers (late February and March) include coreopsis, Texas star, and phlox. Trees such as Mexican plums, mountain laurels, and red buds bloom early as well. Mid-spring or April, pink evening primrose, wine cups, salvias, and brown-eyed Susans join in. Late spring or around May, Mexican blanket and horsemint begin to bloom.

When planning an outing to see wildflowers, consider that highway construction can remove seeds from the previous season. Disturbance of existing plants and soil also opens the door for invasive species such as bastard cabbage, brome, and Johnson grass. These invaders can crowd out native wildflowers.

“Between habitat loss in general and invasive species, wildflowers are losing ground,” DeLong-Amaya says. “All the more reason to plant native wildflowers on your own property.” 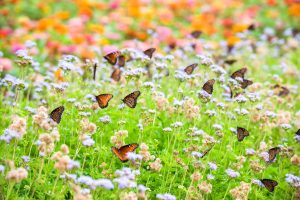 Butterflies in the Butterfly Garden at Wildseed Farms near Fredericksburg. Photo by Michael Amador

Big Bend Ranch State Park is home to its namesake bluebonnet, along with salvias and lechuguilla. Other good parks for flowers include Lost Maples State Natural Area near San Antonio and Fort Boggy State Park near Houston.

Several rest areas along US 77 between Kingsville and Raymondville offer displays of plants only in that region, including bushy horsemint and Sandyland bluebonnets.

For more news on wildflower season, check back with Texas Highways for regular updates.