Which Way is Southtown? 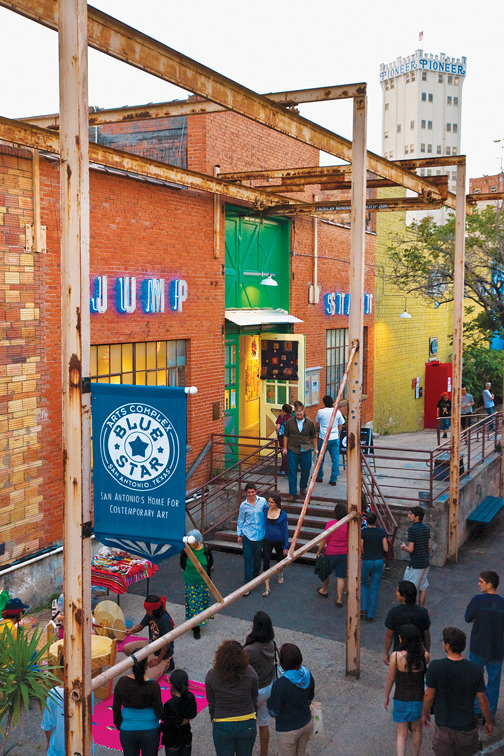 San Antonio entices travelers from around the world with splashy attractions like the River Walk and SeaWorld, as well as such popular sites as the Alamo and the historic mission trail. But what many visitors—even native Texans—don’t realize is that San Antonio shelters a thriving bohemian district just beyond downtown. Three overlapping neighborhoods (King William, Lavaca and Blue Star), known collectively as Southtown, harbor a welcoming vibe that dovetails centuries of history with modern art-house culture.

Bounded loosely by South Flores and South Presa on the west and east, Durango and Lone Star to the north and south, Southtown is rich with galleries, coffeehouses, hipster dive bars, artists’ compounds, vintage clothing stores, crafts ateliers, family-run taco joints, and chic new bistros (Oloroso, a hottie of the moment). All draw loyal customers, as do longtime favorites Rosario’s, El Mirador, and the stately Guenther House. The result: a vibrant “arts underground” that invites exploration.

Southtown is sophisticated, welcoming, and sprawling: A day-long walking tour isn’t enough to see it all. So, unless you have the legs of Lance Armstrong, it’s wise to employ a combination of transport modes: perhaps a pedicab for King William, the 150-year-old National Historic District founded by German émigrés; your own vehicle for St. Mary’s and South Alamo; and a tram or taxi from downtown to enjoy South Flores.

If you start a Southtown ramble from La Villita, as I did recently, it’s a pleasant three-block stroll across Durango/Garcia Boulevard to the border of the King William Historic District. En route, stop by the tiny, iiber-hip Vintage Housea storefront shop spun off the owner’s original in Monterrey, Mexico—lined with affordable vintage garments. Once in the historic district, pick up a walking-tour map from the San Antonio Conservatiori Society headquarters at 107 King William Street. South town encompasses King William, a diverse residential collection of Victorian architecture, and the South Alamo Street/ South St. Mary’s Street Historic District, dotted with more modest, late-19th- and early- 20th-Century houses. The development of this area parallels San Antonio’s 19th-Century growth, and these days, many structures are beautifully restored and carefully maintained, with styles ranging from Italianate, Neoclassical, and red-tiled-roof Spanish Revival to classic Victorian and Central Texas limestone. Some houses, such as the Oge House, built in 1857 by Texas Ranger/cattle rancher Louis Oge, double as bed and breakfasts.

If you’re not up for walking the whole way (as I ultimately was not), hail one of the human-powered pedicabs that circulate in this area.

After we toured King William, I chose to have my rickshaw deposit my husband and me at The Guenther House restaurant/museum. Completed in 1860, this is the original site of German transplant Carl Hilmar Guenther’s still-prospering Pioneer Flour Mills. We stayed for brunch, and I particularly enjoyed the homemade preserves that accompanied my husband’s breakfast platter, which included the signature, flaky Pioneer biscuits. And, following a sample of the biscuits, I thoroughly enjoyed my own champagne chicken enchiladas.

We departed from The Guenther House happily satisfied, and ready to walk. First, we forged a diagonal path across South Alamo to the Blue Star Arts Complex. In addition to the namesake gallery, Blue Star Contemporary Art Center (local, national, and international exhibits always thought-provoking), the renovated warehouses house artist studios, a microbrewery, galleries, lofts, a bike shop, print shops, sundry arty retailers and non-profits, along with Jump-Start Performance Co., a groundbreaking theater company that has produced more than 500 performances for 300,000 visitors since it was founded in 1985.

If you prefer more conceptual, two- and three-dimensional visual art, visit Joan Grona Gallery, which presents local, national, and international contemporary work, as well as Three Walls, an art space that encourages artists to explore more daring expressions. For an equally pleasing, but very different experience, stop in and see San Angel Folk Art Gallery, which is packed with craft arts from around the world, including textiles, vintage ceramics, jewelry, and striking outsider art, some of which is crafted from found objects.

As Hank Lee, owner of the San Angel, says, “The whole Southtown area is the quintessential old, small-town San Antonio. Out-of-towners who stay on the River Walk can get a whole other sense of San Antonio down here. The trolley is only 50 cents, and there’s a stop right at Blue Star.” Lee adds that the area’s bohemian feel is amplified “by locally owned establishments, like Jive Vintage, MadHatters, and La Tuna. You won’t find chain stores or franchise operations down here.”

San Angel itself is celebrating its 20-year anniversary at the Blue Star honeycomb, which began as a grassroots movement by local artists and now.lures more than 300,000 visitors each year.

“This is an old warehouse space that was basically renovated starting in 1986,” Lee says. “It has galleries like the University of Texas at San Antonio Satellite Space and Stone Metal Press, which work with all these local groups. Then there are studios that are also residences.”

Before I leave the Blue Star compound, I breeze by Blue Star Brewing Company and grab a taster of the brewpub’s Wheathead White, an aromatic Belgian beer with hints of coriander and orange peel. Only a taste, though—I’m still on the prowl.

A bit north of Blue Star compound, at Southtown’s easternmost boundary, is an edgy pocket where a close-knit kibbutz of artists, including musician/installationist John Mata, live and show their work in a two-block stretch of modest duplexes on Stieren Street (between Cedar and St. Mary’s)—including the experimental spaces Unit B and Sala Diaz. The folks from “the compound,” as they call it, participate heartily (like the operators of most Southtown galleries) in San Antonio’s First Friday gallery night-an arts-driven street fair that engulfs South town’s galleries and bars each month. It’s a diverse social experience I’ve enjoyed several times through the years, and invariably I stop by Bar America afterward for an icy Lone Star with local friends. Or if it’s a leisurely afternoon, I’ll sit down over soup (roasted red pepper and Gouda, for example) at MadHatters off South Alamo, a rambling teahouse with a crazy-eclectic menu of sandwiches, salads, soups, teas, and coffees, a grocery-to-go, and dozens of pastries and homemade desserts, including sublime, latticed fruit pies.

If you’re headed to South town by car on 1-35, as I’ve done in the past, a good launching point is South Flores, just east of the interstate. In SoFlo, the 1906 S. Flores complex, LoneStar Studios, and Gallista Gallery & Art Studio anchor the intersection of Flores and Lone Star streets. Artist/designer and 1906 co-owner Andy Benavides has operated Benavides Picture Framing in this renovated warehouse for 14-plus years, as well as 1906, a sleek, spacious gallery hosting monthly shows by contemporary regional artists. The art spaces and frame shop back up to a decommissioned loading dock, which is guarded by a vocal squadron of Benavides’ Chihuahuas. Also inside the 1906 complex is the small but vibrant Flight, run by “celebrity pet photographer” Justin Parr and his pal Ed Saavedra, who share a studio across the way. The property is complete with an herb garden and ramshackle half-pipe for skaters.

This little corner of San Antonio is bohemian at its most pure. (As Parr says: “It’s all about the art.”) Elsewhere in the adjoining LoneStar Studios, artists’ spaces often double as once-monthly galleries, such as the space of Bill FitzGibbons, president and executive director of Blue Star Contemporary Art Center.

“This really is a close-knit community,” says the charming, slightly disheveled Parr, who gives me a block tour. He tells me SoFlo locals often hang in backyards together or host joint exhibits. He also mentions the continuing gentrification on SoFlo street, which has introduced a flurry of upscale, converted-loft condos a few blocks north of I906. “All that development is happening right now, and people are starting to move in.”

I ask if the lofts are the latest extension of SoFlo hipsterism, and he winces gamely, then stage-whispers, ”Well … they’re kind of expensive, and most folks don’t have that kind of money around here.” Parr adds that he’d gladly purchase a fancy loft, could he afford it, but I get the sense he’s content right here, with his skateboard half-pipe and fresh produce out back.

At this point in my automobile visit, I drive to La Tuna Grill, just across the railroad tracks off Probandt Street. As Southtowners will tell you, La Tuna is a staple, a bonafide locals’ haunt. Itself a mini-compound of two funky tin structures linked by a tree-shaded gravel and cacti courtyard, it’s a great place to hang out and nosh on a great lamb hoagie sandwich, or a hefty fish taco. But remember that La Tuna closes between 2:30 and 5 p.m. every day, so go for lunch-or dinner, when the chef adds more upscale specials.

No matter where you dine or lounge, dedicate a couple of hours to meandering South Alamo, from the Blue Star/La Tuna area up to Durango. You’ll find shops like Casa Margarita, a cool little store that sells folk art and textiles along with other curiosities, and the ever-popular Jewelry Box, which specializes in estate jewelry and antiques. Or enjoy the dramatically lit Inter-Artisan boutique, which offers exquisite jewelry, glass, pottery, and woodcarvings, as well as folk art from Mexico. But most important, whether you visit Southtown by car, on foot, or by pedicab, don’t hurry. This is an area where relaxed rambling is the norm.

Who knows, if you’ve arrived in town with your skateboard, you may cajole Justin Parr into letting you try out his battered wooden half-pipe. And chances are, if you linger around Southtown long enough, somebody will tip you to an art opening that night or a communal backyard barbecue. You might even get a personally guided block tour. In this SA neighborhood, the arts scene is refreshingly chill.

San Antonio’s Southtown area extends roughly from South Flores to South Presa (west to east), and from Durango to Lone Star (north to south). Find King William District walking tour information at the San Antonio Conservation Society, 107 King William, 210/224-6163. For more on San Antonio, contact the San Antonio Convention and Visitors Bureau at 800/447-3372, or stop by the Visitor Information Center at 317 Alamo Plaza, across from the Alamo. Following is contact information for sites mentioned in the story.