Wineries Are the Rage, but Breweries Tie Fredericksburg to the Town’s German Roots 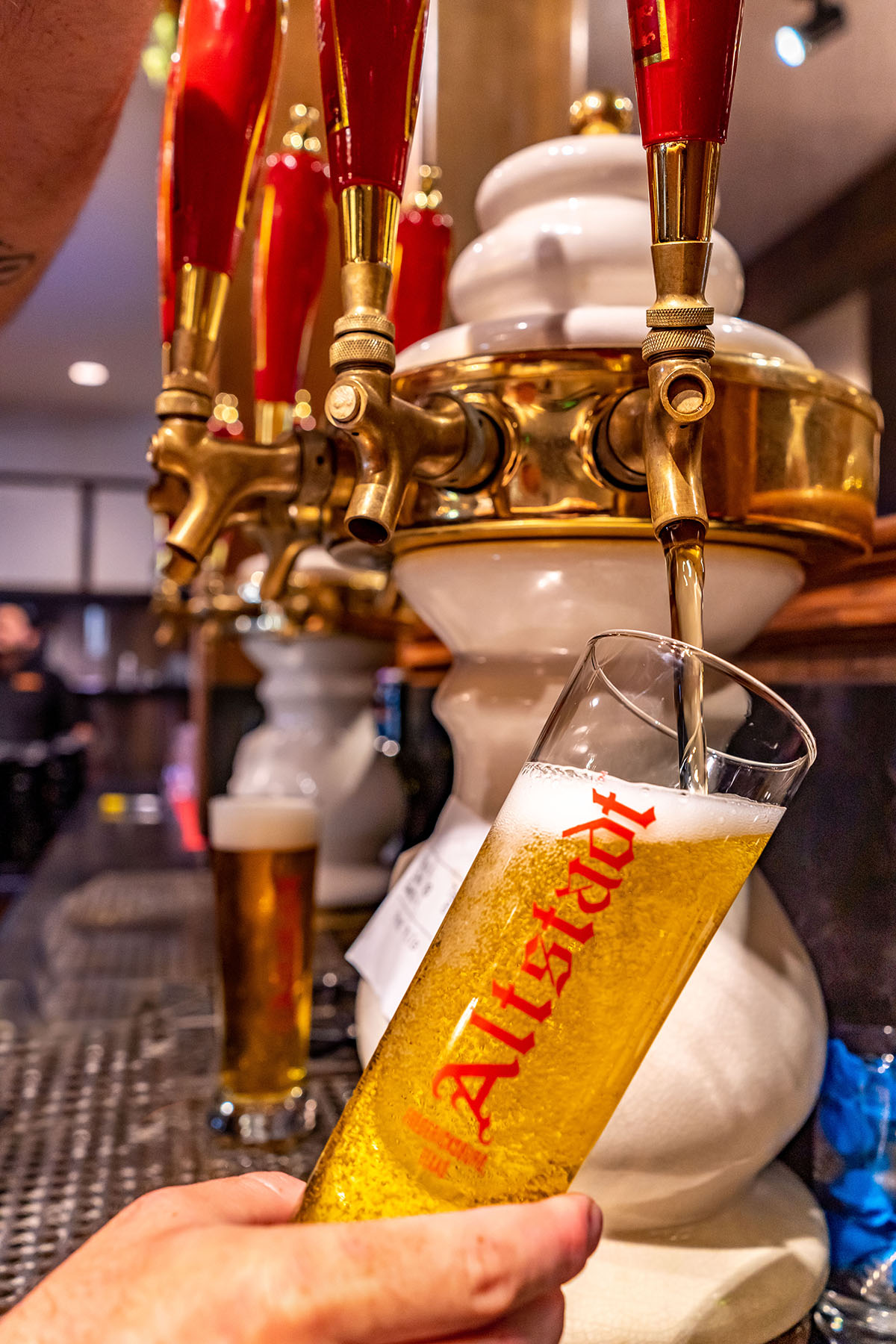 Vineyards line US 290 around Fredericksburg, but wine’s not the only thing on tap in the Texas Hill Country.

If you’d rather sip something made with hops and barley—or even apples and honey—you can stop by the oldest brewpub in Texas, sip a Kolsch in a cavernous German-style beer hall, or sample an apple-honey blend called “cyser” crafted by two former chefs.

Let’s start with the beer. You can’t miss Altstadt Brewery alongside US 290, about 6 miles southeast of downtown Fredericksburg. It looks like a German castle, and the beer garden and tasting room will have you clanking mugs like you were in Europe. Founders Billy Scripps and his son William wanted access to the type of beer they tasted overseas.

“Instead of shipping it, he made his own brewery and now we brew authentic German beer right here,” says head brewer Craig Rowan, who learned the craft at Abita Brewing Company in Louisiana. “One of the best compliments I get is when an actual native German says, ‘This tastes like home.’”

Altstadt began brewing in 2017, and the taproom opened in late 2018. Bottles and cans of lager, Kolsch, amber, hefeweizen, and light beer all roll off the production line; and five separate bars on the premises, including a basement speakeasy, pour from taps. There’s also a full-service restaurant. 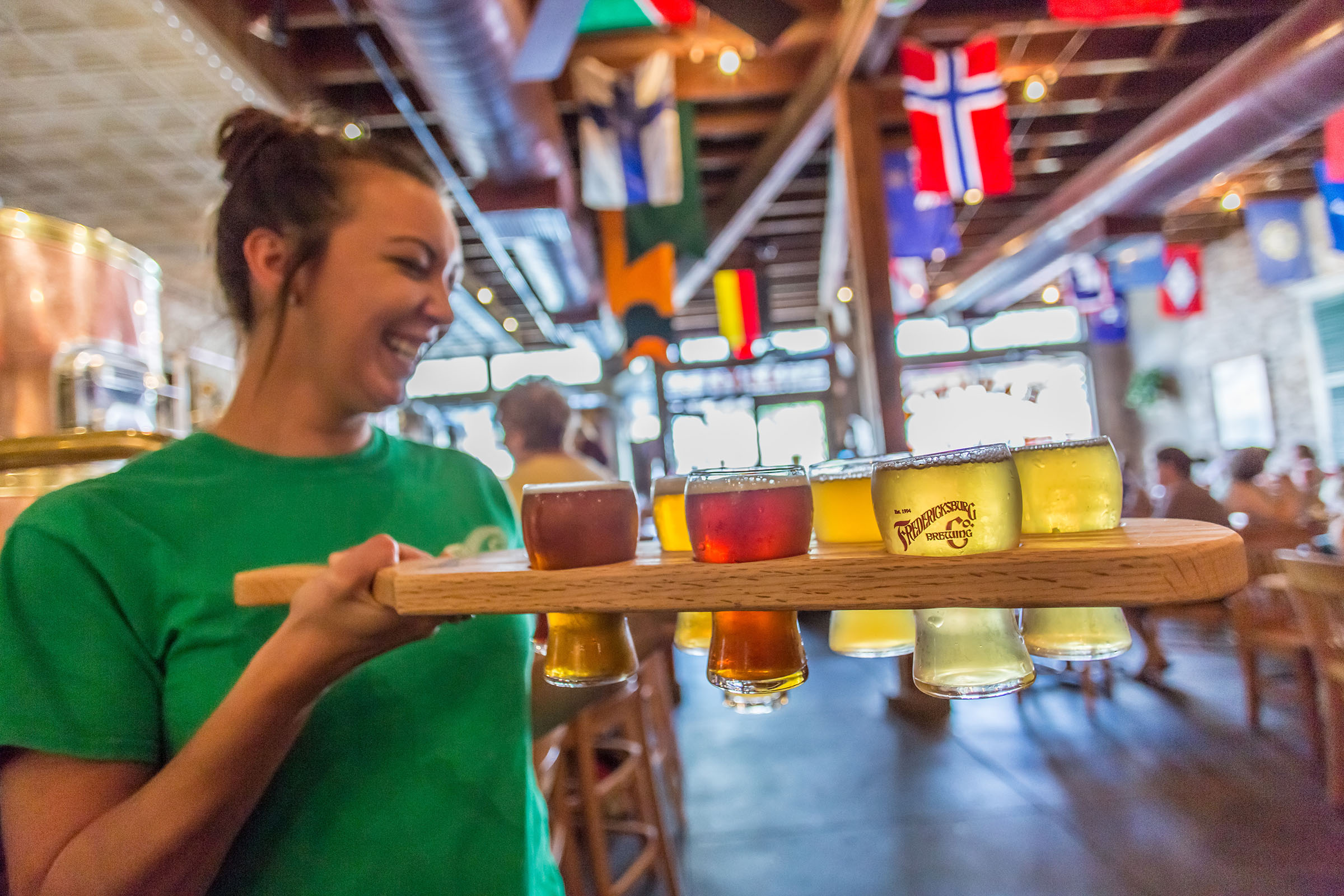 Fredericksburg Brewing Company, the oldest brewpub in Texas, began operations in 1994, just after the Texas Legislature gave its stamp of approval to beer making in the Lone Star State.

Today it brews about two dozen different styles in a restored 1890s-era building on Main Street, with five to eight varieties on tap at any given time. Among the more popular? The Not So Dumb Blonde Ale, the Enchanted Rock Red Ale, and the Pioneer Porter. There’s food, too—German specialties like schnitzel and sausage, along with Texas standards like chicken-fried steak.

“Back in the early days, guys would come in and say, ‘The wife’s shopping, I’m going to drink beer,’” says head brewer Rick Green.

In Hye, between the two towns, the husband-wife team of Travis and Cherry Graham established Hye Cider Company in 2017. The two former chefs make “cyser,” an apple cider that’s fermented with honey and tastes like a cross between mead and cider. The result is something that’s dry and a little higher in alcohol content than most cider.

“We have a passion for all things fermented,” Cherry Graham says.

The cidery serves five flagship flavors—Hye Stylin’, which is dry, light and crisp like champagne; Hye Note, an apple forward version that’s the most cider-like in the lineup; Hye Bay, infused with bay leaves; Hye Hops, made with whole flower Willamette hops; and Hye Heaven, a sweet spin on the drink that’s made with Turkish figs, toasted peppercorns, and wildflower honey.

Visitors can sample them all in the tasting barn, where the grille of a 1960 Cadillac adorns the front of the bar and a chandelier made from a drum set hangs from the ceiling. There are also picnic tables on the shaded grounds. A food truck serves tacos and live musicians perform on an outdoor stage.

The bottom line? Wine gets most of the attention, but the beer, cider, and mead are worth the trip, too.