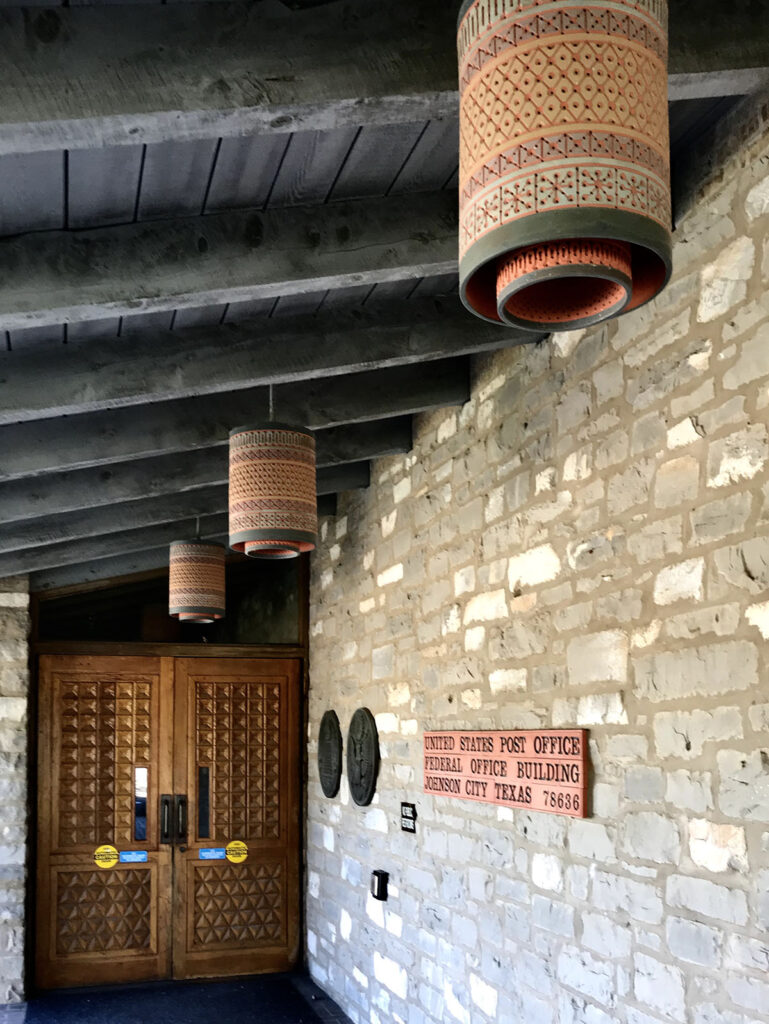 Mood Lighting fixtures at the post office in Johnson City designed by O’Neil Ford (his brother, Lynn, made the carved wood doors). Photo by Kathryn Jones.

As a student at Trinity University, I appreciated how the red-brick buildings, landmark bell tower, and unique lighting tied the campus together. By day, ceramic pendant lamps with geometric designs and colorful glazes lent an artisan touch to the simple lines of O’Neil Ford’s architecture. At night, sconces with scored lines and patterns of tiny holes cast patterns of light on brick walls and walkways.

Decades later, I learned who designed the distinctive pottery lights: artist Martha Mood. Born in California, Martha and her husband, a Texas-raised photographer named Beaumont Mood, moved to Dallas then resettled in San Antonio in the 1950s. The Witte Museum held a solo exhibition of her ceramic work in 1957. Martha met Ford during the show and began a professional collaboration with the pioneer of Texas modernism. Beaumont devised how to fabricate the lights so they could be produced more quickly than by hand but preserve their handcrafted look.

Their company, Beaumont Mood Lighting, made ceramic light fixtures, fountains, and other architectural features for Ford’s projects. They are abundant in San Antonio, where they hang at Trinity, at St. Mary’s Hall prep school, and even a Bill Miller barbecue restaurant.

“You can see the lights in many places in San Antonio,” says Kathryn O’Rourke, professor of art and art history at Trinity and editor of the 2019 book O’Neil Ford on Architecture. “They are a signature element of 1960s and 1970s buildings here, and absolutely character-defining.”

The architect “deeply respected artists and their work,” O’Rourke adds. “Ford believed passionately in craftsmanship; admiration for the Moods was in part an extension of this and…a way of helping make visible the values and priorities that shaped his architecture.”

The Moods’ fixtures also hang in the Ford-designed post office in Johnson City, as well as in private midcentury homes in San Antonio, Dallas, Denton, Austin and Houston, and at Texas Instruments’ Semiconductor Building in Dallas.

The pottery lights have become highly collectible—and pricey—as midcentury modern design surges in popularity and collectors learn about their history and importance. Mood fixtures periodically turn up at auctions and on online home décor sites, with prices ranging from $236 for a single fixture to $1,000 or more for a pair of pendant lamps.

Ted Allen, owner of Period Modern, a San Antonio midcentury modern furniture and lighting store, has a waiting list for the lights when they become available. “It always seemed to me these things were wonderful,” he says. “I didn’t understand why they weren’t valued more than they were, but now they are. Within the last year, they’ve taken off.”

“We’re shipping them to California and to people who have never seen them before,” Allen continues. When he posts the light fixtures on social media, “they’re gone within minutes,” he says. “People want them. There’s no shortage of them. They’re out there. They’re not rare. It’s just a matter of bringing them to market.”

Denton is another city with a large collection of Mood lighting. Installations include city hall, the public library, outside the municipal pool, and in midcentury modern homes.

Leslie Couture, assistant in the library’s special collections department who has researched the Moods’ lighting, says they have lasting appeal because they represent a time and place, but are also timeless. “They’re very organic looking—the texture, the colors, the fact that [many are] handmade,” Couture says. “For my generation, we grew up in households that had this style. I like the history behind them.”

The Moods eventually sold the lighting company (according to sources, a company still exists but no longer makes light fixtures). The couple divorced in 1966, and Martha moved outside of San Antonio to Helotes, where she concentrated on her stitchery art and tapestries for international patrons. She would remarry, but died of cancer in 1972. But the Moods artistry endures, lighting up Texas with vintage style—just look up and you’ll see it.

In the Mood: Places with Mood Lighting fixtures

City of Denton City Hall and Emily Fowler Central Library
Denton
215 E. McKinney St. and 502 Oakland St.
Pendant lamps hang in the lobby at City Hall and wall sconces are mounted in the inner courtyard. Globe-shaped lights hang from the south entrance pergola. Another large collection of pendants and sconces is in and around the Emily Fowler Library. Brightly glazed pendants hang along the municipal pool perimeter.