A Taste of Summer in Kemah 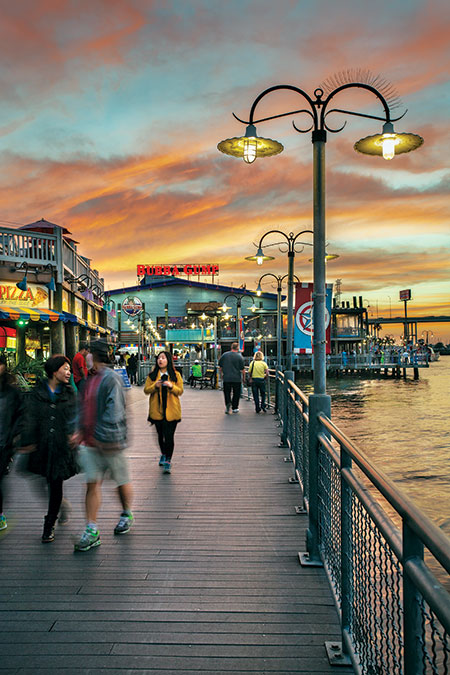 Summer is here. for me, there’s something about the longer days and warm nights that calls to mind childhood memories of whirling amusement rides and delicious theme-park fare.

Today, one of my all-time-favorite haunts for reliving those summertime indulgences is the Kemah Boardwalk—a 60-acre trifecta of fun, food, and excitement, just southeast of Houston. The salty Gulf breeze and postcard views of Galveston Bay set the scene for amusement rides, midway games, retail shops, and a variety of waterside restaurants and concession stands.

Following in the footsteps of some of America’s most iconic boardwalks, such as those at Coney Island and Atlantic City, the Kemah Boardwalk has all the nostalgic sights and sounds you’d expect from a year-round oceanside carnival. As you stroll along the wooden promenade, the distant click-clack of the Boardwalk Bullet roller coaster blends with screams of excitement and nearby laughter. Bellowing midway games, packed to the gills with giant stuffed animals and trinkets, offer carnival kitsch at every turn.

When it comes to food, the boardwalk is known for its themed restaurants and eclectic mix of cuisines. Nothing against the sit-down eateries, but at the boardwalk I usually want food with a little more get-up-and-go: something fried or on a stick, that doesn’t come with a salad or grilled vegetables on the side. And Kemah delivers.

On a recent trip to Kemah, my brother and I came not for the rides and restaurants, but for the food stands along the boardwalk, which tempted us with carnival classics like pizza, snow cones, soft pretzels, and smoked turkey legs.

In the shadow of the 65-foot Ferris wheel and with stomachs growling, we weighed our options. But before we could decide between chili-cheese fries, buffalo chicken empanadas, or a foot-long corn dog, we found ourselves at the head of the line and made a quick call: We’d try a north-to-south taste-test of New York-style hot dogs and Tex-Mex hot dogs.

With our portable entrées in hand, we sat down at a nearby umbrella-covered picnic table. Lacking adult supervision, we put our elbows up on the wood plank tabletop and stuffed our faces. The New York dog, with its tangy sauerkraut and undulating garnish of spicy mustard, certainly satisfied, but we declared the Tex-Mex dog the winner, smothered in yellow ballpark cheese and topped with mild peppers, tomatoes, onions, and cilantro. But the game wasn’t over yet.

Soon, a familiar aroma caught our attention amid the jumble of sweet and savory smells. It was the unmistakable aroma of deep-fried confectionery bliss, the delight known as the funnel cake.

As if the allure of fried batter dusted with powdered sugar wasn’t enough, at Kemah they’ve taken this carnival staple to new heights with a cherry à la mode version. “We call it the gourmet funnel cake,” says Jacob Bigger, a boardwalk security staffer who knows his way around fried pastries. And so we ordered one.

Normally, two manly men such as my brother and I would have devoured a funnel cake in less than a minute. However, this occasion was to be savored. After all, a cherry à la mode funnel cake is the kind of delicious guilty pleasure that can leave a grown man unconcerned when the cherry topping conspicuously dribbles down his chin. Scooping my plastic fork in for the first bite, my knees weakened. The tart cherry-pie filling and creamy vanilla ice-cream proved the perfect foil to the still-warm, crispy fried dough.

After our last bite, we lined up for a thrilling zipline ride on the boardwalk’s newest addition, the Iron Eagle, before calling it a day.