Curl Up in Cat Spring 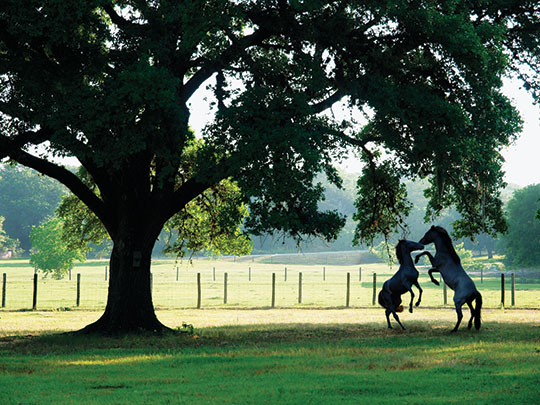 Cat Spring must have seemed like a dream come true for the German immigrants who settled the community in the 1830s.

Publicized in Central European newspapers for its bountiful game, fertile soil, and flowing creeks, the area drew settlers seeking prosperity and a fresh start in the new world. Cat Spring’s relative proximity to San Felipe—founded in 1824 as the unofficial capital of Stephen F. Austin’s new colony—made it a natural way station for incoming German and Czech immigrants. The same pastoral setting that attracted those early settlers continues to draw travelers to Cat Spring and surrounding Austin County, although these days most visitors are seeking a peaceful respite from the big city.

Travelers exiting Interstate 10 and making the roughly 10-mile drive north to Cat Spring are greeted by a landscape teeming with wildflowers—especially at this time of year—thick woodlands, and agricultural abundance. Agriculture in the area has changed since the early days, when farmers cultivated corn, tobacco, cotton, and livestock. Cattle and grass production dominate Austin County agriculture today, resulting in roadways lined by picturesque pastures and hayfields. And recent efforts by some area landowners to restore native prairie habitat are providing refuge for upland game birds and the endangered Attwater’s prairie chicken—as well as a glimpse into a bygone natural landscape.

Over the years, though, I’ve been drawn to Cat Spring by another relic of Texas’ past—the town’s 112-year-old community dance hall. As co-founder of Texas Dance Hall Preservation Inc., I’ve roamed across Texas seeking out historic dance halls and learning about the communities that sustain them. I recently returned to Cat Spring with a friend to check out the dance hall and experience more of the town’s offerings.

We begin our exploration of the unincorporated town (population 750) at Mustang Alley Antiques, which occupies a turn-of-the-20th-Century general store building that retains much of its historic character, including hardwood floors and an inviting front porch. Inside, we discover a variety of antiques and collectibles, cowhides, picture frames, and even organic paints. We pick up a local history book to read during our stay, and marvel at the historical photos displayed, including pictures of the dance hall.

Next we’re off to the Blisswood Bed and Breakfast, located on the 600-acre Lehmann Legacy Ranch. We take a tour of the B&B’s 11 antique homes, ranging from the one-bedroom writer’s cabin to the two-suite Dog Trot House and the four-bedroom Lehmann House.
But we keep our bags in the car because our digs for the night are two miles down the road at the Oasis Retreat, a sister property that’s also part of Lehmann Legacy Ranch. 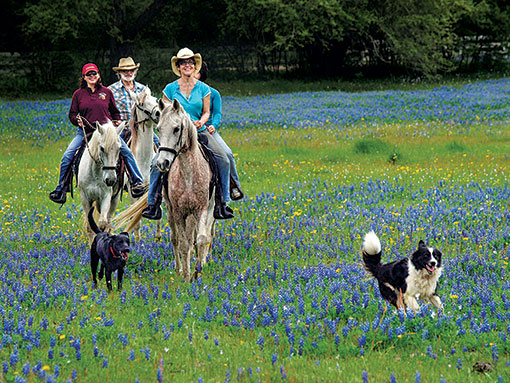 The Oasis is a collection of nine Asian-inspired cottages, suites, and rooms situated among towering pines, thick stands of bamboo, and greenhouses, which supply freshly cut flowers to the Oasis and Blisswood. We’re staying in the Cherry Blossom Suite, which offers Japanese décor and design elements, a full kitchen, a Jacuzzi, a covered porch, and an enclosed yard for pets.

After settling in, I venture out to explore the surrounding ranch. Nearby, I find the Conservatory, a Victorian wrought-iron greenhouse featuring an indoor swimming pool and tropical foliage. Skeeter Hagler, a professional photographer who became a resident of the ranch after he moved to Cat Spring in 2007, shows me around the rest of the property, including pastures housing Paso Fino horses (horseback riding is available), cattle, alpaca, miniature donkeys, bison, and blackbuck antelope. The ranch also features a manicured lake with an island pavilion that’s popular for weddings, fishing lakes stocked with bass, and a Border collie rescue area maintained by Carol Davis, who owns the property.

“Cat Spring is a town with more horses than people,” Skeeter reflects. “We always know a newcomer when they say Cat Springs instead of Cat Spring. The saying is ‘one cat, one spring.’”

As daylight wanes, our thoughts turn to dinner. We make our way just down the road to Carol Davis’ restaurant, Carol’s at Cat Spring, which reminds me of a Western lodge with its rough-hewn cedar walls and Western furnishings. The restaurant’s walls feature a selection of paintings by Ken Turner, an artist from nearby New Ulm, depicting such themes as Texas heroes and politicians. I order a steak, prepared on a flat-iron grill, seasoned and cooked to perfection. Dessert is just as exceptional: The sweet potato cake (not pie) is an outstanding surprise.

Carol’s, it turns out, is a lively place to be on a Friday night in this small community. During our visit, we accepted Carol’s offer to join her communal table, providing a chance to learn more about Cat Spring and some of the people who call the town home, such as Linda Griffin, a local novelist and former fashion editor
of the Houston Post, and Bob Schoelman, a former owner of the famed Esquire Ballroom in Houston. “Carol’s at Cat Spring was born out of a need to bring some city-type food into the country,” Carol says. “It is a lodge setting, with the outside belying what is inside. The community table is the highlight for many people, along with G Marie Schoelman, a country songwriter/singer who performs at least one night a week.” The interesting conversation carries on past closing, when we return to our lodging to rest up for Saturday.

After a good night’s sleep, the morning offers new opportunities for exploring the Cat Spring area. At the top of my list of things to see is the 1902 Cat Spring Agriculture Society Pavilion—Cat Spring Hall, for short—home of the Cat Spring Agricultural Society. The 158-year-old group is thought to be the oldest agricultural society in Texas. Joachim Hintz, a turn-of-the-century builder, crafted the 12-sided hall, as well as several others in the region; He’s credited with popularizing the “round hall” design. This hall has been a center of social life for generations, and to this day, it hosts dances and other activ-ities, including the annual Antiques and
Garden Show in September.

Next door to Cat Spring Hall, at the corner of Farm Roads 949 and 1094, is the Cross Road Tavern, a former gas station that now houses a convenience store and restaurant. The business is furnished with vintage bar stools, carries a few essential groceries, and attracts friendly locals who gather in the evenings to converse with friends over a cold barley pop. The Tavern has been serving the local community for generations and now boasts a hamburger grill that does a lively lunch business. The Tavern also hosts a popular Friday night Fish Fry.

Rolling across the gorgeous Austin County landscape, we decide to extend our Cat Spring visit by another day to enjoy more of the area’s offerings. There’s San Felipe de Austin State Historic Site, which marks the site of Austin’s old colonial capital, and a gallery of interesting small towns, including Coshatte, Millheim, Peters, Sealy, and Industry. As a devotee of historic dance halls, I’m intrigued that each of these towns has its own dance hall. Regardless of your interests, an abundance of history, natural beauty, and laid-back pleasures are waiting to be discovered just off of Interstate 10 in Cat Spring.