All Good in Arlington 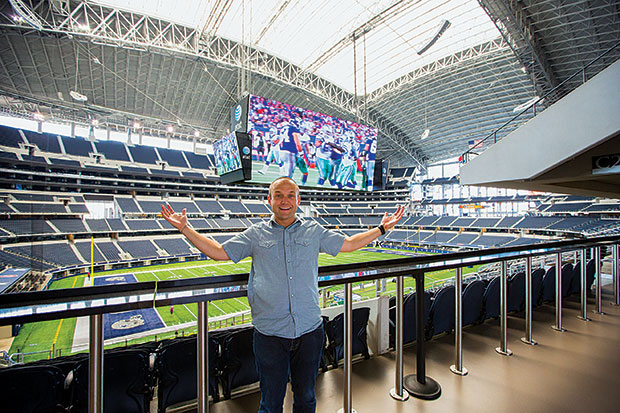 Many visit Arlington seeking the high-flying screams of a roller-coaster or the decibel-busting cheers of the home crowds. And while any reason to visit Arlington is a good one, there’s much more to this Metroplex midpoint than meets the eye.

8:30 a.m. To greet my day with a proper “howdy,” I headed to Rise and Shine, a quaint Arlington diner with a big menu selection, including dozens of omelet combinations and fresh biscuits that will make your eyes roll back in delight. After stuffing my belly on heaping portions of French toast and eggs, I was ready for a nap, but decided to press on.

10:00 a.m. Arlington is no stranger to exciting sports. To learn more about the city’s gaming past, I headed to Arlington Baptist College, which rests atop what used to be a covert speakeasy called Top O’ Hill Terrace. On a guided tour, I learned how gamblers used to sneak up from the basement via secret passages and into the tea garden, where police would find them enjoying nothing but a friendly soiree.

11:30 a.m. To see a more family-friendly side of Arlington’s sporting legacy, I drove to the International Bowling Hall of Fame and Museum. The world-class
outfit documents the history of bowling—from Egyptian tombs to modern bowling-ball manufacturing—and honors the men and women who have excelled in the sport.
I was amazed by the displays and eager to crush some pins of my own.

1:00 p.m. My choice for lunch was J. Gilligan’s Bar & Grill. This Texas pub with a little “luck of the Irish” serves up tasty classics along with their own name-sake invention, Irish Nachos, featuring potatoes (cottage fries) instead of tortilla chips beneath mounds of cheese, bacon, tomatoes, chives, onions, and jalapeños, with a side of sour cream. They were so delicious, “I-rish” I had room for seconds!

2:00 p.m. My next stop was AT&T Stadium, home of the Dallas Cowboys. While it was off-season for the team, it’s always open season at the stadium. I decided on a self-guided tour and found myself in the inner sanctum of this monster coliseum. From the locker rooms to the field, it was a transcendental experience, especially standing on the 50-yard line beneath the massive video board. Since I had brought my own football, I spent the next couple of hours tossing the pigskin with my buddies. If
the Cowboys score as many touchdowns as I did, they’re sure to win the Super Bowl.

4:00 p.m. After time inside, I needed to sweat it out on the mountain-bike trails of River Legacy Parks. It’s crazy to think of such excellent trails smack-dab in the middle of this bustling city. It was the perfect way to clear my mind and find some much needed solace along the Trinity River.

6:00 p.m. I headed for an ice-cold margarita at Mariano’s Mexican Restaurant, the folks credited with inventing the frozen margarita machine. While the original ma-chine (a modified soft-serve ice cream dispenser) is now in the Smithsonian, Mariano’s still serves them up cold as the perfect com-plement to their classic Tex-Mex dishes. I can’t remember a combo plate that paired more deliciously.

7:00 p.m. I stepped outside and could hear the faint cry of the crowds down the street at Globe Life Park. I followed my ears and found hundreds of Texas Rangers fanatics tailgating and migrating toward the stadium for the big game. On a whim, I grabbed a ticket and headed inside. Play ball!

After a box of Cracker Jacks and a few Ranger home runs, the game ended with Friday-night fireworks, and it was time to call it a day. There are lots of reasons to visit Arlington—on game day or just any day. So whether you follow my footsteps or forge your own path, I hope to see you on the road.