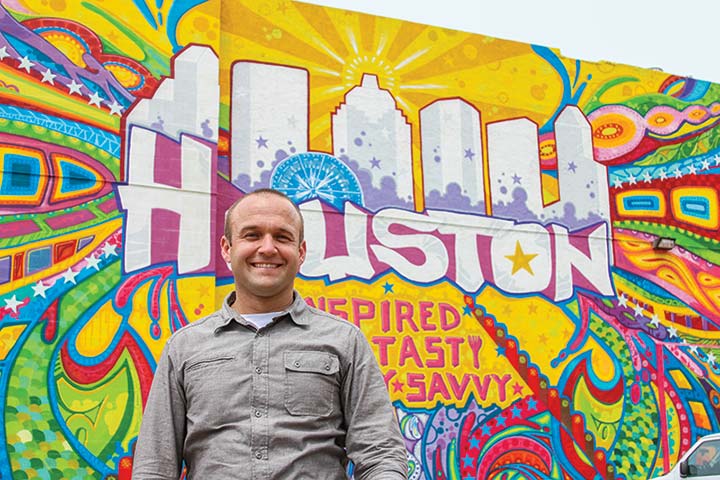 More than any other Texas city, Houston is defined by its neighborhoods, helping to break this giant bayou buffet up into bite-size (and day trip-size) chunks. From exotic to artsy and international to folksy, a trip to Houston can be anything you want it to be, including daytripper-ific!

9:00 a.m. I started my day at the popular the Breakfast Klub, south of downtown in Houston’s quickly changing Midtown District. But instead of dining with the likes of Molly Ringwald and Emilio Estevez from the classic ’80s film of the same name, my breakfast companions were a half-dozen fried chicken wings and a giant waffle. The food certainly fed my soul … and belly.

10:00 a.m. I headed just south to the Houston Museum District, comprised of 19 museums covering everything from Buffalo Soldiers to elephants to the body. Without time to visit them all, I decided to check out the Houston Museum of Natural Science, which covers more than my brain could learn in a lifetime, including paleontology, gems, energy, and wildlife. My favorites were the fighting dinosaur skeleton displays in the Morian Hall of Paleontology and the bone-chilling mummies in the Hall of Egypt.

1:00 p.m. After a few hours indoors, I stepped into the sunshine of Hermann Park, which has become Houston’s outdoor playground. I found my inner Zen among the trees and flowers of the Japanese Garden, and then I set it free rolling down the grassy knoll of Miller hill. I’m glad I did that before lunch.

1:30 p.m. To visit a third neighborhood, I headed up the road to the always-quirky Montrose District, composed of funky public art, unpredictable restaurants, and an overarching air of creativity. I popped into the packed Aladdin Mediterranean Cuisine for a warm plate of chicken shawarma, lamb, and hummus.

2:30 p.m. I set off to explore Montrose and found myself browsing racks of hipster clothing at Pavement, looking through bins of recycled clothing at Blackbird Trading Co., and finally considering some Houston Oilers memorabilia at Old Blue House Antique Shop. Sadly, the “Luv Ya Blue” T-shirt wasn’t my size.

4:00 p.m. As I drove around, I stumbled upon Houston’s famous Beer Can House, covered from top to bottom in aluminum beer cans and open for tours. Started in 1968 as the hobby of its late owner, this house has become iconic to Houston’s thriving art scene. It is inexplicably beautiful, in a very strange way.

5:00 p.m. For art of a different sort, I headed to the Menil Collection, one of Houston’s most stunning art museums, gifted to the city by the de Menil family and free to visitors. The surrealist sculptures made me feel like I was observing the world upside down, while the scale of modernist paintings made me feel two feet tall. I may not understand it all, but it sure was fun to view.

7:00 p.m. Still thirsty from exploring the Beer Can House, I headed to the heart of Montrose for dinner at The Hay Merchant, a local craft beer bar and gastro-pub. If it wasn’t difficult enough choosing from its numerous brews (75 taps and five cask engines), each tap handle features an item collected by owner Kevin Floyd—including a hand grenade, knife, fleur de lis, and mini-handmixer—with the brews listed on a blackboard hanging above. It took some effort, but I eventually found myself with a local brew from Saint Arnold and a very tasty Cajun meat pie.

As I sat among the chatter of the local Houstonians, this big city suddenly felt very small, and it struck me how exciting and interesting Houston has become. It truly is a city that’s all things to all people, and for me it was one incredible day trip. So whether you follow my footsteps or forge your own path, I hope to see you on the road.