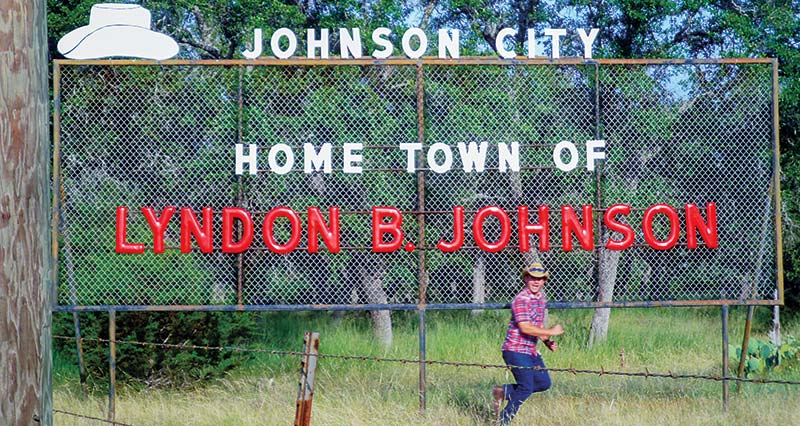 Texas is synonymous with big, partly because of its land mass, but also because of its big personalities. And through the ages, few have been bigger than Lyndon B. Johnson, the 36th President of the United States.

I tripped to his Hill Country home to follow in the footsteps of this Texas legend.

9:00 a.m. My first stop was the Lyndon B. Johnson National Historical Park, broken up into three different areas with the Johnson Settlement and Boyhood Home right in the middle of Johnson City. The first thing I learned was that the city isn’t named for LBJ, but rather a family member who helped establish the town in the late 1800s. I roamed the open paths of the Johnson Settlement, peering into the log cabin that hearkens back to the days when LBJ’s grandfather ran cattle up the Chisholm Trail.

10:00 a.m. I walked over to LBJ’s Boyhood Home, a quaint, one-story house on a site occupying an entire block with its yard, barn, and windmill. The half-dozen interior rooms told the story of a young LBJ playing baseball and getting into mischief, but also showing his early political interests; he often hid under the floorboards to eavesdrop on his father’s political discussions and debated current events at the dinner table.

11:30 a.m. The Hill Country Cupboard boasts the “world’s best chicken fried steak, nearly 3 dozen sold.”  Who could resist such a claim?  My “chicken-fried” was crispy and juicy with the mashed potatoes and fried okra serving as perfect sidekicks.

12:30 a.m. I drove west to nearby Stonewall for the main attraction of the National Park—the LBJ Ranch. I picked up an audio CD at the visitors center and set off on a driving tour of the ranch. While LBJ was president, countless dignitaries and heads of state visited the ranch, often getting personal tours from the front seat of LBJ’s convertible Lincoln. We passed the ranch’s cattle operations, private airstrip, and LBJ’s final resting place under the shade of beautiful oaks near the Pedernales River. The tour concluded inside LBJ’s home, dubbed the “Texas White House,” where the park ranger shared stories of Lyndon and Lady Bird’s life at the ranch, hosting dinners in the wallpapered dining room and holding cabinet meetings on the lawn.

2:30 a.m. At the adjoining state park, I stopped at the Sauer-Beckmann Farmstead, a refurnished 1915 homestead where life goes on much like it did at the turn of the century. Cows get milked, pigs get slopped, and butter gets churned, all while visitors like me look on befuddled that folks actually lived that way.

3:30 a.m. For a meatier throwback, I headed to Whittington’s Jerky, which has been smoking daytrip-ready meat sticks for more than 50 years. I filled up on samples of beef, turkey, and pork jerky in various varieties from mild to tear-jerker spicy, then grabbed a pouch of garlic beef jerky to stock up for my upcoming hike.

4:30 a.m. I headed to Pedernales Falls State Park, a rustic wilderness situated on the river where the water cascades over a series of limestone shelves as it drops into sky-blue pools. Because of the flash-flood risk, there’s no swimming on the falls, but downriver I found a quiet stretch of water and basked in the sun until it faded away behind the tall oaks and cypress trees.

7:00 a.m. Back in town, I stopped at Pecan Street Brewing, across from the stately Blanco County Courthouse. I moseyed up to a pint of “1897 Jailbreak IPA” (offered occasionally), which recalls the old stone jailhouse next door. My lamb burger topped with whipped feta and pepperoncinis was far from ordinary, and close to incredible.

As I reflected on the day, it became clear that Johnson City is not only home to big personalities, but also big tales, big appetites, and big adventures. So, whether you follow my footsteps or forge your own path, I hope to see you on the road.