A Day in LBK 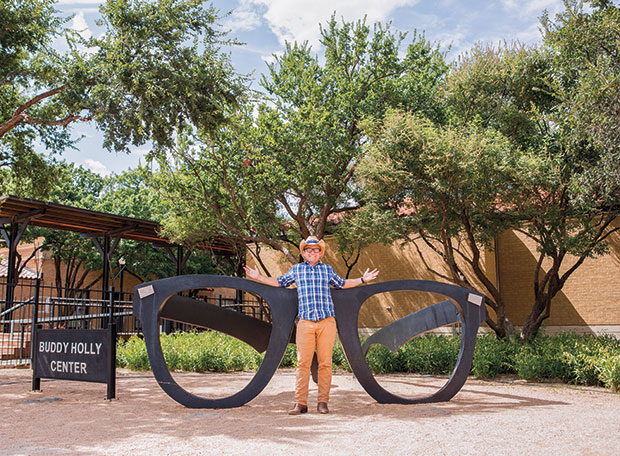 Lubbock earned its nickname as the “Hub City” by being the center of activity for generations of Texans living in and passing through the Panhandle. To this day, the city remains vibrant with life, art, and food, all of which I was ready to experience on my own trip to “LBK.”

Chet Garner is the host of The Daytripper® travel show on PBS; thedaytripper.com.

8:30 a.m. While Lubbock’s population pushes 250,000, there’s a smaller town
within the city where a furrier population dwells. It’s the famed Prairie Dog Town of Mackenzie Park, where dozens of prairie dogs go about their daily lives, uninterrupted by human onlookers like me.

9:00 a.m. I stopped at the Cast Iron Grill for a burrito so big it looked like it could feed an entire human city. However, the eggs, bacon, sausage, ham, vegetables, and homemade salsa were so good that I took care of it myself.

10:00 a.m. While musicians abound in Lubbock, none has been more influential than Buddy Holly. I said “howdy” to his statue beside the West Texas Walk of Fame and then stepped into the Buddy Holly Center, which not only pays tribute to the native son, but also includes a gallery with rotating art and music exhibits. It was awesome to learn about Holly’s first band, The Crickets, and to see artifacts from his childhood and rise to fame. The most sobering item was his last pair of black-rimmed glasses, recovered from the fateful 1959 plane crash on “The Day the Music Died.”

12:00 p.m. At Texas Tech University, you don’t have to be a Red Raider to appreciate the campus’ Spanish architecture and iconic landmarks, such as the statue of Will Rogers atop his trusty horse Soapsuds, or the chunk of the Irish Blarney Stone, which supposedly gifts eloquent speech to all who kiss it.

1:00 p.m. On a quest for the “Tech Experience,” I found myself at Spanky’s, a restaurant that has been filling students’ bellies for more than 30 years with its signature fried-cheese sticks and burgers. My order came out piping hot with the melted cheese stretching as far as my arms could reach.

2:00 p.m. For a trip in time, I headed to Lubbock Lake Landmark, which is both a field laboratory and visitor destination, to explore the history of the people and animals that have inhabited this region for at least 12,000 years. With the trail system and life-size bronze sculptures, I could imagine a day when mammoths, camels, and bison lived side by side with early Clovis people. The only thing missing was water.

4:00 p.m.. For that, I headed east to Buffalo Springs Lake. While Lubbock has the reputation of being flat, a short drive put me in Yellowhouse Canyon, where a spring-fed lake and caliche cliffs changed my perception forever. I quickly joined the locals on one of the lake’s sandy beaches and spent the next few hours basking in the Texas heat.

7:00 p.m. As the sun began to drop in the sky, I decided to polish off the day at the Stars & Stripes Drive-In Theatre. I parked my car in front of the giant outdoor screen as those around me set out lawn chairs and blankets. At the on-site 50’s Cafe, I ordered popcorn, soda, and a Chihuahua Sandwich made famous by the Sky-Vue Drive-In in Lamesa and now served by the same family here in Lubbock. This “sandwich,” comprised of chili, pimento cheese, and cabbage between two crispy corn tortillas, became an instant classic in my mouth. Ay Chihuahua!

The sky exploded with color as the sun set over the Texas prairie. Soon, the glow of the screen became our predominant light. And while movies are usually a means to escape reality, at that moment there was no place I would rather be than sitting under the stars on the High Plains of
Lubbock. So, whether you follow my footsteps or forge your own path, I hope to see you on the road.