Chet Garner goes on a discovery mission in Port Lavaca 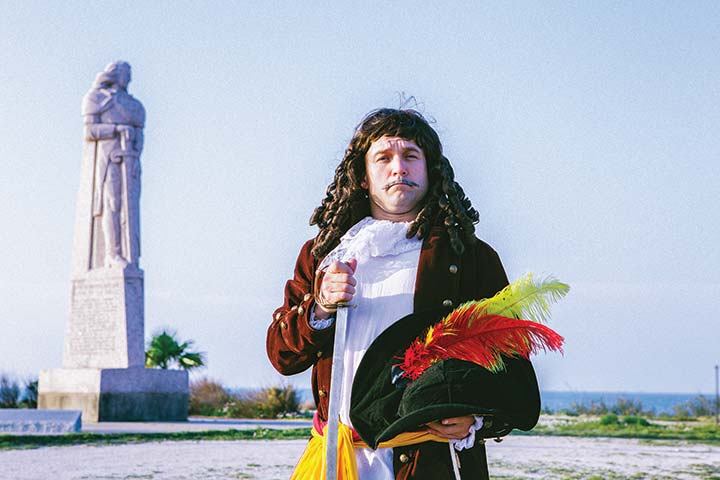 Port Lavaca lies on a stretch of the Texas coast between Galveston and Corpus Christi that often gets overlooked by travelers seeking refuge in the salty sea breezes.

While “la vaca” means “the cow” in Spanish, to me, the region translates to some of the best food, history, and adventure Texas has to offer.

9:00 a.m. I crossed the Lavaca Bay Causeway bridge, surrounded by waters that stretch to the horizon. This local inlet is an offshoot of massive Matagorda Bay, connecting it to the Gulf of Mexico. And while Port Lavaca isn’t technically on the Gulf, the tall palm trees and beachy colors of many businesses and homes made me feel otherwise.

10:00 a.m. I stopped to explore the Halfmoon Reef Lighthouse, which used to reside in the middle of the bay, but now sits on solid ground outside the Port Lavaca Chamber of Commerce. This small, two-story hexagon was built in the 1850s and guided ships through the bay until the 1940s. The first floor is filled with historic pictures from when the light-keeper and his family lived in the structure, surrounded by water and isolated from the world.

11:00 a.m. Across the street, I found myself atop a 2,200-foot-long boardwalk, which hovers above the Lighthouse Beach and Bird Sanctuary. Here, some 400 species can be seen at various times throughout the year, and from the Alcoa Birding Tower I counted almost a dozen on my own, including egrets and pelicans. The boardwalk concluded at Lighthouse Beach, where I kicked off my shoes and waded through the brackish-but-blue waters.

12:30 p.m. Next I headed to Main Street. While it’s clear that the years and multiple hurricanes haven’t been friendly to some of the historic buildings, many were in great shape, such as the restored Port Lavaca Main Street Theatre, whose neon marquee and colorful murals harken back to the golden age of this downtown district. I stepped into The Green Iguana Grill and scarfed down a delicious grilled chicken-salad sandwich while surrounded by vintage relics and ’80s memorabilia on the walls.

1:30 p.m. I headed to the Calhoun County Museum and perused artifacts from about every era of Texas history. There were native spear points, French shoes recovered from the La Belle shipwreck, and a six-foot-tall Fresnel lens that once sat atop the Matagorda Island Lighthouse.

3:30 p.m. Driving south along the edge of Matagorda Bay, I stopped at the La Salle Monument, which marks the spot where in 1685, French explorer René-Robert Cavelier, Sieur de La Salle, set foot in today’s Texas, claiming it for France. La Salle established Fort St. Louis but was eventually murdered by his own men, one of the reasons we don’t speak French today.

4:00 p.m. Traveling farther down the coast, I arrived at Indianola, once the largest port city in Texas but now reduced to a quaint fishing community. At its peak in the 1870s, Indianola had more than 5,000 residents, but after two devastating hurricanes and a fire, the town was all but abandoned. Looking out into the bay, I could make out the faint shadow of the old courthouse foundation and could just imagine bustling streets filled with merchants, sailors, and immigrants.

6:00 p.m. For centuries the bay has sustained life with its bountiful waters. And with the spin of modern chefs, the seafood now tastes better than ever, especially at Art’s Fish House. I ordered a “Big Pot” of boiled shrimp, blue crab, and Dungeness crab, add-ed crawfish, then spent the next hour peeling shells and sucking heads. Ayeee, it was good.

As the butter dripped down my fingers and the spicy Cajun seasonings burned on my lips, I thought, if Port Lavaca can hold such delicious food and history, what else might be hiding on the Texas coast? I immediately grabbed a map and started planning my next salty adventure. So whether you follow my footsteps or forge your own path, I hope to see you on the road.