Havin’ a Ball in Tomball! 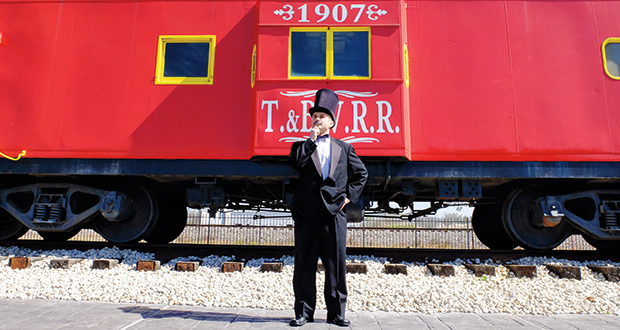 Just north of Houston sits a town that’s hidden in the shadows of its mega-metropolis neighbor. And while Tomball is rapidly growing, trippers looking for an off-the-beaten-path adventure will find hidden among the urban development a small town that’s full of history, food, and sweet Texas tunes.

9:30 a.m. Almost as soon as I exited the busy highway, I found myself cruising Tomball’s quaint Main Street marked by colorful storefronts and vintage street lamps. I walked among the little shops selling goods of every kind, both new and old. From Granny’s Korner to Relics by the Railroad, I counted almost a dozen antiques shops in as many blocks.

10:30 a.m. Down the street I discovered the renovated 1907 Railroad Depot, home of a small museum dedicated to the history of the railroad and how it put Tomball on the map. Come to find out, this rural farm community was known as Peck until 1907, when residents decided to rename their town “Tomball” after Thomas Henry Ball, who brought the railroad to town.
The restored waiting area, Morse code machine, and caboose gave me new insight into this lost era.

11:30 a.m. To learn even more about Tomball’s past, I cruised to the Tomball Museum Center, a collection of historic buildings, including a church, log cabin, barn, and farmhouse. My favorite was the Oil Camp House, which in the 1930s housed roughnecks during Tomball’s oil boom.

1:00 a.m. Ready for lunch with a historical flair, I headed to the Whistle Stop Tea Room, which serves Texas-size sandwiches, soups, and desserts. My chicken sandwich with avocado and jalapeño pimento cheese certainly hit the spot. While I didn’t think I had room for dessert, I managed to squeeze in a taste of delicious croissant bread pudding.

2:15 p.m. To spend some time outdoors, I visited the Kleb Woods Nature Preserve. I felt insulated from the bustling world around me as I trekked through this mystical and serene park filled with over a hundred acres of cedar, oak, and pine trees. Most curious was the home of the late Elmer Kleb, who managed to live free of electricity on this land until the 1990s. What a perfect retreat!

4:00 p.m. I drove a short distance through the countryside to New Kentucky Park, located a few miles outside of town. While this park is small, its historical markers memorialize a big moment in the Texas Revolution known as the “fork in the road.” At this location, General Sam Houston and the Texas Army faced a critical decision between turning left to follow the path to safety in Louisiana or turning right to face Santa Anna’s army head-on. Well, Sam took a right, and the rest is history!

5:30 p.m. After a long day of exploring, I was ready to relax, so I headed to Mel’s Country Cafe, where the line was already stretching out the door. I had plenty of time to survey the plates of homemade country cooking but couldn’t pass up the “Mega Mel,” a behemoth burger towering over a foot tall. Patrons who finish the burger within two hours get their names on the wall and immortal fame. I puffed out my chest and put in my order. About 30 minutes later, and less than half-way through, I was so full I thought burger was going to start squeezing from my eyes. Needless to say, I did not make the wall.

7:00 a.m. I wasn’t ready to call it a day, so I wandered back to Main Street and joined the crowd gathering at Main Street Crossing, an intimate “listening room” with a laid-back feel that draws big-name musical acts. I grabbed a cold beer and found a table as the band took the stage. I toasted with the locals as the band told stories and played tunes as sweet as Texas. After a day like this, I understand why they say, “Tomball is Texan for Fun.” So whether you follow my footsteps or forge your own path, I hope to see you on the road.