Swingin’ By on Turkey Time 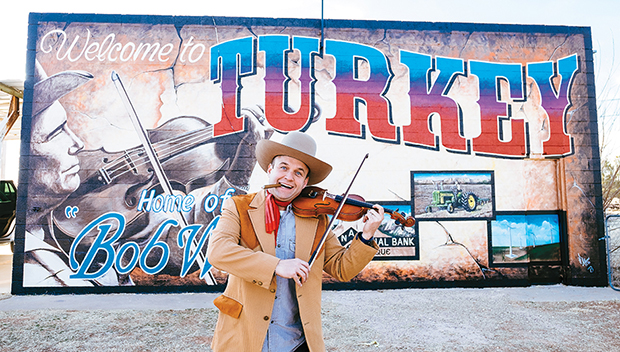 Tucked away in the Texas Panhandle is a town that exists on its own time. It’s a place where bison herds still roam freely, ancient canyons feel untouched by human hands, and “urbanization” is just a fancy word in the dictionary with no application to real life. To slow down my own pace, I saddled my modern wagon of steel and headed off for some time in Turkey.

Chet Garner is the host of The Daytripper® travel show on PBS. To view the Turkey
episode visit thedaytripper.com

9:00 a.m.: While the town streets felt sleepy, I found plenty of bright-eyed locals grabbing breakfast at Galvan’s, a Mexican-American institution. I grabbed a seat next to John Wayne’s portrait and proceeded to devour my delicious plate of huevos rancheros. Stuffed to the hilt, I wobbled toward the door until the heavenly smell of fried pies stopped me in my tracks. I had no choice but to grab a few to go.

10:00 a.m.: Next stop was the Bob Wills Museum, where I learned about “The King of Western Swing.” Wills was raised in Turkey, and his memory still attracts thousands of visitors to the annual Bob Wills Day festival, held the last Saturday in April. His talent forged a new genre and changed popular music forever.

11:30 a.m.: Cruising the town with my new Bob Wills CD on the stereo, I spotted a giant arrow sticking out of the ground. I decided to pull over and investigate. Turns out these 22-foot tall arrows are a part of the Quanah Parker Trail, marking important areas to the history of the Comanches. There are more than 80 arrows spread across the Panhandle, and the one in Turkey City Park memorializes the deep Comanche connections in Hall County.

Noon: To learn more, I cruised 10 miles down the road to the town of Quitaque (pronounced “Kitty-kway”) and headed to the Comanchero Canyons Museum. Inside I found a treasure trove of items unearthed by a few dedicated locals using metal detectors. The discovery of a few of these priceless items has literally changed the history books by pinpointing the exact locations of conflicts between settlers and Native Americans.

1:00 p.m.: In the distance, the mountainous canyons beckoned me to explore, but first I needed some fuel for the journey. I joined the crowd forming at Caprock Cafe and felt right at home.
I ordered a “Down & Dirty” fried-chicken sandwich topped with habanero garlic sauce, and it was just hot enough to kick me into gear for the rest of the afternoon.

2:00 p.m.: I ventured on to the majestic Caprock Canyons State Park & Trailway, where breathtaking formations of red and orange rock stretched as far as I could see. As I hiked through the park, my amazement turned to terror when I came face to face with a wild bison grazing on the trail. Luckily he paid me no attention, and I hiked right past this member of the official Texas State Bison Herd.

4:00 p.m.: I was inspired to ride the range like a true cowboy, so I met up with Tomas Hinojosa of Quitaque Riding Stables and hopped on a horse named “Mr. T.” We gazed upon amazing vistas I never would have found on my own. With no signs of human habitation anywhere, I almost expected a group of Comanches to ride over the hills at any point.

6:00 p.m.: All that horsin’ around made me hungry, so I headed to Hotel Turkey, which has been offering its brand of hometown hospitality since 1927. These days it’s also an excellent restaurant and watering hole where locals gather to relax, listen to live music, and enjoy some unbeatable home cooking. After toasting with the couple at the next table, I took a bite of my hefty bison burger and thought, “What a day!”

As the crowd stomped its feet to the swing music, I escaped to the porch and watched the sun set over the plains. This town is truly from another era, and I hope it never changes. So whether you follow my footsteps or forge your own path, I hope to see you on the road.