Get Into the Holiday Spirit at SeaWorld San Antonio 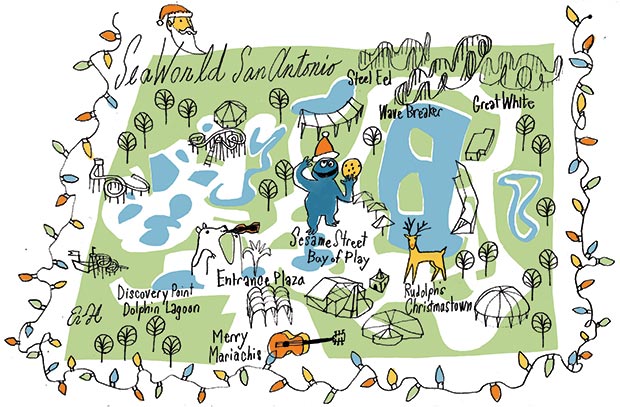 Facebook friends from back home in Michigan start posting photos of white-capped trees and front porches that look straight off the set of It’s a Wonderful Life, and I get a little wistful dreaming of the white Christmas that may never come to Austin.

Still, my husband, two young sons, and I seek out the holiday lights and festivities that bring the warmth of the holiday season, even though the chill isn’t there to buffer against it. We were pleasantly surprised to find this sometimes-elusive holiday magic last year at SeaWorld San Antonio.

SeaWorld’s Christmas celebration boasts 8 million lights, the largest display of its kind in Texas, and one that takes nearly all year to install. It’s a dazzling effect, from the red-and-white trimmed forest of “Coca-Cola Lane”—inhabited by giant inflatable polar bears—to the blue and white lights near Shamu Theater.

When we entered the park, the first photo op of many greets us: three shimmering blue Christmas trees framed by a palm tree backdrop. 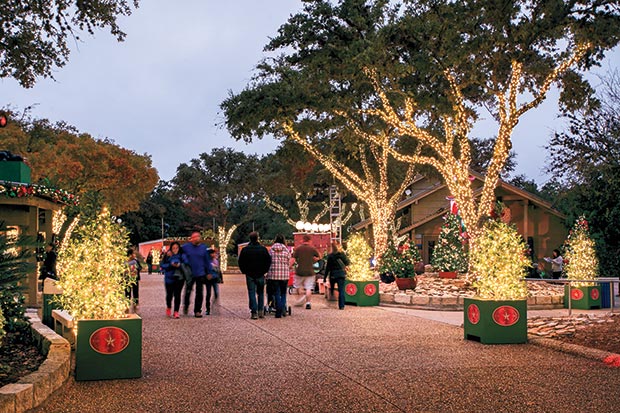 Directly inside the park, the Reflections stage glows in bright purple and blue hues after dark. Throughout the day, visitors can catch the Merry Mariachis, decked out in velvet red-and-white trimmed costumes and red sombreros, performing traditional holiday tunes with a San Antonian flavor.

“It’s a complete park transformation,” says Sharon Aguillen, vice president of entertainment at SeaWorld San Antonio. “If you’ve come in the spring or summer, it’s completely different to come during the Christmas season. It’s so immersive. Families have made it a tradition; every year, they might get their family photo in front of a certain backdrop.”

Our first stop is to pick up some light-up necklace souvenirs so that we are appropriately festive. Savings strategy: Dress in holiday gear from home so you fit in with the crowd.

After a short walk, we see a brightly colored play structure with flags bearing the faces of Elmo and Cookie Monster, the Sesame Street Bay of Play. SeaWorld has licensed the Sesame Street characters for several years, but as this was my first visit since I was a kid, I was impressed by the fact that my children could rub elbows with Oscar the Grouch (who’s stationed near trees trimmed with trash to celebrate the season) and Abby Cadabby (or as my 2-year-old calls her, “Abadee”).

Throughout the day, we stopped by for a few of the scheduled holiday-themed performances at the outdoor stage here, as well as photo opportunities. My youngest loved dancing and clapping along to his favorite Christmas songs.

In this area, there are several Sesame Street-themed attractions, including a carousel, a splash pad, a giant climbing structure of nets and tubes to get happily lost in, a smaller playscape for younger kids, and additional rides. 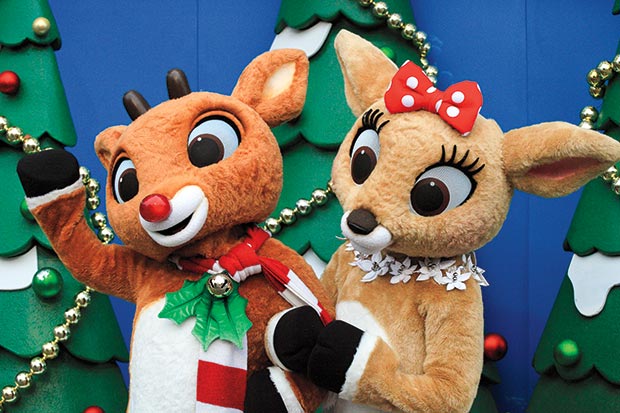 Rudolph and his friend Clarice from "Rudolph the Red-Nosed Reindeer" in Christmas Town.

Other familiar characters await around the bend at Rudolph’s Christmas Town. Last year was the first of a three-year licensing deal for SeaWorld to host characters from the beloved holiday classic, Rudolph the Red-Nosed Reindeer. Elfish cast members wished us a “Merry Christmas” as we walked through the area, with numerous cutout photo backdrops lining the path.

Photo opportunities abound here (professional park photographers are at each station, but they’ll let you use your own camera, too—and you can hand over your phone to a park employee so you don’t have to attempt a family selfie). You might be joined by Rudolph and his friend Clarice, or by Bumble the Abominable Snow Monster and prospector Yukon Cornelius.

For a special treat, sign up in advance to have dinner and a private meet-and-greet with these characters ($34 for adults; $17 for children 3 to 9). We enjoyed our dinner, a low-key buffet with lots of kid-friendly favorites located in an outbuilding decorated with twinkling floor-to-ceiling lights. As diners left their tables to take photos with the characters, my youngest hid between my legs to avoid the snow monster. Later, we laughed as he doggedly kept trying to honk Rudolph’s glowing nose.

If you go deeper into Christmas Town through a tunnel of lights, which periodically “snows” and includes regular light-and-music shows, you’ll find a Christmas market. The kids can meet Santa and one of his reindeer here and listen to live music throughout the day. The darker it gets, the more magical it feels.

“We have a mailbox in front of Santa’s workshop so kids can bring letters to Santa,” Aguillen says. “At the end of the event, I’ll review the letters, and of course the ones that really touch your heart are the ones where the parents are in the military so the child is asking for their mom or dad to be back home for Christmas time.”

Nationally, SeaWorld is phasing out its controversial orca productions in favor of more conservation-minded learning experiences for visitors. In 2019, the San Antonio park will end those shows.

Until then, visitors can see Shamu Christmas: Miracles, an indoor stadium show featuring the resident killer whales flipping, waving, and splashing, all choreographed with holiday music performed live by musicians and singers.

As impressive as that show is, my kids also loved A Pets Ahoy Christmas, locat-ed near the Sesame Street Bay of Play. It’s a show performed by trained dogs, cats, birds, and even pigs and a skunk—many of them rescue animals—that will have even the adults chuckling. As my 7-year-old watched cats climb across tightropes and dogs pilot a small car, he kept asking, “Are they real?”

You can find a daily calendar of events at the main entrance, which lists the productions throughout the day. Last year, additional shows elsewhere in the park featured dolphins, sea lions, and beluga whales.

For a more active adventure, I strapped in for the park’s newest ride, the Wave Breaker Rescue Coaster. The attraction encourages riders to imagine they are on a rescue mission to save a sea turtle or other endangered animal, and it pumps up the adrenaline by hurtling passengers toward a small pond on a series of steep hills. That roller coaster joins several others—including the Steel Eel, The Great White, and Shamu Express—for thrill-seekers big and small.

Discovery Point, which includes Dolphin Lagoon, offers an opportunity to swim with dolphins. For $125, guests age 6 years and older can reserve a 30-minute encounter. Wetsuits and towels are provided by SeaWorld. We liked checking out the Explorer’s Reef aquarium here, where the boys could get up close to the floor-to-ceiling tanks and watch the nurse sharks glide around the man-made reefs.

On the evening of our visit, the slight chill in the air almost reminded me of a typical winter night in Michigan. We grabbed two cups of hot cocoa to share between the four of us (if you ask for whipped cream, the vendors sandwich the cocoa between cream on top and bottom so it’s just the right temperature for sipping).

For a brief moment, with the lights twinkling on the trees lighting our path and our boys giggling their way through “Jingle Bells,” we were transported back home for the holidays once again.