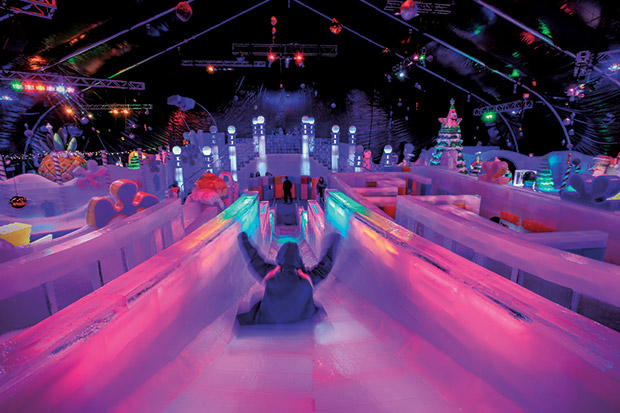 On a chilly December evening, the streets of Galveston’s historic Strand District are eerily still as a slow-moving fog rolls in off the harbor. Many of downtown’s touristy storefronts and busy-by-day eateries are closed at this hour. Yet, where we’re headed, the evening is just getting started. 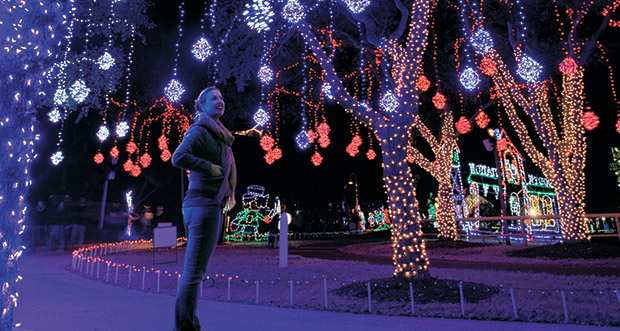 As we wander up the sidewalk, the distant clip-clop of a horse’s hooves pierces the stillness, resonating off rows of 19th-Century brick- and iron-front buildings that flank the streets. The ghostly echo peaks as one of Galveston’s famous horse-drawn carriages rounds a corner, lit by the soft orb of an amber street lamp.

Amid the fog and ornate Victorian buildings, it’s like stepping into a Charles Dickens story. One could imagine the candle flickering in old Scrooge and Marley’s counting house in Victorian London. It’s fitting then that my wife and I are on our way to a performance of A Christmas Carol at The Grand 1894 Opera House, just a few blocks away.

Nearing the theater, the quiet gives way to cheerful chatter. Friends, families, and couples—many dressed in their holiday red and green colors—congregate along the sidewalk, waiting to shuffle inside.

Partially obscured by the fog, the imposing, four-story theater building encompasses a quarter of a city block. The subtle red-brick and terra-cotta accents of the upper floors (formerly the Hotel Grand, now offices and apartments) are offset by an inviting arched entry of beautifully carved limestone.

After getting our tickets, we move up a set of stairs and inside. The lobby doors open to reveal a boisterous crowd inside a warm and elegant foyer. Christmas wreaths hang under old-fashioned brass wall sconces and a striking statue of a female figure holds an illuminated torch, adorning the nautically themed railing and balusters of the main staircase.

Entering into the theater itself, the expansive interior and Victorian opulence resonate with its “Grand” nomenclature. Blue velvet seats fan out across lavish patterned carpet, while red velvet curtains frame opera boxes stacked three-high along the front walls. Painted ribbons and abundant floral patterns adorn the ceilings and walls.

We settle in to enjoy the show, seated mezzanine stage right. To our surprise, a layer of fog rolls across the stage, spilling onto the auditorium floor. However, this time, it’s from fog machines.

As the audience quiets, Maureen M. Patton, executive director of The Grand, walks on to the stage and proclaims, “It’s a foggy night in London,” and the show begins. A lively cast of actors entertains with a lighthearted telling of the Dickens’ classic 1843 tale with modern technical twists such as a digital projection backdrop that changes with the scenes. After the curtain call and a standing ovation, Producer/Director Scott H. Severance (who also played Ebenezer Scrooge) engages the audience to sing “We Wish You a Merry Christmas.” By mid-song, nearly every person
in the 1,040-seat theater is singing along. What a perfect way to kick off a holiday weekend!

A Dickens of a Day

The next morning, we head out to Dickens on The Strand—Galveston’s jovial holiday celebration and street festival, sponsored by Galveston Historical Foundation.

Now in its 42nd year, the annual event (which takes place the first weekend in December) has evolved from a potluck supper in 1974 to a world-famous festival hosting 30,000 attendees in one weekend.

Folks in Victorian garb enliven the Dickensian scene from vendors, volunteers, and performers to festival attendees (who get half-price admission for wearing a Victorian costume). Ladies saunter about in lacy bustle dresses with feather-trimmed bonnets and carry parasols. Gentlemen stroll in suits and top hats. Shopkeepers, working-class folks, and dirt-smudged panhandlers don plain white shirts and wool caps. Even the Ghosts of Christmas Past and Christmas Future mingle among the crowds, posing for photos.

Making our way through the festival, we pause to revel in performances from magicians, jugglers, musicians, fire-eaters, and falconers. The aroma of festival fare abounds as vendors offer everything from classic funnel cakes and sausage-on-a-stick to wassail and Scotch eggs. Costumed peddlers offer a variety of Victorian-inspired wares, including jewelry and crafts, for souvenirs and gifts.

The star attraction of the festival is the always-entertaining Queen’s Parade, which happens at 2 p.m. on Saturday and Sunday. Smiling patrons begin lining the curbs and sidewalks, vying for the best views, nearly 30 minutes ahead of the lively procession. Riders on high-wheel bicycles and tricycles roll by, followed by carolers, bagpipers, and even stilt walkers like Terrie Dossey Lutke, who plays an eight-foot-tall Living Christmas Tree. Her Majesty Queen Victoria (played by local Anne Boyd since 1992) graciously waves from a flower-adorned, horse-drawn carriage as she’s escorted by a colorful entourage of beefeaters.

Just ahead of sunset, we hop over to Pier 21 to kick off the evening aboard the historic Tall Ship Elissa, moored at the Texas Seaport Museum. In the spirit of the Dickens event, Pier 21 is transformed into the London Wharf and trimmed in strands of lights and holiday decor. Bagpipers play as visitors snack on appetizers and sip cocktails before boarding the Elissa, its main mast adorned with a Christmas tree.

The Elissa is a three-masted, 205-foot-long, iron-hulled sailing ship constructed in 1877, one of the last few remaining seaworthy ships of her kind. Kept shipshape by a passionate team of volunteers, including riggers who climb 90 feet to work the sails, the Elissa continues to sail during annual sea trials in the Gulf.

Walking atop the wood-planked deck and admiring the varnished teak woodwork and network of ropes and pulleys, it’s easy to imagine a time when the Elissa’s dauntless crew braved the high seas, shipping goods to ports all around the world. Museum volunteers aboard the ship, dressed in Victorian-era sailing garb, eagerly answer questions about the history and maintenance of the ship.

Below deck, we browse historical exhibits and pictorial displays that attest to the ship’s 90-year commercial history. As we tour the crew’s quarters and ship’s hold, we hear a ruckus topside, followed by an unexpected BOOM! It scared the Dickens out of us, but it was only the Elissa’s cannon fire salute to sunset—a proper nautical toast to kick off the evening.

We head back over to Strand Street just after dark, in time to catch Pickwick’s Lanternlight Parade—a twilight version of the Queen’s Parade—before heading back to our weekend accommodations at the Moody Gardens Hotel.

Afew miles from the downtown festivities, Moody Gardens’ 242 acres feature the popular Aquarium and Rainforest Pyramids, 3D and 4D theaters, Palm Beach, paddlewheel boat rides, zip lines, a hotel and spa, and seasonal events such as the Festival of Lights (November 14 through January 10, 2016).

On the final evening of our holiday excursion, we take the short walk from our hotel room and stroll mesmerized through the dazzling spectacle of more than 100 twinkling holiday displays with animation and sound, encompassing more than a million lights. The mile-long walking trail winds through tropical waterfront gardens amid a background of lapping waves and panoramic views of Offatts Bayou, Tiki Island, and West Bay in the distance. Luminary displays include larger-than-life toy soldiers, dinosaurs, and Santa, along with a musical animated light show featuring the 12 days of Christmas (turtle doves and all).

We take in the holiday scene as folks glide on an ice-skating rink, hop aboard the mini-train to ride through the trail of lights, and warm their spirits with concessions like hot cocoa and s’mores around a roaring fire pit.

Nearby, Moody Gardens’ ICE LAND: Ice Sculptures with SpongeBob SquarePants, a colorful fantasyland of beautifully sculpted and detailed ice scenes, depicts Nickelodeon’s SpongeBob SquarePants and friends. We don the special winter parka provided and enter the exhibit, which is kept at a frosty nine degrees. The chill quickly wanes as we meander along curving walkways, through tunnels and rooms, up stairs, over bridges, and down slides—all made of ice. Music and sounds emanate from speakers within the ice and colored lights cast everything in a vibrant glow. Kids and families stroll around SpongeBob’s underwater world grinning from ear to ear, seemingly oblivious to the frigid temperatures.

Drawing inspiration from the Harbin International Ice and Snow Sculpture Festival, Moody Gardens flies in an acclaimed team of master ice sculptors from China to carve more than 2 million pounds of ice for the annual exhibit. The team works in shifts 24 hours a day to create a 17,000-square-foot world of ice in just over a month using tools ranging from chainsaws to small picks.

In the center of the display sit three brilliantly illuminated ice slides, which my wife and I test several times, racing each other down the slippery, 100-foot slopes. Standing atop a slide before taking my final plunge, I take in a panoramic overview of this icy scape in all its glory.

With Galveston’s imaginative and whimsical abundance of holiday events, festivals, and shows from Thanksgiving through December, I’m betting even old Ebenezer Scrooge would crack a smile on this winter wonder island.